Destination Abruzzo: the Region That Has It All!

Destination Abruzzo! Just a few hundred kilometers from Rome, in the center of the Italian peninsula, immersed between sea and mountains lies the region of Abruzzo. Ideal for sportsmen and nature enthusiasts, foodies and connoisseurs, Abruzzo is the perfect destination for families, friends, couples, and retirees! Here are just five amazing aspects of the region.

Its cuisine that resembles home-cooking and varies depending on the geographic proximity to the sea or mountains will satisfy even the toughest critic.

Its cuisine, like Abruzzo’s territory, varies significantly from the coast to the inland areas. In the latter, meat, especially lamb and pork, reigns supreme.

Arrosticini, skewers of lamb cooked on the grill using a brazier (furnacell in local dialect) is certainly Abruzzo’s most famous dish.

Abruzzo also has a long tradition and history of preparing fresh pasta. For over 200 years grandmothers have been making homemade Spaghetti alla chitarra (guitar) for Sunday family dinners. The noodles are named after a guitar-shaped tool that’s used to shape them. Their shape and texture allow the sauce to perfectly coat the noodle.

The Abruzzo region has also become, for all intents and purposes, a wine region in which the quality of wine production is widely achieved not only by large producers but also by small local businesses.

Already famous in terms of gastronomy, Abruzzo stands out among the regions of central Italy for the many native red grape varieties, such as Montepulciano, and white, like Trebbiano. 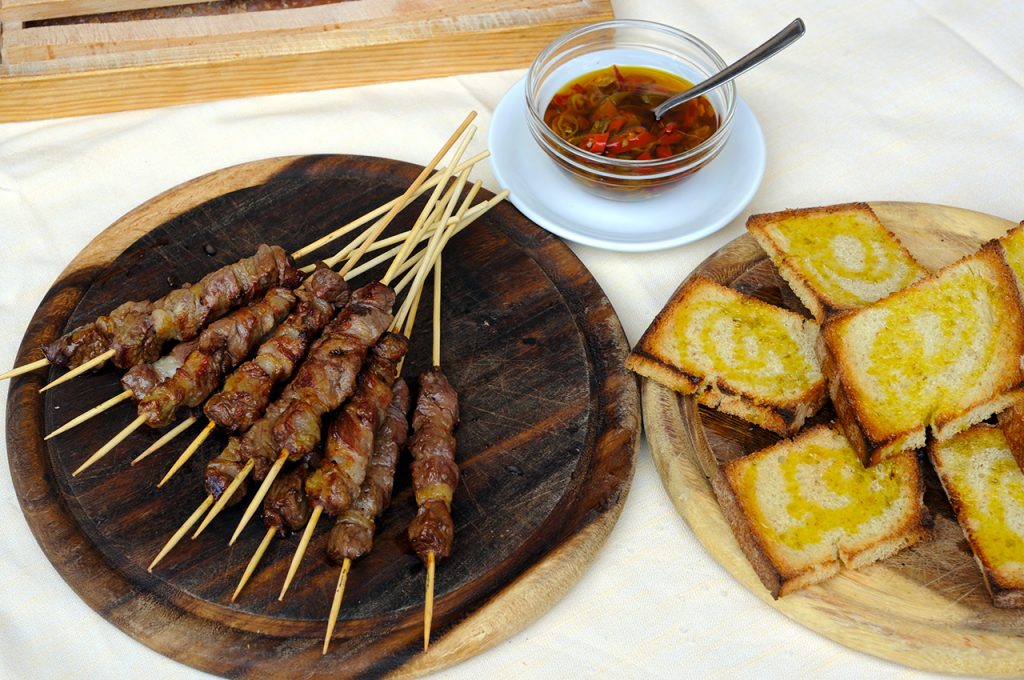 The long stretches of sandy beach along the Adriatic characterize the coast of Abruzzo and receive the Italian Blue Flag Award of recognition for their pristine, unpolluted waters.

From Alba Adriatica to Pineto, from Pescara to Vasto, the Abruzzo coast has a great variety of beaches.

The beaches of the Abruzzo coast have an additional feature- charm. Old fishing villages look out onto Gran Sasso‘s profile that appears out in front of the sea. The Teramo area, on the other hand, is hilly and marks another very special encounter of the Italian coasts, between the sea and the countryside.

The most beautiful beaches in Abruzzo are located along the stretch of the Costa dei Trabocchi. You’ll see ancient fishing methods on stilts which are typical to the area. 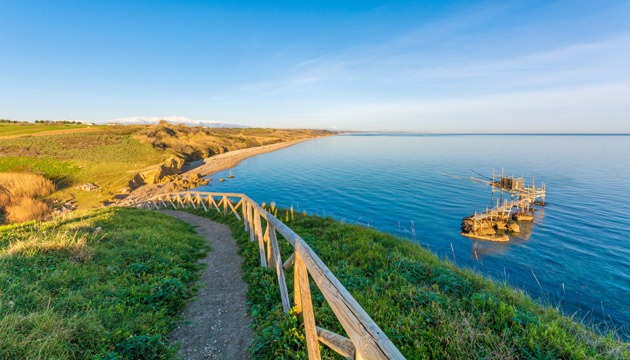 Other regions of Italy have nothing on the natural beauty of Abruzzo!

Many of its seven picturesque lakes, in addition to the breathtaking views, offer services and facilities for lovers of water sports such as rafting and canoeing.

Lake Bomba, Lake Scanno, and Lake Barrea are among the most beautiful in the region, surrounded by mountains and winding roads that frame the wonderful mirror of water.

With their mountain landscape, cities such as Roccaraso, Castel di Sangro, Ovindoli, and Campo Felice represent must-see destinations for skiers and mountain lovers.

In the warmer months, the hiking trails in many of these cities are perfect for those who love the great outdoors. Some of the best are found in the Abruzzo National Park and in the Majella National Park.

Away from the crowds of the most famous and renowned medieval cities of Italy, places like Pescasseroli, Rocca Calascio, Santo Stefano di Sessanio, and Pacentro offer even more authentic experiences and breathtaking landscapes, some even with castles that can still be visited.

One of the most characteristic castles is Rocca Calascio which boasts a watchtower from the 10th century and at almost 1,500 meters above sea level, remains the tallest fort in all of Italy.

Abruzzo is considered the greenest region of Italy because of the number of national parks within its borders and because most of its cities are framed by mountain ranges as their backdrop.

With its great food and excellent wine and its astounding natural beauty, the Abruzzo region is a unique destination in any season. This exquisite land wedged between the sea and mountains offers a perfect holiday for travelers of all ages.