Pacentro: the Medieval Village in Abruzzo that Will Always Hold a Place in My Heart

Picture it…an American girl that had just graduated from high school, and had never been anywhere outside of the States, decides to go off to a “foreign land” on the adventure of a lifetime. College can wait, but this opportunity can’t. A chance to spend a year in a little mountain village in the middle of the Abruzzo region with my best friend- this would be life-changing. This wasn’t a random choice. Her father was from this town and she was deeply tied to it. And so after convincing my parents, the adventure began in Pacentro. 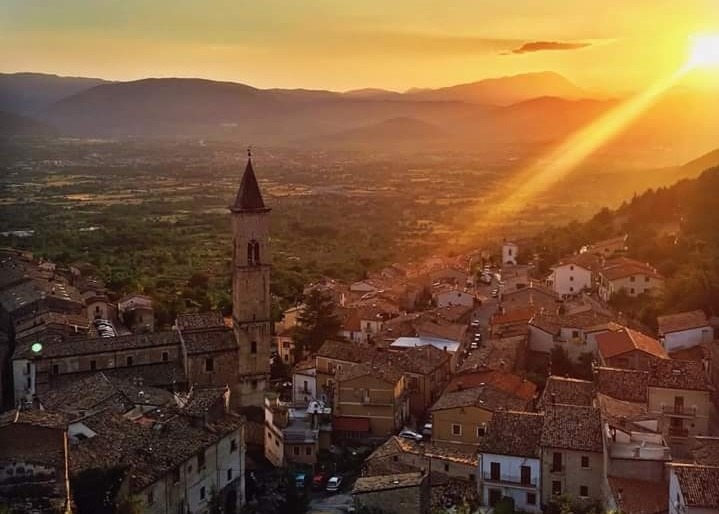 It was August and the perfect time to visit this little hamlet nestled in the Apennines. With a population of just 1,200 people, known as “Pacentrani“, the town swells with returning locals and tourists in the late summer months. Most of the younger generation leaves the village to study at the University of L’Aquila or elsewhere, and often times, move away permanently for work. One thing they all have in common is the immensely powerful bond to this village. Wherever life takes them, their heart stays in Pacentro. There was also a mass emigration just after World War II when Pacentrani fled to the U.S., Canada, Australia, Venezuela, and other European countries. At an elevation of over 650 meters, the winters here are also harsh. All of these factors led to under-population, but you wouldn’t have known it in the summer of 1994.

To me, at a naive 17 years-old, it seemed that I was at the epicenter of the world and that everyone had reunited here as if drawn by a magnetic force. It was paradise. The warm days and cool nights, the cobblestone streets, the stone arches, the old women dressed in all black, the strange dialect- it was like something out of the pages of National Geographic and unlike anything I had ever seen.

I spent that August making friends from all over the world; singing songs in English with my new Italian friends in the open air; sipping lemon soda at the bar in the piazza until the wee hours of the morning; dancing under the moonlight and tasting “real” food for the first time ever. It was the first time I tasted homemade pasta and sauce that had been simmering on the stove for the entire day, if not longer. Actually, before I met my Italian-American friend and traveling companion, I couldn’t pick out a rigatoni from a penne in a pasta lineup.

I was young so I don’t remember being interested in the history of Pacentro, but since that summer so long ago, Pacentro has put itself on the map and is now one of the “Most Beautiful Villages in Italy” (although Pacentrani already knew that long before the official title was given!). Low and behold, there is a lot to see too! 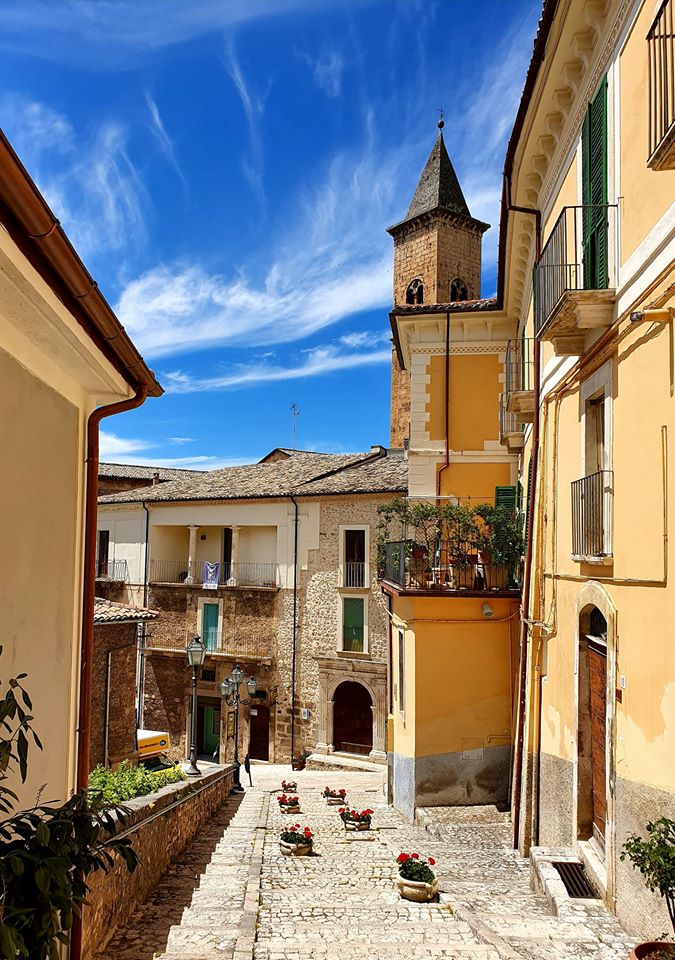 Pacentro’s Caldora Castle dates back to the 14th century and originally had four towers (three of which are still intact), although there was already a castle here as early as the 10th century. It was erected to defend the Peligna valley from the Arab and Norman raids.

The Palazzo la Rocca has a museum housing various artifacts from Pacentro including coats of arms and ancient cannons used as early as the 16th century.

Located near the castle, the Canaje is a unique sight in that it was an ancient public bath made of stone slabs. Women would wash clothes and then carry copper pots on their heads filled with fresh, mountain spring water before there was running water in homes.

Don’t miss the preta tonna which is a large, hollowed-out rock that was used to measure grain. It is also known as the pietra dello scandalo (the stone of shame) because those who didn’t pay their debts were forced to sit here nude to be publicly ridiculed. 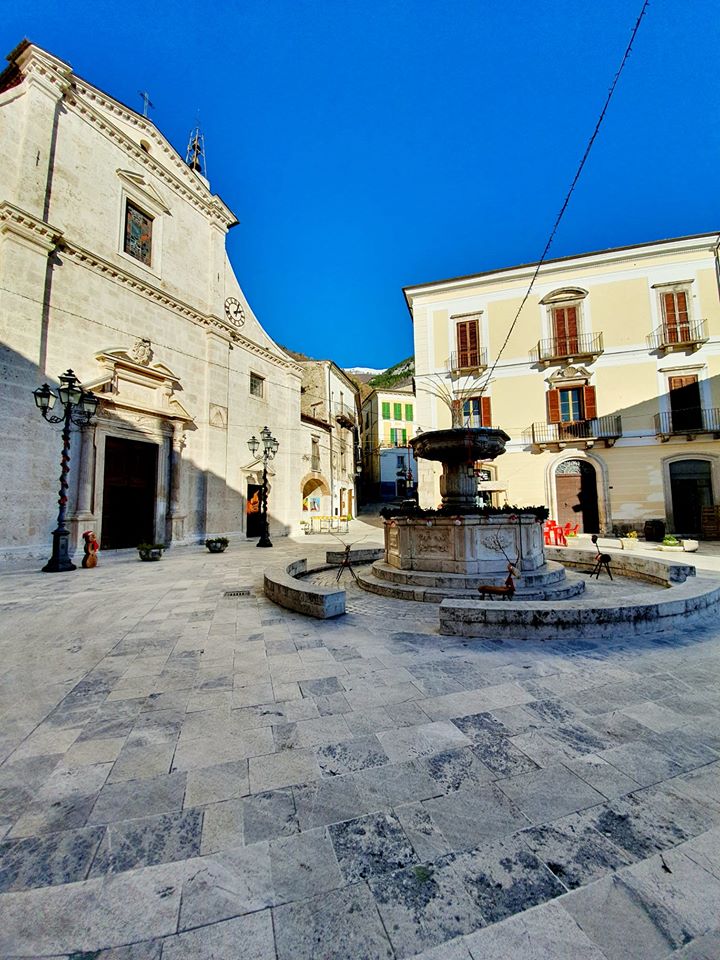 Despite being such a small town, there are numerous churches. The Chiesa Madre or the Santa Maria Maggiore della Misericordia is Pacentro’s main church. It dates back to the 15th century and holds the relics of the town’s patron, Saint Crescenzo. In the same piazza, you’ll find the Sede del Parco della Maiella which houses various exhibitions throughout the year and where you’ll also find souvenirs and handcrafted items from the area.

San Marcello Church is the oldest in Pacentro dating back to the 11th century. The original frescoes are still visible on the facade.

Located within the historic center, the Convent of the Immaculate Conception is a baroque church that was founded by Franciscan monks in the 16th century.

Another must-see is the much “newer” Madonna di Loreto Church (17th century) which is believed to have served as a refuge for the Knights Templar on the way to the Holy Land. It is also at the center of the town’s most famous festival- the Corsa degli zingari– held in September.

In fact, this famous celebration is both a race and a sign of extreme devotion to faith and tradition. It is believed that it dates back to pre-Christian times when the farmers and shepherds would make sacrifices to the gods in exchange for protection and an abundant harvest.

In the local dialect, the word zingare actually means “nude” whereas, in standard Italian, it refers to a nomad or a gypsy. If you’ve guessed the race is run in the nude, you’re close; but actually, it’s run barefoot! This extreme race by anyone’s standards begins in the mountains above Pacentro at the Ardingo rock. When the church bells ring, the participants trample their way downhill over jagged rocks and brush until they reach the Madonna di Loreto Church bloody feet and all.

Historically, the race was a coming of age for boys and the winner was viewed as a prime candidate for marriage. Today, there are certain qualifications you must meet if you want to participate such as being male, a Pacentrani (either by birth or with family ties), or owning a home here if you’re “foreign”. Participating is still a source of pride and draws thousands of tourists for the massive celebration. 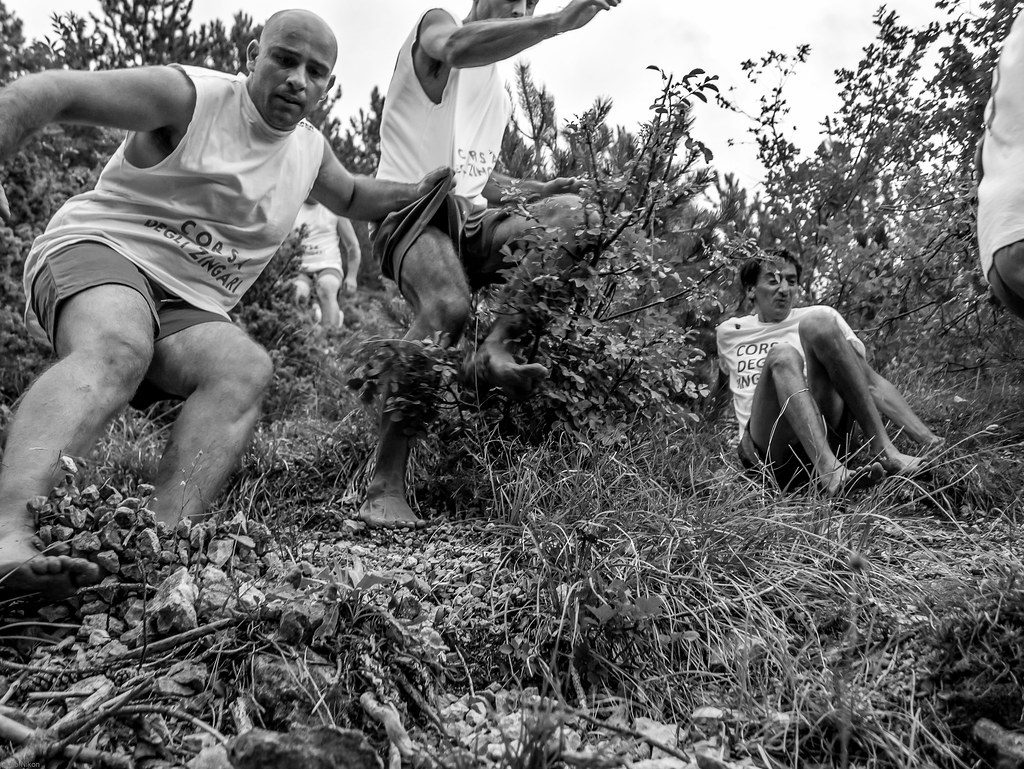 ©”Start” by Giulio Gigante is licensed under CC BY-SA 2.0

Other festivals include Caldoreschi which is a medieval reenactment during the month of August that lasts several days as well as the living Nativity along with the Christmas markets in December. Pacentro is also very well known for its fine craftsmanship of terracotta and many of the artisan Nativity scenes are constructed using this technique.

Handpainted hot air balloons are launched into the air in October for the festa of the Madonna del Rosario, and again in November in honor of San Carlo Borromeo.

The best way to visit Pacentro and the surrounding area is definitely by car. Transportation in the mountain villages is still somewhat limited and having your own car gives you much more freedom to visit other nearby spots.

If you’re outdoorsy or just simply love nature, you will be in heaven here. The possibilities for mountain hikes away from hectic daily life are truly endless.

Some of my favorite places to visit are Majella National Park (Pacentro is actually located within the Park), the Zipline Majella, the city of Sulmona, and the nearby villages of Scanno, Caramanico Terme, and Bugnara (all three also made the “Most Beautiful Villages of Italy” list!).

What to Eat (Everything!)

Cuisine in Pacentro is based on local agriculture, especially lamb. Arrosticini (skewered lamb roasted on the fire) are popular throughout the region, as is a smoky cheese called scamorza (delicious melted over a fire), and ricotta made from both sheep and goat’s milk.

Pasta types include homemade maccheroni alla chitarra served with a rich, red sauce that typically includes lamb, pork, or veal (or a combination of all three) and tiny meatballs. La polta is perhaps the signature dish which is simply cabbage and potatoes sauteed in olive oil and peperoncino with beans.

Madonna‘s (Madonna Louise Ciccone) paternal grandparents are from Pacentro! There are still residents here with the last name Ciccone. US Secretary of State Mike Pompeo‘s grandparents were also from Pacentro. He recently made a visit and was greeted with a grand Pacentrani welcome! In antiquity, the famous poet Ovid was from Sulmona. 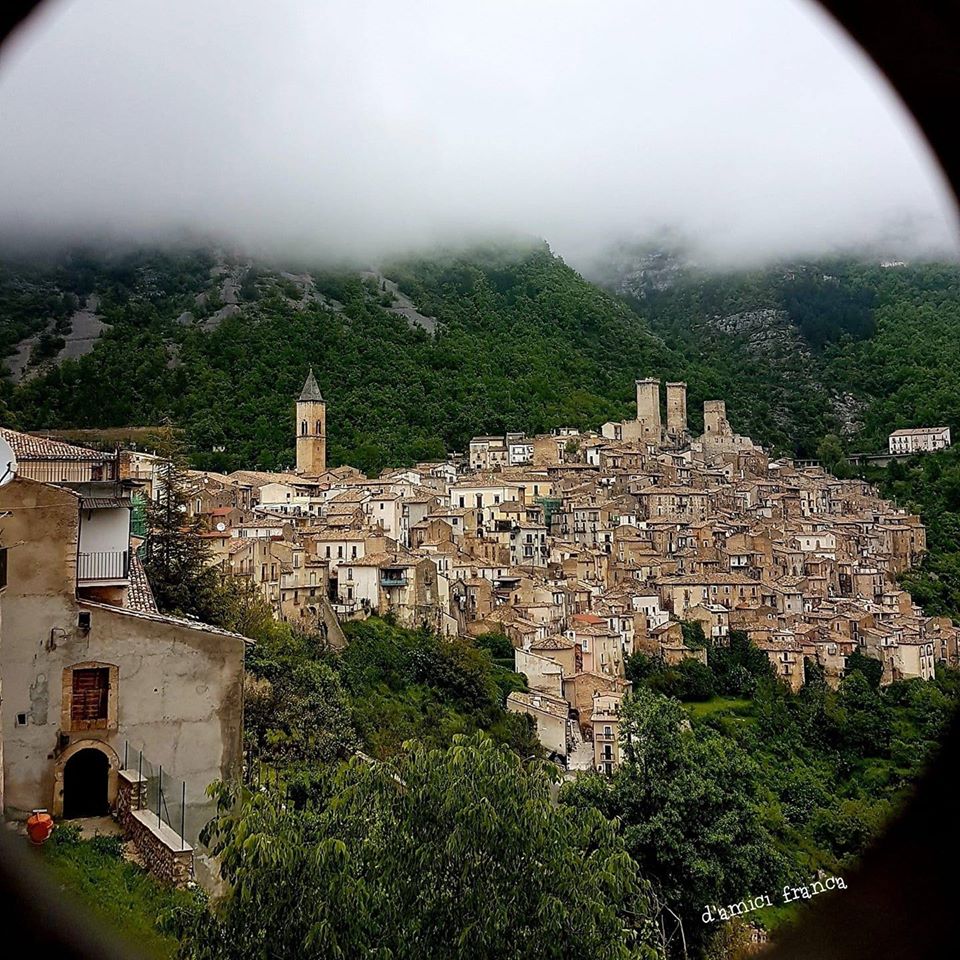 The summer of ’94 in Pacentro will be forever ingrained in my memory- every single part of it- its scents, its flavors, its music, its faces. It was all so overwhelming and yet so very simple. Pacentro will always hold a very special place in my heart and someday, I’ll go back and I’m guessing, not much will have changed. And that you see, is a very good thing.