The mountain villages in the Abruzzo region are synonymous with authenticity, intrigue, history, and breathtaking landscapes. Castel del Monte in the region’s L’Aquila province is all of this and so much more. Come with us as we explore this hamlet of under 600 people and find out about one of its most popular events, la Notte delle Streghe, or the “Night of the Witches”.

Castel del Monte (not to be confused with the castle of the same name in Puglia) sits at 1,346 meters (4,416 ft) above sea level in the Apennines. It’s located within the Gran Sasso and Monti della Laga National Park, certainly one of the largest and most beautiful in all of Italy. It has also been inducted into the prestigious club of one of the “Most Beautiful Villages of Italy” or I Borghi più belli d’Italia.

While that is an impressive title by today’s standards, archaeological finds tell us that Castel del Monte has been inhabited since the 11th century BC. Over the past 700 years or so, ruling families such as the Counts of Acquaviva, the Sforza, Piccolomini, and even the Medicis have left their mark throughout the small town and surrounding area.

Castel del Monte is camouflaged on the mountain as if it were a complex puzzle with each rooftop and tower a piece of the mosaic. Unlike many medieval villages, here there were no true walls to protect the town. Instead, Castel del Monte’s defense was its four towers and five gates which are positioned around its densely compacted layout. 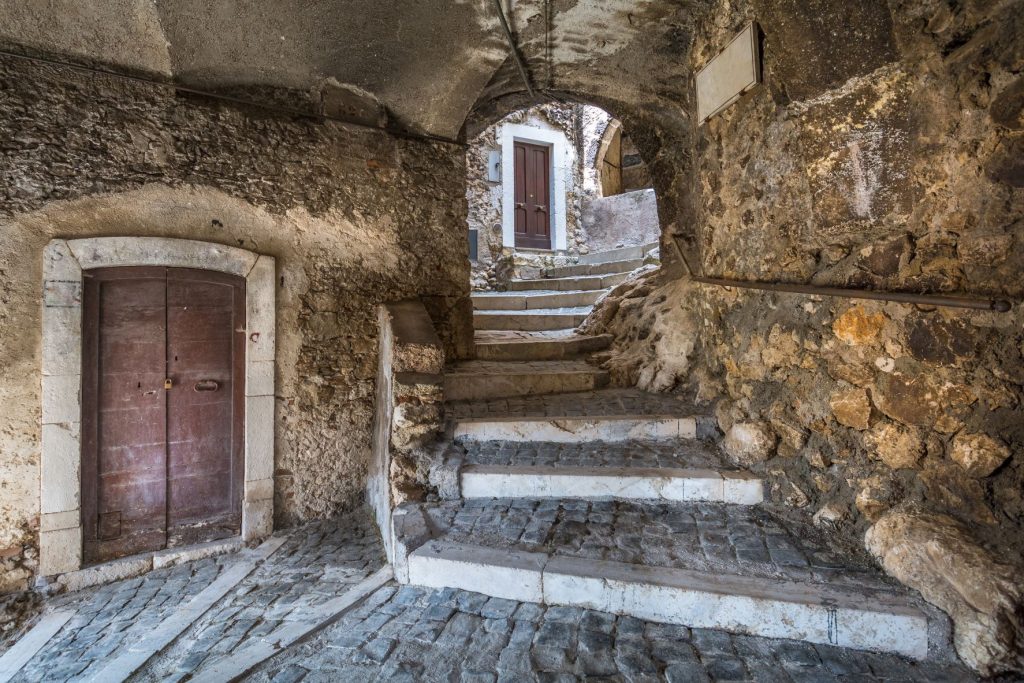 If you know anything about architecture, you will be in awe of the way the town was constructed out of stone. Something that is quite particular about this village are what is known as sporti in Italian or arches carved into the limestone that connect the various residential areas of the village.

The best way to visit this magical town is to simply wander its narrow alleys and zig-zag under its arches. Let the colorful murals and mosaics that embellish the entire historic center be your guide. The artwork tells the story of Castel del Monte from its peasant traditions to its legends and folklore.

Surprisingly, there are a total of 9 museums in this quaint village. Many recount the ancient agricultural traditions that are still practiced to this day such as wool and cheese production as well as transhumance (or the seasonal practice of moving livestock). 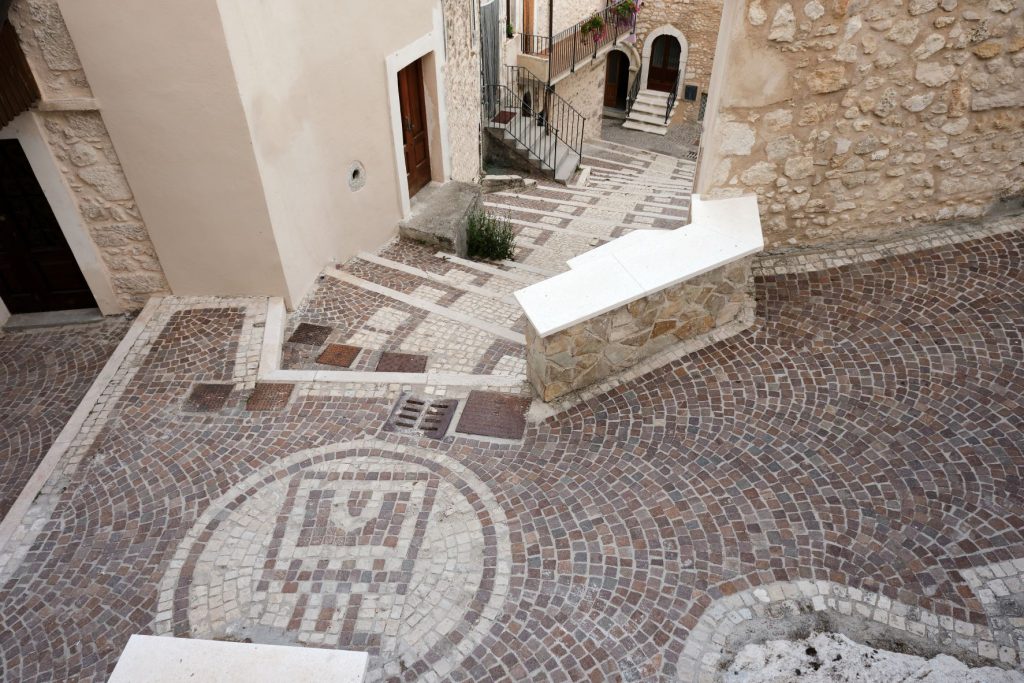 Some of its Churches

The Chiesa Matrice di San Marco is the oldest church in the village and in its original form was likely a simple chapel annexed to the castle. Fourteen side altars are all in stone and date to the 15th and 16th centuries.

Deeply tied to the pastoral traditions is the Church of the Madonna del Suffragio with its magnificent painting of St. John the Baptist commissioned by Prince Francesco Antonio dei Medici and painted by the Florentine artist Bernardo di Lorenzo di Monaldo in 1585.

It isn’t surprising that in an isolated place such as Castel del Monte ancient customs and rites would have been an integral part of life. In fact, its most well-known event is called La Notte delle Streghe or the “Night of the Witches”.

The “Night of the Witches”: Only in Castel del Monte

The rito de re sette sporte in the local dialect is a mystical celebration that dates back hundreds of years and was still in practice up until the 1950s. It was believed that when a child became ill a witch had snuck into the home and cursed it. In order to cure the child, he would have to be watched over for nine nights and then his clothing would be taken in a procession led by the mother, the godmother, and other women. This rite had to be done in total silence and they had to pass underneath seven sporti or jetties until they would finally beat the child’s clothing and set it on fire thus driving out the witch and the illness.

Since 1996, the local cultural associations have been handing down this unique custom to the younger generations through historical reenactments and festivities that take place in mid-August. The 2022 edition will take place from the evening of August 16th through August 18th and includes a market with local products, folk music and dance, theater performances, street artists, and of course, the moving reenactment of the ritual itself. 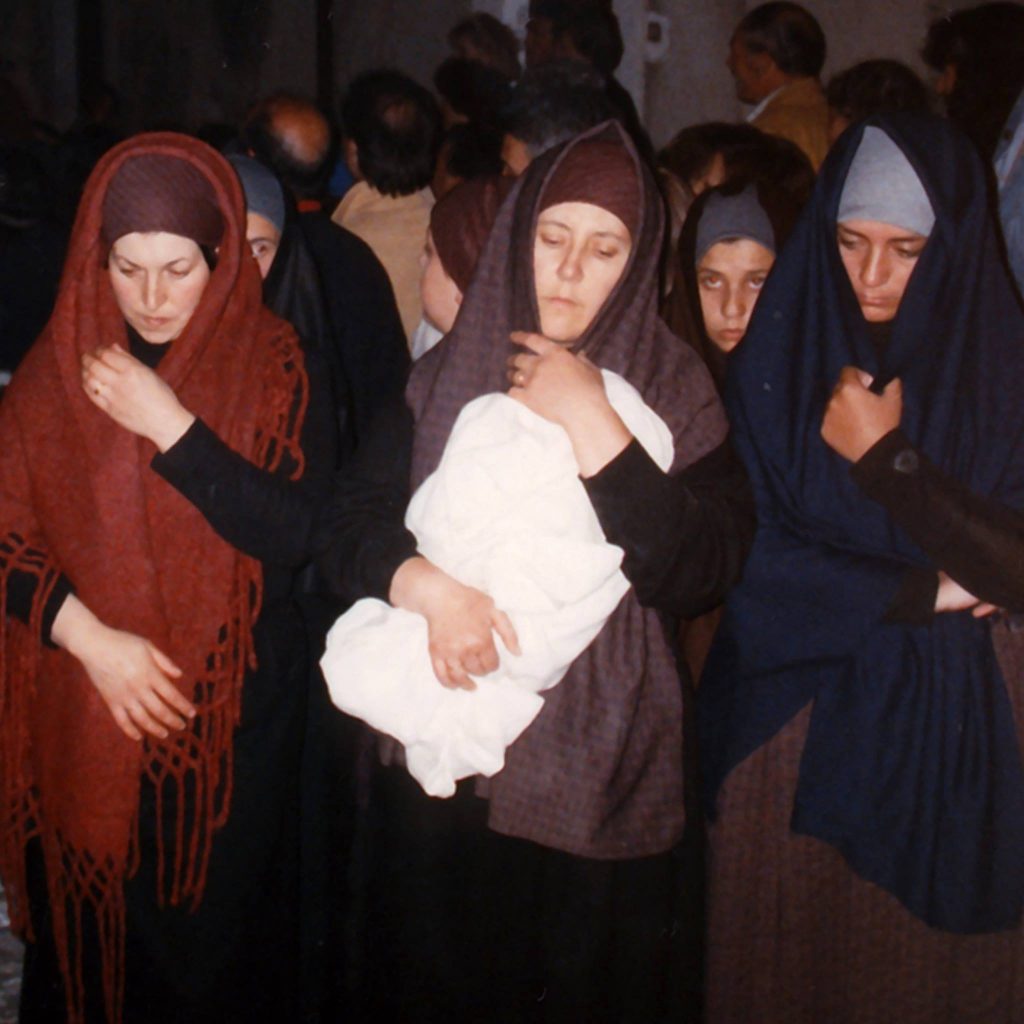 We’re certain that once you’ve visited this enchanting place where time seems to have stood still, you too will be bewitched by Castel del Monte.

Besides the Gran Sasso National Park, other incredible destinations in the vicinity include Rocca Calascio, Santo Stefano di Sessanio, Stiffe Caves, and Pacentro.

Post Views: 126
Redattore
Catania: A Perfect Mix of Culture, History and Sea
The Palio of Siena