The Medieval Village of Santo Stefano di Sessanio in Abruzzo

At 1,250 meters above sea level (4,100 feet) the ancient village of Santo Stefano di Sessanio watches over the Gran Sasso mountain in central Abruzzo. By now, the secret is out that the Abruzzo region is one of the most desirable destinations in all of Italy. In particular, in the l’Aquila province, visitors can still get an increasingly rare glimpse into an authentic Italy. Let’s find out more about this unique destination and why it has been chosen as one of the “Most Beautiful Villages in Italy”. Andiamo! 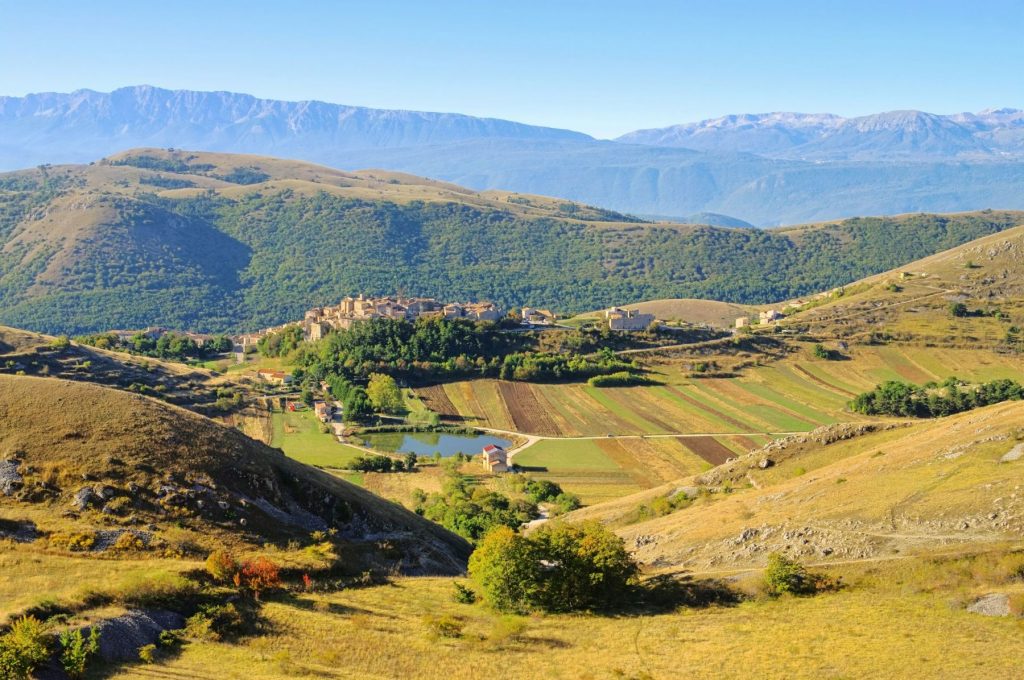 Sextantia: From the Romans to the Medici

We are about two hours east of Rome and just 30 minutes from the capital city of Abruzzo, l’Aquila. Santo Stefano di Sessanio also happens to be located within the boundaries of the Gran Sasso and Monti della Laga National Park, one of the most beautiful in all of Italy, and right on the edge of the expansive Campo Imperatore plateau.

In Roman times the village was called Sextantia and referred to the number of Roman miles between it and the important city of Peltuinum, a crossroads between Rome and the Adriatic Sea. The town as we see it today dates to as early as the 11th century and is a result of various ruling families including the Carapelle, Piccolomini, and even the Medicis. Of all of these, the Medici rule was the most influential and their coat of arms can still be seen above the entrance to the town. During this time, Santo Stefano di Sessanio produced black wool known as carfagna which was even used by the military.

The Rebirth of the Village in the New Millennium

In 2009, a massive earthquake struck the region killing over 300 people and destroying countless historic buildings and residences. The Medici tower, the very symbol of Santo Stefano, was reduced to rubble. Even prior to the earthquake, the population of the village had dwindled to under 100 residents. 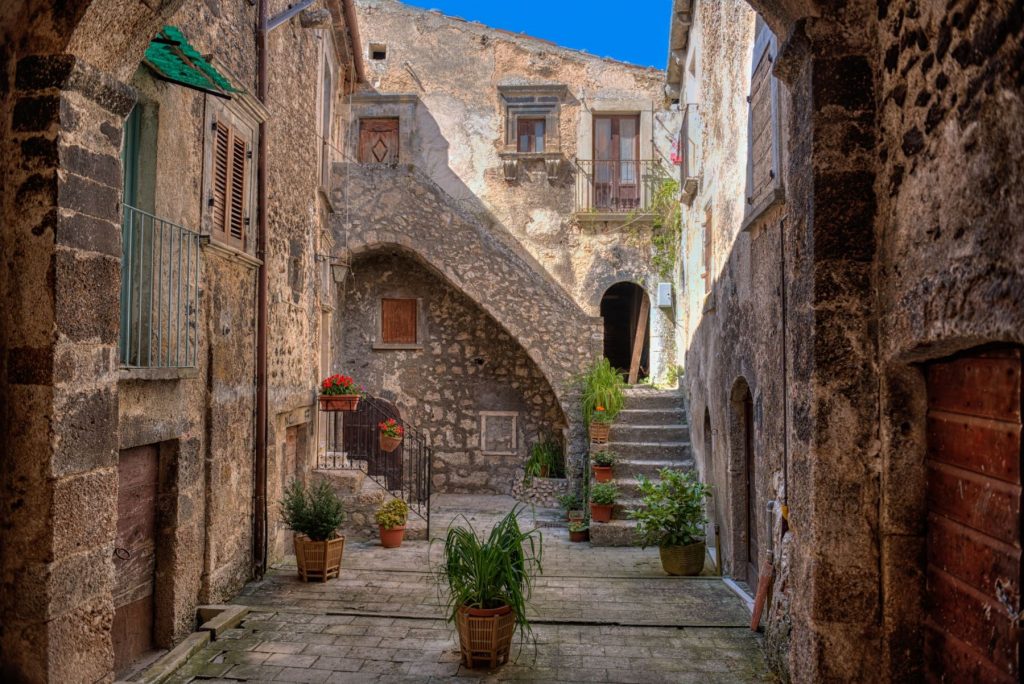 Since about the year 2000, it has been experiencing a rebirth thanks to various initiatives, investments, perseverance, and its infinite charm. In October of 2021, the newly rebuilt Medici tower was revealed symbolizing the amazing spirit of the locals. The natives here describe themselves as “strong, mountain people” who do not give up easily. The agricultural and pastoral traditions have endured here for over 3,000 years.

What to See Here

Sessanio’s white limestone buildings rise up seemingly out of nowhere and it isn’t difficult to imagine what life must have been like in the Middle Ages, or even earlier. There is parking for your car once you arrive, but you will want to explore the village on foot (comfortable shoes are a must!).

Some would say that referring to the village’s tower as the “Medici” tower is a misnomer in that it was actually built in the 13th century but further embellished under Medici rule. Regardless of to whom credit is due, the view from the top is absolutely breathtaking.

The church of Saint Stephen the Martyr (for whom the town is named) is actually located just outside the village walls and dates to the 12th century. It underwent a massive renovation in the mid-1700s after the earthquake of 1703.

Within the town walls, you’ll find the Medici chapel which dates to the 1700s. It was heavily damaged in the 2009 earthquake and originally had a stone facade. The Medici palace is one of the most striking buildings still standing in the village with its two ramparts and loggia dating to the 15th century and Baroque period.

Just outside the town center and near the Santo Stefano lake, don’t miss the chapel of the Madonna del Lago, or Mary of the Lake which dates to the 1600s.

If you are planning to enjoy hiking or horseback riding during your visit, then the best time to plan your trip is between the months of April and October. At this altitude, even at the height of summer, temperatures are a pleasant 25° C. The Ippovia del Gran Sasso is the longest horse trail in all of Italy covering 300 km of stunning landscape within the national park. One of the most popular hiking trails is the Santo Stefano di Sessanio- Rocca Calascio loop which is a 3-hour hike departing from Santo Stefano di Sessanio and winding past the Madonna dei Monti Oratory and then to the magnificent Rocca Calascio castle.

In the wintertime, the village is blanketed by snow adding to the already magical atmosphere. You can enjoy all kinds of winter sports at the nearby Campo Imperatore ski area and in the park, in general.

If you’re coming to enjoy the views, then spring to mid-June might be your best bet when first, the lentil fields are in bloom, and later, the crocus fields (cultivated for the prized spice, saffron).

Likely, everything you taste in Santo Stefano di Sessanio will blow your mind, but do not leave without having tasted the town’s specialty, lentils. They are typically served with crusty, toasted bread doused in olive oil and sometimes potatoes or sausage. Lamb skewers (arrosticini) and sheep’s milk cheeses are another delicacy of the area, especially ricotta and aged pecorino.

If you choose to stay overnight here, you can experience one of the most remarkable “hotels” in the region, if not in all of central and southern Italy. Known as a hotel diffuso in Italian, the Sextantio is approximately 25 homes that have been converted into lodgings located throughout the village. Wrought iron keys, stone hearths, wool mattresses, and handmade linens are just some of the features of these purely authentic rooms making for an experience you won’t ever forget.

Post Views: 370
Redattore
Venetian Villas Along the Brenta River
The Village of Tricarico: Delving Into the Heart of Basilicata