The Ancient Umbrian Town of Spello

Spello is a picturesque Umbrian town near the more well-known town of Assisi in the province of Perugia. This medieval town is surrounded by walls and today, is probably most known for its famous flower festival, the Infiorata. We assure you that this village is definitely worth visiting for so many reasons! 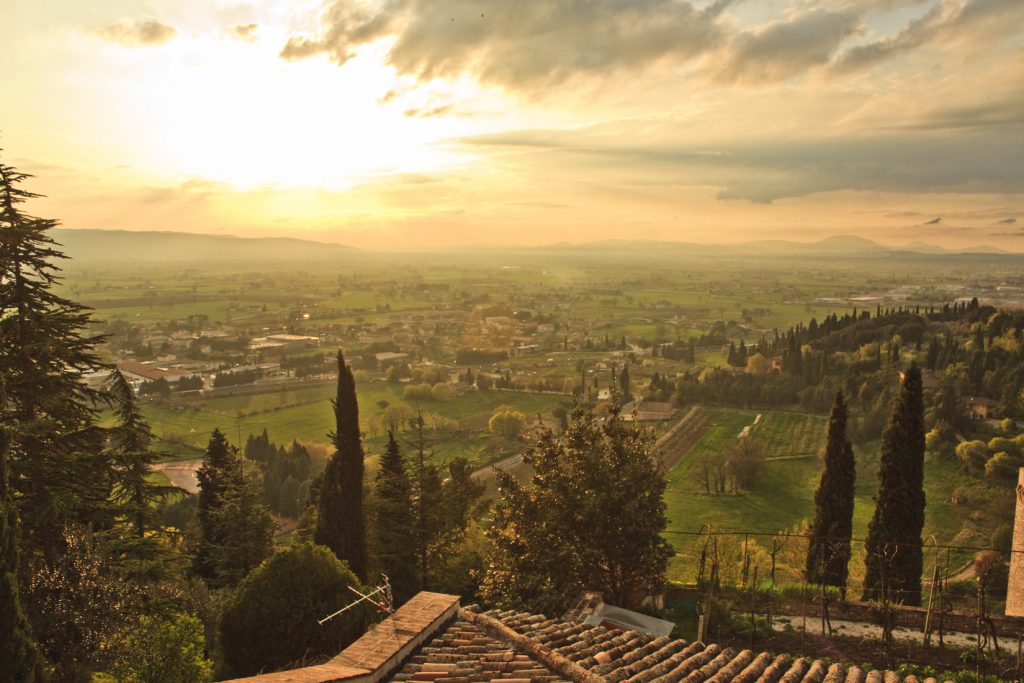 At the foot of Mount Subasio in the Valle Umbra lies the lovely hamlet of Spello. Recognized with both of the most prestigious titles in Italy, Spello is one of the “Most Beautiful Villages in Italy” and is an “Orange Flag” town awarded by the Italian Touring Club.

This city’s walls actually date to Roman times and in fact, three of the gates or porte (Porta Consolare, Porta di Venere and the Arch of Augustus) are still intact. Porta Venere with its Properzio Towers are symbols of Spello and date to Emperor Augustus’ rule (although numerous restorations have taken place over the centuries). There is also the remains of a Roman amphitheater dating to the 1st century AD.

The famous Renaissance painter known as Pinturicchio (or Pintoricchio) is often associated with Spello and Perugia. Perugia was his birthplace and one of his most prized works can be seen in Spello’s Santa Maria Maggiore Church. A series of his priceless frescoes are held within its Baglioni Chapel. 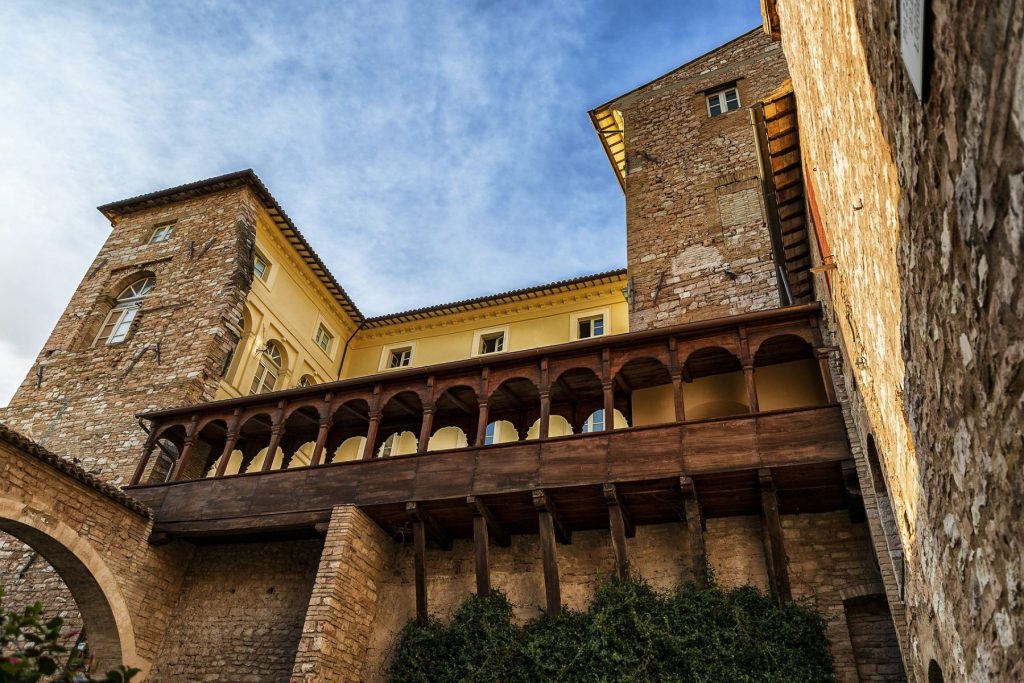 Other Churches to See

The Romanesque Church of Sant’Andrea also holds an altarpiece by Pinturicchio and beautiful 14th-century frescoes. If you enjoy frescoes then the Church of San Lorenzo is also a must-see. Located in Piazza Umberto I, San Lorenzo dates to the 12th century.

As you reach the “upper” part of Spello’s historic center, you’ll see the remains of the fortress or the rocca. The views from this area are breathtaking and today, there is also a Capuchin monastery with its Romanesque Church of San Severino.

Near the Porta di Venere, there is another Romanesque Church of interest called San Claudio. The original structure was supposedly dedicated to the Roman god of Saturn and its rose window is positioned on an asymmetrical facade. Inside, there are stunning frescoes dating to the 14th century.

Other main attractions within the historic center is the Spello Art Gallery (Pinacoteca civica e diocesana) located within the Palace of the Canons of the Collegiate (Palazzo dei Canonici) which holds priceless works from various centuries. 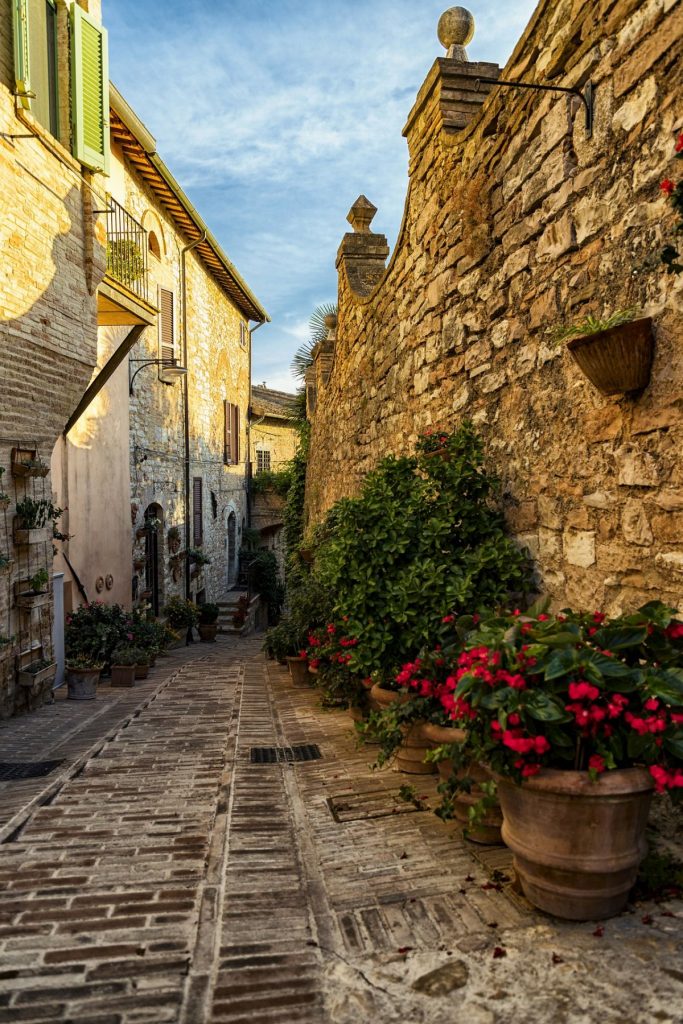 Within the Palazzo Comunale visitors will find ruins of the Roman amphitheater and an actual marble known as the Rescritto of Constantine (an actual reply to the people of Spello by Constantine himself). The Palazzo also houses the museum dedicated to the Infiorato flower festival as well as the Emilio Greco Museum.

One of the most remarkable sights in Spello is definitely the only recently discovered (2005) Villa of the Mosaics. Just outside Spello’s walls, in Sant’Anna, a total of 500 square meters have been uncovered revealing fantastic mosaic floors dating from 27 BC to the 3rd century AD. With one single Umbria Terre museum ticket, visitors can gain entrance to a total of 12 Umbrian museums for one very low price. Highly recommended!

As previously mentioned, Spello’s most famous festival is the Infiorata which is held every year on Corpus Domini or Corpus Christi (ninth Sunday after Easter, in either May or June). Artists work the entire year to create amazing tapestries with flowers that were exclusively picked in natural settings, not cultivated.

Surrounded by inviting landscapes, Spello is also the perfect place for outdoor activities like hiking, horseback riding, and mountain biking. The Parco del Monte Subasio has numerous trails for all types of hikers. In the immediate area, you can also visit the lovely village of Rasiglia known as “Little Venice”.

While you’re visiting, you won’t want to miss tasting Spello’s most famous culinary traditions. Spello is best known for its high-quality olive oil still cold-pressed as it has been for centuries. Try it drizzled over a rustic piece of grilled bread that’s been brushed with garlic (bruschetta). Legumes such as lentils and chickpeas as well as grains are also cultivated here and many dishes have these as their base. Black truffles, as well as Chianina beef, wild boar, and other game, are also on the menu. Wines include reds, whites, and rosès.

Post Views: 1,219
Redattore
Tavolara Island off the Coast of Olbia, Sardinia
The Island of Pantelleria: Kissed by the Sun