What to See in Aosta in a Day

Aosta is Italy’s smallest city. Nestled in the Alps, this little Alpine treasure is a fabulous place to visit. Let’s find out what to see in Aosta in a day.

Aosta is also known as the “Rome of the North”. This nickname derives from its ancient Roman origins. The town was built to strengthen Roman control in northern Italy and it still bears witness to this today.

As soon as you arrive in the city you will find yourself in front of the Arch of Augustus. This is the undisputed symbol of the Roman Aosta. The Arch of Augustus is among the most important Roman remains in Aosta. Decorated with reliefs, it was built in 25 BC to commemorate the victories of Roman troops. The arch is located near the Buthier River on the Via delle Gallie which once joined Italy and France.

Coming from the Lower Valley, you will cross the Roman Bridge. The bridge crosses the ancient Buthier stream which actually changed its location during the Middle Ages. The Roman Bridge is so perfectly preserved that the support beams are still visible. Popular beliefs attribute its construction to the devil.

After passing the Arch of Augustus, you will immediately come across Porta Praetoria. It is the monumental gate located in the eastern part of the city of Aosta. Perfectly preserved, the door presents itself to the visitor with a series of three arches: a larger one in the center and two smaller ones on the sides. The central arch was intended to accommodate wagons, while the other two were used by pedestrians. Above the arches are the towers, where the sentinels paced to and fro to guard the community. Porta Praetoria is probably the largest Roman gate ever found.

Continuing from Porta Praetoria, you’ll come across the Roman Theater. It is one of the greatest masterpieces of Roman architecture. Unfortunately, all that remains is the facade of the building with its arches and windows so typical of this historical period. There is little left of the interior of the theater. Of the numerous levels destined to welcome the public, only six are left in addition to the two that were designated for the orchestra. Only the foundation of the scene remains. Scholars think that thousands of people could have been accommodated here to enjoy the shows.

From here, you can’t miss the view at the Crypto Portico Forense. This is another testimony of the Roman Empire. It was the connection point between the two temples dedicated to Jupiter and Emperor Augustus and Juno and Minerva. 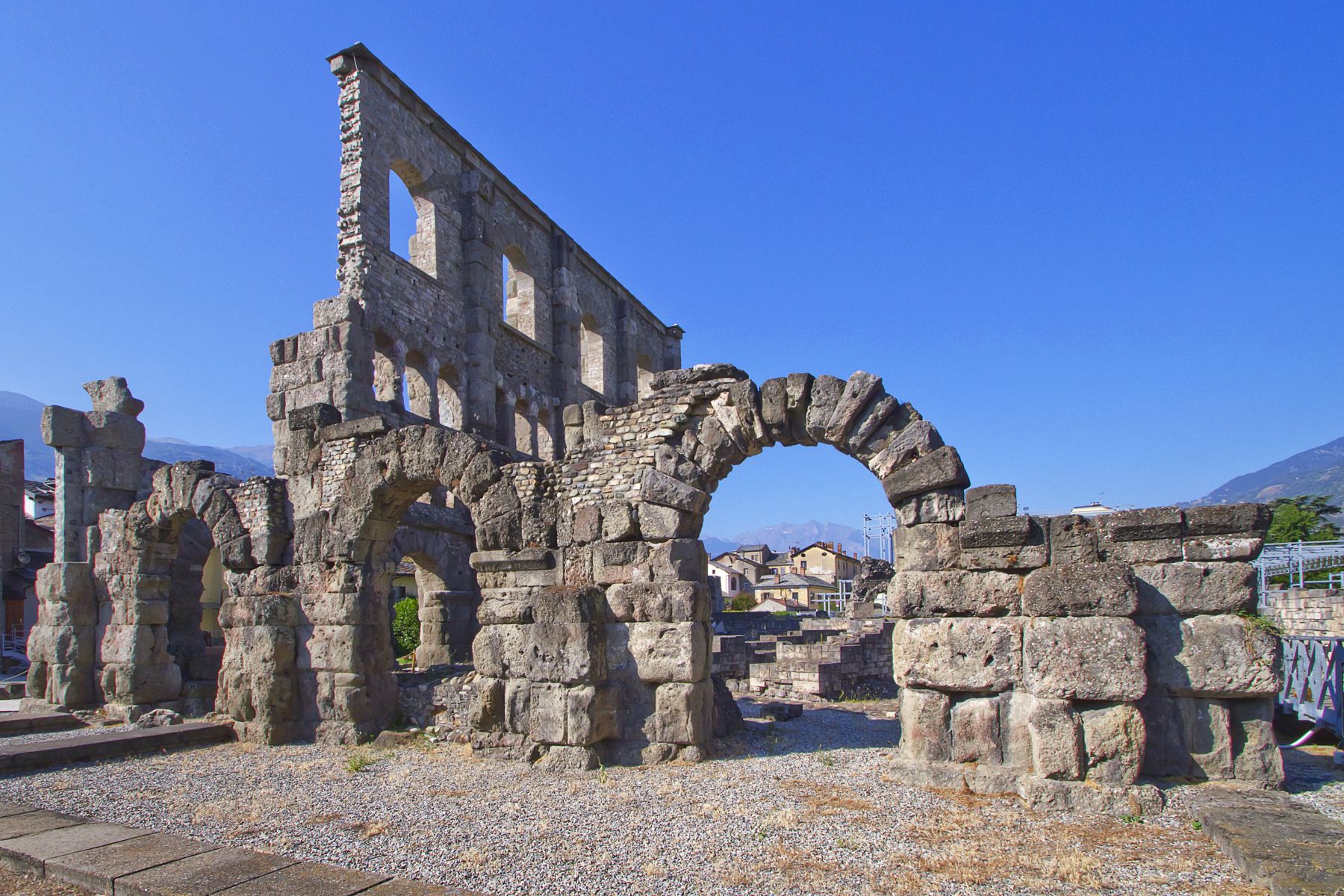 Continuing through the historic center of Aosta, you will reach the town’s main square: Piazza Èmile Chaunoux. It is located right in the central area and was once called Piazza Carlo Alberto. Later, it was named after a martyr killed in the Nazi-Fascist period. You’ll find many important buildings such as the Town Hall (Hôtel de Ville) and the house of Xavier de Maistre. The historic Caffè Nazionale, right under the arcades of the Town Hall, is also here. Dating back to the mid-nineteenth century, this landmark was built on the remains of the convent of San Francesco and still preserves the circular hall in Gothic style.

First and foremost is the undisputed Aosta Cathedral. It is a treasure chest of art, such as frescoes and mosaics. Next to the church is the Museo del Tesoro of Aosta and the cloister.

Another beautiful monument in Aosta is undoubtedly the Collegiate Church of Sant’Orso. In medieval style, it is characterized by a historiated cloister with capitals on which are illustrations of the Gospel and the Old and New Testaments.

Another must-see is the Paleochristian Basilica of San Lorenzo, annexed to the church of the same name. It was built to house the bodies of the first bishops of the town. 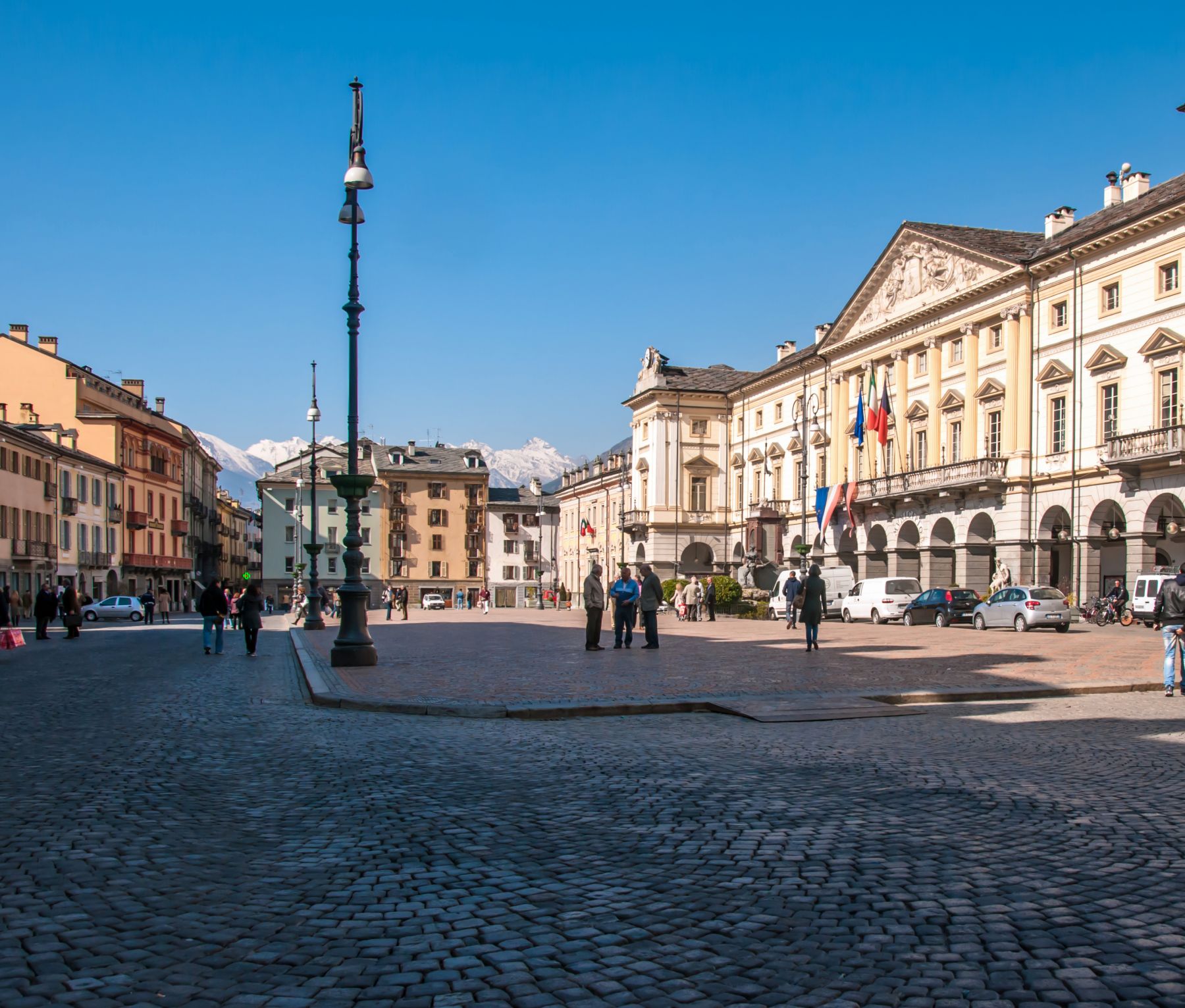 The Saint-Martin-de-Corléans Megalithic Area is one of the most interesting archaeological sites in Europe. It holds invaluable artifacts ranging from the Neolithic era to the present. The area and the museum are open to the public. You can visit the official website of the region for more information.

What to Eat in Aosta

The cuisine of Aosta is characterized by simple but decisive flavors. Among the typical dishes of the area are chnéfflene, which are similar to dumplings and served with fondue and cured ham. Other classics of this area are polenta and risotto with fontina cheese and chestnuts. Due to the cold climate, another typical dish is soup in lots of different varieties and flavors. 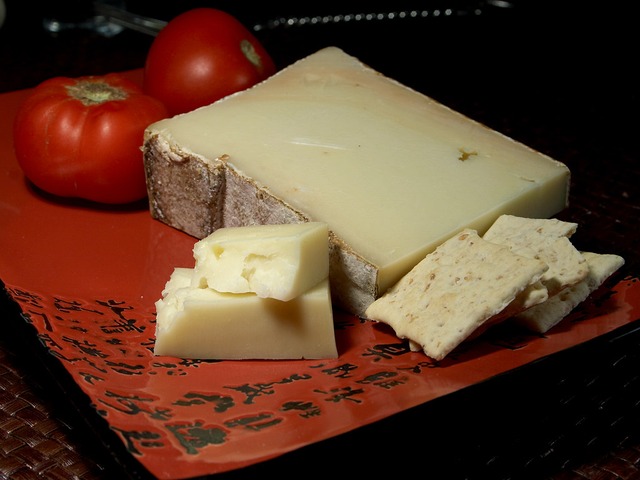 Now that you have an idea of what to see in Aosta, keep in mind that it is a magnificent town to visit any time of the year. In summer, it is perfect for those looking for fresh air and relaxation. In the colder months, it completely transforms into a winter wonderland. The Holidays are particularly magical here thanks to the snow and the charming Christmas Markets of Marché Vert Noël.