The Magical City of Bari and the Legend of St. Nicholas

With its almost infinite waterfront, its unmistakable smell of focaccia, and its vast artistic heritage, Bari is certainly one of the most important cities in Puglia.

Part coastal town, although it’s not renowned for its beaches, and part nightlife, Bari offers a wonderful mix to its visitors. From shopping to entertainment to culture and nature, this city has it all. 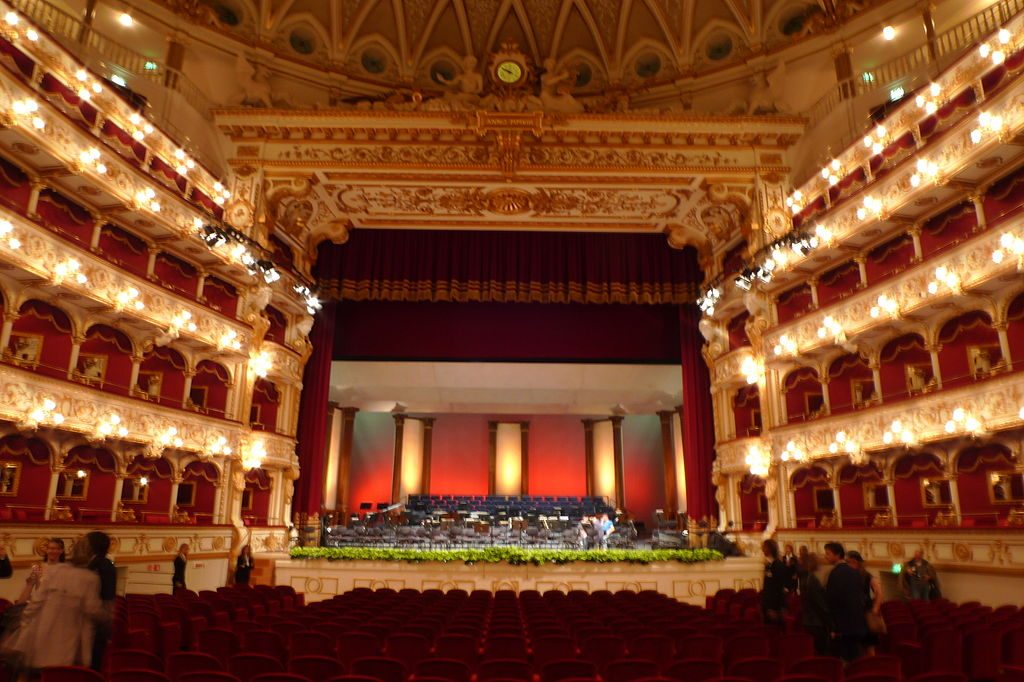 The starting point for a cultural visit to the city is undoubtedly the Petruzzelli Theater. This undisputed symbol of Bari’s culture stands in all its majesty along one of the most populated and busy streets: Corso Cavour.

From here, you can easily get to Piazza del Ferrarese with its view of the Imperatore Augusto seafront and nightlife. Go for a pleasant stroll between the elegant Murat district and the historic center.

Piazza del Ferrarese connects in a triangle shape to Piazza Mercantile, another hotspot, and to the Swabian Castle. This route also leads you to the sober but impressive Basilica of San Nicola. 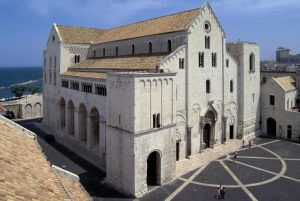 But the mere view from a distance will not be enough. Take one of the alleys through Bari Vecchia (Old Bari) that leads to Piazza San Nicola. Its Romanesque architecture enamors thousands of pilgrims every year.

Then cross the narrow alleys to reach the Cathedral of San Sabino, another extraordinary example of Romanesque typical of Puglia, with a majestic dome 35 meters high.

For years Bari debated the choice of its patron saint. Initially, it was Santo Sabino, but in the year 1087, Abbot Elia of Bari ordered 62 Baresi sailors to embark for the Turkish coasts between Rhodes and Cyprus because the Turks had recently conquered the small town of Myra, where the remains of St. Nicholas were kept.

The sailors’ mission consisted of taking possession of the Saint’s relics. When they arrived in Bari, the sailors were welcomed like heroes and Saint Nicholas was immediately loved and venerated. The abbot Elia let the citizens choose who their protector would be and they chose St. Nicholas. He is the patron saint of children, a figure of considerable importance, venerated by both the Catholic and Orthodox faiths. 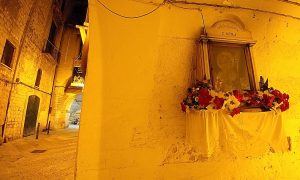 The people’s devotion to their patron saint is an integral part of the city’s folklore: in all the alleys of the ancient village, you will find corners dedicated to prayer in which St. Nicholas is depicted.

There are also many legends that have been built around his figure, such as that of making three laps around the “miraculous” column. According to legend, this column was placed by St. Nicholas in the Tiber and later transported to the church. The gesture supposedly guaranteed a marriage proposal to lonely girls and even today, the pillar is covered in notes posted by single ladies and gents.

Thanks to his generosity, St. Nick has also been identified as Babbo Natale, the Italian Santa Claus. It is easy to imagine that during Christmastime the atmosphere in Bari becomes magical. Usually, a large Christmas tree is set up in Piazza del Ferrarese and lit on 6 December, the day on which St. Nicholas is celebrated.

Read more about other places to visit in the Bari area: Alberobello, Locorotondo