What to See in Puglia: Lecce and Its Fascinating Baroque Style

A perfect combination of art, entertainment and excellent food

Also known as the “Florence of southern Italy”, Lecce enchants its visitors with its exuberant architecture and its old-world charm. In fact, the heart of Salento seems to be a place where time constraints do not exist, or rather, a city in which time seems to have stopped.

By walking or cycling through the narrow streets of the old town center, you can see just how full of art and history Lecce truly is. You’ll find numerous testimonies from Roman times, such as the Amphitheatre and the Roman theatre, but the most outstanding feature of Lecce is its Baroque style.

More specifically, it is called Barocco leccese because it is a style that developed on its own, in a very original way. Developed in the seventeenth century under the Spanish domination, this style is peculiar for the luxurious decorations made thanks to the use of the pietra leccese stone- a clayey limestone rock, which is very easy to mold and chisel. As a result, much of Lecce’s artistic heritage is embellished with these refined ornaments, which represent the meticulous work of skilled stonemasons. The particular softness and malleability of this rock have also given it the name pietra gentile (“gentle rock”). 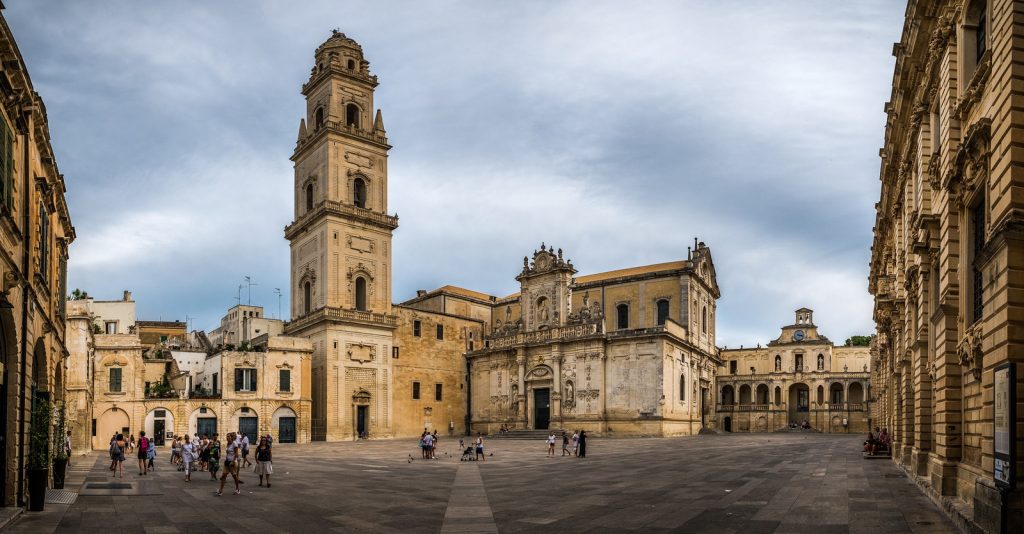 Significant examples of these sublime works can be found among the numerous palaces and religious buildings that appear in the old town center. One of these is the majestic Basilica of Santa Croce, built between the sixteenth century and the end of the seventeenth century, well-known for its unique rose window. The adjacent former convent of Celestini, dating back to approximately the same historical period and nowadays seat of the Government Palace and of the Provincial Administration, is also fabulous. Adorning the evocative Piazza Duomo is the Cathedral with its tall bell tower, together with the Seminary Palace and the Archbishop’s Palace.

We certainly cannot forget to mention the Roman Amphitheatre, built in the second century A.D. for entertainment purposes, then destroyed by earthquakes and later brought back to life thanks to numerous excavations. This imposing structure is located in the main square, Piazza Sant’Oronzo, which took its name from the patron saint of the city.

In fact, a 29 meter-high votive column built in his honor stands in the middle of the square and, above it, there is the statue of the saint in the act of blessing the city. On the ground, in the middle of the square, the town’s coat of arms can be seen: it is a she-wolf under a holm-oak tree (leccio in Italian) which gave the city its name. This tree, along with wolves, was very likely to be found in abundance between Brindisi and Otranto, and it was chosen as the symbol of Lecce, an emblem of artistic and architectural prosperity. 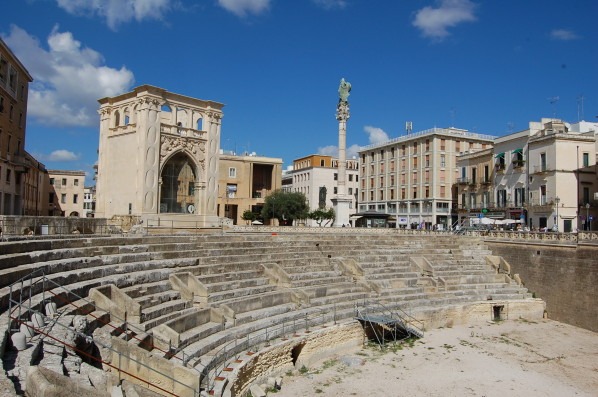 The Castle and Old City Walls

The “Seat” (Sedile) or Palace of the Seat, which was previously a town hall, also lies in the square and is currently being used for art exhibitions. Near Piazza Sant’Oronzo is the Castle of Charles V, built in 1539. At the very beginning, the Castle was a fortress used for defense, but later became a theater, then barracks and a military district. Today, it belongs to the municipality of Lecce and is the seat of the Department of Culture where it plays host to cultural, food and wine events and exhibitions, as well as the interesting Museum of paper mâché (Museo della Cartapesta). The museum displays more than 100 works by the most famous artists of Lecce, besides modern interpretations of works created by international artists. This museum is undoubtedly the most important example of local artisan work.

All of the above is enclosed within the three access gates to the city: Porta Rudiae, the oldest one, which took its name from the Western destroyed city of Rudiae; Porta Napoli, triumphal arch through which it was possible to go to Napoli. In front of it, the Obelisco dating back to 1822, can be found. Entirely made of pietra leccese, it is an obelisk situated on a pedestal that shows the coat of arms of the district of Terra d’Otranto. It’s decorated with a series of mythological representations and the coats of arms of the four districts of Brindisi, Gallipoli, Lecce, and Taranto. Finally, there is Porta San Biagio, dedicated to the Armenian bishop from whom it takes its name; the arch is the connection point between the old town and the modern part of the city. 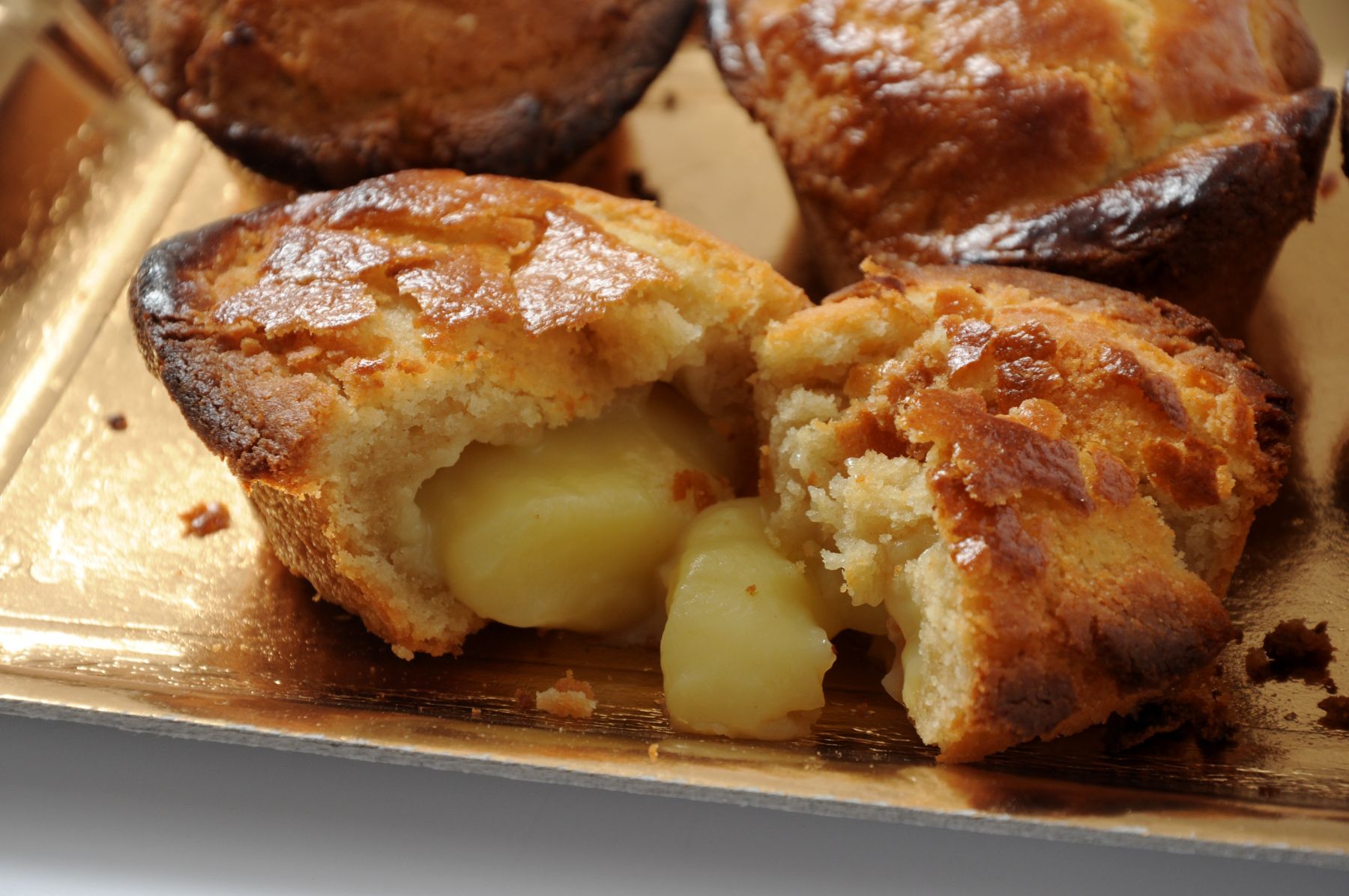 The opulence of Lecce is not only expressed through its art but also through the variety of its culinary tradition. Make sure to taste the local rustico (a piece of puff pastry stuffed with béchamel sauce, tomato, and mozzarella), or the pasticciotto leccese (pastry filled with vanilla or lemon cream), or some full-bodied wines. You can also try the typical coffee from Lecce: iced coffee mixed with almond milk. Lecce is a youthful city full of pubs and places where people gather and have fun, especially university and Erasmus students.

In short, the tourist experience in Lecce is well worth the visit. Also strategically located near the sea, it is an ideal destination for beachgoers. Summer temperatures can soar and for many tourists, the ideal time to visit may be the low season (autumn, spring, and even winter).

Lecce embodies the perfect combination of art, entertainment, and excellent food– three requirements that are fundamental for an unforgettable stay.