Today, I’ll be taking you just about as far south as you can go into a sub-region of Puglia known as Salento. This is a beach I have had the pleasure of visiting many times over the past twenty or so years. With the recent reopening of the so-called scalinetta, or staircase, it is high time that I write about Porto Miggiano in the beautiful seaside town of Santa Cesarea Terme. 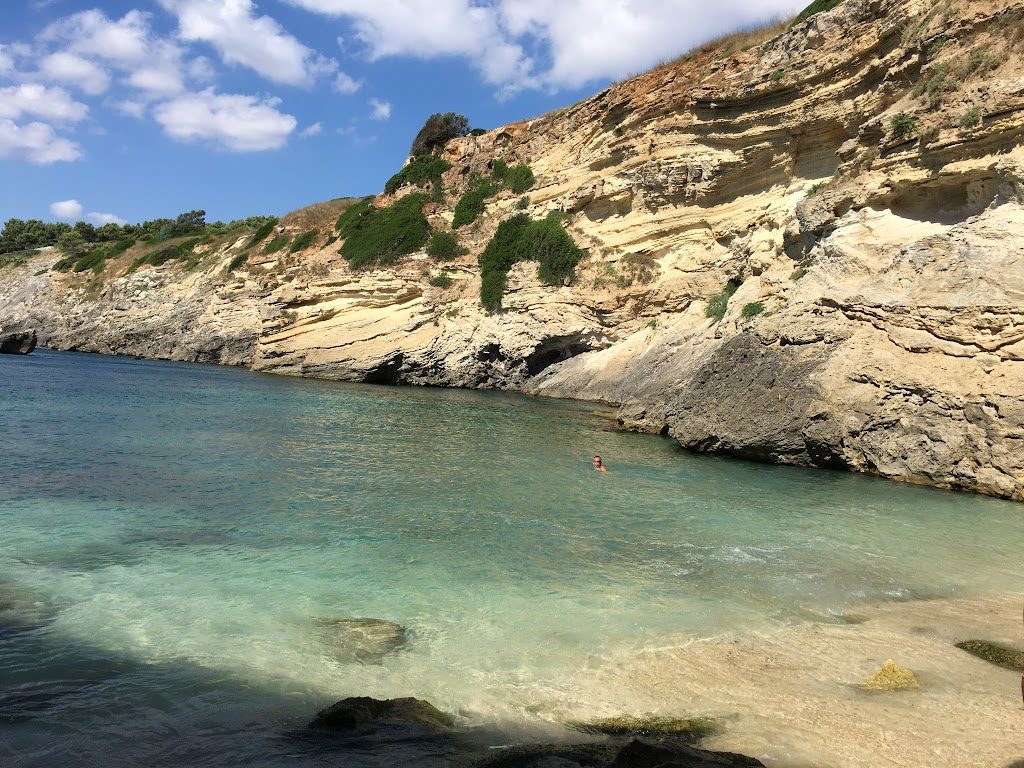 There really aren’t enough words in the English language to describe the sea’s various shades of blue and green. Aquamarine, emerald, turquoise, and lapis all come close but still don’t do it justice. Is it the stark contrast of the Adriatic Sea against the copper-tone cliffs or perhaps the contrast of the sun-kissed sky that create such a scene? Whatever it is, I think you will be hard-pressed to find a more breathtaking coastline anywhere in the world.

Porto Miggiano, like so many of Salento’s ports, boasts the remnants of a 16th-century tower built to defend the area from Saracen attacks. Today, it is just a mere reminder of Salento’s ancient past.

The “beach” area on Google Maps labeled “Porto Miggiano” is not really a beach but rather an area made of both manmade and natural rocks with access to the water. There is no sand here. Years ago, the only way to get into the water was by jumping in but now, there are two convenient staircases with handrails making for a very easy entrance into the water. Locals are experts at finding the flattest rock for laying out their beach towels and craftily wedging their umbrella pole securely between two jagged rocks. Pretty amazing.

Before you get to the swimming area, you will first pass by the boating dock where you can rent kayaks and pedal boats (although not always available). In the 2022 season, kayaks cost 15 euros per hour whether a single or double. We took out a kayak for an hour which was just enough time to explore the surrounding bay and even a small grotto. Life jackets are not required.

The crystal clear water at various depths is teeming with colorful fish and marine life. Even if you’ve never snorkeled before, you’ll want to try your hand at it here!

A second “beach” is labeled as “Spiaggia di Porto Miggiano” on Google Maps. This has been recently reopened as of July 2022. I had been to this little cove way back when the steps leading down to the exclusive beach were downright dangerous. They have since been rebuilt and improved making them very accessible for most beachgoers. Similar to the area described earlier, there are many manmade blocks and other rocks where you can set up your towel and possibly an umbrella. 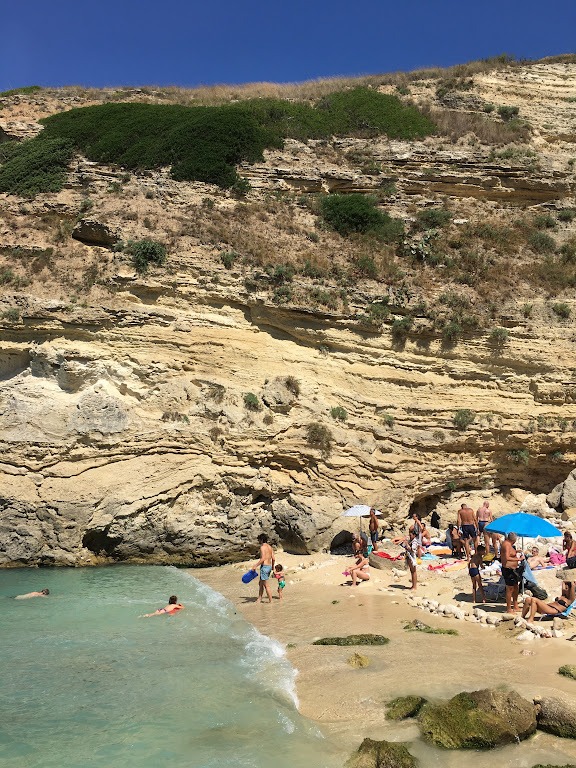 If you continue slightly further along, you will reach a very tiny stretch of sandy beach. This is the perfect spot for entering into the shallow water and is ideal for children too. From here, you’ll be right on top of the little grotto known as the Grotto delle Ancore. Swim inside and snap some amazing pictures that will probably be some of the best of your entire trip.

When to go: June or September or be there before 9 am if you must go in the peak season months of July and August.

What to bring: Good quality water shoes suitable for climbing on slippery rocks and a waterproof camera. Also, a snorkel mask!

Where to park: Parking is available in the Augustus Resort parking lot for free.

Article and photos by: Marie Contino