Matera: What to See in Sasso Caveoso and Sasso Barisano

One of the most striking and now recognizable cities in the entire world, Matera is the mysterious “Città dei sassi” or “the City of Stone”. Virtually unknown to tourists until the late ’90s and early 2000s, Matera has gone from one of the most impoverished cities in Italy to a booming cultural destination. 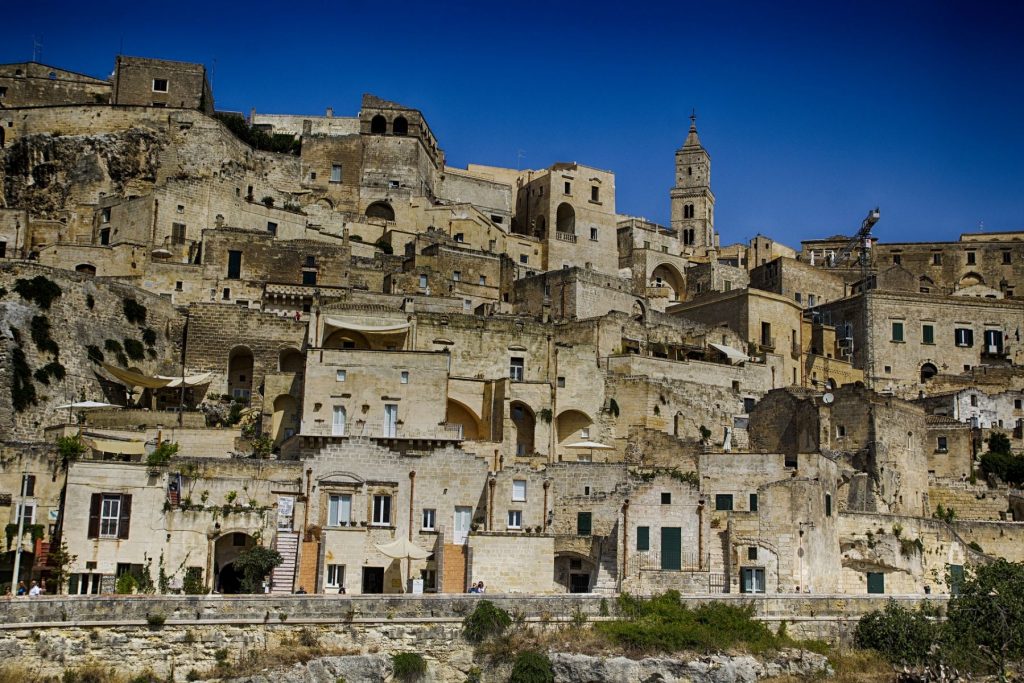 Located in the region of Basilicata, the city of Matera borders the also newly-famous region of Puglia in the heel of Italy’s boot. It has been called nothing short of a miracle that it could make such a transformation in a relatively short amount of time. In 1993, it was recognized as a UNESCO World Heritage Site and in 2006, Mel Gibson chose it for his film The Passion of the Christ. Many say that this kick-started its renaissance.

Thousands of Matera’s residents were living in cave dwellings as recent as 70 years ago. Today, we see them as characteristic and fascinating, but at the time, they were overcrowded, rampant with disease, and unfit for humans.

But, the caves go back much, much further. Most scholars believe that Matera’s caves were the first human settlement in Italy and one of the most continuously occupied human settlements on earth- at least 12,000 years.

In the early 1950s, the government funded a program to relocate the “cave dwellers” and move them into housing developments in the city. This led to the eventual abandonment of the ancient caves until the late 1980s when the government did a complete 180 and began funding a revival project to encourage people to move back in and open businesses. It worked and the rest is history.

Luckily for anyone visiting after 2019, Matera has come into the modern world while still maintaining its extreme unicity since it was named the European Capital of Culture. So, let’s find out what to see and do in part I of our tour. 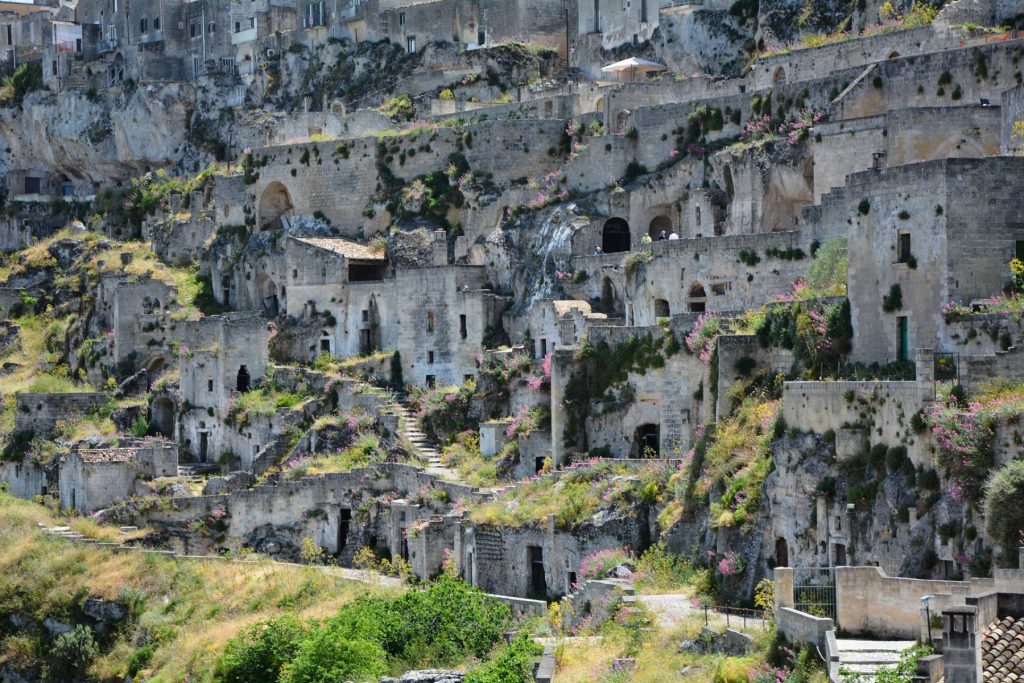 The cave dwellings are really divided into two neighborhoods or districts: Sasso Barisano and Sasso Caveoso.

Just a few steps away from the Cathedral in the upper part of Sasso Caveoso, visitors will find Casa Noha. This is a perfect starting point for your tour (whether self-guided or hired). Tickets are required for this introductory and informative multimedia presentation of Matera’s sassi.

From here, you can move toward Piazza di San Pietro Caveoso where you can visit the rupestrian church and enjoy a spectacular panoramic view!

Next, you can visit the two important churches of Madonna dell’Idris and San Giovanni in Monterrone both carved into a mass of calcareous rock (tufo). Near here, you should also visit the Casa-grotta (cave house) which was inhabited until 1957 and has now been turned into a museum giving visitors a true picture of what it would have been like to live here.

The Cathedral, Santa Maria della Bruna, dates to the year 1268. Considered to be Apulian-Romanesque, it is positioned in the highest point of the city and allows for a spectacular view of the Sasso Barisano.

Barisano (from the city of Bari) is the oldest part of Matera and where most of the hotels, bars, restaurants, and shops are located.

There are also numerous churches and crypts dating back over a thousand years as well. For example, the Church of San Pietro Barisano is the largest rock church in Matera. Its Romanesque-Baroque facade and beautiful frescoes inside make it a must-see on your itinerary.

Another highlight is the Church of San Agostino and the Crypt of San Giuliano located at the highest point of Via d’Addozio. This is one of the best spots to get amazing shots of the sassi.

If time allows, you should also visit the Sassi in Miniatura, an amazingly well-constructed model of the sassi on via Fiorentini as well as the Museo-Laboratorio della Civiltà Contadina (Museum-workshop of Peasant Culture).

Stay tuned for part II of our guide to visiting Matera! 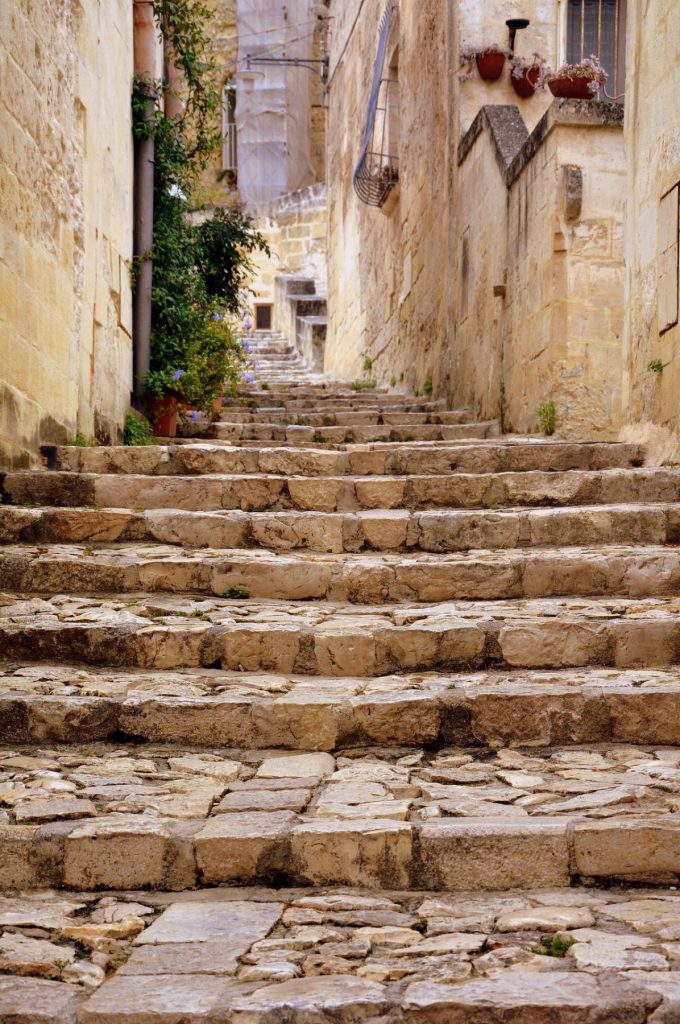 Post Views: 1,230
Redattore
Islands of the Ponza Archipelago off the Coast of Rome
In Search of the Hidden Treasure: la Badiazza