The City of Catanzaro in Italy and its Isthmus

The Italian peninsula stretches from the Alps to the Strait of Messina with its characteristic boot shape. The Isthmus of Catanzaro in Calabria is the narrowest part of Italy. 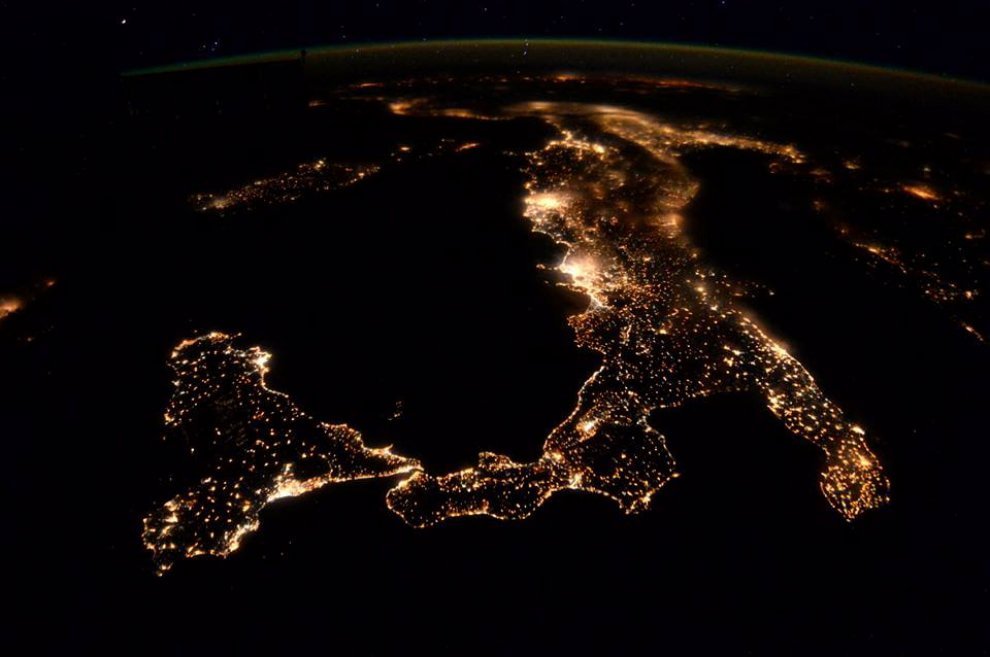 It is in fact a thin strip of land, just thirty kilometers long, that divides the Ionian Sea from the Tyrrhenian Sea and an ancient and fascinating meeting place between East and West. It is not only a geological and geographical peculiarity but a territory that preserves traces of history, art, traditions, legends, and myths.

Not everyone knows that Italy got its name precisely from this area derived from the word Italòi. The term was used by the Greeks to designate the Vituli, i.e. the Itali, a population that inhabited these lands and worshipped the image of a calf. The name, therefore, means “the inhabitants of the land of calves” and, until the beginning of the 5th century B.C., indicated only the current Calabria, then gradually started to identify the whole southern part of the country.

From 49 B.C., the term “Italy” began to indicate the entire peninsula, since the emperor Augustus expanded the borders to the east including Istria and west up to the Var river (in the current area of Nice).

As far as we know, it is the historian Antiochus who tells us about these events:

“The entire land between the two gulfs of seas, the Nepetinico [St. Eufemia] and the Scilletinico [Squillace], was reduced under the power of a good and wise man, who convinced his neighbours, some with words, others with force. This man was called Italo and he was the first one who called this land Italy. And when Italo took possession of this land of the isthmus [of Catanzaro], and had many people who were submitted to it. He immediately claimed the neighbouring territories and placed many cities under his domination.”

The story of King Italo, dating back to the late Iron Age, is presented with such peremptoriness that can be freed from the dimension of myth and legend, to be handed over to history. In his book “History of the Peloponnesian War“, Thucydides writes in fact that:

“Then there are still some Siculi in Italy, [a country] which drew this name from someone called Italo, king of the Arcadians.” 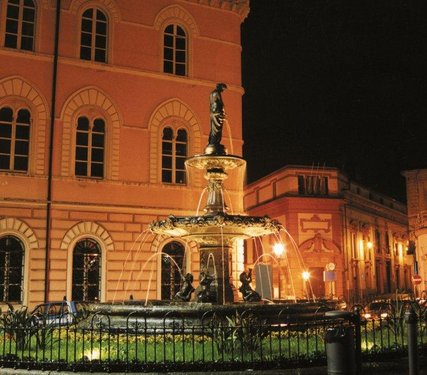 In short, there is enough to make this southern part of Europe, which is kissed by the sun, the two seas and the wind, very suggestive and worth visiting. A wind that in Catanzaro, capital of Calabria, is never lacking, to the point that the city that gives its name to the isthmus is also known as the city of the three “V”s: wind (vento in Italian), velvet, Vitaliano. The latter is the Patron Saint, while velvet refers to the ancient art of silk, of which Catanzaro was – throughout the Middle Ages and until the end of the 18th century – a very rich and crucial center, one of the most active in Europe.

Still today, in fact, many place names in its old town center evoke those splendors: the Filanda district, Via Gelso Bianco, Vico dell’ Onda. There is also a suggestive hypothesis that the current name of the city derives from the Greek word Katartarioi, which means silk spinners.

Strolling through the alleys of the old town center of Catanzaro, placed on an impregnable monolith at 330 meters above sea level (the siege of the French in 1528 was vain: it lasted three months and they could not take the city!), is an experience which reminds you of the past, although the urban wounds inflicted in the second half of the last century to its medieval fabric have undermined the full visibility and enjoyment.

But the city is not only its ancient core. In fact, it extends along a fairly wide territory. From the green, lush slopes of the pre-Sila it reaches the blue of the wonderful Ionian coast. Here, there is a lively marine district, from which – according to another legend strongly believed by the German historian Armin Wolf – Ulysses left for Ithaca.

In Catanzaro, it is also possible to visit the Archaeological Park of Scolacium, the Roman city built on the ruins of the former and strategic Greek settlement of Skylletion. You can visit the remains of the Roman colony with its most important monuments, ruins of paved roads, aqueducts, mausoleums, sepulchral plants, watering places, and various architectural materials, as well as ceramics and sculptures.

But it is certainly the theatre, placed on a natural hillside slope and designed to accommodate five thousand spectators, that is the highlight. The amphitheater is located a few meters from this area. Inside the archaeological park, immersed in an olive grove, you absolutely must visit the museum as well as the imposing Basilica built by the Normans. 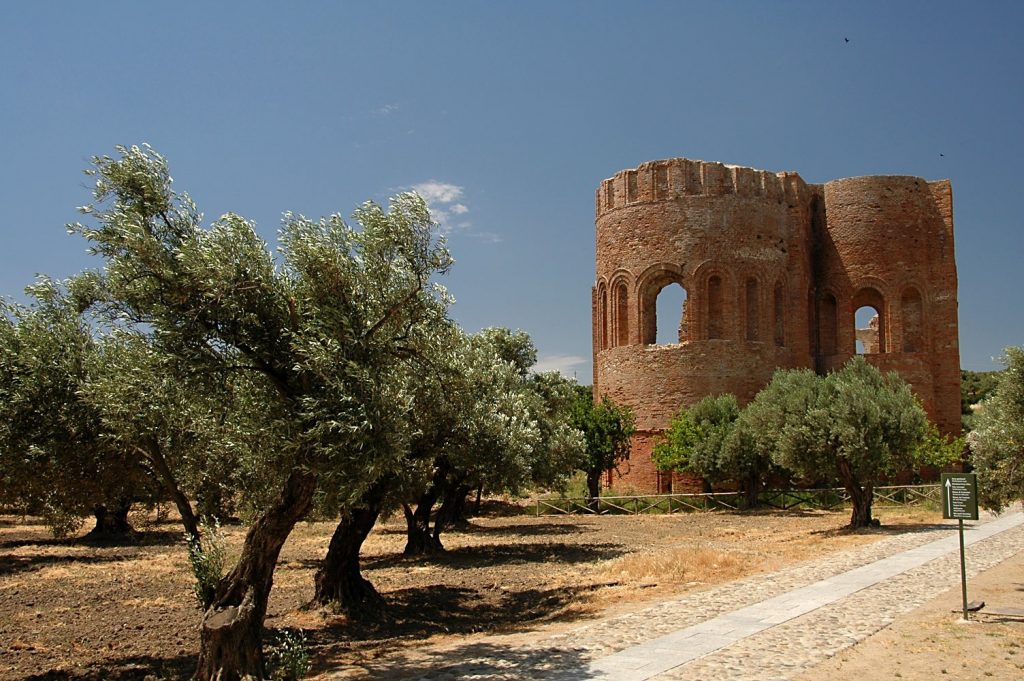 The entire area hosts outdoor events, such as the sculpture exhibition organized by the MARCA museum of Catanzaro, which has so far presented works by international artists such as Stephan Balkenhol, Tony Cragg, Wimm Delvoye, Jan Fabre, Antony Gormley, Dennis Oppenheim, Mimmo Paladino, Michelangelo Pistoletto, and Marc Quinn. It also hosts summer events such as “Harmony of Art Festival” which, since 2000, in the enchanting setting of the park, offers music, theatrical and dance performances, with the presence of international artists.

This is also the land of Cassiodorus, a politician, man of letters and counselor of Theodoric the Great, who was Emperor from 493 to 526. In Squillace, Cassiodorus founded the Vivarium, which is considered the first Christian University.

After having smelled the scent of such an ancient Gulf, which used to be the scene of commercial and cultural tradings with nearby Greece, you can return to Catanzaro to taste its typical dish, the “morzeddhu”,  a rich tripe dish.

And after having something to eat and drink, you can continue your journey by visiting the museums of Catanzaro: the MARCA (permanent collections including the Gipsoteca Jerace, as well as temporary exhibitions of contemporary art); the March (archaeological and numismatic); the Musmi (military); the original Museo delle Carrozze (Musem of Carriages); the birthplace of Mimmo Rotella (among the first investigators in the world of the décollage art technique); the charming Rock Museum; the Diocesan Museum; the monumental complex of San Giovanni, built on the ruins of the Norman castle, which hosts exhibition halls, underground galleries and a panoramic square. From here you can enjoy a breathtaking view of the Gulf of Squillace and the Morandi Viaduct an imposing and surprising bridge with a single arch- a real monument and the modern symbol of the city.

Take a stroll through the Mediterranean Biodiversity Park: seventy hectares of a unique ecosystem where large varieties of flora and fauna coexist; the charming Villa Margherita; and the wild forest Li Comuni.

Finally, you cannot completely understand what the Isthmus of Catanzaro is geographically if you don’t observe it from above. You don’t have to fly, you just need to go to Tiriolo, a town situated 800 meters above sea level and ten kilometers from the capital of Calabria. It is not by chance that Tiriolo is defined as the “country between the two seas”. From the old village, you can see the Ionian Sea to the east and the Tyrrhenian Sea and the Stromboli volcano to the west. 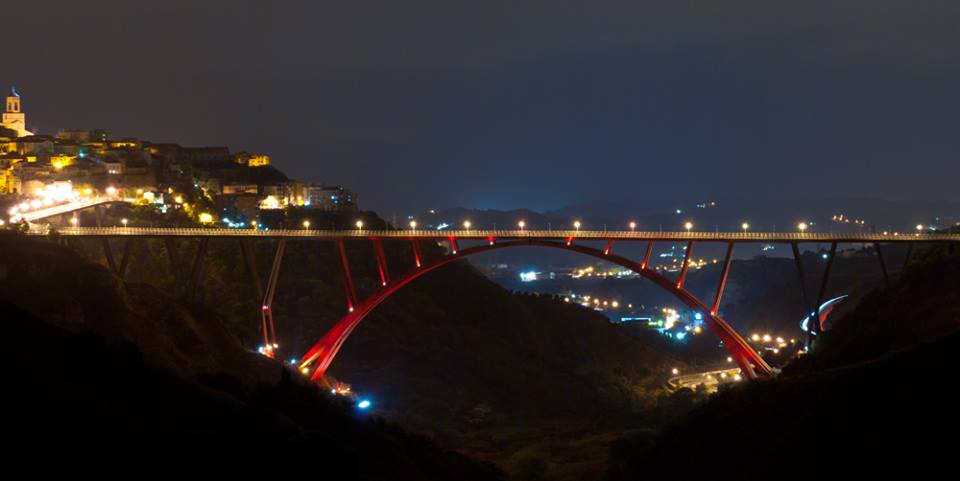 And if you really are in the mood for romance and beauty, at the first light of morning, you can enjoy the sun rising on the Ionian Sea, while in the evening you can see the sun sinking below the horizon of Tyrrhenian. In the meantime, I recommend a visit to the artisan workshops of the village and to the remains of the magnificent Palazzo dei Delfini, dating back to the Bruttians in the 3rd century B.C.

Post Views: 1,469
Redattore
Anzio: from the Villa of Emperor Nero to Porto Innocenziano
International Nurses Day: Tracing the Roots of Medicine in Italy