Calcata: the Coolest Village in Italy

If you love visiting unique places that seem to be both suspended in time and in air, then the hilltop village of Calcata is for you! Perched atop a tuff mountain in Lazio’s Viterbo province, Calcata is truly a one-of-a-kind experience. Known as the “artists’ village” for the talented painters, sculptors, musicians, and even actors that live here, the little alleys are filled with studios and shops. 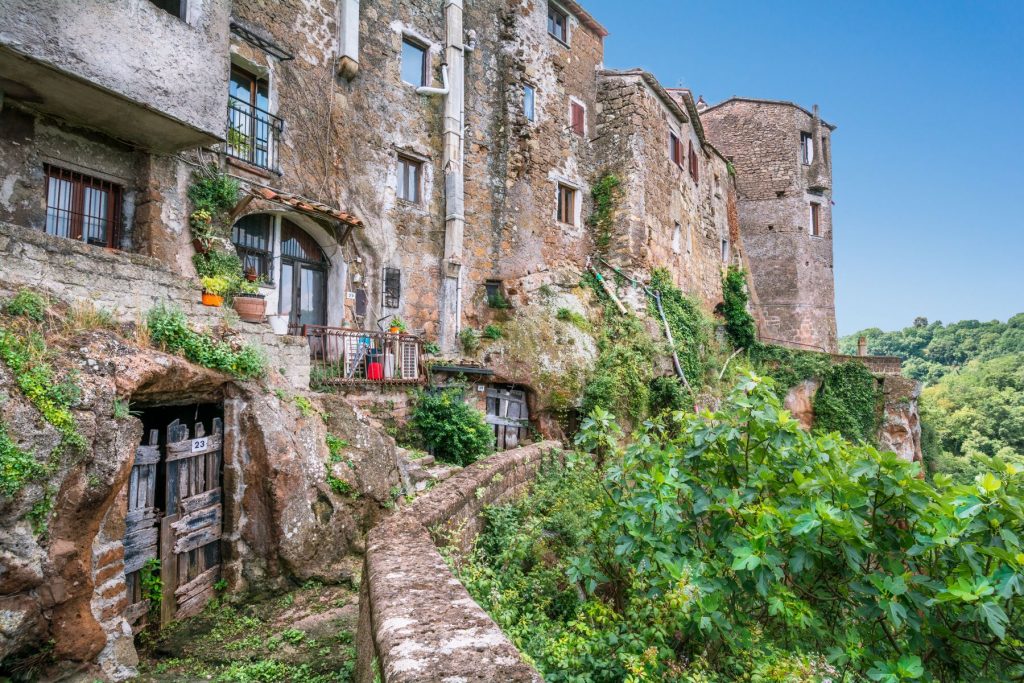 Not Your Typical Village

In the beautiful Treja Valley just 45 km from Rome and about 30 minutes away from Lake Bracciano, Calcata makes a perfect day trip and will be unlike anything else you see in Italy! It has been called the “hippest” village in Italy. So how did a typical medieval village become such a haven for an international artistic community?

It all started in the 1930s when the village was actually evacuated due to government concerns that it would literally collapse and slide off the tuff stone hill. Most of the residents moved to nearby Calcata Nuova, or “New Calcata” just a couple of kilometers away. With the rise of the hippie culture in the US in the 1960s, squatters began to occupy the abandoned buildings in old Calcata soon giving rise to an actual community. Eventually, the government allowed the new residents to purchase the homes, and new businesses and art studios sprang up all over the historic center. Today, it has even been described by the New York Times as one of “the grooviest villages in Italy”. 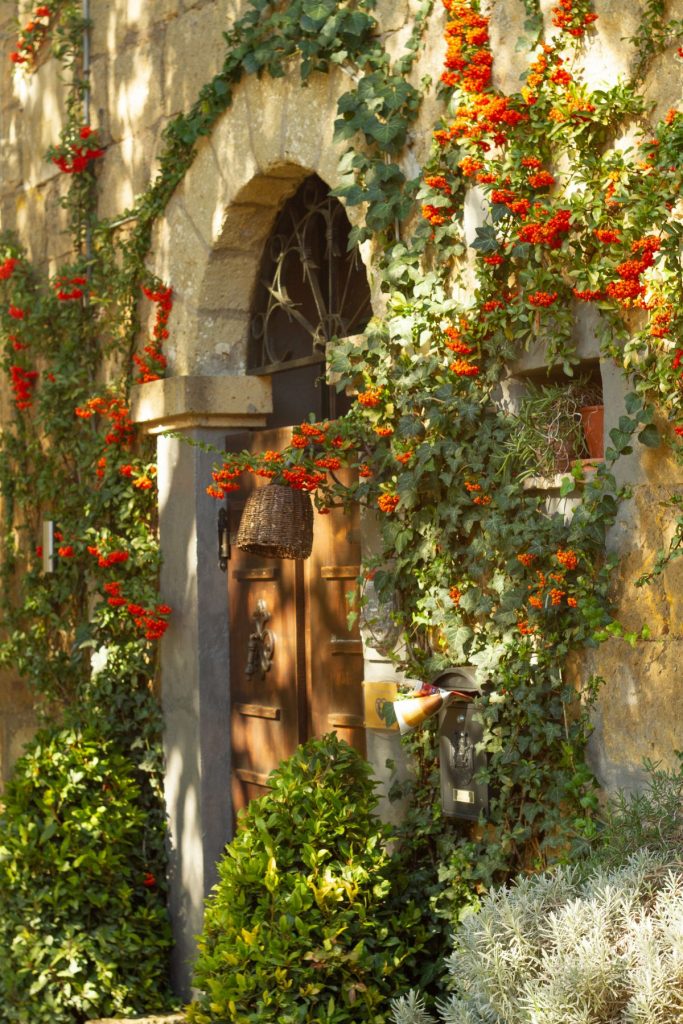 Besides picking up a cool souvenir and wandering around the tiny streets with colorful shops and studios, unusual restaurants, and cafes, you might be wondering what else there is to do in Calcata. First of all, there are actually more cats than people who live here on a permanent basis. You’ll see them everywhere! But let’s not forget that this tiny village was here long before the hipsters.

The only entrance into the village leads to the castle also known as the Palazzo Baronale. Its crenelated tower is part of the famous skyline and the palace itself has witnessed thousands of civil marriages over the centuries. It also hosts numerous art exhibits throughout the year. 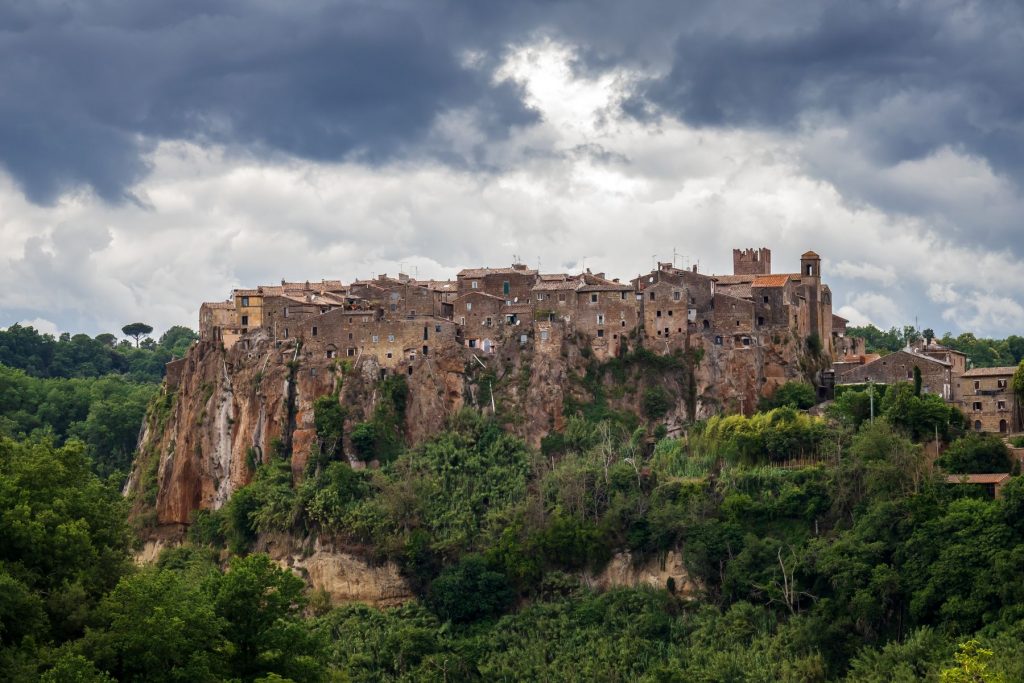 The Church of the Santissimo Nome di Gesù has quite a history and is tied to a famous legend. Built in the 1300s and later restored in the late 1700s, the real importance of this church dates to the year 1527. It is believed that a German mercenary was arrested and held here after the sacking of Rome where he stole the Holy Prepuce (or Jesus’ foreskin). The relic was held in this church drawing thousands of pilgrims over the years until 1983 when it was stolen, jeweled case and all. Traditionally, January 1st was the Feast of the Circumcision of Christ and the relic was part of a celebration in Calcata for centuries on New Year’s Day.

Of course, Calcata is not the only church to have claimed ownership of the Holy Prepuce, and the matter has been studied by historians for years without really drawing any definitive conclusions.

Between Calcata and Lake Bracciano, make sure to explore the Treja Valley Park. There is a 7km trail between Calcata and the Monte Gelato waterfalls which is highly recommended during the late spring and summer months. Of course, you can also drive and enjoy the falls just the same. There is also an outdoor museum within the woods that includes 40 different pieces all made from natural materials and camouflaged into the landscape- the Opera Bosco Museum. 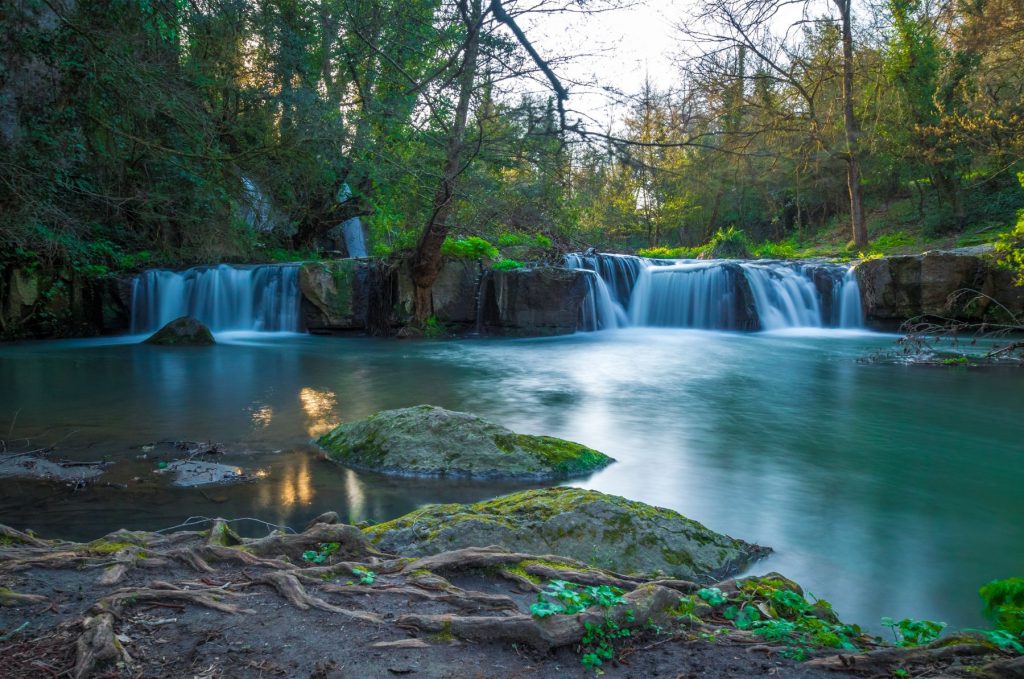