The Island of Capri from a Local’s Perspective

The best way to learn about a new place is to experience it first hand. Who better than someone who has lived there to convey those powerful emotions that only traveling can provide. When the place in question is Capri, well, there is a lot to say. 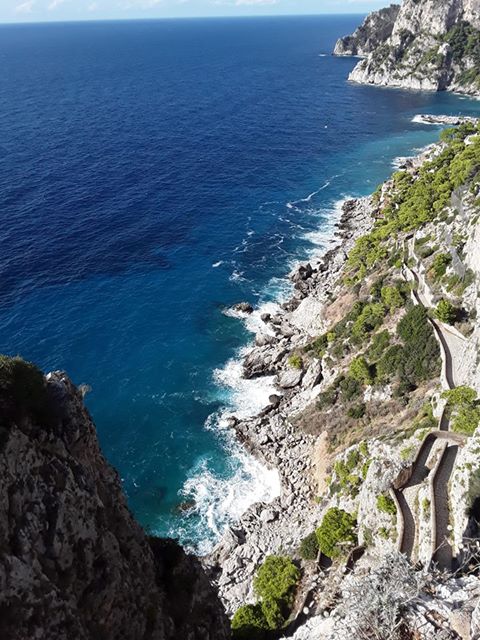 Six Months of Summer in Capri: a Pearl in the Gulf of Naples

It’s 6:55 a.m.; I open the door of my room and walk out onto the terrace with a view of the sea and Capri’s iconic Faraglioni rocks. A new workday is about to begin. I used to believe that there were only 2 Faraglioni, but actually, there are 4. 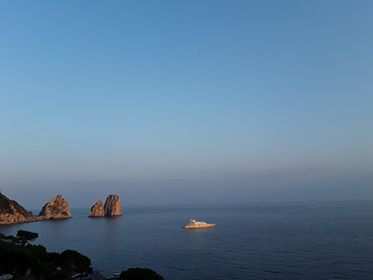 Another popular animal is the seagull. Sociable and curious, they fly close to tourists searching for food. I used to read articles about aggressive Venetian seagulls stealing tourists’ sandwiches, but I was pleasantly surprised by the way Caprese seagulls interact with human visitors. I often meet two of them on my hotel room terrace. I think they are a couple; I recognize them from some red spots they have on their beaks. They proudly let me take pictures of them.

But my job is not taking pictures of seagulls! I am a receptionist and every morning I meet tourists from all over the world: Canada, Brasil, Russia, Japan, Germany . . .

Our guests often ask for suggestions about what to visit. I reserve boat trips to the Blue Grotto for them. I had the opportunity to visit it many years ago and to admire the effect of light refracting on the water. The Grotto was even used as a nymphaeum- a natural grotto consecrated to the nymphs- in ancient Roman times.

It was rediscovered in 1826, by Fries and Kopish, two Germans that followed the directions of Angelo Ferraro, a fisherman from Capri who was also called O Riccio. The island is full of inlets and caves that are less famous than the Blue Grotto, but no less beautiful like the Green Grotto and the White Grotto.

In addition to boat trips, our hotel offers a free shuttle service to Capri’s city center and back. When guests arrive in the center, I suggest walking through the shop-filled streets and trying the coffee ice cream at Alberto’s or fresh fish dishes at Longano’s.

Walking through the alleys around the piazzetta, you can find every kind of souvenir: from fashionable accessories to coral, from limoncello to hand made sandals. Shopping is always fun, but in Capri, it becomes glamorous! I spent hours and hours admiring a pair of gold sequin pumps.

Anyone wanting to impress friends and relatives must stop at the perfume shop. Legend has it that the famous scents from Capri were created for an unexpected visit by Queen Giovanna d’Angiò. The Father of St. James’ Carthusian Monastery, surprised by the news, ordered flowers to be picked and placed in water. Three days later, when the flowers were thrown away, the Father realized that the water had acquired the flowers’ scent. Capri’s first parfum had just been created.

The monastery’s original formulas of the ancient parfums were only rediscovered in 1948, when the Father was authorized by the Pope to give the formulas to a chemist, who created a laboratory and called it Carthusia.

Nowadays, there are many Carthusia shops, not just on the island, but also in Naples, Sorrento, Positano and Rome. In addition to perfume, you can buy candles, body creams and air fresheners. The names of scents are evocative: Corallium, Mediterraneo, Terra Mia, Fiori di Capri.

I personally tried the Fiori di Capri scent and found that it lingered delicately. The perfume shop is surrounded by palms and banana trees, that lead to the Gardens of Augustus. 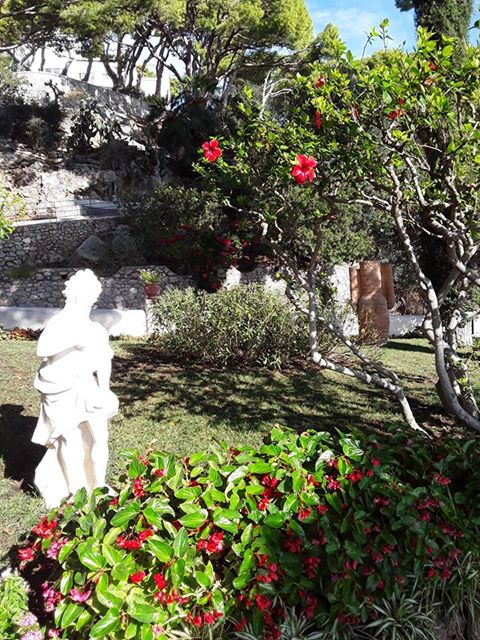 The Gardens of Augustus belonged to the German industrialist Krupp and still contain some of the most common plants on the island such as lemon, hibiscus and purple heart. Time seems to have stopped in this small city park, where peace and light reign. Sculptures and fountains adorn the space and it’s a lovely spot to admire the Faraglioni rocks and Mermaids’ Rock. You can also see the famous Via Krupp that goes from the city center to Marina Piccola. Nowadays the road is closed due to a risk of falling rock.

Visitors can purchase a single ticket valid for both the Augustus Gardens and the Charterhouse of St. James. The monastery hosts a permanent exhibition of paintings by Diefenbach, who spent the last 13 years of his life on the island. His works depict landscapes of Capri: the Faraglioni, the Mermaids’ Rock, the Natural Arch and the White Grotto. The setting of his subjects is almost always nocturnal, sometimes twilight. The colors are always dark. Diefenbach alternates mythological characters – like nymphs and mermaids – and Christian images. There are many crosses in his paintings.

In his works, he expresses a characteristic of Capri that many people ignore; the Blue Island”, indeed,  is also known as the “Mysterious Island”. In the past, it was believed to be inhabited by ghosts, and the image that appears in Premonition of Death looks just like a ghost. Another painting that impressed me very much was Thou Shalt Not Kill which depicts God’s face, a manhandling a bloody knife, and a dying deer. I was astonished to learn that for Diefenbach killing an animal was like disobeying the Ten Commandments. Reading Diefenbach’s biography, I realized that he was influenced by Lorenz, a relative of his, who introduced a young Diefenbach to mysticism. The painter later became a vegetarian.

More than a century ago, Diefenbach had noticed the presence of seagulls on the island; he used to dampen the dark colors of his works with white brushstrokes in order to imitate the effect of the seabirds’ wings.

My favorite painting is Capri, a physical map of the island. In this work, there are neither religious messages to interpret nor dark colors. The artist paints the contours of the island in the simplest way as if it were seen from above. Visitors of the Monastery will transition from the dark shadows of Diefenbach’s works into the light entering the trifora windows of the church decorated with lively, colorful frescoes. Finally, you’ll move into the sun-kissed Small Cloister and the Big Cloister with a central lawn divided into a geometrical pattern of triangles.

The last step of this tour of the Monastery is the park, with its secular trees. Like the Augustus Gardens, the park allows tourists to enjoy a breathtaking view of the Faraglioni rocks and the Mermaids’ Rock.

The beauty of Capri is often trivialized and reduced to seaside tourism. Actually, the island is rich in history, archaeology, concerts and cultural events. Piazzale Diaz is famous for offering a breathtaking view of the Gulf of Naples and Mount Vesuvius. But in this square, there is also an original sculpture by Stefano Bombardieri. Other works of this artist are on display at Liquid Art System Gallery, a few meters before Quisisana Hotel.

There are other Liquid Art System Galleries in Anacapri, Positano, London and Istanbul that display the works of 59 artists from all over the world. I appreciated the originality of Stefano Bombardieri and Seo Young-Deo’s sculptures.

Villa Lysis was another pleasant surprise for me. In the past, it was the house of the writer Fersen. Nowadays, it’s a concert and event venue.

I dwell on an invitation that has been emailed to our hotel: “Atmospheres from the world and from time. Flute and guitar duo in concert in Villa Lysis”. I print some copies of it for our guests. 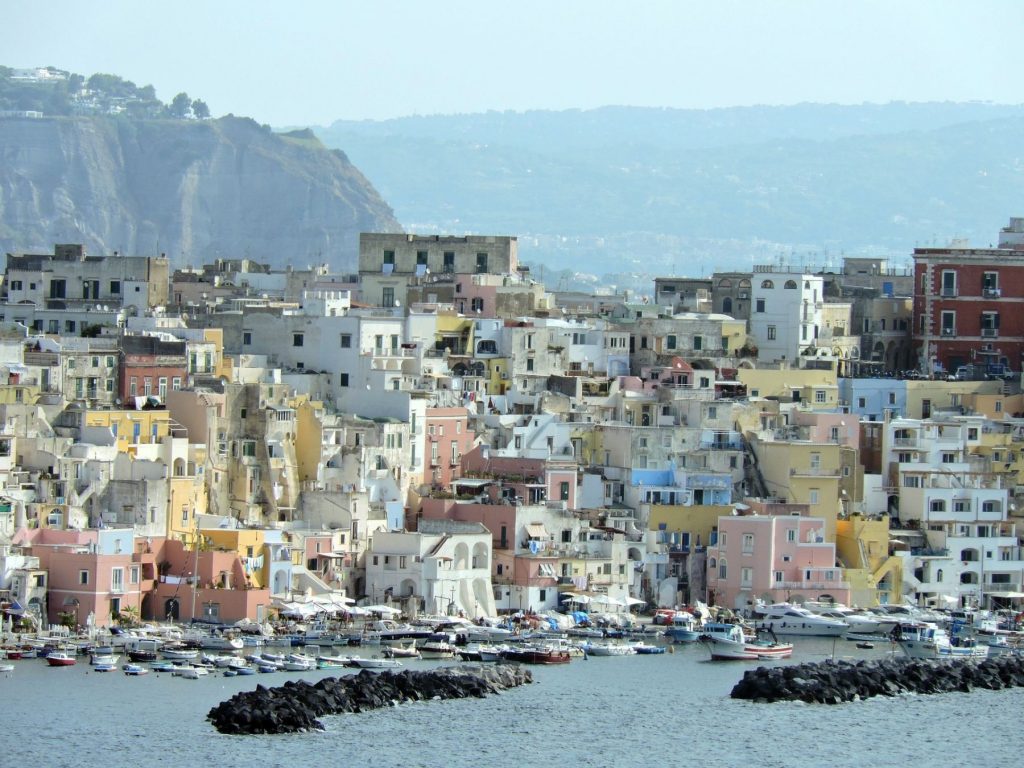 It is dinner time, and summer just doesn’t seem to want to end on this magical island, where the weather is still warm at the end of October. Music plays in the restaurant.

And if you want to know what they’re singing about, you’ll just have to come to Capri to find out.

Read Amalfi Coast and more about the Campania region!

Article and photos by: Anna Visconti