The Angevin Castle of Civitacampomarano – Campobasso

The Castle of Civitacampomarano which overlooks the village was erected under the rule of the Balzos, or Carafas, between the Mordal and the Vallone Grande streams. Vallone Grande is also one of the tributaries of the Biferno River. The castle replaced an older watchtower dating back to the second half of the 12th century, and whose perimeter can still be seen. The building we see today, on the other hand, probably dates back to the 13th century and has the typical architectural elements of the Angevin era. 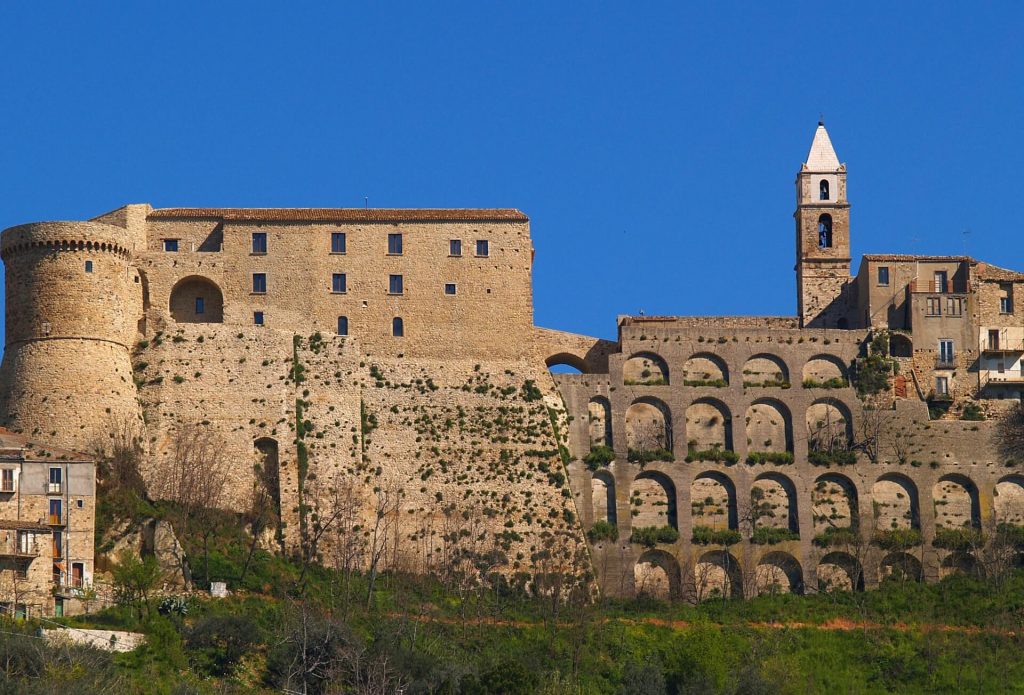 The plan of the Castle of Civitacampomarano is quadrangular and the three cylindrical towers that can be admired (two perfectly preserved and one partially destroyed) are merged in the master walls and, together with the battlements, highlight the medieval origin of the building. A Renaissance loggia introduces particular light and shade effects. Around the entire structure, there is a moat that overlooks the current Town Hall Square, which, since the end of the 20th century, separated the castle from the western wall. 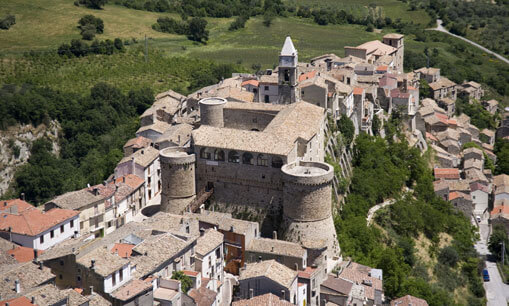 The castle with the still visible three towers

A fourth smaller tower, which today is one of the private houses built close to the walls, is still visible on the extreme south-west of the castle. The 14th-century portal is interesting because, in the past, it connected the castle to the village by a drawbridge over a large moat.

On the eastern facade there is Paolo di Sangro’s coat of arms and you can admire a gryphon which is depicted with two inverted lilies. It is the symbol of the definitive defeat of the Angevins (represented by the lilies) by the Aragonese (represented by the griffin) for the conquest of the Kingdom of Naples. Paolo Di Sangro, one of the famous lords of Civita, betrayed the Angevins in the Battle of Sessano on June 28, 1442. In exchange for the help offered, Alfonso I of Aragon gave him the castle.

In the inner courtyard, you can admire the Fountain of the Fauni, which has four zoomorphic figures, symmetrically arranged around a central column, at the top of which there is a base. The Carafa della Spinas were feudal lords of Civitacampomarano for a short period of time and their domination was imprinted in the stone above the coat of arms of Sangro. The Carafa’s blazon is represented by three horizontal bands crossed diagonally by a thorn.

Around the perimeter of the courtyard, under the roof, you can see a system of terracotta gutters that collect rainwater and convey it through two wells into a large cistern located below the surface area with a capacity of 120,000 liters.

In ancient times, it provided the entire town with water. From the courtyard, you can access the service rooms, the stables and the stately rooms located on the main floor, which can be reached by a covered stone staircase. On the first floor, there are rooms and the reception hall. Originally, the coffered ceiling of the stately rooms was decorated. 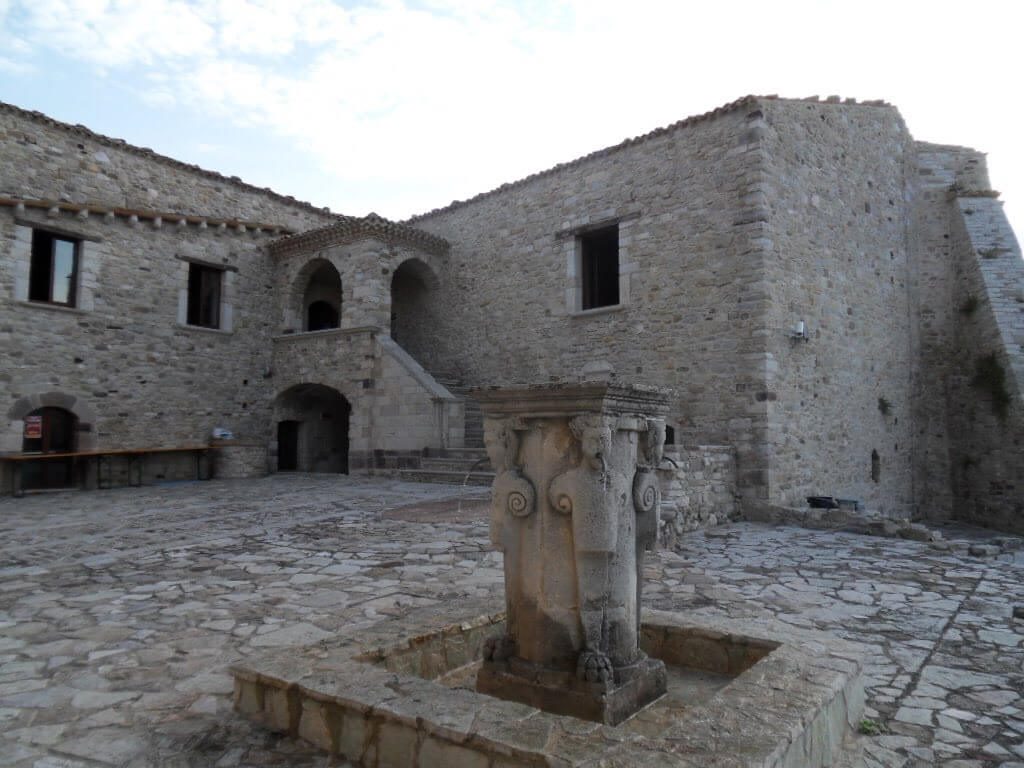 Declared a National Monument on May 2, 1979, with a Decree of the of Cultural Heritage and Activities, it was purchased by the State in March 1988. After extensive restoration work, it was reopened in the early 2000s. In 2007, the Castle of Civitacampomarano was the seat of the didactic activity of a project curated and directed by DIRES (Department of Restoration and Conservation of Architectural Heritage of the University of Florence – today DIDA). The important project aimed to train, specialize and update the operators, in order to qualify existing personnel and businesses working in the restoration sectors.

The distance from Campobasso to Civitacampomarano is 36 km, just over half an hour by car, and there are private buses that can be booked to take tourists to the castle.