A Visit to Modena: the City of Luciano Pavarotti

The places that most characterized the Pavarotti's life

This article will take you on a discovery of the life of Luciano Pavarotti and his city of Modena in Emilia-Romagna.

Luciano Pavarotti is considered one of the ten greatest tenors of all time. Born on October 12, 1935, in the city of Modena, he inherited his beautiful voice and his passion for singing from his father Fernando who was an amateur tenor in the Corale Gioachino Rossini. He did not immediately follow his musical studies, but dedicated himself to the teaching of P.E. in primary schools, after enrolling at the Magistral Institute of Modena. In the meantime, he improved his singing talent with the tenor Arrigo Pola and three years later, departed for Japan with maestro Ettore Campogalliani. For Luciano, these two great men would forever remain his only true maestri.

In 1961, he had his first personal recognition thanks to the victory in the Achille Peri International Competition, which allowed the young Pavarotti to perform in front of a large audience. On April 29th of the same year, he went on stage at the Municipal Theater of Reggio Emilia to interpret the role of Rodolfo in Puccini’s La Bohème, directed by Francesco Molinari Pradelli. Also with La Bohème, he performed for the first time abroad at the Wiener Staatsoper, the most famous theatre in Vienna, in 1963.

Pavarotti’s debut at La Scala of Milan took place in 1965, where he again performed La Bohème. On this occasion, the tenor was expressly requested by Herbert von Karajan alongside Mirella Freni. 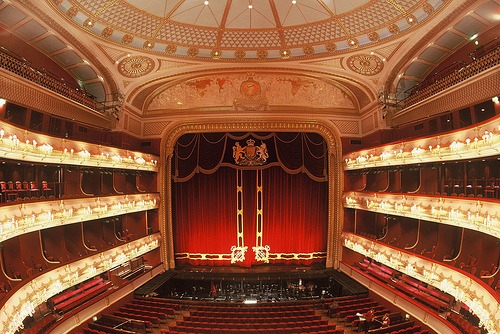 After almost two decades of incredible and uninterrupted success, Luciano performed in the prestigious Royal Opera House of London where, in front of Lady Diana, her husband Charles of England and an audience of 2,000 people, he received five minutes of applause from the audience and four encores on stage. In 1991, in front of 330,000 people, Pavarotti performed at Hyde Park in London which was broadcasted live in Europe and the United States.

In 1992, he collaborated with his friend and colleague Zucchero to record the song Miserere, for the album of the same name. From this collaboration, the famous “Pavarotti & Friends” was born: a charity event organized for ten editions between 1992 and 2003 in Modena to support humanitarian causes.

In 2007, Pavarotti settled in his villa in Modena after his cancer diagnosis where he died on September 6th at the age of 71.

For those who are visiting Modena and would like to retrace the steps of the Master’s life, there are three places that cannot be missed.

The first obligatory stop is the house where Pavarotti lived the last years of his life which has been transformed into a museum. Purchased in the mid-eighties, it’s where he raised horses, building stables and opening a riding school. The house was designed by the Maestro himself and inside you can see memorabilia from a forty-year long career. His most famous stage clothes, photos, and videos, numerous prizes and awards, personal objects and unique artifacts created by blacksmiths, carpenters, and artisans from all over Italy that collaborated in the construction of the building. 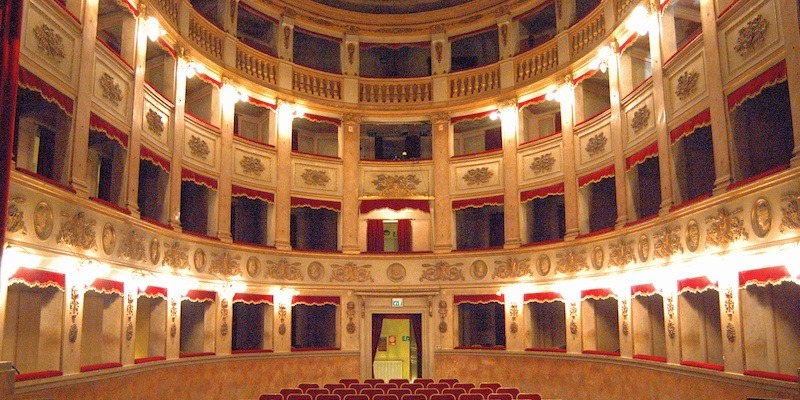 After a twenty-minute drive, you can reach the Teatro Comunale Luciano Pavarotti, the main opera house in Modena. Initially known as the Teatro dell’Illustrissima Comunità (Theater of the Most Illustrious Community), it subsequently changed to Teatro Comunale (Community Theatre of Modena) and was then named after the Maestro three months after his death. It was here that in the 1960-1961 opera season, Luciano Pavarotti performed in La Bohéme, four days after his great debut in Reggio Emilia as the winner of the “Achille Peri” International Singing Competition.

The theater, planned in 1838, was built on the initiative of the podestà of Modena, with the contribution of Duke Francesco IV and under the direction of architect Francesco Vandelli. It was inaugurated three years later on October 2nd, 1841. After the Second World War, besides opera, it started housing prose, concerts, and ballets as well. The façade is in neoclassical style, with a portico with Doric columns corresponding to nine arches. The windows above the portico are surmounted by bas-reliefs with a tragic theme, created by Luigi Righi, also the author of a statue placed on the top which represents the “Genius of Modena” in the form of a winged young man. The historical curtain is the work of Adeodato Malatesta. 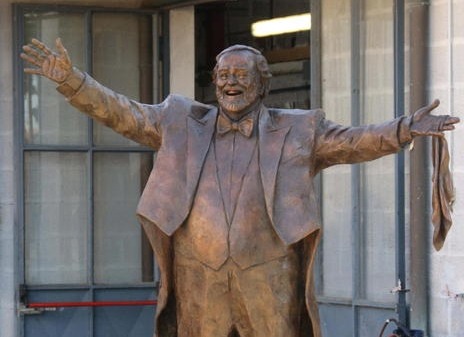 On October 27th, 2017, ten years after his death and coinciding with the start of the opera season, the statue dedicated to Pavarotti was revealed to the public. The life-size bronze work by the sculptor Stefano Pierotti depicts a standing and smiling Luciano, with his arms open and holding a scarf in his left hand, which was so typical after a performance. The statue was placed under the portico of the theater.

Finally, after a short walk in the old town center, I recommend a visit to the Cathedral of Modena, whose full name is the Metropolitan Cathedral of Santa Maria Assunta in Cielo and San Geminiano. A masterpiece of Romanesque style, the Cathedral was built by the architect Lanfranco on the site of San Geminiano’s tomb, patron saint of Modena. On its side, 86.12 meters high and clearly visible from any cardinal point, the “Ghirlandina” bell tower is the true symbol of Modena. In 1997, along with the Cathedral and the nearby “Piazza Grande”, it was included by UNESCO in the list of Italian Heritage Sites.

Inside the Cathedral, on the occasion of the tenth anniversary of Luciano Pavarotti’s death, Messa Da Requiem by Giuseppe Verdi started the cycle of events dedicated to the Maestro’s memory. Messa, a song particularly loved by the tenor, considering his memorable interpretations of it, was performed by the Choir of Parma accompanied by the Opera Italiana Orchestra conducted by Stefano Ranzani. The artistic director of the event was Maestro Leone Magiera who was by Pavarotti’s side for years in his international performances.