The beautiful city of Ferrara is located in Italy’s Emilia-Romagna region. It may not always be on the top of a tourist’s list when visiting Italy, but we can assure you that it has a lot to offer! After all, it wasn’t named a UNESCO World Heritage Site and an “ideal city” as far as urban planning goes for no reason! History, culture, art, cuisine, and its convenient location all make it very attractive.

Anyone who has visited would agree that the number one attraction is the Este Castle (or Estense Castle) located in the heart of the historic center. This is a massive structure that is still completely intact with its four bastions, drawbridges, and moat. 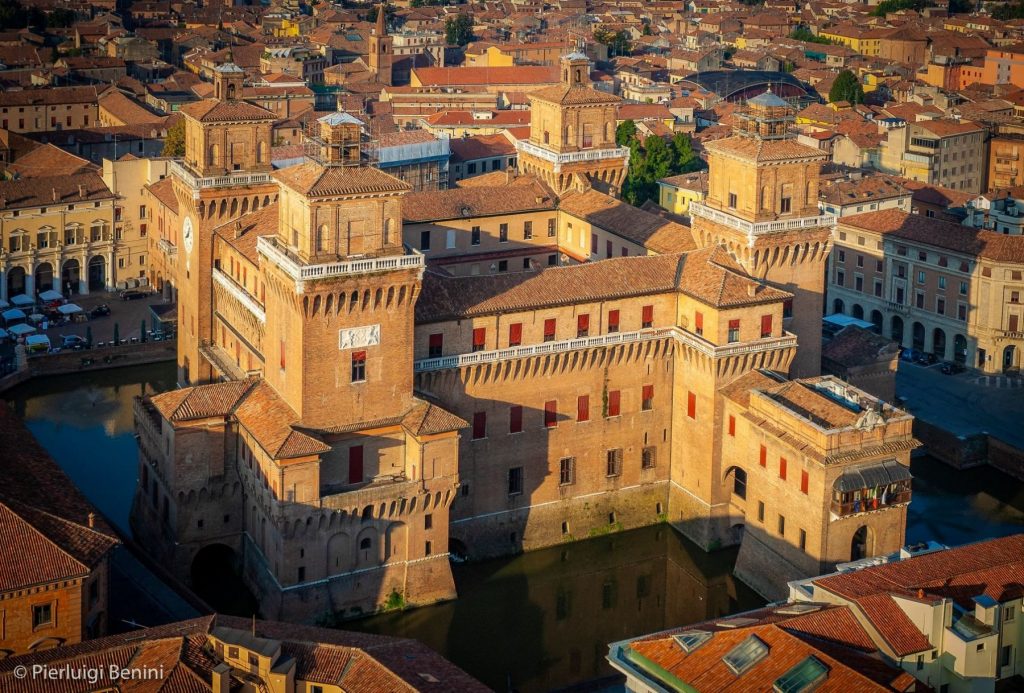 Built in 1385 as the residence of the Este family, the castle also protected Ferrara from constant attacks. It was extensively remodeled in the 15th and 16th centuries and today, visitors can tour the entire complex which includes an impressive collection of armory as well as coats of arms, furniture, art, a dungeon, and much more.

Equally as symbolic of the city as the castle is the Duomo of San Giorgio (St. George). Located in the heart of the city in the gigantic Piazza delle Erbe, the facade alone will take your breath away. Consecrated in 1135, it is one of the finest examples of Romanesque architecture. Having been renovated numerous times over the centuries, it is an elegant mix of various architectural styles including Gothic, Renaissance, and Baroque. There is also a museum with numerous masterpieces including Jacopo della Quercia’s Madonna della melagrana. 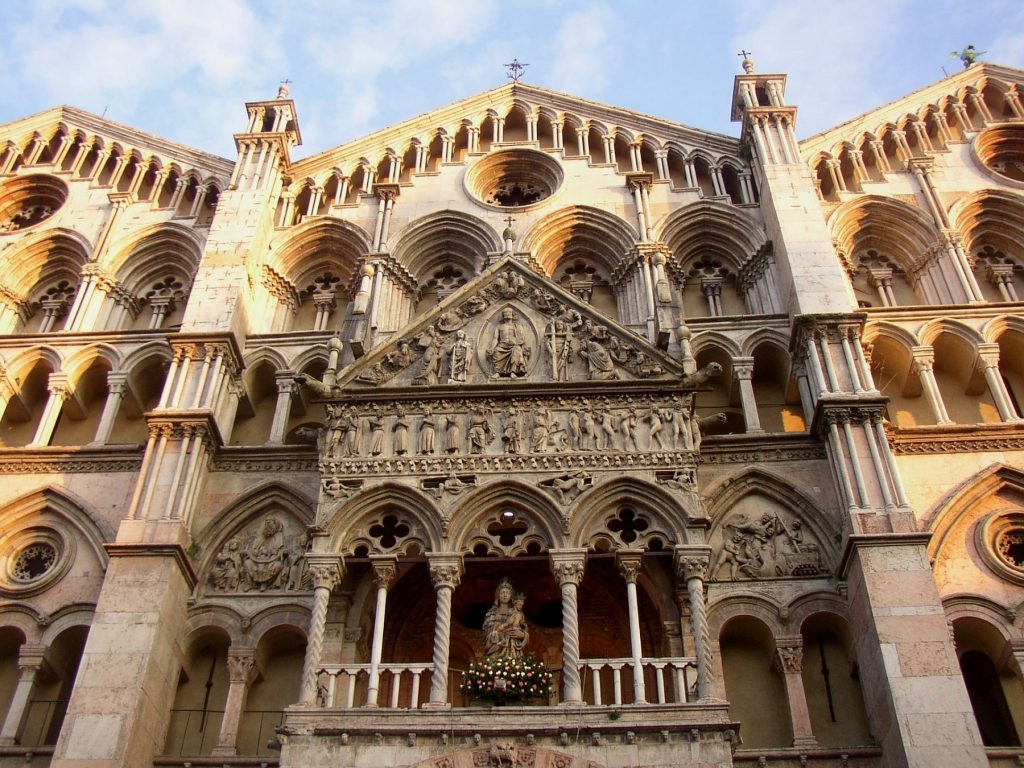 Within the Piazza delle Erbe, you’ll also see the other major historic buildings of Ferrara including the Municipio (or the Town Hall) which dates to the 15th century and also served as an Este family residence. In the same piazza, you’ll also find the famous Palazzo della Ragione (Palace of Reason) with its tower which date to the 13th and 14th centuries and served as the courthouse.

The Este family enjoyed living the high life and many additional palaces were built solely for the purpose of luxury and opulence. One of these is the Palazzo Schifanoia which literally derives from the Italian for “to escape boredom”. It was originally built in 1385 and later expanded in Renaissance style in the 15th century. Today, it is a museum with various permanent and temporary exhibitions.

About a 25-minute walk from the castle lies this stunning Benedictine monastery. It was founded in the 13th century by Beatrice d’Este who later became a saint. Gregorian chants can still be heard here by the nuns during mass and there are also fantastic frescoes in Giotto style as well as cycles dating to the 13th century.

The so-called “Diamond Palace” is a Renaissance palace that also houses the National Gallery of Ferrara (Pinacoteca di Ferrara). If you’re wondering why it’s called the “Diamond Palace”, it’s because the exterior is covered with over 8,000 white marble diamond-shaped blocks. It also houses the Civic Gallery of Modern and Contemporary Art as well as hosting numerous temporary exhibitions throughout the year. 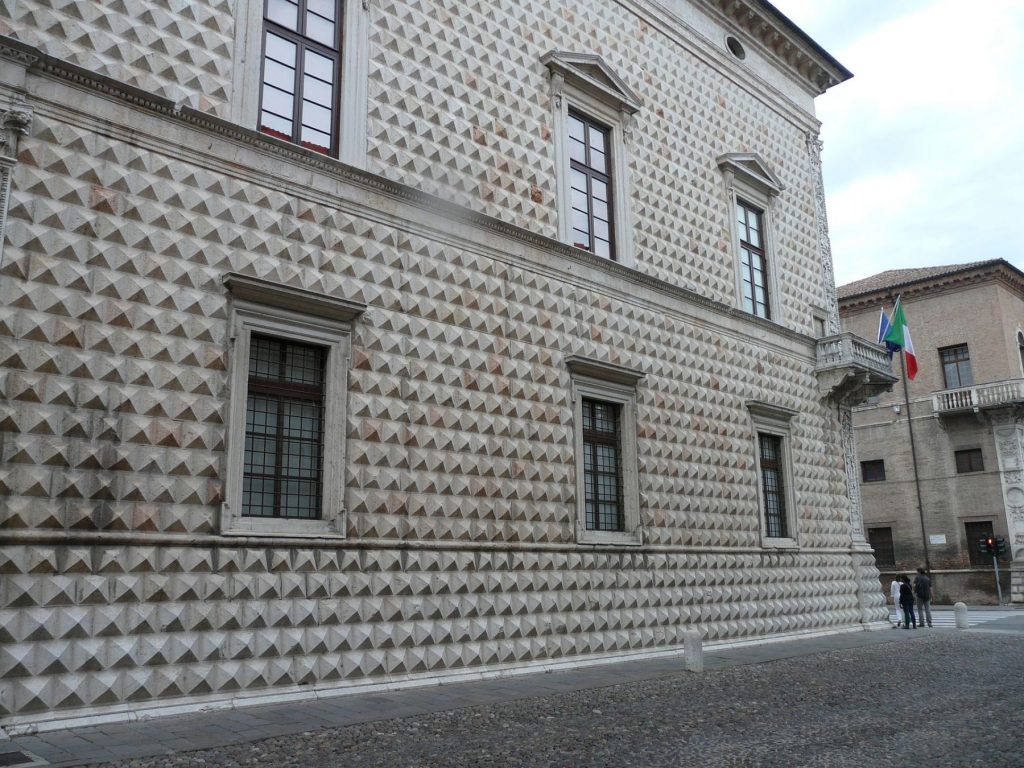 What to Eat in Ferrara

Emilia-Romagna is considered to be the true heart of Italian cuisine and the birthplace of Prosciutto di Parma, lasagna, ragù sauce, tortellini, Parmigiano Reggiano, and so much more.

While you’re in Ferrara, you can taste all these and more including the famous cappellacci di zucca or homemade stuffed pasta with pumpkin. Another dish that you must try while you’re here dates back centuries and is called salama da sugo. It’s a mixture of pork seasoned over a very long time with exotic spices like nutmeg and cloves and red wine. Delizioso! As far as wine goes, by far the most famous is the bubbly Lambrusco.

Just an hour away is the city of Modena, home of luxury car brands like Ferrari, Lamborghini, and many more. Or, head south towards the capital of the Emilia-Romagna region, Bologna! Explore all of the fabulous destinations in the region by clicking here.