A Guide to Friuli’s Churches

Visits to holy places and pilgrimages in the name of faith are perhaps the most ancestral forms of tourism known. Enriched by the spirit of devotion, the yearning for prayer and penance, churches, abbeys, hermitages, and sanctuaries have crossed the millennia with the same baggage of intentions, but never ceasing to update their ways to keep up with the times. 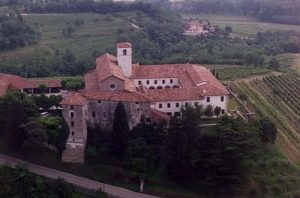 In 1987, in the wake of this evolution, the Council of Europe drew up a list of culturally essential destinations, including religiously relevant destinations, and in 2011, with the Roman festival “Josp Fest” dedicated to the paths of the spirit, here is the breakdown: for the first time in Friuli, the stages of regional religious tourism have been adapted to the pilgrim lifestyle and diversified interests of contemporary pilgrims.

Within a tourism sector that knows no crisis, the sites of religious interest in Friuli are endless. Beyond what the city of Trieste offers as far as varieties of beliefs and places of worship are concerned, there are many of the Christian Catholic faith, such as the Madonna di Rosa Sanctuary in San Vito al Tagliamento (PN), the San Pietro di Rosazzo Abbey in Manzano (UD) or the Convent of S. Antonio in Gemona del Friuli (UD).

Here are three proposals that are particularly unique.

Sanctuary of Monte Grisa in Trieste 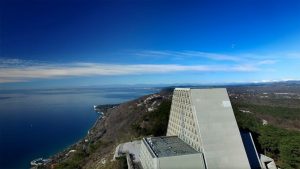 The National Temple to Mary Mother Regina or Sanctuary of Monte Grisa is a temple in reinforced concrete with a curious triangle structure (designed to evoke the letter M of Mary). It was inaugurated in 1966 following a vow made by Bishop Antonio Santin for sparing Trieste from the bombings of the Second World War and dedicated to Mary, Mother and Queen by the will of Pope John XXIII.

A symbol of peace and unity among peoples, on May 1, 1992, it was visited by John Paul II. Despite its not so graceful size that dominates the city of Trieste and its gulf, it is a major pilgrimage destination.

Sanctuary of Barbana in Grado, Gorizia 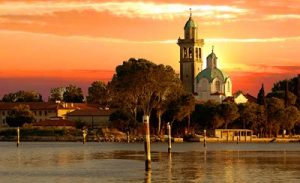 Barbana is a small island in the Grado Lagoon once devoted to the cult of the god Apollo and populated today by Franciscan friars. Legend has it that the birth of this sanctuary (dating back to 582) occurred after the town of Grado miraculously saved itself from the fury of an exceptional storm when an effigy of the Madonna was found near an elm by two hermits, Barbano and Tarilesso.

The church and bell tower that stand in the middle of the island is of relatively recent construction (between 1911 and 1924). Inside, a fifteenth-century wooden statue of the Madonna with child is housed, as well as various other sacred artifacts (mostly seventeenth century).

Every year, the faithful devotees cross the waters of the Lagoon of Grado by boat to reach the Barbana Chapel, located in the forest where the image of the Holy Virgin is thought to have appeared.

Sanctuary of the Beata Vergine di Castelmonte in Prepotto, Udine 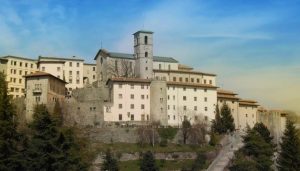 A complex consisting of a fortified village around a large church and some walled buildings, Castelmonte was built on a site probably dedicated to the Madonna and the Archangel Michael. Built around 1175, and used as a shelter by local populations, it has never stopped attracting crowds of devotees of the Marian faith, which is evident by the numerous votive offerings displayed in the corridors.

On the road from Cividale to Castelmonte, fifteen sacred edifices from 1864 (which indicate the 15 mysteries of the Rosary) serve as a stop for the often barefoot pilgrims. They come in prayer and attach small crosses made of intertwined twigs from the surrounding bushes.

With its 300,000 visitors a year, the Sanctuary of Castelmonte exerts an unparalleled attraction. It is the place where spirituality rises to its highest degree; it is a place where mystical contemplation and penance without commotion unite, but with the warmth of a hug between the material world and immaterial eternity.

Post Views: 1,394
Redattore
The MUSE, the Science Museum of Trento
Staying in Palazzuolo sul Senio: a Journey Back in Time at the Torre del Vicario