The Fortress Town of Palmanova 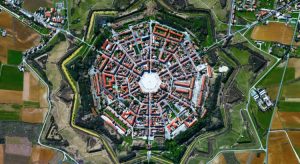 Perhaps many do not know that in the southeastern part of Friuli Venezia Giulia a few kilometers from Udine and Gorizia, there is an incredible town with a polygonal star-shaped fortress called Palmanova.

A real “star on earth” built by the Venetians with the probable intent to erect a fortress city to protect against Turkish and Austrian raids.

Although it is believed that its star shape derives from a shepherd’s dream (or another tale claims it’s from a spiderweb), it is possible that the design is owed to the genius of Leonardo Da Vinci. It’s been historically ascertained that he arrived on-site to inspect it.

Credit has been given to the Venetians who began construction in 1593 and made it the bulwark of a geometrically perfect urban center. Palma (as it was initially called) perfectly reflected the Renaissance model of the “ideal city” from the rigorous philosophical-building conceptions of the ancient Greeks and Romans.

Because of its privileged position below the line of the horizon, designed to give it the character of an impregnable stronghold, it was used to accommodate and centralize the people of the Republic of Venice. Despite this plan, when construction was finished, it ended up that nobody wanted to live in such an unusual and unconventional city. So the government was left with no choice but to populate it with prisoners from Venice. 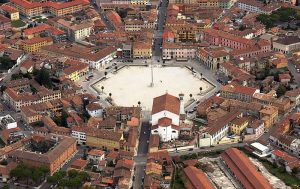 If nowadays the museums (the Historical Civic and the Military) and the seventeenth-century Duomo overlooking the Piazza Grande provide ample evidence of its history and its structure, the sentences engraved on the six sides of the square embody the character of its inhabitants, who survived the French and Austrian dominations. One professes the golden rule and another, “Enjoy your rights but never forget your duties”. 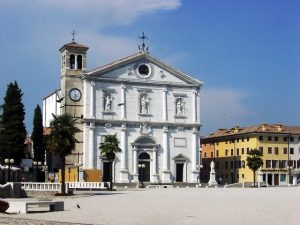 Palmanova (from the original “Palma” or victory, and “nova”, suffix allegedly added by Napoleon Bonaparte) has been a national monument since 1960. In 2017 it was included in the UNESCO World Heritage Sites list as “Venetian Works of Defence between 15th and 17th centuries”.

Together with the Croatian cities of Šibenik and Zadar, the Montenegrin Cattaro as well as the local Peschiera del Garda and Bergamo, is recognized among the six cities that best exemplify the urban defense systems era of the Most Serene Republic of Venice.

But oh how beautiful this “starry city” is!

To visit Palmanova is to find yourself literally in a nine-pointed star: between nine bastions, a perfectly hexagonal center (piazza grande) from which six arterial roads start, and many “doors” to the city (facing respectively Cividale, Udine and Aquileia).

And while wandering about, it is always easy to come across some tantalizing event … 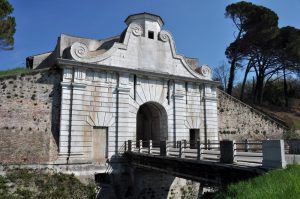 The months of May (with “Flavors of History, History of Flavors”) and of October (with the “Fiera dei Sapori Friulani”) bring to the city the tastes of the most genuine enogastronomy; the whole summer is instead a harbinger of exhibitions, cinema, music, tastings and competitions with “Guarda Che Luna”; July and September are dedicated to historical re-enactments in costume, while the last weekend of November hosts the Alfa Romeo End-of-Season Grand Gala.

Getting lost in the streets of Palmanova is inevitable, but necessary; the feeling of disorientation that comes from it is surreally pleasant.

Post Views: 4,607
Redattore
Island of Ortigia: Art, History and a Beautiful Sea
The LIPU Oasis and the Contemporary Art of Casacalenda