The Trevi Fountain in Italy’s capital city of Rome is the most famous fountain in the entire world. On average, it sees between 7 and 10 million visitors per year! Of course, since Fellini‘s La Dolce Vita (1960), it has been immortalized time and time again in the movies. Today, you won’t be able to splash around in the water and share a passionate kiss like Mastroianni and Anita Ekberg, but it is still impressive just the same. 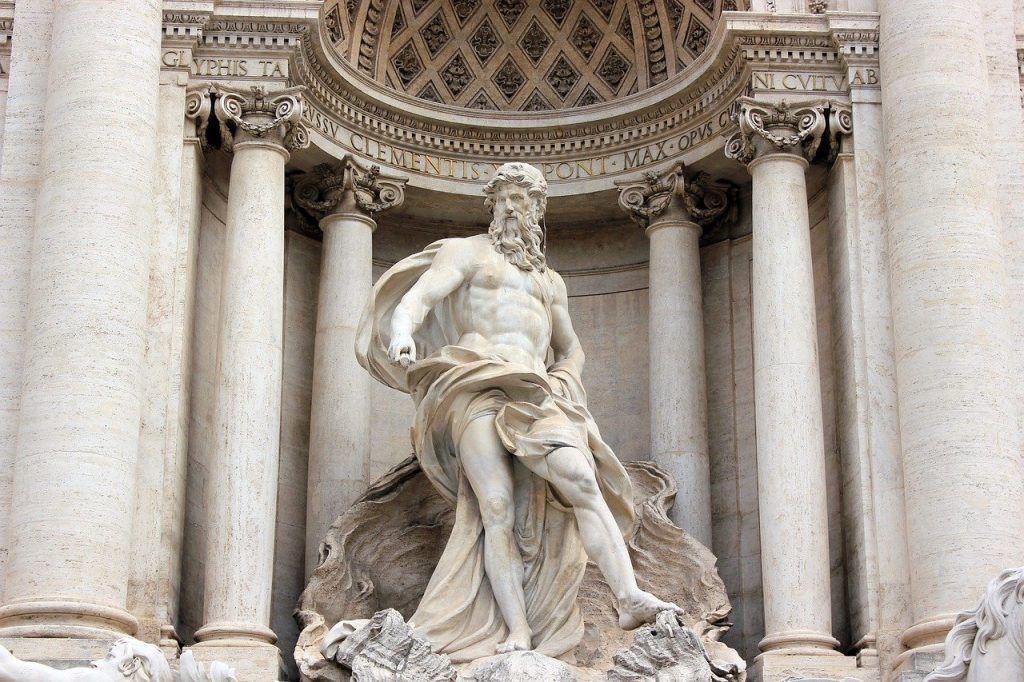 A Coin for Good Luck

Have some pocket change with you because it’s said that whoever tosses a coin into the Trevi Fountain is certain to come back to Rome. This tradition is quite common around the world, but as far as the Trevi Fountain goes, it was actually started by a German archeologist, Wolfgang Helbig, who lived and worked in Rome for over 30 years during the early 19th century. He’s credited with the tradition of turning your back to the fountain, tossing a coin over your shoulder, and quickly turning back around before it hits the water. This will “guarantee” you a return visit. If you toss a second coin, you’ll find romance, and a third, a love that lasts a lifetime. Regardless of whether you toss in one, two, three, or more, all of the proceeds collected from the fountain on a daily basis go directly to various charities in Rome. On an average day, about 3,000 euros is collected adding up to over one million euros per year!

Many people don’t realize that by Italian standards, the Trevi Fountain is not really that old. It was actually finished in 1762 after a thirty-year construction period under the architect Nicola Salvi. Salvi died in 1751 and another architect, Pannini, took over the project. Three key sculptors worked on the massive statues adorning the fountain with the most famous being that of Oceanus done by Pietro Bracci. Considered a late Baroque masterpiece, the Trevi Fountain abuts Palazzo Poli and stands 26 meters high and 49 meters wide.

Another interesting fact is that Trevi’s water is actually sourced from an aqueduct that dates to 19 BCE! Known as Aqua Vergine, the aqueduct was also the water source for the Baths of Agrippa which were used through the 5th century AD and whose can still be seen near the Pantheon. The water was considered potable until just recently and was actually piped into the Vatican.

Visiting today is still as big of a thrill as it was when it was first built almost 300 years ago. It underwent a complete renovation in 2014-2015 when it was restored to its original magnificence. Tucked away between three vias (hence the name Trevi from Italian tre vie) as you are following your GPS walking guide, it almost seems as if it couldn’t possibly be in the vicinity. And then- there it is! Stunning at all times of day, if you possibly can, try to enjoy it in the early morning and again at dark when it is spectacularly lighted.

There is no cost to visit the Trevi Fountain (just your “good luck” coin toss donation will suffice).