When you think of Tuscany you think of lush, green hills and cypress tree-lined roads and of course, sunflower fields; sunflowers as far as the eye can see in some cases. If you haven’t been to Tuscany, I wish I could tell you it was just a myth, just some publicity stunt to lure you here- but it’s true. It’s all true. What I didn’t know was that parts of Tuscany were also known for their lavender fields. Another dream of mine has always been to drive through Provence in early summer to witness this, but now I know my trip can wait because it’s right here in the province of Pisa.

Lavender (Lavandula angustifolia) has a multitude of uses. Romans and Greeks used it to infuse their bathwater (lavandarius, derived from Latin “wash”) and it has been widely used throughout history for medicinal purposes due to its anti-anxiety properties (especially lavender oil).

As early as the 1600s, it was also used in cooking and Queen Elizabeth I supposedly had lavender jam on her table. The possibilities are endless as every part of the plant can be used in both savory and sweet dishes. Interestingly, there is no record of it being used in southern France before the 20th century and the now world-famous spice blend known as herbes de Provence was invented in the 1970s.

I consider myself to be a “lavender-enthusiast” and personally love the aroma in everything from soaps, creams, oils, sachet bags for drawers, and even ice cream! So when I recently heard that there was row after row of this beautiful purple herb less than an hour away, I knew I had to go see it for myself.

And so we did. The winding roads between Orciano Pisano and Pieve di Santa Luce are where you’ll find the “Tuscan Provence”.

The road is terrible- full of potholes and loose chunks of asphalt. But as I look at my surroundings taking it all in, I realize, once again, that the road really doesn’t matter. Every curve, turn, and bend uncovers another piece of the patchwork quilt with its own unique colors, textures, and characteristics, and a farmer waves and warmly smiles. This is all that matters. This is Italy.

I don’t want to be misleading and claim that there are lavender fields as far as the eye can see, but there were enough to satisfy my lavender wanderlust.

Far, far away from the problems of everyday life, we lost ourselves in this isolated paradise even if for just a couple of hours. Round hay bales wound so tightly that they looked as if they would pop if you were to puncture them with a pin proudly guarded each and every plowed field. The only sounds were tractors hard at work and buzzing bees equally laborious. 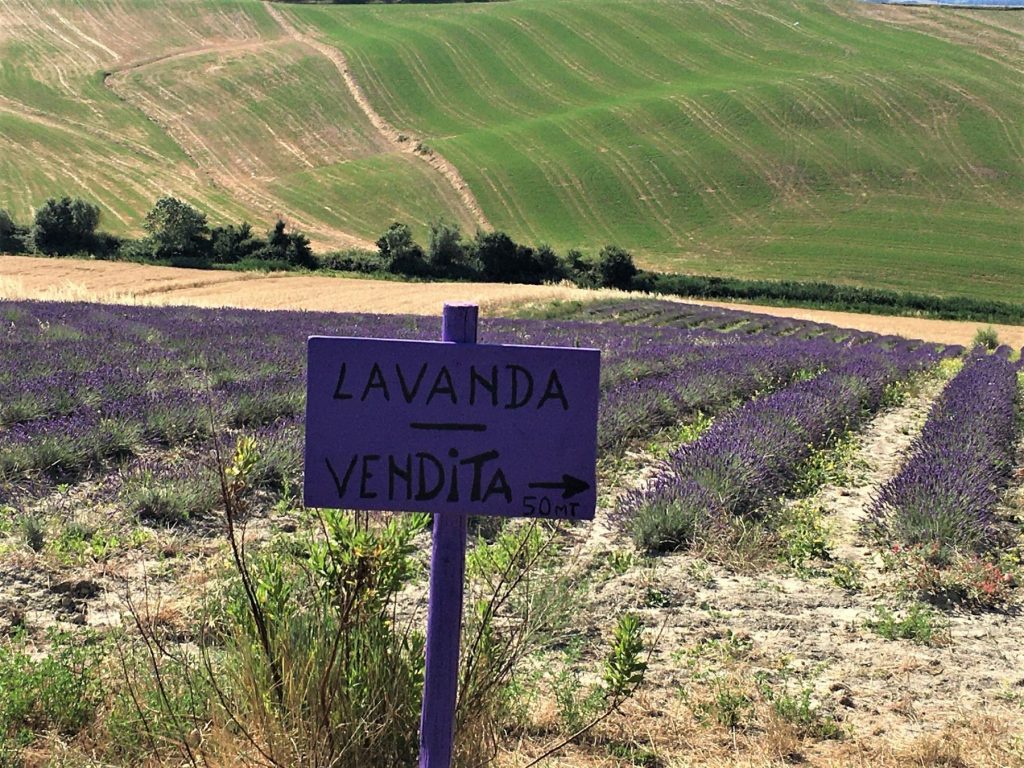 I must not be the only one to have an affinity for this herb because there were numerous other cars stopped along the road snapping pictures and just taking in the view and the aroma in the air. One of the fields had a darling lavender-painted bench perfectly positioned for onlookers to sit down and admire the scenery.

What I have learned about this culture is that whether you’re admiring the brush strokes of the Mona Lisa or a field of herbs, Italians truly understand beauty. And yet, once again, this notion was confirmed.

Article and photos by Marie Contino