Leopardi and the City of Poetry

Recanati is a Medieval walled city in the Marche region, formed in the 12th century from the union of three castles. The result is a longer than usual hilltop town, which makes a striking impression as you approach it by car.

Who Was Giacomo Leopardi? 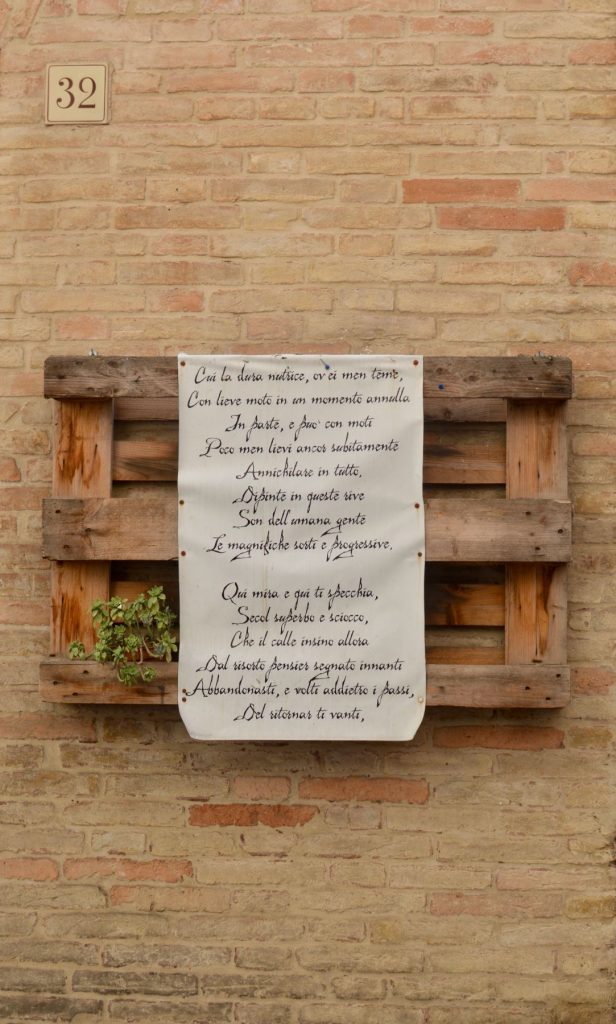 Recanati is famed for Giacomo Leopardi: a renowned poet, philosopher, and philologist (the study of languages). His words are everywhere you look in the town centre, from inscribed stone monuments to kitsch illuminated decorations. Recanati is dubbed the “city of poetry”; it is even on the street signs.

Leopardi was a fascinating man. He had a photographic memory, which allowed him to learn a book every hour and he made his way through his father’s vast library in this way. In his lifetime, he also learnt eight languages, teaching himself Greek and Hebrew from a polyglot Bible at the age of 14. Unfortunately, his self-punishing studying worsened his already ill health. Today, the young people in Recanati joke you will end up hunchbacked and blind like Leopardi if you study too hard.

Recanati has a beautiful main square. All Italian villages, towns, and cities have a main square or piazza, generally with some cafés or bars, and significant buildings or monuments to admire. Recanati’s offering is the Comune di Recanati (town hall), the Torre Civica and a statue of Giacomo Leopardi takes the central spot.

There are two bars from which you can admire the surrounding buildings and people-watch. Café De La Paix is perfect for a mid-morning cappuccino or an aperitivo in the early evening. In the summer, there is seating outside and live music on the weekends.

In the winter, it is a cozy retreat: friendly and full to the brim. Try a warming orange punch, a fruit liqueur served hot. The square also has a fantastic gelateria (of course). The Yogurt delle Alpi ice cream is worth the visit to Recanati alone: delicious honeyed yogurt sprinkled with pistachios. 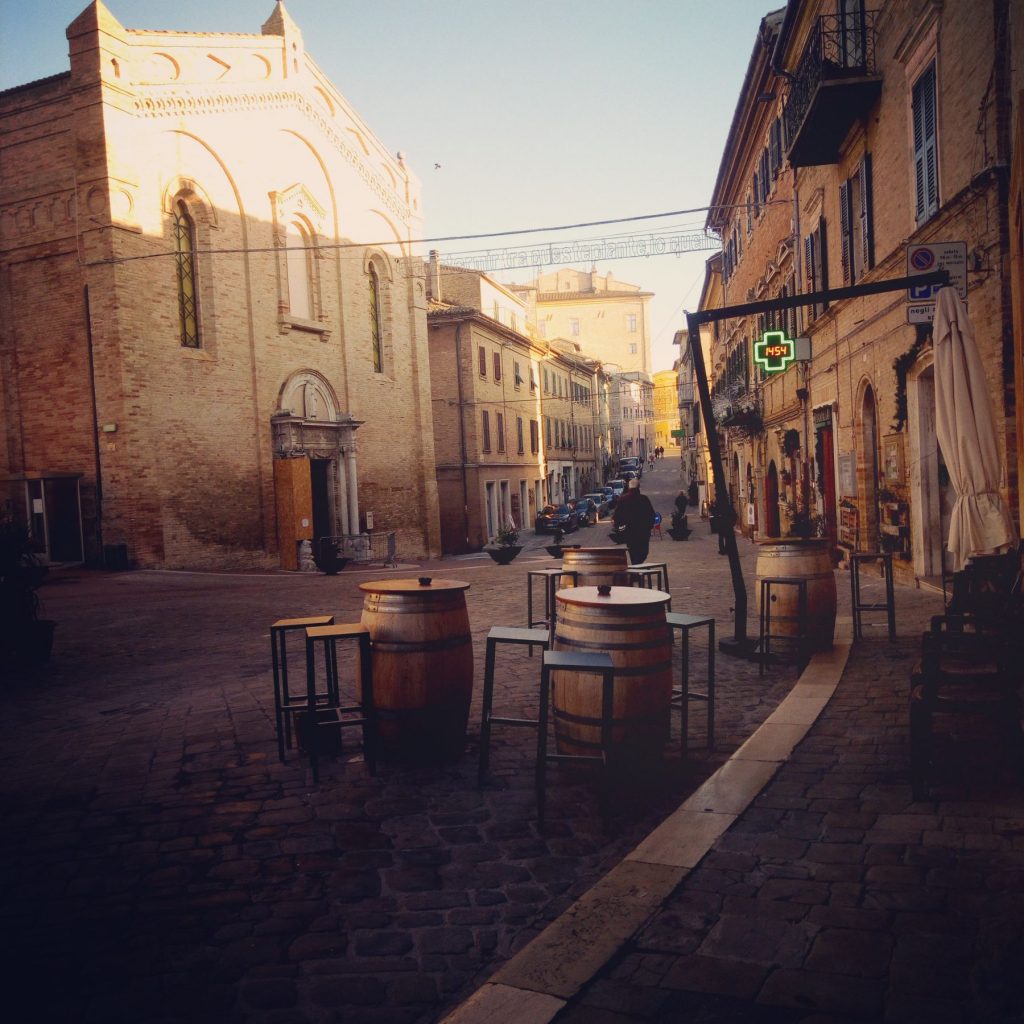 Recanati has a park at either end, both very much worth a stroll through. Villa Colloredo Park holds such delights as a butterfly garden, rose garden, and an area for tortoises. If you haven’t watched a tortoise chomp on lettuce before, you should. It’s very relaxing. Villa Colloredo Park also has a pub called Old Garden. It’s owned by the same people as the Irish-style pub Old Way (Skasa) in the centre of town. They both have a good selection of imported craft ales.

Pincio Park is where you’ll find Colle dell’Infinito, or The Hill of Infinity, Leopardi’s favourite spot which he references in his writing. It does have an exceptional panoramic view of the countryside and the Apennine mountains. It’s a small park with wide avenues of shady trees.

It’s near both Leopardi’s tomb (or part of his tomb) and his old house Casa Leopardi, which includes the family’s library. From the house windows, you can look out across the square as Leopardi did to the house of the coachman. Here lived the coachman’s daughter, about whom Leopardi wrote one of his more famous poems “A Silvia”. 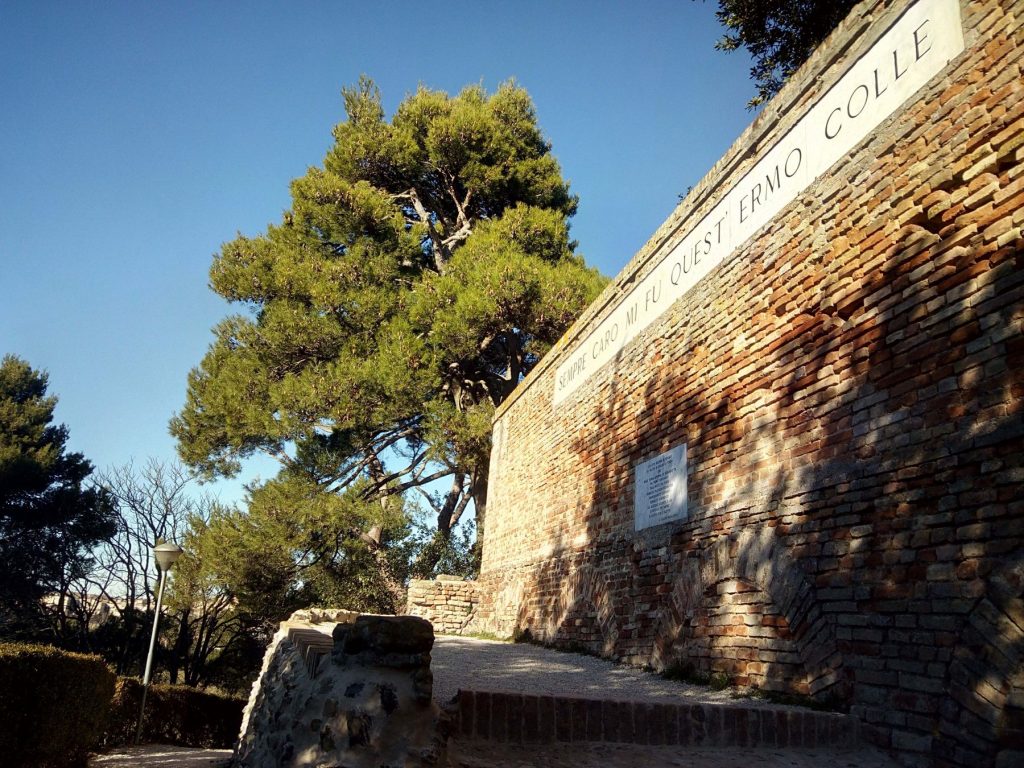 To get to Recanati by public transport there are buses from Porto Recanati, Macerata, and Ancona. There is even a direct bus from the Rome airports and train station, which runs once a day and takes 4 hours.

Other Towns in the Area

If you do visit Recanati, there are plenty of interesting places close by too. The nearby town of Loreto has a magnificent cathedral, known for the Holy House shrine. Osimo has a labyrinth of caves and tunnels. There are plenty of beautiful hilltop towns to wander around, including Montelupone, Montecassiano, and Castelfidardo: the international capital of accordion makers.

You can get to Porto Recanati beach in 20 minutes by bus or car, or a slightly longer drive will take you to the beaches around Monte Conero, which are stunning. They are much wilder, with an impressive view of Monte Conero as you dip your toes in the clear water. The nearby town of Sirolo is a perfect stop-off point for a gelato or an aperitivo after a day at the beach. 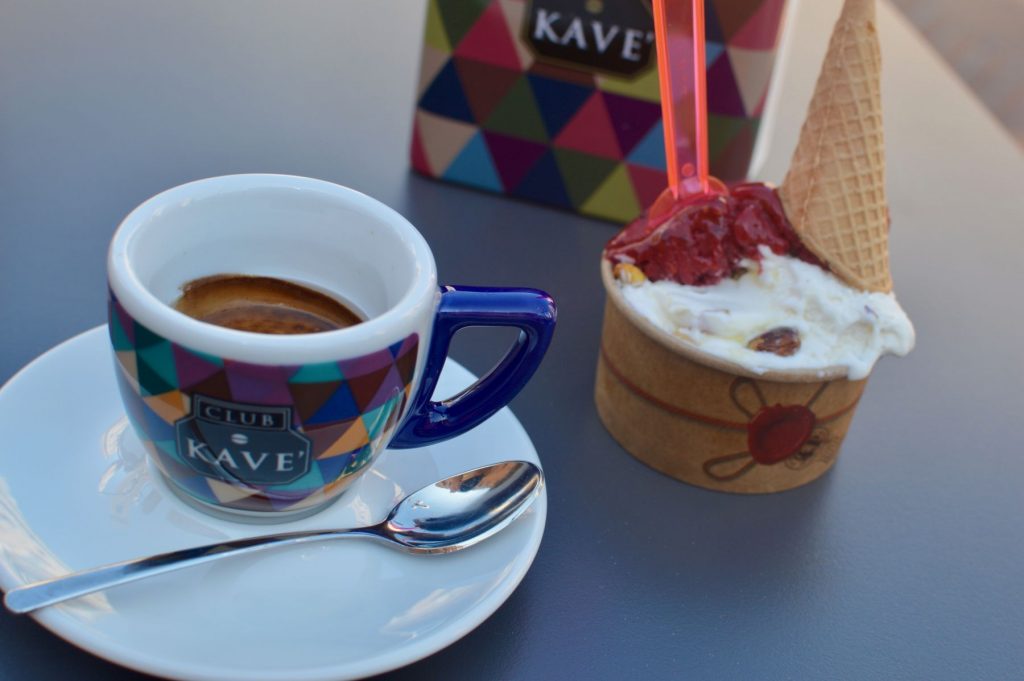 Article and photos by: Ella Beeson