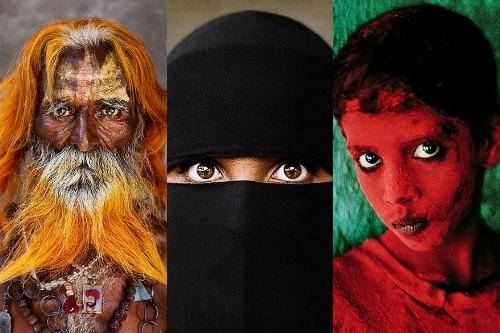 Aosta Valley, Bard – Do you recall the picture of that Afghan girl with clear eyes and dark hair? Here, those traits so marked and so beautiful, without any doubt, have made the photographer Steve McCurry  notorious. The famous “Afghan Girl” photograph was taken in a refugee camp near Pakistan. The image was declared as “the most recognized photograph” in the history of National Geographic magazine and the girl’s face remains an unforgettable memory in the minds of all those who love photography.
For those who never have enough of the works that allow them to have a vision of the concrete life and to become aware of the problems that afflict the planet (McCurry has the ability to trap you inside the image, almost as if you personally lived the moment), from 28 May to 26 November it is possible to go to the Fort of Bard, in the Aosta Valley and see the Steve McCurry Mountain Men. It is an exhibition that addresses the themes of life in mountain areas and the complex interaction between men and the mountains.
The exhibition presents 77 pictures collected by McCurry during its countless travels: from Afghanistan to India, from Brazil to Ethiopia, from the Philippines to Morocco. It also offers a preview of the results of a photographic campaign he did in three periods of scouting and shooting between 2015 and 2016 in the Aosta Valley.

The images represent populations, inhabitants of mountain areas, in general without a precise photographic style, in fact you can see both portraits and landscapes.

McCurry’s photographs are spectacular: you’ll find on one hand portraits, which lead the spectator to go beyond what he sees and allow him to grasp every detail that the photographer wants to hilight, on the other landscapes captured when they stand out more.
The photos of Mccury stand out without any doubt, from a technical point of view, for certain reasons:
• Distance, expressed as a feeling of strangerness of those who look over the picture
• Spontaneity, especially in portraits, of how the artist manages to catch people in absolutely natural poses while dazzling them with his flash.
From an emotional point of view, in my opinion, what is peculiar about Mccurry is the curiosity to create a story about the images. Almost in a way to create a context and an explanation that you can get from every picture.
Copyright photo of the article: greenme.it
Post Views: 1,601
F. Buda
The Pepper Feast between innovation and tradition
That madness called “nonschool”
Meteo Widget Html