Monti Sibillini National Park in the Umbria and Marches Regions

Monti Sibillini National Park spans 70,000 hectares across part of the regions of Umbria and the Marches in central Italy. Like most of Italy’s national parks, Monti Sibillini offers its visitors an array of attractions from stunning landscapes to hilltop villages to spiritual. Let’s find out the major sights you won’t want to miss within the park. 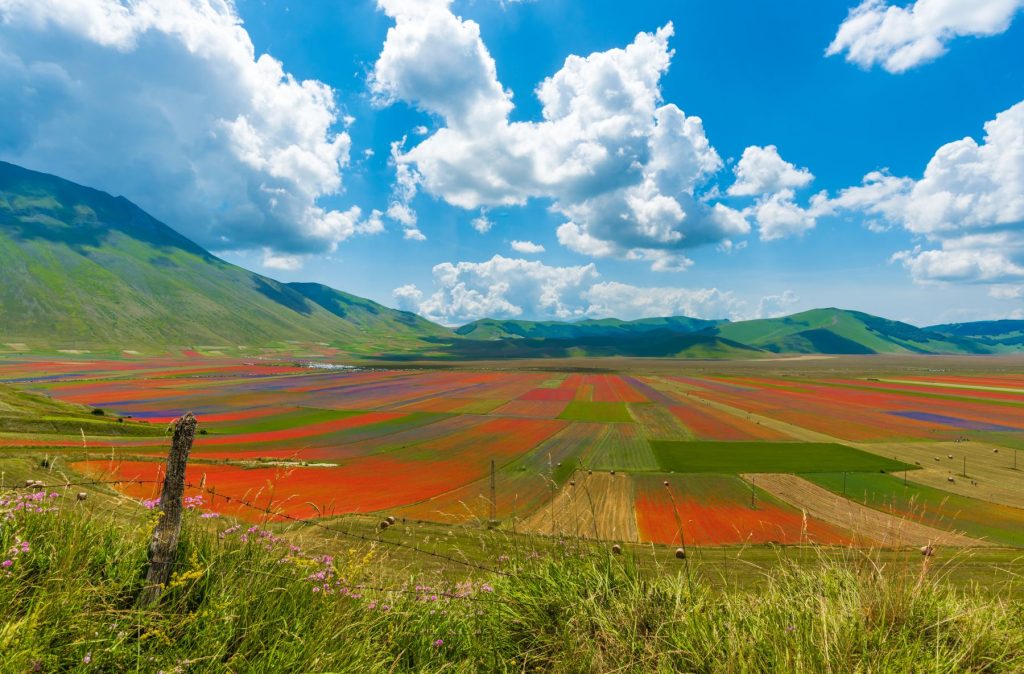 Of course, probably the biggest reason visitors come to Monti Sibillini is because of the stunning landscapes and endless possibilities of enjoying the outdoors. Hiking trails are practically unlimited and range from a casual stroll suitable for anyone to the intense 124 km loop known as the Grande Anello dei Sibillini which winds around the entire mountain chain. Another favorite is the percorso dello zafferano, or the Saffron Trail which is stunning when the crocus flowers are in bloom in early October. It takes over 150 flowers to produce 1 gram of saffron!

Here, Mother Nature doesn’t just “bloom” but it holds actual events, two of which are some of the most well-known in all of Italy for their rare beauty. In Castelluccio di Norcia, roughly between the months of May and July the valleys are covered with a rainbow-colored patchwork quilt containing its most famous crop- lentils. Other blooms include chickpeas (garbanzo beans) as well as lavender and poppies among others.

The area of Piani di Ragnolo (Macerata province) is a rare sight because it contains over 35 native species of orchids as well as other wildflowers which are in their peak from May to June. Remember, all flowers are protected species and cannot be picked while visiting!

Climbing excursions, mountain biking, rafting, and even paragliding and hang gliding are also extremely popular within the park. One of the best areas to experience “flying like an eagle” is in Sarnano between Lake Borgiano and Mount Vettore.

Monte Vettore at 2,479 meters is the highest peak in the park and the highest in the entire Umbro-Marchigiano Apennine range.

There are far too many villages to name in a single article but we think some of the unmissable ones include Visso (where the park’s headquarters are located), Norcia, Castelluccio, and Montefortino.

Visso was supposedly founded 900 years before Rome and happens to be one of the Most Beautiful Villages in Italy. This walled medieval city has a charming historic center and central piazza with beautiful porticos and white stone churches and palaces. 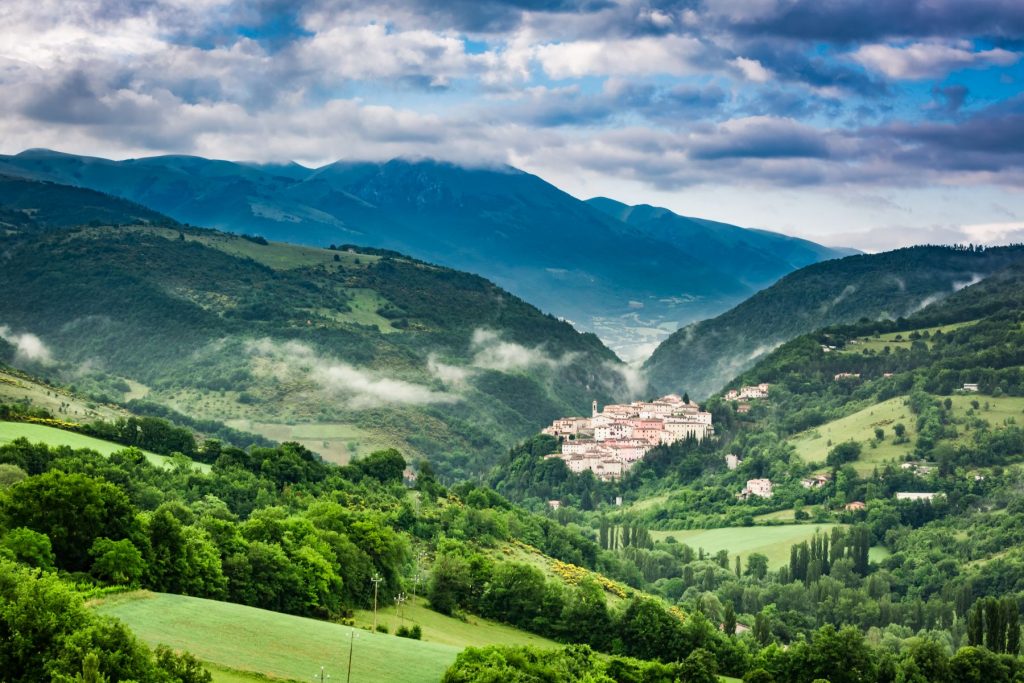 Norcia, the birthplace of Europe’s Patron Saint, Saint Benedict was one of the most fantastic historic centers in all of central Italy. Sadly, it was at the epicenter of the major earthquakes that hit in 2016 and 2017 and underwent major damage to most of its historic center. The area is still visitable but with some restrictions due to the presence of buildings that have yet to be rebuilt and are still unstable.

There are numerous hiking trails and guided excursions that will take visitors along a spiritual journey of some of the most spectacular abbeys and churches within the park. You can also visit them independently of course by car and if you had to choose, the Abbey of Saint Eutizio in Preci and the Sanctuary of Macereto in Visso would probably be our top picks.

Astonishingly, the Abbey was founded in the 5th century by Syrian monks, Santo Spes and Eutizio, who lived as hermits in the grottoes. It is said that St. Benedict himself actually came here to pray with them before founding his own monastery. Sadly, the abbey was almost completely destroyed in the 2017 earthquake and has begun a restoration project as of 2020. 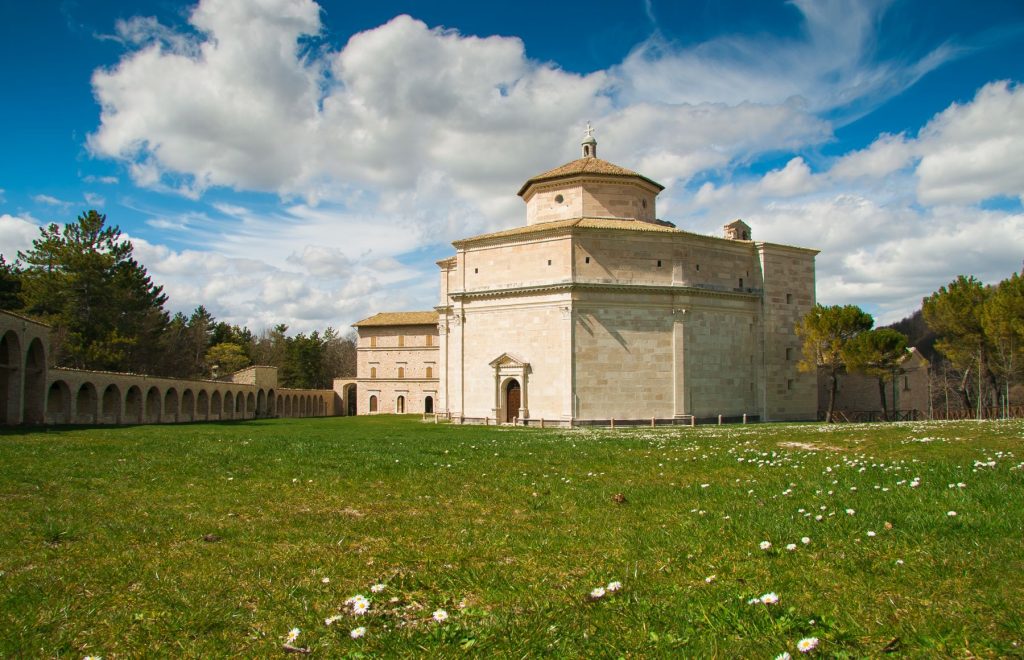 The Sanctuary of Macereto (of “mercy”) is a Marian Sanctuary built between the 15th and 16th centuries. The interior is no longer visitable due to earthquake damage but the grounds and exterior are still worth the visit.

Visit the official website of the Monti Sibillini National Park as well as Umbria Tourism.

What are you waiting for?
Book your room at the Santa Serena in Cerreto di Spoleto located just 20 minutes away from the park!