Orvieto: the Magnificent City Rising up from the Rock

Rising up out of the earth like a fictitious kingdom from The Lord of the Rings, Orvieto stands proud and tall. We are in southern Umbria in the Paglia valley named after its river and not far away from the largest volcanic crater in Europe- Lake Bolsena. Orvieto’s geology alone would be enough reason to visit this magnificent city, but there’s more…so much more. 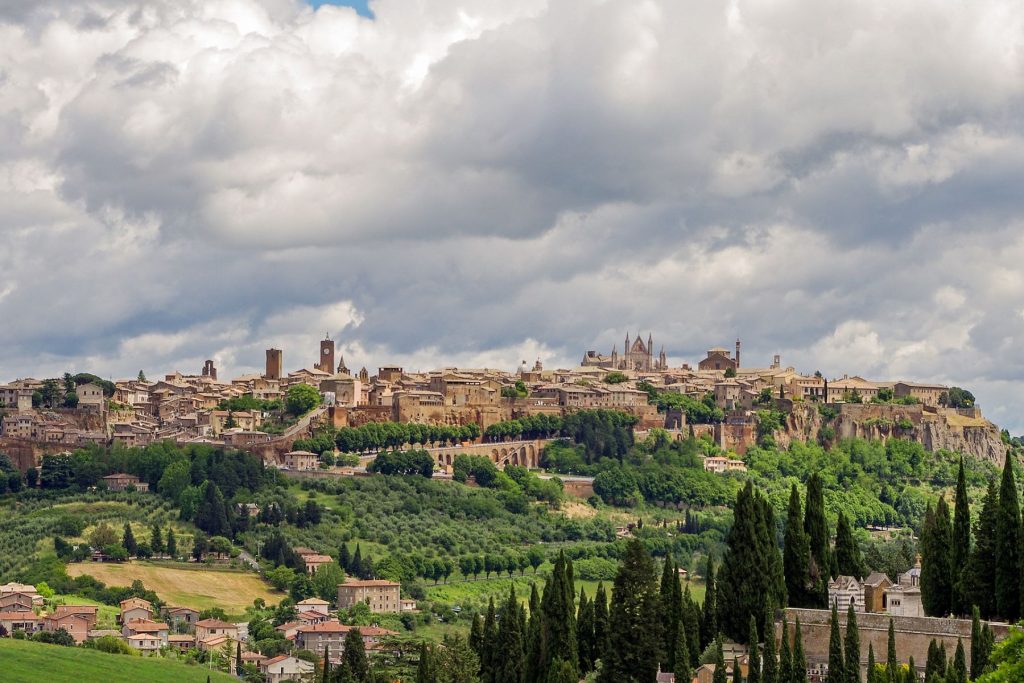 Vulcanic events and erosion resulted in the formation of Orvieto’s massive tuff cliff. It was the Etruscans who were probably the first to settle here and build the magnificent city of Velzna. By the 3rd century BC, it was the Roman city of urbs vitus until the fall of the Roman Empire. Orvieto was ruled by the Goths and then the Lombards and by the 13th century, it was a major city with over 30,000 people.

Every visit to Orvieto begins at its magnificent Duomo. The striking facade in travertine and dark basalt has been compared to that of Siena. It’s hard to decide which is more impressive: the exterior or the frescoes in the San Brizio Chapel. Michelangelo is said to have borrowed some techniques from Luca Signorelli‘s masterpiece, the Last Judgment. 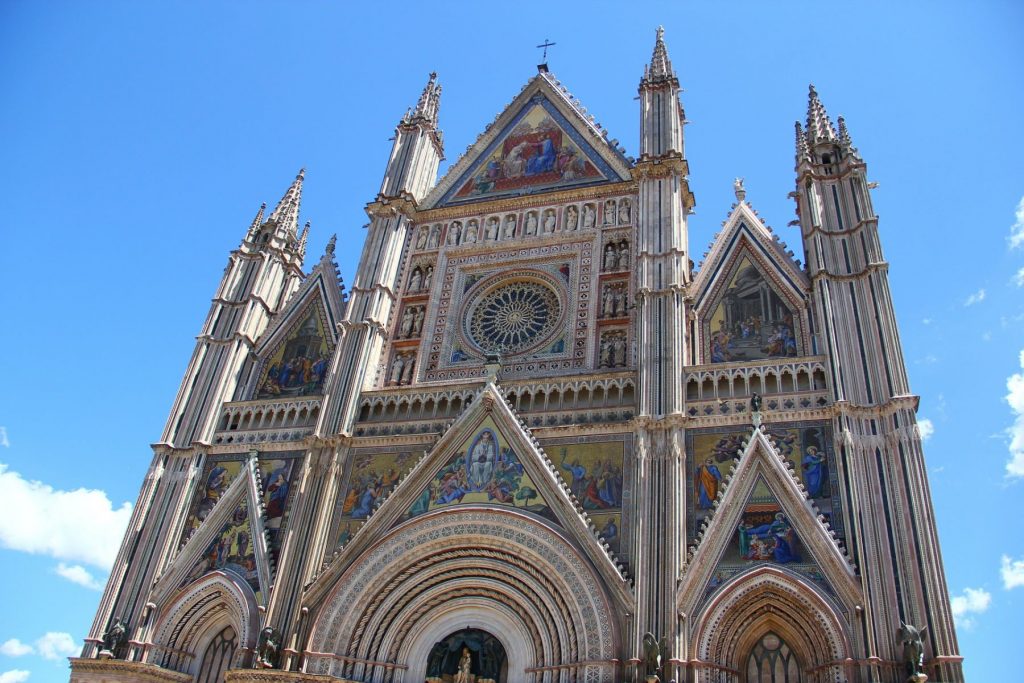 You could easily spend the entire day in Piazza del Duomo as it also houses the museums of the Opera del Duomo, an archaeological museum, and the modern art museum of Emilio Greco. Visitors can purchase a single ticket valid for all three online.

Also within Piazza del Duomo is the starting point for Orvieto Underground. A 45-minute guided tour of Orvieto’s complex subterranean world of tunnels and grottos carved out of the tuff over the last 2,500 years. Truly fascinating!

Speaking of underground- another one of Orvieto’s most memorable sights is the Well of St. Patrick located near the funicular and Orvieto’s fortress. This well is an engineering marvel in that it’s double helix design is 54 meters deep, contains 248 steps, and 70 windows. It was commissioned by Pope Clement VII fearing a siege.

Orvieto is also unique in that, along with Viterbo and Avignon, it was the only city to have papal residences outside of Rome. For this reason, the city is filled with beautiful palaces that date from medieval to Renaissance times.

Another landmark that is an absolute must-see is the Torre del Moro. It’s a clocktower that can be climbed for a stunning, panoramic view! It is also right next to the beautiful Palazzo dei Sette. 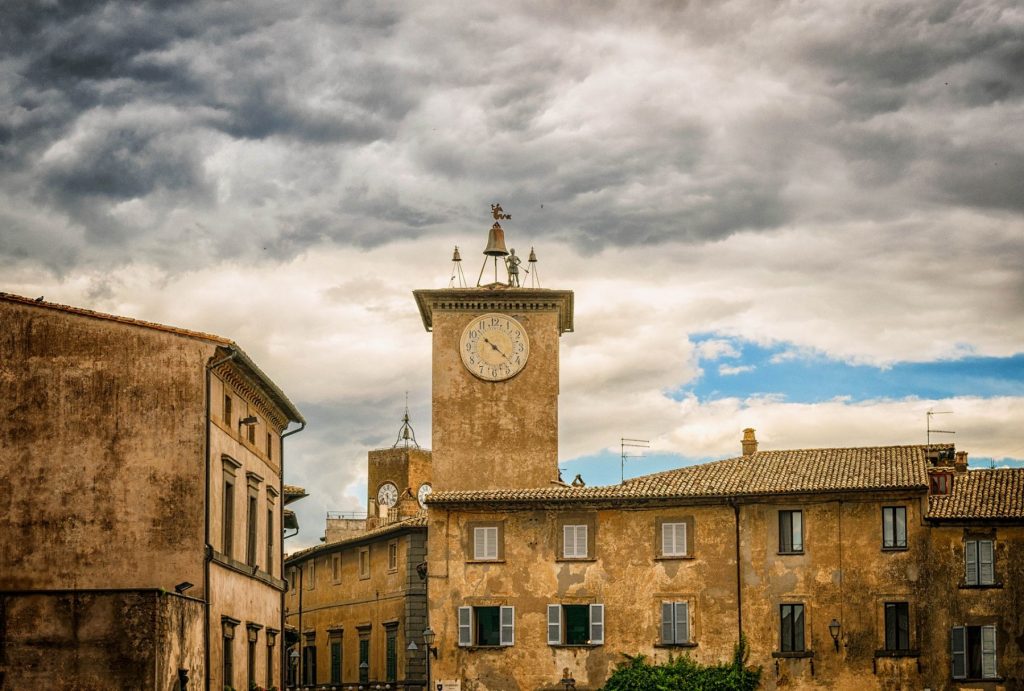 Lastly, if you are a history or archeology buff then you’ll want to visit the Etruscan Museum (Museo Faina) also located in Piazza del Duomo. It has one of the most impressive collections in all of Italy of Etruscan, Greek, and Roman artifacts. Another important site is that of the Etruscan Necropolis of Crocifisso del Tufo containing over 200 tombs. The family names are actually still visible!

No visit to any city in Italy would be complete without immersing yourself in its culinary traditions. Orvieto has been known for thousands of years for its vineyards which produce the white wines Orvieto DOC and Orvieto Classico DOC or Rosso Orvietano DOC.

Dishes are hearty and often include pigeon, black truffle, pork from Norcia, and even Chianina beef. The signature pasta dish is Umbrichelli, a homemade egg pasta with wine added to the dough and topped with amatriciana, ragù, mushroom sauce, or truffles. 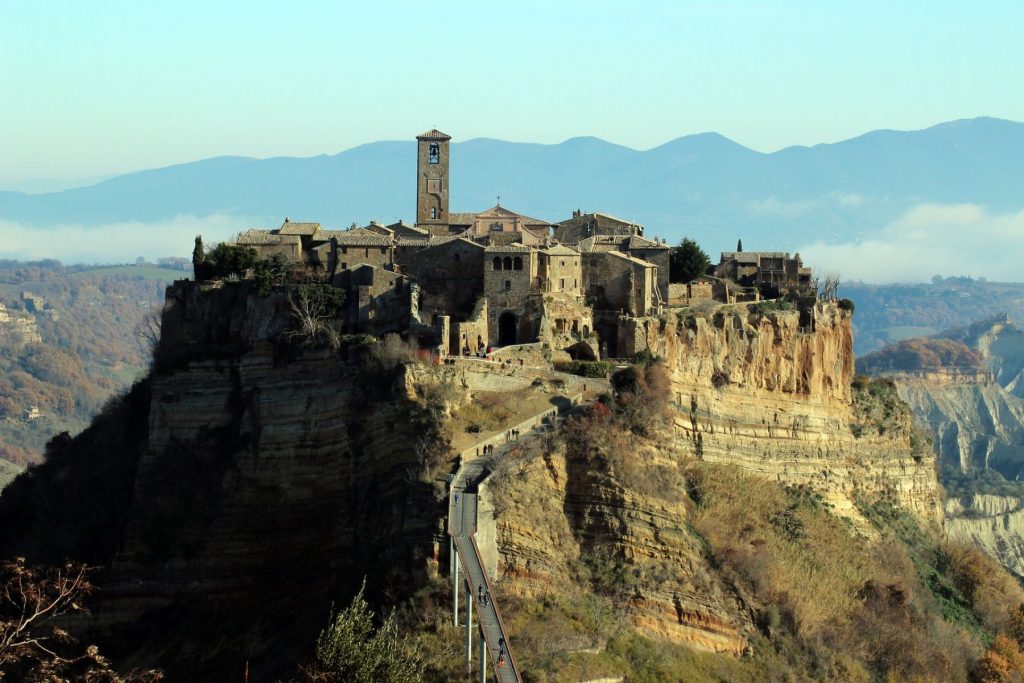 In the vicinity is another magnificent borgo rising up out of the tuff that is known as the “dying city”- Civita di Bagnoregio. It has become one of the most photographed places in the world and will not disappoint!

We hope you enjoy your visit to this city “high and strange” as it was once described by the 14th century poet Fazio degli Uberti, but we are most certain that you will.