Known as Tuscany’s “Little Jerusalem”, the village of Pitigliano in Tuscany’s Grosseto province just might take your breath away. This tiny hamlet has been carved out of a tufo (tuff) rock mass and seems to literally be suspended in the air.

Pitigliano in the Tuscan Maremma

This part of southern Tuscany is known as the Maremma and stretches from Grosseto all the way to the Argentario Coast of the Tyrrhenian Sea. Pitigliano is only about 20 km from the famous hot springs of Saturnia and just 45 km from another spectacular village carved out of tuff, Civita di Bagnoregio.

Inhabited since Neolithic times, eventually, Pitigliano became an important Etruscan and later, Roman city. Much later, it fell under Sienese rule and then to the Grand Duchy of Tuscany. Pitigliano got its name of “Tuscany’s Little Jerusalem” because beginning in the 16th century, it was home to a large Jewish community. Even today, you can still visit the Jewish quarters and the influences of the culture are everywhere.

Officially one of the Most Beautiful Villages in Italy, the sights in Pitigliano are many, yet not overwhelming! You can easily visit in a day or even a half-day.

This is the kind of village that you simply just want to meander through the narrow streets and labyrinth of alleys almost in hopes of getting lost. Everywhere you turn is another beautiful balcony, a characteristic wooden door, or a shop offering some kind of local delicacy or handicraft. 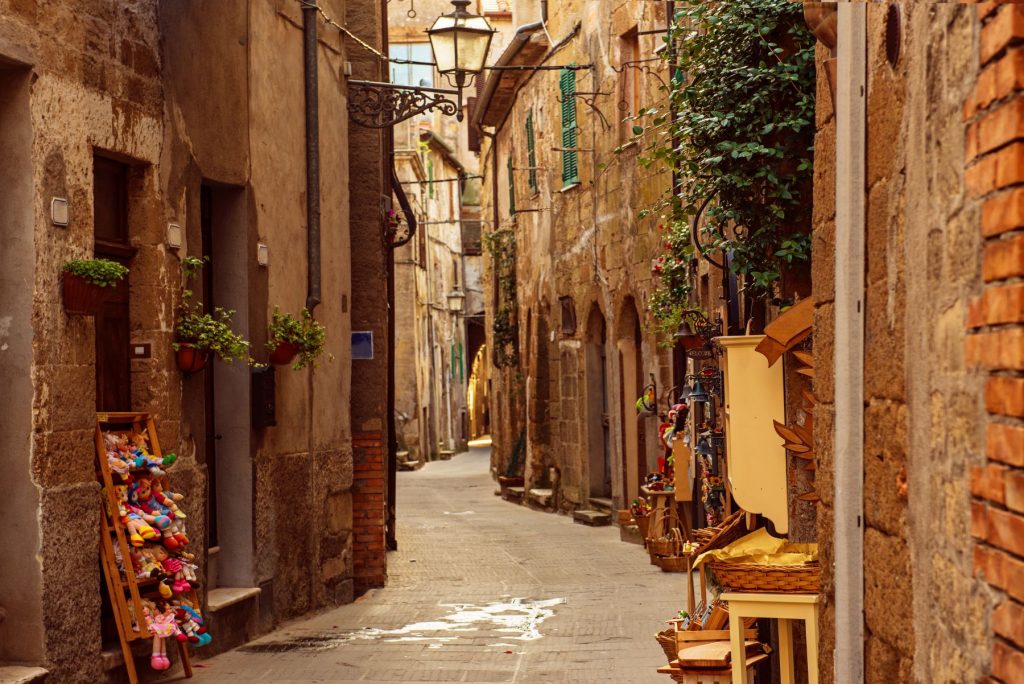 The striking Palazzo Orsini is at the heart of the town center which originally dated to the 1200s under the Aldobrandeschi family rule. Rebuilt by the Orsini family in the 15th century, today it houses two important museums– the Archaeological Museum and the Diocesan Museum of Sacred Art.

Made up of two giant arches resting on 13 smaller arches, the aqueduct that the Medici family had constructed in the mid-1600s is an exceptional feat of engineering. The water feeds into three fountains one of which is the spectacular Fountain of the Seven Spouts (Fontana delle sette cannelle). 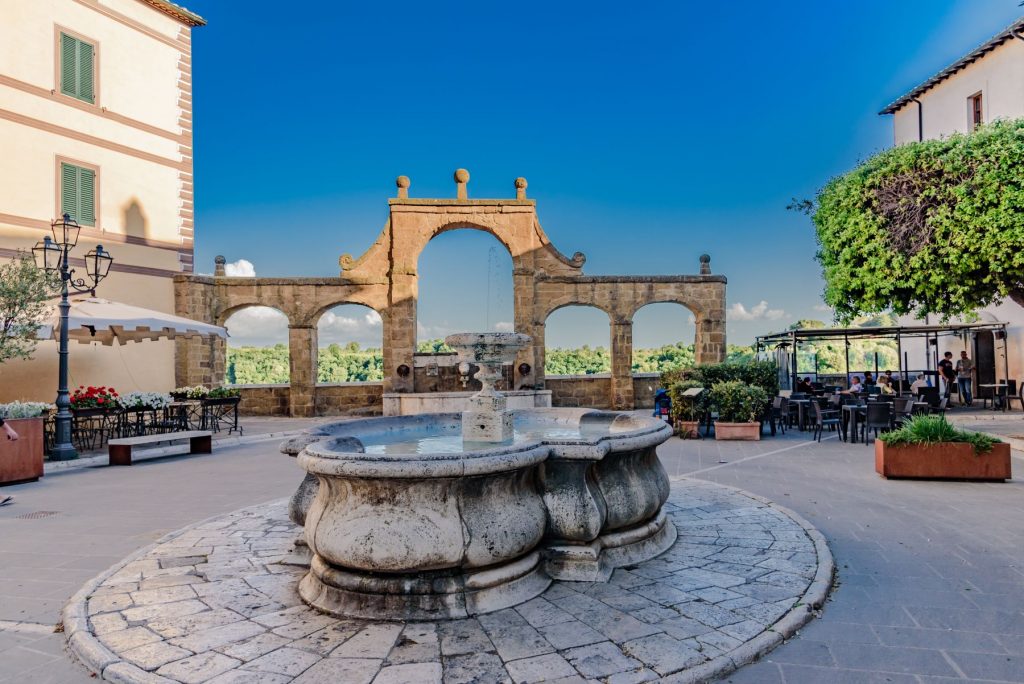 Under Orsini rule, Pitigliano was one of the few cities that did not discriminate against Jewish people and this led to hundreds of immigrants relocating here. In 1598, they built a synagogue which has recently been restored and can be visited today. Pitigliano became a sort of safe-haven even during WWII when many of the locals assisted in hiding Jewish families. There is also a Jewish museum located in the synagogue.

At first glance, the Cathedral of St. Peter and Paul is probably not what you would expect to see in a Medieval Tuscan town. Although the building itself probably existed as early as the 13th century, its Baroque facade was redone in the 1700s. The clock tower next to it was originally the watch tower protecting the city.

This is the oldest church in Pitigliano originally dating to the 12th century. The interior is decorated with beautiful frescoes as well as the family crests of the various ruling families.

Sanctuary of the Madonna delle Grazie

Just before arriving in Pitigliano, along the Strada Statale 74, lies the Madonna delle Grazie Sanctuary. It dates to the 1400s and became a Franciscan monastery over the centuries and an important pilgrimage destination. Make sure to stop here on your way into town as it offers one of the best views of Pitigliano!

The ingenious Etruscans carved a series of roads out of the tufo rock which they used for protection, communication, and transporting goods between their network of cities and their necropolis. Vie Cave connects Pitigliano to Sovana, is about 7 km long and in some places, up to 20 meters deep. It was excavated entirely by hand! You can book guided walking tours or even go on horseback! 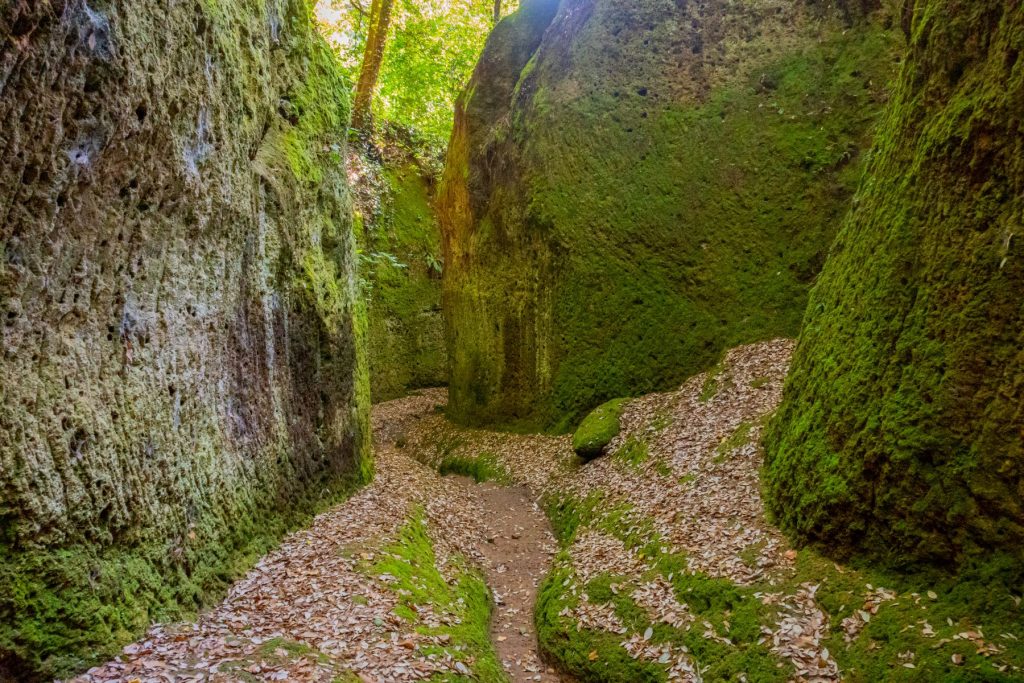 Some of the traditional dishes here are typical of the Maremma area of Tuscany and others are a reflection of the Jewish influence in the town. For example, a famous dessert called Sfratto di Goym, or sometimes simply sfratti, can only be found here and in nearby Sovana.

This delicious cookie shaped like a log has a dark story. The word sfratto derives from the term meaning “to evict”. In the 1600s, Cosimo II issued an order forcing all Jewish residents to be confined to the ghetto of town and the dessert’s shape is a reminder of the batons they used during the round-up.

Another famous dish is a very thin crepe called a migliaccio that is usually served as a dessert. Savory dishes include the famous potato dumpling pasta with wild boar sauce, the gnocchi di pane al cinghiale.

Both red and white wines are produced in the area and the most famous is definitely Bianco di Pitigliano DOC.