We’re exploring wild Calabria, the toe of Italy’s famous boot. There is a stretch of Tyrrhenian coast known as the Riviera dei Cedri, or Riviera of the citrons, that is paradise on earth. We cannot claim that it is “undiscovered” because, in the 21st century, there are very few places, especially in Italy, that are truly untouched by tourism. But, because the closest airport is 150 km away (Lamezia Terme), this part of Calabria is still somewhat out of many tourists’ reach.

The Riviera dei Cedri is about 80 km of coastline that stretches from Tortora to Paola, all encompassed within the large province of Cosenza. The backdrop is the Pollino National Park (the largest in all of Italy) which offers a variety of outdoor experiences for visitors including rafting and canyoning. Little villages dot the inland area, known in Italian as entroterra, which, if one has the means, will truly be the cherry on top of an authentic Calabrian holiday. If you plan to explore the area, you will definitely need a rental car. 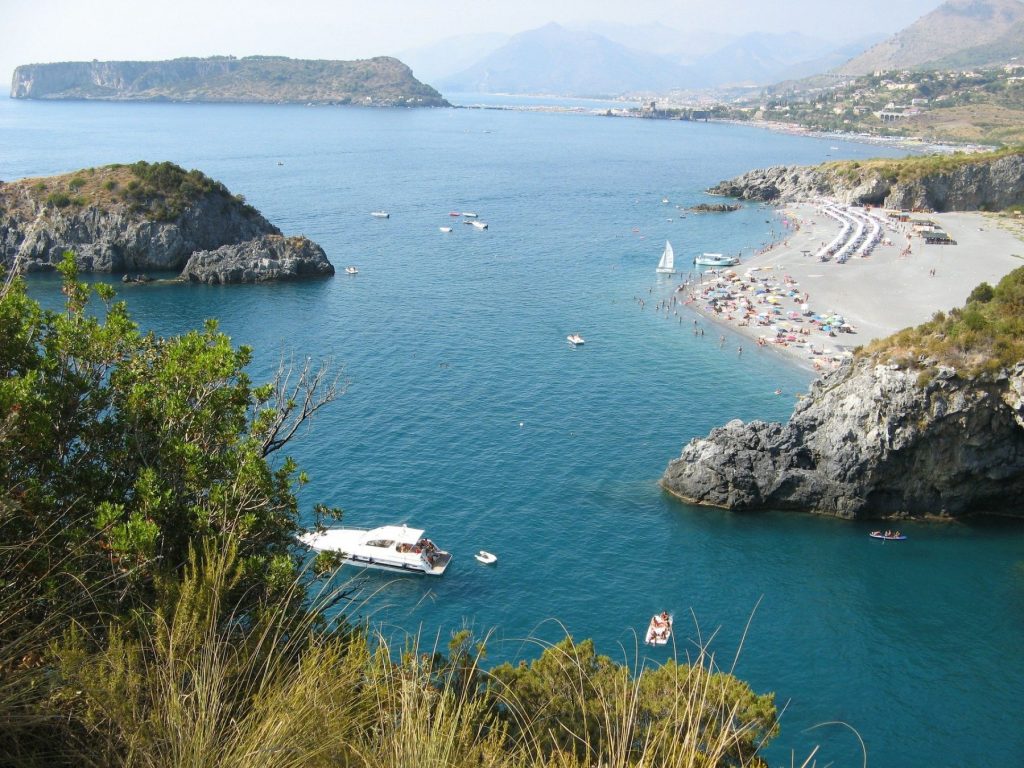 Praia a Mare is one of the larger seaside towns along the Riviera with a population of about 7,000. An old fishing village and port since antiquity, today the locals survive mostly on tourism. In the year 2020, Praia a Mare was awarded both the prestigious Blue Flag and Green Flag for its pristine beaches that are both clean and suitable for young children.

The beach itself is made of small pebbles with a few portions being slightly rocky. If you have tender feet, definitely pack a pair of water shoes. There are plenty of lidos where you can rent an umbrella and chairs for the day, but there are also sections of the beach known as spiaggia libera (literally, “free beach”) where you can set up your own umbrella and towels.

One of the major draws of Praia a Mare is Dino Island or l’Isola di Dino. This is the larger of the two islands off the Calabrian coast and at one point was destined to become the Capri of Calabria. Sadly, the project fell through and the island is dotted with abandoned, unfinished villas. The main draw is the surrounding waters and grottoes.

This is the place to immerse yourself in the true beauty of the area by taking a boat tour. Many will take you exploring into the many grottoes of the island, such as the Grotta Azzurra, the Grotta del Leone, Grotta delle Sardine (for the enormous quantity of sardines), and the Grotta del Monaco. There are also companies that organize scuba diving excursions, although some require an expert level in order to participate.

The Torre di Fiuzza faces Dino Island and is part of an original Angevin construction that protected the coast from Saracen raids.

Praia’s Rocca, or castle, dates to the Norman occupation of the area in the 14th century.

Another experience is visiting an ancient cave sanctuary known as the Santuario della Madonna della Grotta. It can be reached on foot from the town of Praia and offers a stunning view of the sea. Legend has it that the original statue of the Virgin Mary was brought to the grotto by monks who were suffering persecution in Turkey. 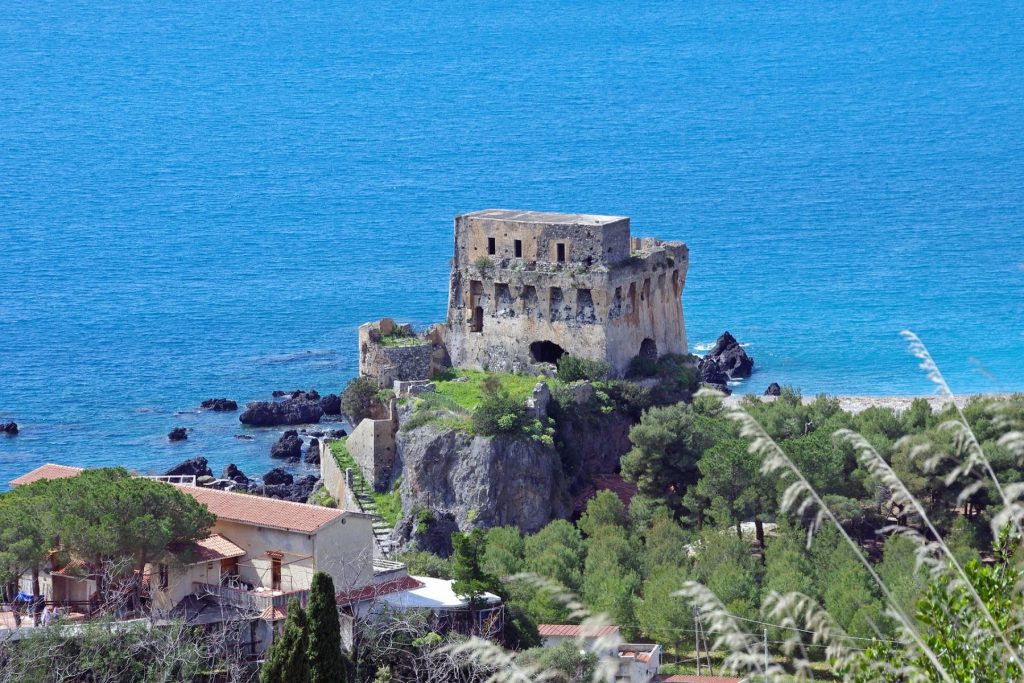 No article about a holiday in Calabria would be complete without a section dedicated to its cuisine. Of course, each area has its specialty but here along the Riviera dei Cedri, the catch of the day is on every menu. Fresh seafood like calamari and octopus as well as all kinds of local fish (especially sardines and anchovies) are prepared in a variety of ways from grilled, marinated, stuffed, sauteed, and deep-fried.

Cedri are citrons, a fruit similar to a lemon but with a much thicker peel and sweeter taste. They are native to this area and so it stands to reason that many of the local dishes, especially desserts, utilize this fruit in their recipes.

Tropea onions are a sweet, red variety that are known throughout the world and are delicious in all kinds of dishes and jams, but especially topped on focaccia bread. 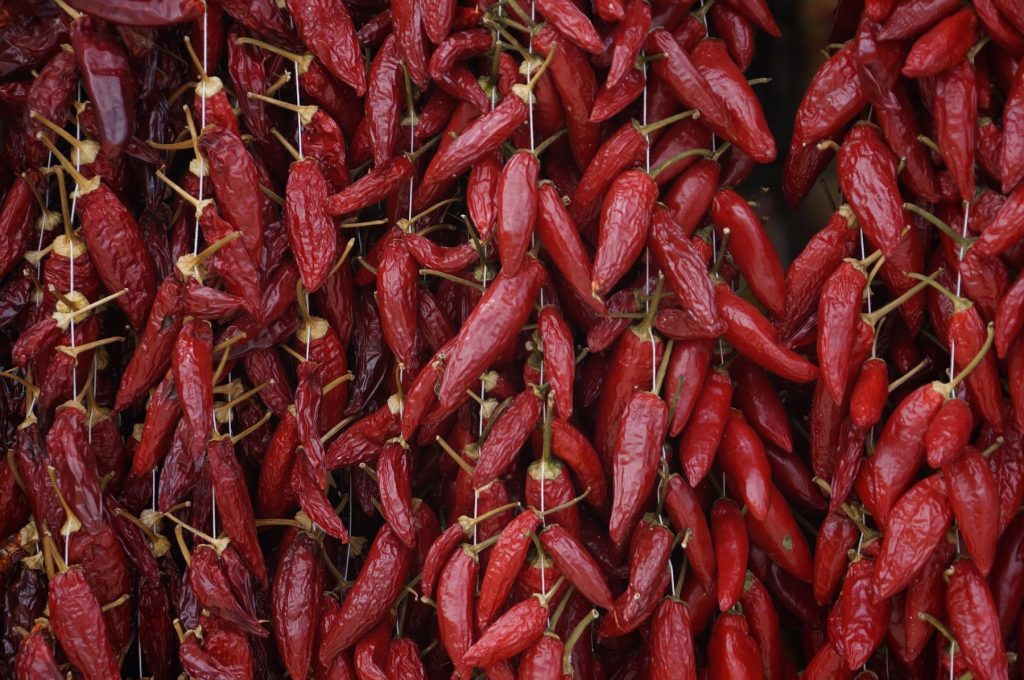 The undisputed king of all Calabrian cuisine is the red pepper, the famous peperoncino. Calabrians like it spicy and the city of Diamante along the Riviera actually boasts the Italian Peperoncino Academy.

What are you waiting for?
Book your stay at Hotel Pian delle Vigne in Praia a Mare