In the southern part of the island of Sicily, the surreal looking city of Ragusa erupts from the hillside. We are in the Val di Noto, where Ragusa is one of seven cities to be included as UNESCO World Heritage Sites. 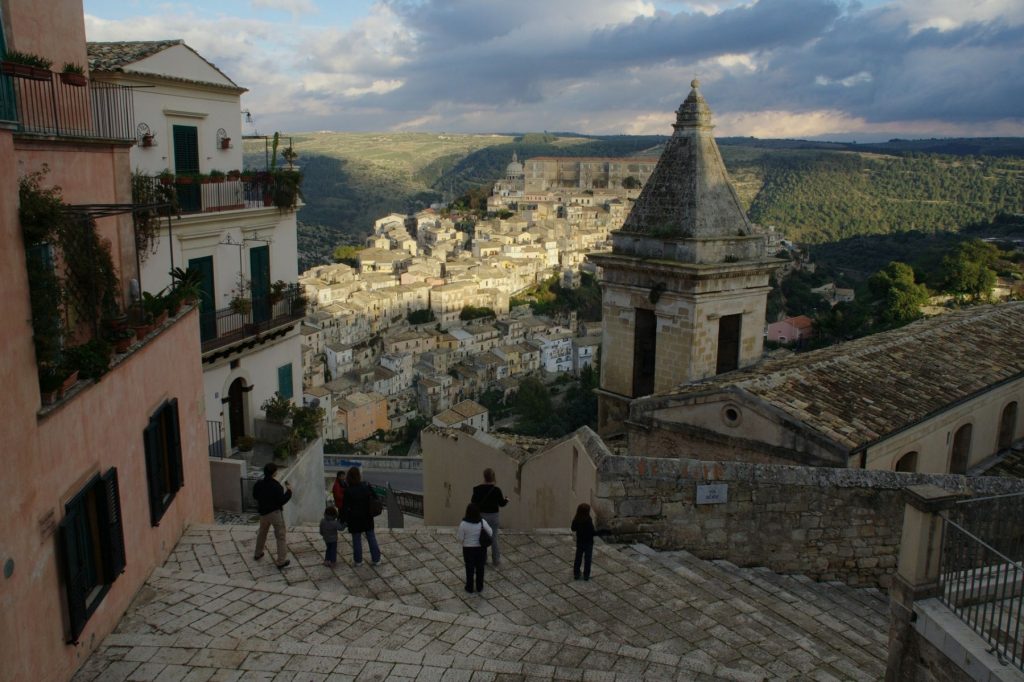 Ragusa is a large city by Italian standards at 75,000 people but as you roam through the whitewashed, limestone alleys, it feels anything but.

As far back as 2,000 BC, this area was populated by the Secel peoples, an ancient Italic tribe that quickly fused with Magna Graecia. Later came the Carthaginians, the Byzantines, the Romans, the Arabs, the Normans, and the Spanish. Ragusa was a true “melting pot” of cultures, languages, and customs over the centuries.

Today, Ragusa is divided into two: ancient Ibla (lower Ragusa) and Ragusa Superiore (upper Ragusa). The reason for the split was that there was a massive earthquake in the late 1600s that killed 5,000 people and demolished the town. Residents rebuilt from the ground up, mostly in Baroque style, creating Ragusa Superiore.

The Valle dei Ponti with its three bridges (including Ponte dei Cappuccini) literally divides the two cities. To experience both sides, you can either cross the bridges or descend hundreds of steps along a picturesque journey into old Ibla. The Church of Santa Maria delle Scale (Mary of the Stairs) appropriately serves as the halfway point between the two cities.

Let’s begin our tour with Ibla or lower Ragusa. Amazingly, in Ibla alone, there are a total of 18 churches and palaces that are UNESCO World Heritage Sites considered a testimony of the “Late Baroque Period“. It would be impossible to mention all of them in one article, but here are the highlights.

As already mentioned, the gateway of sorts between the two cities is the Church of Santa Maria delle Scale which is a must-see. It originally dates to the 14th century, or possibly, even the 13th, when it was founded by the Cistercian order of monks. The original Gothic portion of the church is a testament to the architecture that existed in the area pre-earthquake of 1693. The “newer” portion was built in the 19th century to accommodate the expanding population.

The Duomo of San Giorgio dates to the mid-1700s and is an impressive building with a regal ramp of stairs leading up to its massive doors. Those of San Giuseppe, San Giacomo the Apostle, Santa Maria dell’Itria, and San Rocco are also all worthy of a visit if you enjoy Baroque architecture. 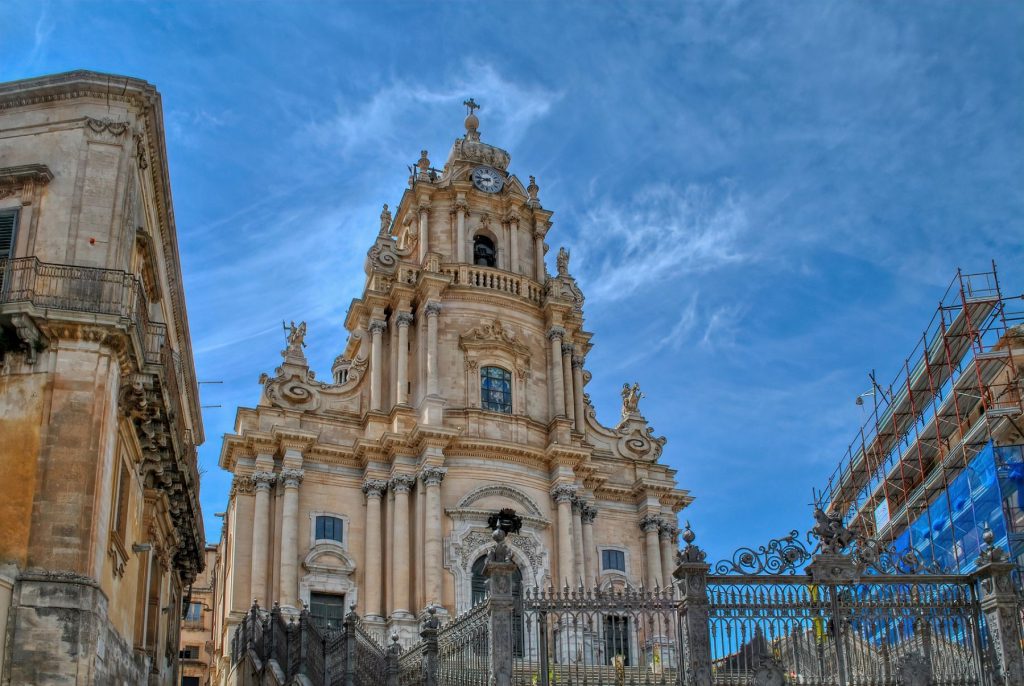 The only remaining Catalan arch in Ragusa, known as the Portal of San Giorgio dates to the mid-1300s and is the absolute symbol of Ragusa. The church collapsed in the earthquake leaving only the portal behind. Commissioned by the Chiaramonte family, the carvings in the limestone are intricate and nothing short of amazing.

At the furthest end of Ibla lies the beautiful Ibleo Garden. Part of the villa of Ibla Ragusa, these lush gardens contain exotic plant and animal species as well as three churches (San Giacomo the Apostle, a Capuchin Monastery, and Sant’Agata). Probably the best part of the gardens is the spectacular view from an elevation of about 350 meters over the Irminio valley and the surrounding mountains.

Museums and archaeological sites also abound in Ragusa and include that of the Castle of Donnafugata and Caucana (actually in Santa Croce Camerina). Donnafugata Castle (literally translating to “fleeing woman”) dates back to Princess Bianca of Navarra’s imprisonment here and her eventual escape into the surrounding countryside.

No trip to Ragusa would be complete without visiting the sea. Just 20 minutes from the city is Ragusa’s Marina with its golden sandy beaches and crystal clear shallow waters perfect for the entire family. Consistently awarded with the Blue Flag, it is one of the most popular areas in all of Sicily. 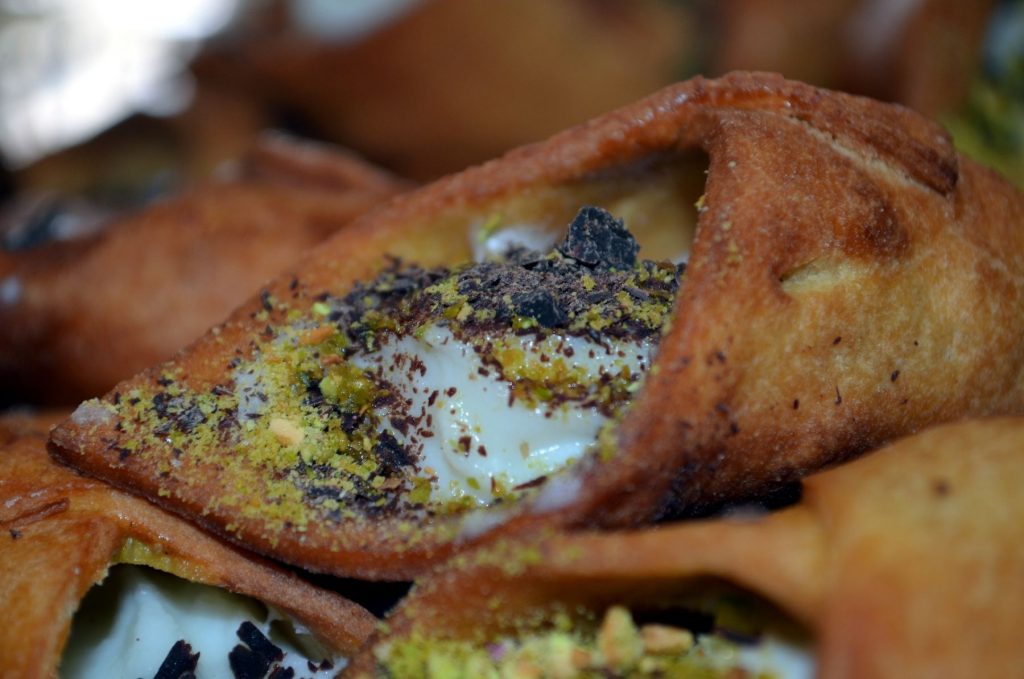 What to Eat in Ragusa

And last, but certainly not least- Ragusa’s culinary traditions. Although it’s very close to the sea, it is still considered an agricultural heartland and its classic dishes are evidence of this.

Some of the most famous cheeses in Italy are the prized caciocavallo and provolone. Pasta dishes include homemade varieties and ricotta stuffed ravioli topped with braised pork sauces. Pork is widely-used here as well as tripe. Fava beans and other legumes are also included in a lot of traditional dishes.

Now for the fun part: the sweets. Almonds, figs, honey, and ricotta are all ingredients in many of the desserts here like the inevitable cannoli for which the entire island of Sicily is famous. Another interesting ingredient that is commonly found is carob which grows very well in this climate.