Rimini in Emilia-Romagna: More than Just a Pretty Beach

Rimini is the hottest beach destination along the coast of the Emilia-Romagna region. Known for its endless stretches of fine, sandy beaches, restaurants and cafes, and nightclubs, it is both a family holiday destination as well as a party hub for youth.

Rimini is also so much more than just mare! Very few people realize that Rimini was once one of the most important Roman cities in northern Italy. The Ariminus river (now, the Marecchia) which empties into the Adriatic Sea became an important stronghold in third-century BC Rome as they defended their territory against the Gauls. From here, three major Roman roads also departed: the Flaminia, the Emilia, and the Popilia-Annia. 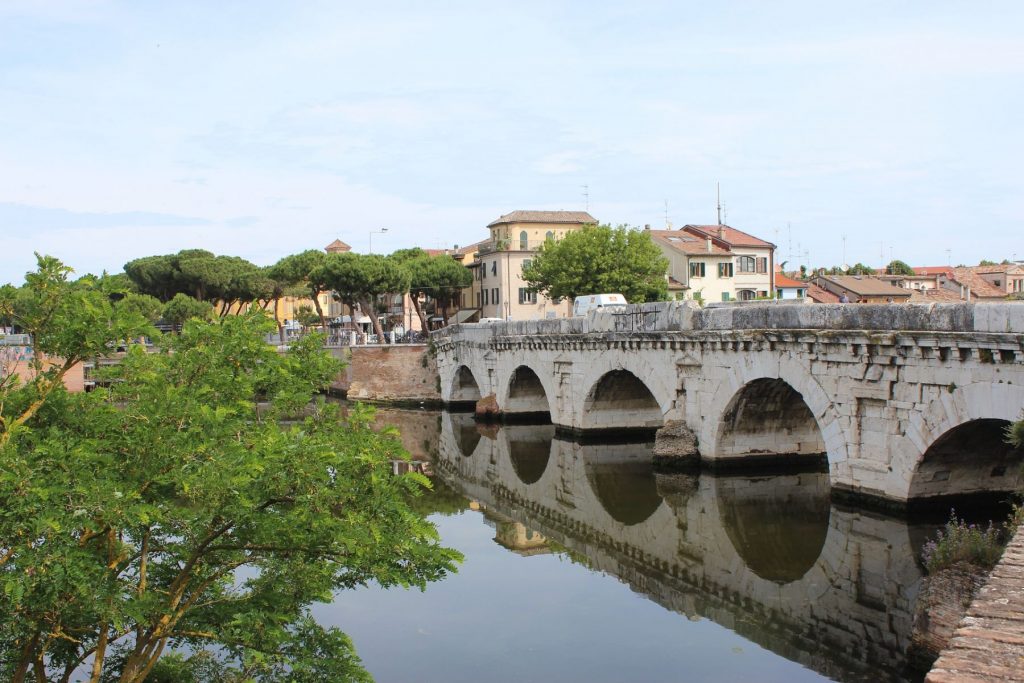 Rimini still holds some major Roman treasures that are must-sees when you visit- even if you’re on a beach holiday! 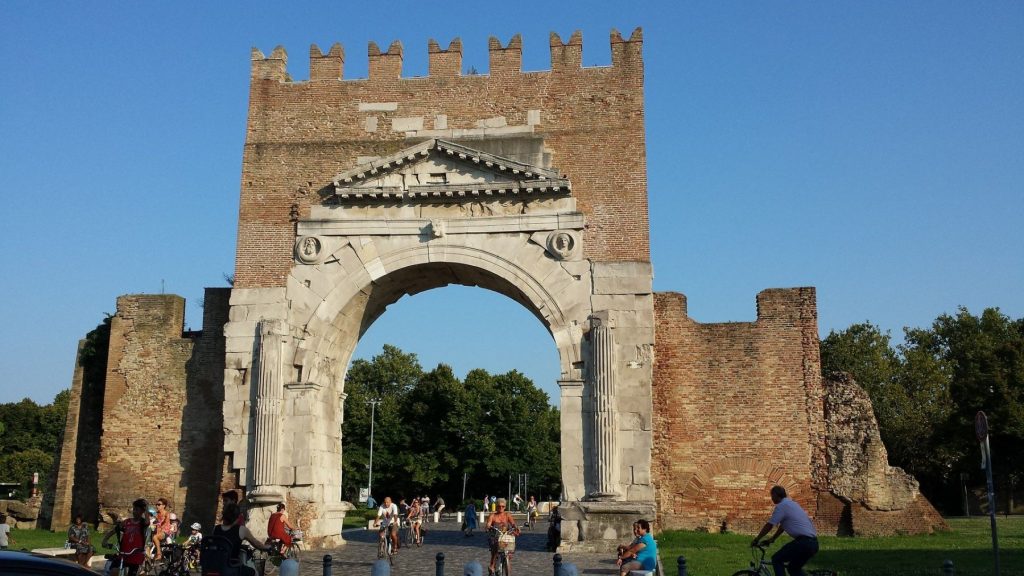 Other Sights in the Historic Center

Rimini’s Duomo, il Tempio Malatestiano, is an unusual, unfinished cathedral that takes its name from Malatesta, ruler of Rimini in the 15th century. Inside you’ll find frescoes by Piero della Francesca and a crucifix attributed to Giotto.

Piazza Cavour is considered the very heart of Rimini and is where you’ll find the majority of the shops, restaurants, and cafes. The famous fountain, Fontana della Pigna, sits at the very center and has been a central meeting point for locals for hundreds of years. The magnificent Palazzo dell’Arengo and Palazzo della Podestà are also here as well as the ancient Pescheria Vecchia (fish market) and the neo-classical Teatro Comunale.

As if all this weren’t enough, Rimini also has its own castle- Castel Sismondo. Located just steps away from Piazza Cavour, the majestic Sismond Castle even had Brunelleschi’s input during its construction in 1438. Today, what we see is only a portion of the original although it underwent a massive restoration project in 2018.

Make sure to stroll through the ancient fishing village neighborhood known as Borgo San Giuliano with its brightly-colored houses and beautiful murals.

Considered one of the greatest directors of all time, Federico Fellini was born in Rimini in 1920. His iconic films such as Amarcord, La Dolce Vita, 8 1/2, La Strada, Notti di Cabiria forever changed the world of cinema. In 2020, the city celebrated 100 Years of Fellini, and visitors today can take either guided tours or self-guided tours visiting all of the famous Fellini locations throughout the city. A museum entirely dedicated to cinema and Fellini himself was scheduled to be housed in the famous Fulgor Cinema but has not yet been completed.

There are an astonishing 250 bathing establishments along the shores of Rimini. Many hotels also include the use of an umbrella and lounge chairs during your stay. Within the past two years, Rimini has also declared itself a cigarette smoke-free and plastic-free beach! There is loads of entertainment for all ages from beach volleyball, to group dancing and exercising, to entertainment for the little ones. Many sections are also dog-friendly in case you are traveling with your pet. 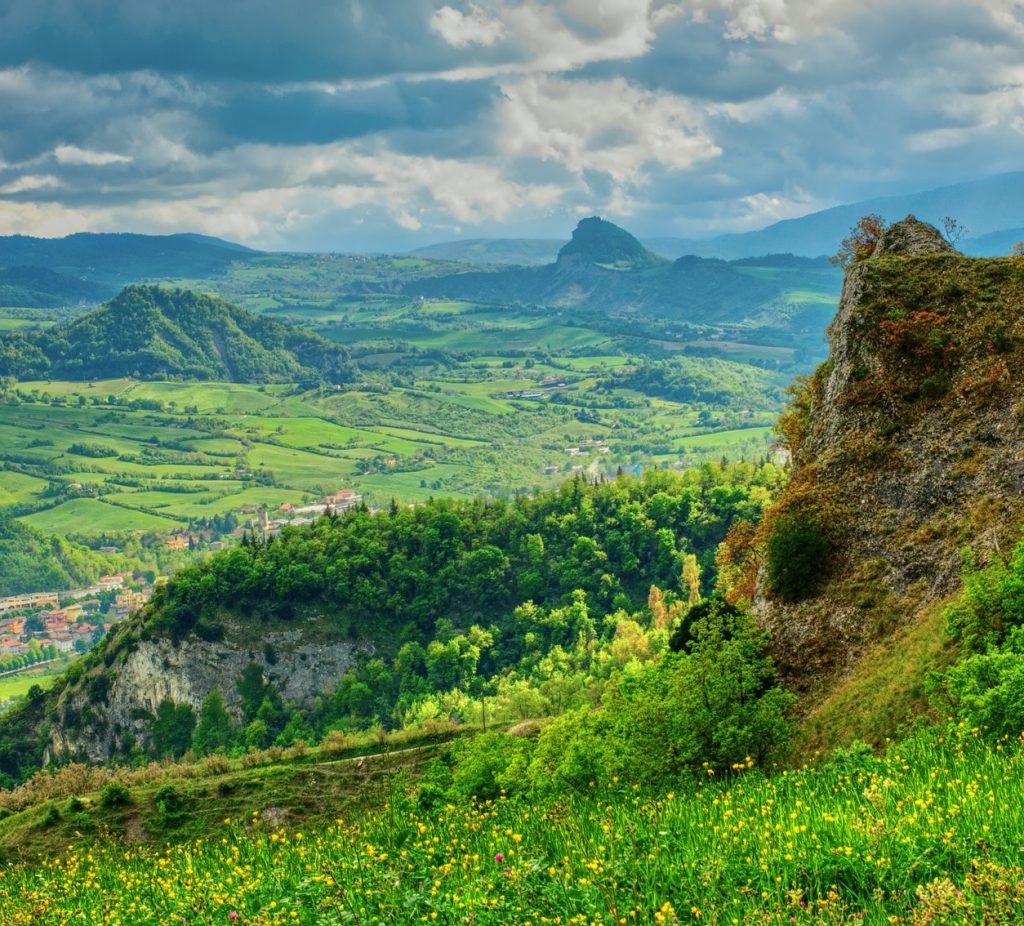 What’s more, when you visit Rimini you are just a short drive away from the famous hilltop villages of Santarcangelo, San Leo, and the Republic of San Marino!