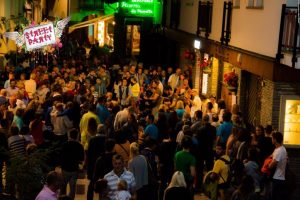 July 27th, in Courmayeur, is a great day to celebrate the Patron Saint Pantaleon.
From the morning, the town is decorated for the celebration: tradition joins the party for a day dedicated to everyone, with games for children and adults and music until late night.

Here is the program: 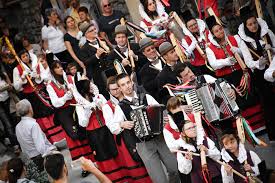 At 5 pm, it’s time for tradition with the parades of the Les Badochys de Courmayeur (a folk group of the town) and the Band of Courmayeur and La Salle.

At 6.30 pm, a function in honour of Saint Pantaleon will be celebrated at the local church.

At 7.30 pm, the typical Saint Pantaleon dinner begins, several stands along the pedestrian street, will welcome you. Starting from Viale Regionale up to
Viale Monte Bianco, you can taste delicious dishes, ranging from aperitif to desserts. For dinner, you can’t miss the Plate of San Pantaleon, which belongs to the traditions of the party.

From 7.30 pm to 1 am you’ll have a lot of fun! In fact, the pedestrian street of Courmayeur will turn into a disco under the stars! Courmayeur’s bars are organised to give you an unforgettable night with the STREET PARTY. At the adjoining bars (La Briciola, Le Dahu, American Bar, La Luge, La Bouche, The Courmayeur Club) you will find different musical animations and special drinks prepared specifically for the party. If you want to get the best out of the party, do not forget to buy the Saint Pantaleon T-shirt: in addition to be a beautiful memory, the t-shirt will allow you to drink at the bars that adhere to the Street Party!