Forbidden History: the Giants of Mont’e Prama in Cagliari and Cabras

When you think of Sardinia, crystal clear water, golden beaches, warm sun rays, waves crashing against the cliffs, and seagulls all come to mind. You would be correct because it’s all true. 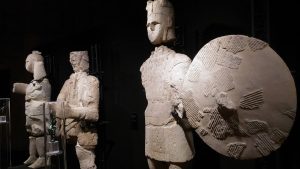 Yet, to the curious visitor who wants to dig under the surface, the island holds something more. Something which the earth has kept hidden and held in its embrace for centuries; something which one day, over 40 years ago, it decided to return to a new generation; something that, after 40 years of hard work by men and women who transformed the investigation of the past into a passion and profession, is standing in front of my eyes…and introduces itself, along with its brothers…“Here we are, we’ve rested enough; today we come back to light: we are the Giants of Mont’e Prama.”

The Giants of Mont’e Prama

A few centimeters from me, the big stone figures stand out against the wall behind them in all their magnificence- motionless, unperturbed. Arms, that once held their weapons, are still extended out straight ahead as if frozen in that endless moment when the giants fell into a forever sleep. The Giants of Mont’e Prama are sandstone statues that were found broken in many fragments in 1974, in the place that gave them their name– Mont’e Prama, in Cabras, in central-western Sardinia.

And today they have finally been given back to the world in all their beauty (although incomplete), assembled after many years of hard work. The 38 statues have been allocated to the National Archaeological Museum in Cagliari and the Civic Museum G. Marongiu in Cabras, as part of the Mont’e Prama exhibition. They have already attracted visitors from all over Europe and beyond, and bred wonder and curiosity, triggered endless questions and excitement, and challenged their audiences.

And the most fascinating aspect of these masterpieces in stone is the halo of mystery that still surrounds them and defends them against the imploring gazes of those who would like to know their real identity. That mystery which lingers above all the ancient world like a meticulous guard and which attracts us and provokes us.

Throughout all this time, various interpretations have been given on the giants’ identity. We do know that they are related to the Nuragic age (900-700 BC) and that they are among the oldest in the Mediterranean, yet a univocal explanation has not been given. The “Giants” that can be recognized have been identified as boxers, archers and warriors. Three figurative models that simply take your breath away for the accuracy and beauty of the details, the dimensions (over 2 meters high) and for the questions they provoke. Were you soldiers? Or athletes, about to perform in sacred games? Or maybe you watched over the deceased of the necropolis of Mont’e Prama entrusted to you at the dawn of time as if guarding it for all these centuries?

There is a plaque at the Giants’ feet and the multimedia console, placed in the middle of the room, allows visitors to see perfect 3D recreations of each statue on display.  As my hands play on the screen, the model presents the sculpture in all its incredible details- details that I had not immediately noticed on the stone.

The explanatory panels are skillfully arranged in each room and the gallery walls guide me throughout the exhibition showing the history of the excavations at the Mont’e Prama site. The exhibition has been arranged in a simple, yet masterful way. 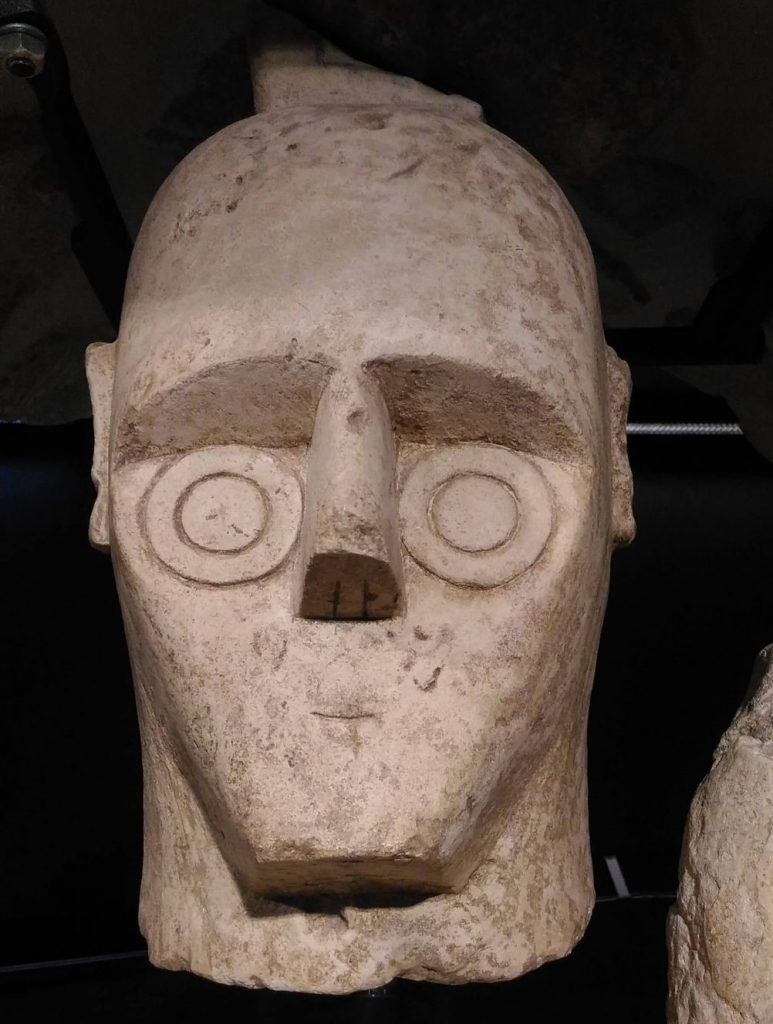 And yet something disturbs me. I know what it is; I know it might seem foolish, but it’s that something that gives me chills every time I enter a museum. I turn back and stop again in front of the Giant. It seems as if he is staring at me from up there, wary- but he doesn’t see me. I keep staring at him and there it is! That sensation, that thrill! It’s that thrill you feel when you realize how small you are in the face of history. Not insignificant, mind you. I have never thought that; on the contrary, I have always believed that even the smallest things can shape history.

But in this very moment – and maybe because I’m standing at the feet of a 2-meter high giant – I really feel small: and it isn’t an unpleasant feeling. Somehow I feel rewarded; when the earth gives you back something so amazing, you can only feel as if you were a part of something bigger- enormous, without limits. And maybe at that moment, paradoxically, you feel you are a bit less small than usual. At the cost of sounding obvious, I think of the metaphor: we are dwarfs standing on the shoulders of giants, that’s true. And an exhibition like this can only remind us of that.

It doesn’t matter if you don’t know the history of this beautiful island: its culture is the culture of the world, a source of pride not only for the people to whom it belongs but for all of us. So the culture of Sardinia welcomes from wherever you may come. In my opinion, it’s a gratifying and essential part of the Sardinian experience.

For further information, please refer to the websites of the Museums of Cagliari and Cabras:

Post Views: 3,037
S. Diana
The Italian village of Falerone: history and traditions
The Sword in the Stone: San Galgano in Tuscany