Sardinia’s Village of Baunei on the Gulf of Orosei

Italy’s magical island of Sardinia is known throughout the world for its stunning beaches, turquoise waters, and unique culture. But did you know that in addition to all this, there are also charming villages just waiting to be discovered? Today, we’re exploring Baunei in the Nuoro province of the island. Let’s go! Andiamo!

Approach Baunei With a Sense of Adventure

Less than 5 km from Sardinia’s eastern coastline, the village of Baunei clings to a limestone cliff of Monte Santo. It’s almost hard to fathom that a village so close to the sea could sit at 500 meters (1,640 ft) above sea level, yet, there it is. Legend has it that it was built in the year 1015 AD by a shepherd trying to flee from an Arab invasion.

When you come here, to the part of Sardinia known as Ogliastra, you’ll realize immediately that this will not be your average trip. You’ll recognize that this will be more of a journey for the mind, body, and soul. There isn’t a list of museums, churches, and monuments that you’ll be madly checking off your list as you might in other major Italian art cities. Approach Baunei with an open mind and a sense of adventure and it will pay you back in kind.

In the historic center, Baunei’s main square is Piazza Independenza which is where you’ll find the St. Nicholas of Bari parish church. Dedicated to the town’s patron saint, the church was erected in the 1600s and underwent reconstruction in the 20th century. You can also visit the Sa Dommu Eccia museum which will give you an insight into Baunei’s history and culture.

If you’re not an adventurous hiker, then the best way to see the surrounding area is by catching a little train/shuttle (trenino del Supramonte) which will zig-zag you up the seemingly impossible hairpin turns to reach the Supramonte di Baunei. The route includes panoramic vista points of Baunei, the Gulf of Arbatax, and the tallest peaks on the island, those of Gennargentu.

But there’s more! The route continues on to natural basalt pools known as As Piscinas. Then, you’ll press on to the entrance of Su Sterru, the spectacular 295-meter deep karst chasm that helped make the Golgo plateau famous. The little church of St. Peter is the next stop followed by the final leg of the tour which will take you to the Maschera di Pietra, a face carved onto the mountainside by erosion.

Hiking to the Many Coves

If you are truly up for an adventure, then there is no better way than hiking and this area is one of the most beautiful on the island. Routes are plentiful and suitable for various levels of expertise and ability. Although, in Italian only, this website provides route maps for more details. Many of the paths lead to the stunning coastline just a few kilometers away.

A favorite spot and landmark of this coast is Pedra Longa, a 128-meter limestone spire that contrasts with the turquoise sea. An exclusive cove called Cala di Pedra Longa is reachable on a foot trail or by boat. 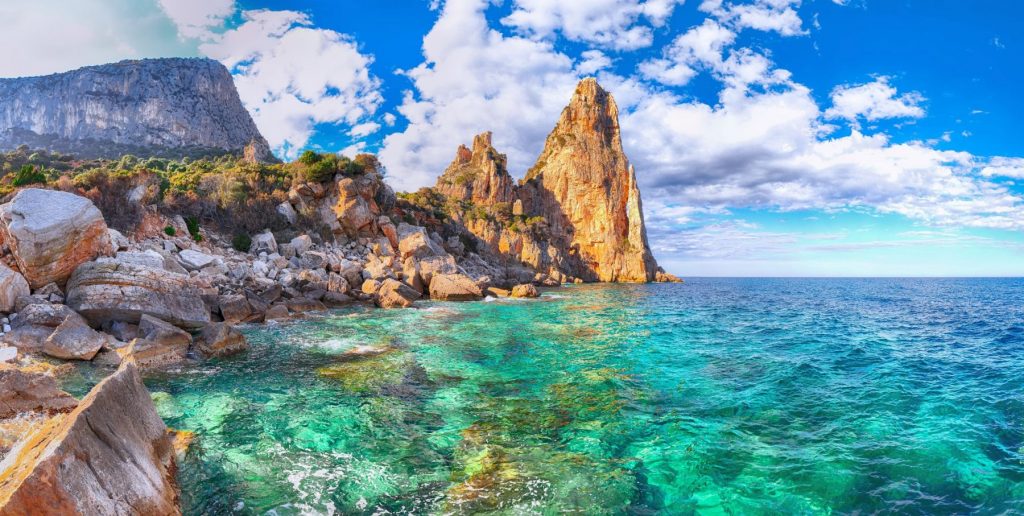 The Gulf of Orosei coastline here is comprised of 40 km of alternating white sand, pebble, and rocky beaches with iridescent water teeming with marine life. Many say that this is one of the most gorgeous stretches of coast in the entire world.

Cala Goloritzè may be the most well-known of the many all named with the word Cala (closest to the meaning of “cove” in English) including Cala Biriola, Cala Mariolu, Cala Sisine, and Cala Luna. Artifacts dating to the late Stone Age (10,000- 4,500 BC) were found in the caves of Cala Luna and have since been taken to the archeological museum in Cagliari. You can also explore the numerous natural grottoes dotted along the shore via swimming or private boat. There are numerous tours available which we highly recommend! 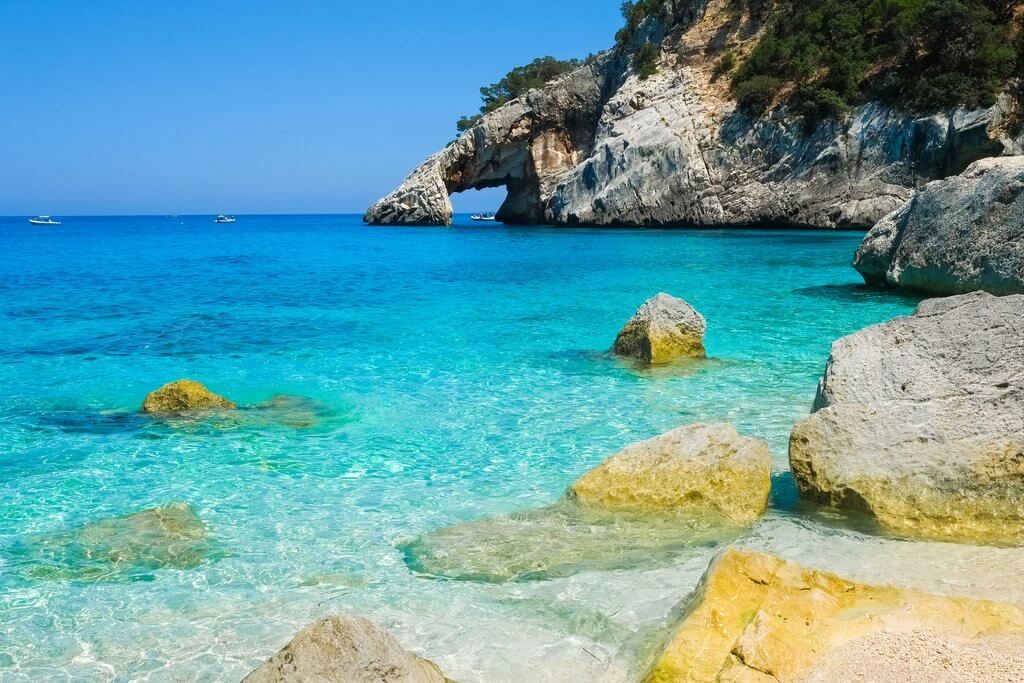 If you’re looking for a family-friendly beach with lots of services and conveniences, then you’ll want to visit Santa Maria Navarrese. It’s also a port town making it a perfect location to book a tour of the other nearby cala.

If you want to experience Baunei’s rich cultural heritage, the most important event of the year is called Sa Coua Baunesa held on June 8th and 9th. You will wonder if you’ve stepped centuries back in time as you marvel at the townspeople in traditional costumes, take in the aromas of ancient recipes wafting through the air, and listen to the bellowing sound of an accordion.

That’s when your journey will be complete and you’ll truly understand why Baunei has been chosen as one of the most beautiful villages in all of Italy.