Spoleto: One of the Most Fabulous Art Cities in Italy

In Umbria, the region lovingly referred to as the “green heart of Italy”, lies the important art city of Spoleto. It has retained traces of its Roman, Lombard, Visigoth, and Papal past evidenced in its architecture throughout the city. Let’s find out the main sights in Spoleto and a bit about the culture too.

The Umbri tribes of Spoletium were allies of Rome during the Second Punic War. Today, the Empire is still present in Spoleto throughout the historic center. The Ponte Sanguinario, or Bloody Bridge, presumedly named for the massive amounts of Christians sacrificed in the 1st century AD is still standing.

Close by is the 1st century AD Roman theater which was only uncovered in the 1950s. St. Agatha’s Convent was partially built over it in the 16th century and today, its stage is encompassed into the archaeological museum.

An arch is also still standing, dedicated to Tiberius’ sons, Drusus and Germanicus, it once led into the forum which is now Piazza del Mercato.

There is also a restored Roman house (Casa Romana) that is said to have been that of Emperor Vespasian’s mother.

Of course, any great art city would agree that its greatest monument is its duomo. The original construction dates to the 12th century with its strikingly beautiful Romanesque facade of travertine and marble along with the rose windows and Byzantine mosaic dating to 1207. Although many modifications and additions were made throughout the centuries, the floors are original as well as the frescoed apse by Filippo Lippi and his pupils. Other frescoes within the church were done by Pinturicchio. 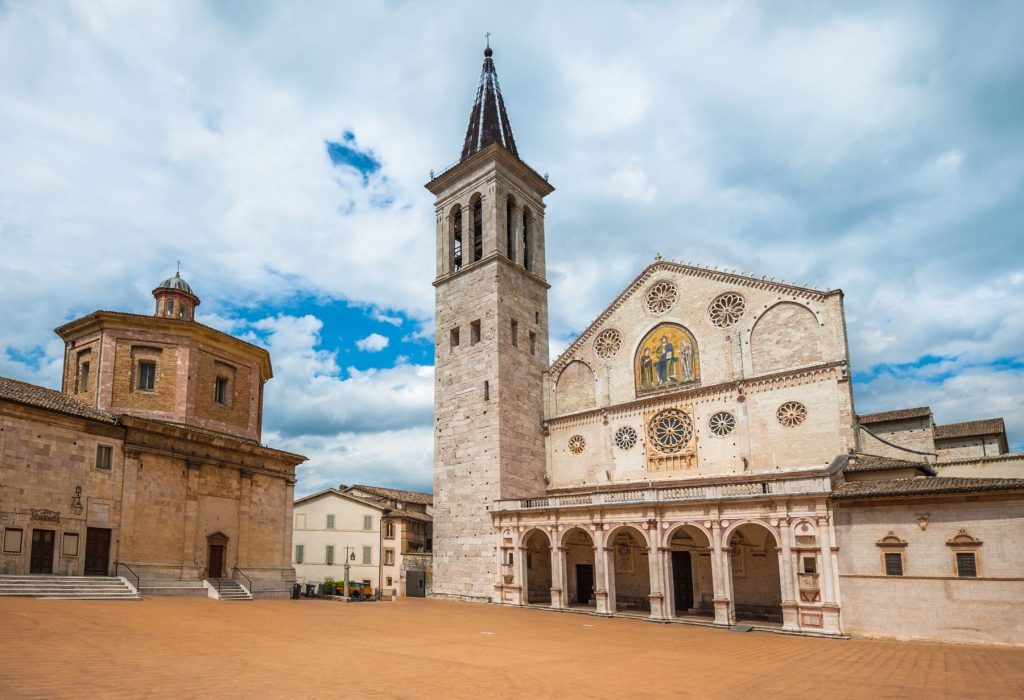 There are too many churches to cover in detail in one article, but others include San Domenico, San Gregorio Maggiore, the former church of Giovanni and Paolo, the Basilica of Sant’Eufemia, and the former church and convent of San Nicolò.

Spoleto also has astounding examples of early-Christian churches including the Basilica of San Salvatore and San Pietro extra Moenia. San Salvatore is located outside the city walls near the cemetery but it is definitely worth the slight amount of extra effort. It is one of a handful of UNESCO sites under the category of “Longobards in Italy. Places of power (568-774 A.C.)”.

San Pietro extra Moenia (meaning “outside the walls”) was originally built in the 5th century and supposedly housed the chains that bound St. Peter. The current building as we see it today dates to the 12th-13th centuries.

It’s challenging to narrow down the most important sights in Spoleto if you’re just visiting for a day, but two other places to consider visiting are the Palazzo Mauri and the Palazzo Collicola. 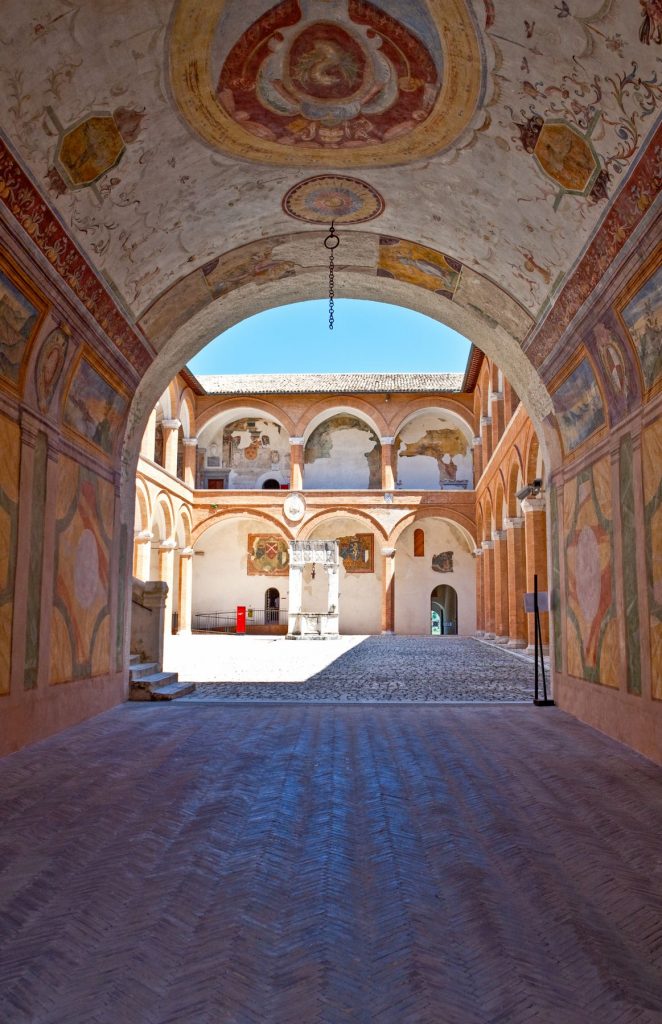 If you’re impressed by mosaics then Palazzo Mauri is a must because it holds a fabulous 6th-century mosaic dating back to the Roman-Lombard transition era. This building is also the city library with cafes and other impressive artwork. In fact, the mosaic is visible through glass in the Caffè Letterario.

Palazzo Collicola is a noble palace that houses the city’s modern art museum.

No one can possibly visit Spoleto without seeing its magnificent fortress, known as the Rocca Albornoziana. Sitting atop Sant’Elia hill, it dominates over the surrounding territory and was highly effective over the centuries in defending Spoleto. It dates to the mid- 1300s and has six perfectly intact towers. It served as a jail in the 1800s and since 2007, has housed a museum- the Museo Nazionale del Ducato di Spoleto.

You won’t be able to miss another architectural marvel that has made Spoleto famous- the Ponte delle Torri. This impressive arched bridge was originally a Roman aqueduct transformed into a bridge in the 1300s. Spanning the Tessino river, it connects the fortress and the Fortilizio dei Mulini tower.

From here, you can take the walking path called the Giro dei Condotti for breathtaking views!

Spoleto is one of a growing number of Italian cities to create a very visitor-friendly experience. Traffic is limited in the historic center and so the city has built multiple parking areas outside the center with escalators taking visitors directly into the center. There are also 2 underground people movers within the historic center making it simple to navigate all the major sites in a short amount of time.

Places that might also interest you in the Spoleto area: Gubbio, Spello, Rasiglia, Torgiano, and the Marmore Falls.