The Tarot Garden in Capalbio 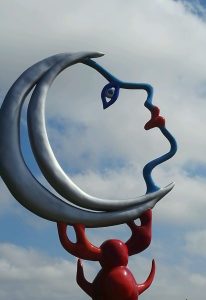 It was a sunny, breezy day in March. The sun beat down with the first rays of spring after the very long winter. The spirit of adventure that day led us to Capalbio in the province of Grosseto. The Tarot Garden is easily accessible from the A1 or Via Aurelia E 80. The parking lot is in the middle of nowhere and the day we visited, there were only a few cars and a couple of campers.

It seemed almost too easy. In fact, seen from the outside, I was afraid we would be disappointed. After we waited a few minutes for it to open and chatted with a few tourists in line (some of whom had actually taken a taxi from Rome!), I started feeling hopeful. When the gates opened it was as if we had been reading a black and white printed fairy tale, only to turn the page to a luxurious, silky, colorful illustration. There it was- right before our eyes- the unsuspecting Tarot Garden.

The creation, spirit, and innovation of the park is the merit of the artist and founder Niki de Saint Phalle. She was born in France, raised in New York and then returned to France when she was older. Inspired by Gaudi in Barcelona, ​​and working with a true team of artists, including her husband, Niki dedicated her life from 1979 to 1996 to this magical garden. 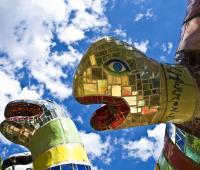 There are various sculptures and structures built of steel and cement and covered with mirrors and ceramics in a myriad of colors. It is one of those places that is difficult to describe in words or capture in a photo. As with all art, it must be felt in the first person and the interpretation left to the viewer. The park is a true Sistine Chapel for the young and old, but where you can actually run your fingers over the mosaics, run between the statues, and even yell if you please. A place where no one will shush you or tell you not to behave childishly because it is impossible to maintain seriousness in such a wonderland. 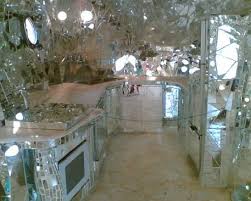 There is something visually fantastic at every turn. You’ll want to revisit the same spot an hour later and see it in a different light as the sun changes position and the rays reflect on the myriad of mosaics. Even though photos could never capture the true feeling and splendor, you’ll find yourself taking hundreds of shots and selfies. If you’re like me, you might find yourself hesitating posting your location for your friends to see because you may just want to keep them wondering where in the world you are. You may just want to keep this Alice in Wonderland all to yourself in your fantastic, child-like imaginative world.