What I am going to tell you about my dear region of Abruzzo is something that I like to whisper in a low voice and there is a reason why.

Italy, outside of the stereotypical postcards of beautiful cities and historical monuments, is a colorful, patchwork quilt of 20 various and differing regions. Every region is a specific world, with different traditions, landscapes, colors, weather, food, and even different dialects! Besides many well known, famous and sometimes overrated regions, there are lands still unknown. This is the unconventional Italy. Uncrowded, rustic, and wonderful! It has not been packaged or decorated for the tourists. It is Italy for everyday life, not for tourists. That is the reason why I keep my voice low. I want these regions to be discovered but, on the other hand, I would like to keep them away from massive tourism to preserve the authenticity and the truth of these lands. 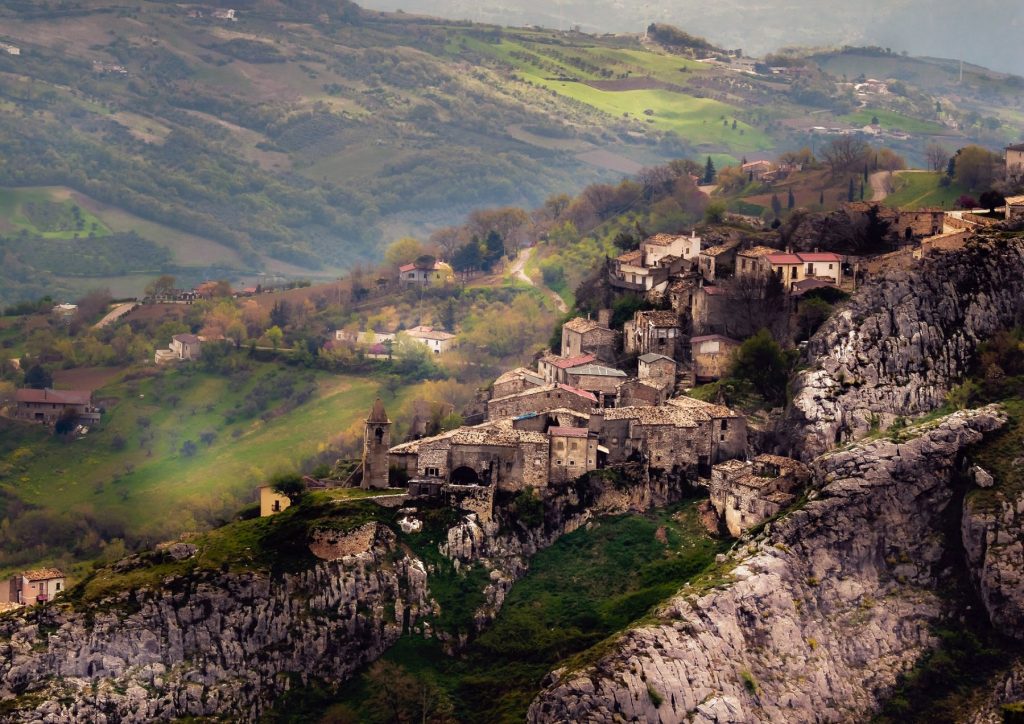 It is hard to think of a lovelier corner of Italy than the Abruzzo region. The beaches are golden, and the sea rolls out like a giant bolt of turquoise silk. There are mountains, too, which means that living here provides both skiing and beach-combing on your doorstep, depending on the season. This region is one of Italy’s secret treasures. No over-crowding or heavy industry, only castles, vineyards, and villages made of stone.

Life in the Abruzzo hasn’t changed much over the years, and exploring here is like wandering into a gentler, kinder yesterday, a time with little or no crime and neighbors who watch out for one another. Old ladies in pinafores bring their chairs outside and sit in gossiping groups, stringing onions into plaits. Instead of playing computer games, young boys are outside playing soccer.

Relatively unknown to foreign visitors, the sparsely populated Abruzzo is where central Italy merges into the languid realms of the deep south. Even though many parts of the area are only an hour’s drive from Rome, it clings onto its secret feel.

Food is important in Abruzzo, as it is everywhere in Italy. In most trattorie, everything is home-cooked and just like nonna (grandmother) used to make. In fact, sometimes, nonna still makes it. On the coast, dishes feature fish; inland, the cuisine becomes heartier, based on lamb and wild boar and amazing sweets.

Do not forget about the sagra. The Sagra is something I love about my country. In Italy, a sagra (from Latin sacer, or “holy”, because in ancient times it was mainly a religious event), is a local festival that involves food. It is often dedicated to a specific and typical local food. Although there are many sagre throughout the whole year, they are more widespread during the hot summer season. A Sagra is much more than just a festival. It is something that involves entire villages. The streets become colorful, the people live outside and fully enjoy every single moment. And throughout the night, you can hear the music and see the lights from a distance. This is the taste and feel of my summer since my childhood. 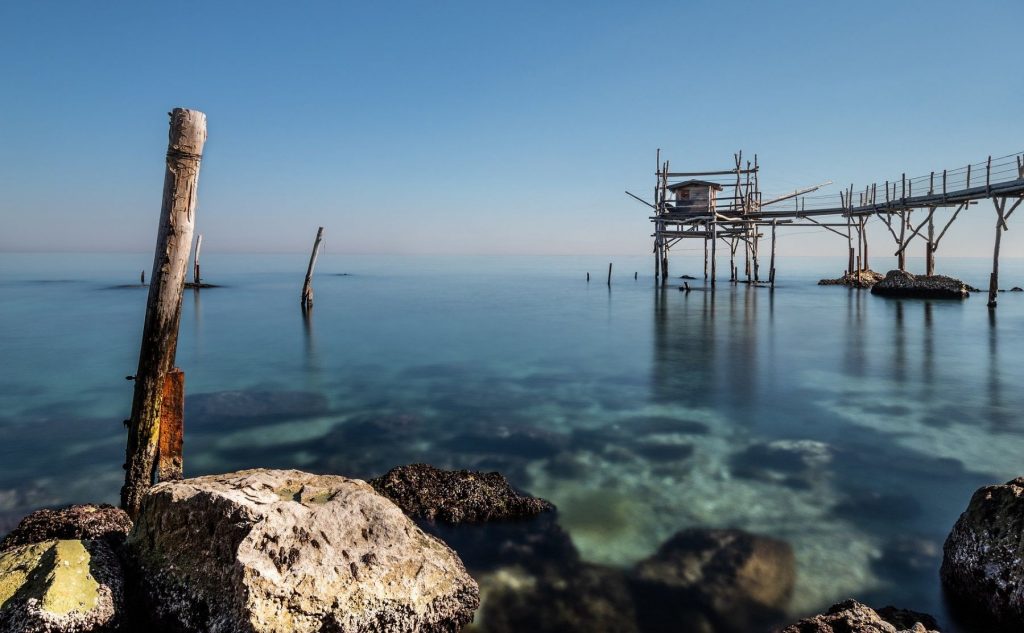 For the few foreigners who explore Italy’s last unspoiled regions, Abruzzo is the real “Green heart of Italy”. It is authentic, genuine, beautiful, and really “strong and kind” (Forte e Gentile), as its tagline says. “Abruzzo is still little known, despite the great beauty it has to offer,” says a spokesperson from the local tourist board.

The main town in the region, Pescara, has one of the best city beaches in Europe and not far away is some of the best skiing outside of the Alps. In spring, it’s possible to combine a morning on the Apennine ski slopes with an afternoon at the beach.

A visit to Abruzzo can include anything ranging from the medieval fishing village of San Vito Chietino to Punta Aderci, a coastal nature reserve. Abruzzo’s three national parks are Gran Sasso, Majella, and Monti della Laga, which boast over 100 indigenous species, including the mythical Italian wolf.

A majestic stop at Rocca Calascio is another option, a mountaintop fortress that stands proud despite damage from past earthquakes. Or there’s Roccascalegna, an 11th-century castle clinging onto a limestone bluff thrusting upwards into the sky and down to the Val di Sangro, an enchanting coastal valley by the Sangro River that’s part of “La Costa Dei Trabocchi”, famous for its unique fishing piers and pristine beaches. 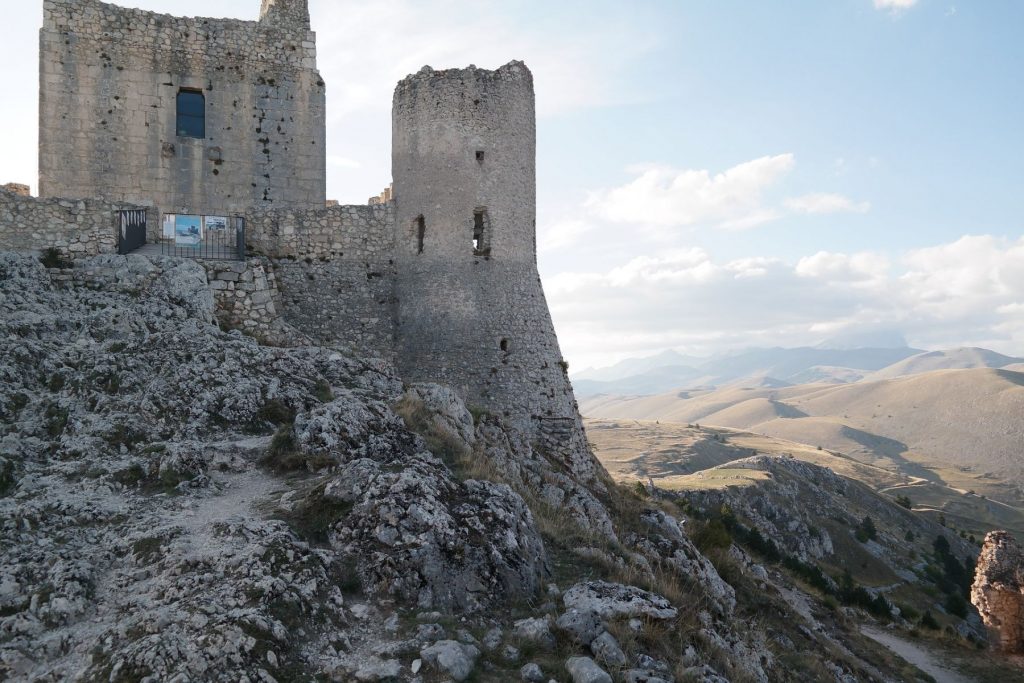 Screenwriter Gisella Orsini, meanwhile, is concentrating on the region’s little-visited Roman remains and examples of its Roman presence (back in the day, Abruzzo was a beloved holiday destination for ancient Romans). The Abruzzo she’ll focus on includes Alba Fucens, an archaeological site where remains of Roman buildings, roads, and underground passages stand proud, a 2000-year-old theatre at Teramo, and the Santa Maria de Praediis church, erected in the 10th century using materials from Roman villas and temples.

“Only now are some taking notice of the extraordinary tourism potential of this ancient land,” Nanni says. “In the past, Abruzzo’s story has been badly told, without a vision of its future.”

An extraordinary tourism potential, that must be discovered… yes, but not too quickly!