The Catacombs of Palermo

Palermo is charm, it’s art, it’s history but it’s also legend. Palermo is simple but at the same time mysterious. Like an attractive and intriguing woman, sometimes a little unnerving, who does not want to immediately reveal her cards. It is for this reason that poets, writers, and travelers fell in love with it and have written page after page about its beauty, vices, inhabitants and the marvelous traditions and cultures that color Palermo. Among these admirers, there is the great Palermo historian and writer Luigi Natoli.

Its greatness lies in detaching the literary character from the pages of the novel in a veil of mystery and preventing the reader from distinguishing the truth from the fantasty, legend from the news, the voices of people from the truth. 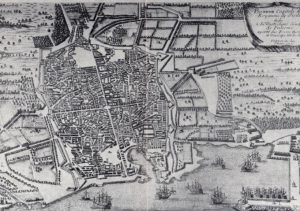 A great scholar of Sicilian literature and history, Natoli succeeds in uniting, kneading and amalgamating actual events with those invented in an excellent manner. To make everything even more realistic, the places in the novel are described so meticulously that one feels like they are holding a map in their hand rather than a novel.

Retracing these places and trying to discern reality from fiction is the basic idea of ​​the tour “I Beati Paoli and the Mystery of the Sect” organized by the association Tacus – Art. The proceeds from the tour are donated and used for wheelchairs and the social and cultural integration of people with special needs.

The tour starts from the famous catacombs of Porta d’Ossuna, located outside the walls of the old Palermo. The cost is € 8.50 for non-members and includes a guided tour by an archaeologist from the cooperative society Archeologia Arche Officina. They are well prepared and guide you through the true story of the catacombs dating back to the early Christian period. Rediscovered in 1739, they continued to be used as an underground cemetery, later as a refuge during the Second World War. Perhaps, if only in the fervid imagination of Natoli, they were also a passage for the Beati Paoli to go unnoticed through the city. Later, the catacombs lost their function as the home of the deceased only to become a dangerous place, frequented by gangs and, therefore, not recommended.

From here the tour moves to the surface where an anthropology student, armed with a microphone, leads the group on a walk through the streets of the Capo market. Able to retrace, in part, the places described and quoted by the author. You can see the palace of the Duca della Motta, the famous street of the carters leading to the seat of the sect which is marked with a plaque Antica Sede dei Beati Paoli.

In the various stages of the tour it is interesting to see with your own eyes how the stories of fantastic characters and unreal events are inserted into the physical and real places. Linked to legends and folk tales that encompass a halo of mystery where it becomes unclear where reality ends and the legend begins. Even skeptics decided give the author the benefit of the doubt on the actual authenticity of the facts told.

Natoli is so good at describing the places, to insert them perfectly into the historical context of reference, to make everything perfectly credible. To be honest, I had to convince myself!

It is a tour that must be done, and not just for those who have already read the book. For those who have, it is exciting to see that the places they imagined in the novel really exist. Those who have not read it yet, the potential readers, will be inspired to read the story after the tour. In any case, everyone has the opportunity to experience an enigmatic Palermo, to visit areas not frequented by tourists but very characteristic. The twisted alleys of the market and unexpectedly appearing squares are all made more enchanting in the light of the evening, when the gloomy lights of the street lamps make things more reassuring and those in the shadows more mysterious and disturbing, as if there was something hidden around every corner and secrets to discover step by step in an unusually quiet city.

For more information on the next tour you can consult the following link and like the page to stay updated on similar events organized by the association: