The picturesque and engaging Molise Carnival

The Devil of Tufara is a zoomorphic mask that comes to life on the last day of Carnival in the narrow streets of this small town. He charges, jumps and dances through the streets with his unbridled acrobatics. Passed down through the centuries, he has become symbolic and attracts people from all over the world.

He wears seven goat skins which, according to pre-Christian pagan rituals, was the animal in which the divinity used to show itself. He also wields a trident, has a diabolic face, wide eyes, gritted teeth and pointed ears.

Formerly, the mask represented the passion and death of Dionysus, the god of the grape harvest and vegetation, whose feasts were celebrated in almost all rural areas. Dionysus, like what he represented, died and was renewed perpetually. 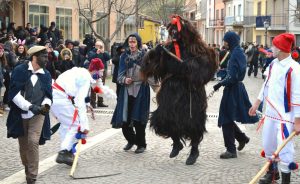 Some tie this mask to the meaning of the propitiatory dance which our ancestors performed when they sensed the end of winter and the first signs of the awakening of spring; others to that of a liberating dance to shake off the labors of life; still others to the representation of passion and the death of Dionysus, whose festivals were celebrated in almost all rural areas.

Every year the “Devil” participates in gatherings throughout Italy such as the one for the Mamuthones in Sardinia. 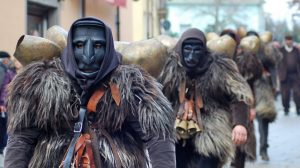 Other characters revolve around the central figure of the Devil: Death, with its white face and scythe; the elves, all dressed in black, which hold the Devil in chains.

This troupe shakes bells and performs acrobatic dances with somersaults and cartwheels through the village of Tufara. When the procession reaches the castle, a mock trial takes place with the jury and the “Father” and the “Mother” of Carnival. Despite all the attempts of the Mother, including the corruption of a member of the Jury, the “son” is sentenced to death. A puppet is killed and thrown into the arms of the Devil who stabs him with his trident. He dies, but the Mother immediately has another baby ready, the next Carnival, which gives hope for the coming year.

The acrobatics of the Devil