The Duomo of Siena: The Reopening of the Floors

As the saying goes, “When opportunity knocks…” and once again this summer, visitors will have the extraordinary opportunity to see the mosaic floors of the Duomo in Siena. If you’re thinking this isn’t a big deal, think again. Giorgio Vasari himself called them “the most beautiful, largest, and magnificent ever made.” 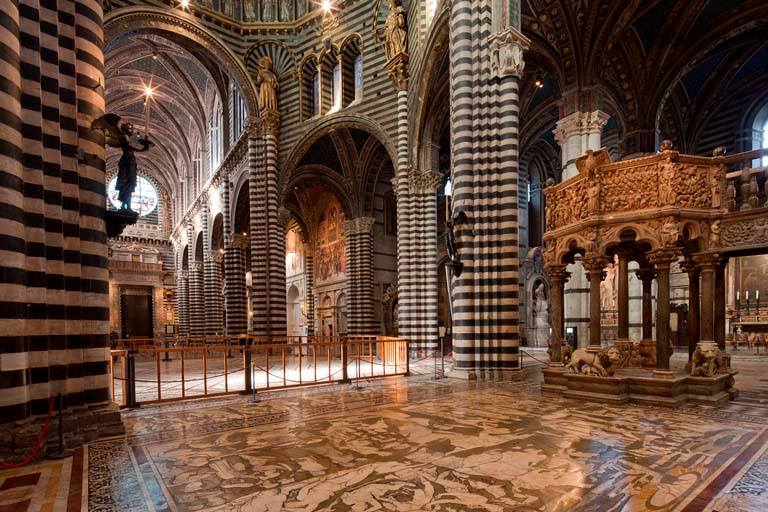 Once you’ve seen them with your own eyes, you’ll surely agree with him. A highly complex process of mosaic inlay and a technique known as graffito was used on the Duomo over a time period of five centuries. The graffito process involved chiseling or etching the designs into the marble slabs and then filling them with black stucco which was then completed by placing the colored marble inlay. There are 56 unique and extremely detailed panels completed by over 40 artists. Amazingly, they were all from Siena except for one: Bernardino di Betto aka Pinturicchio. 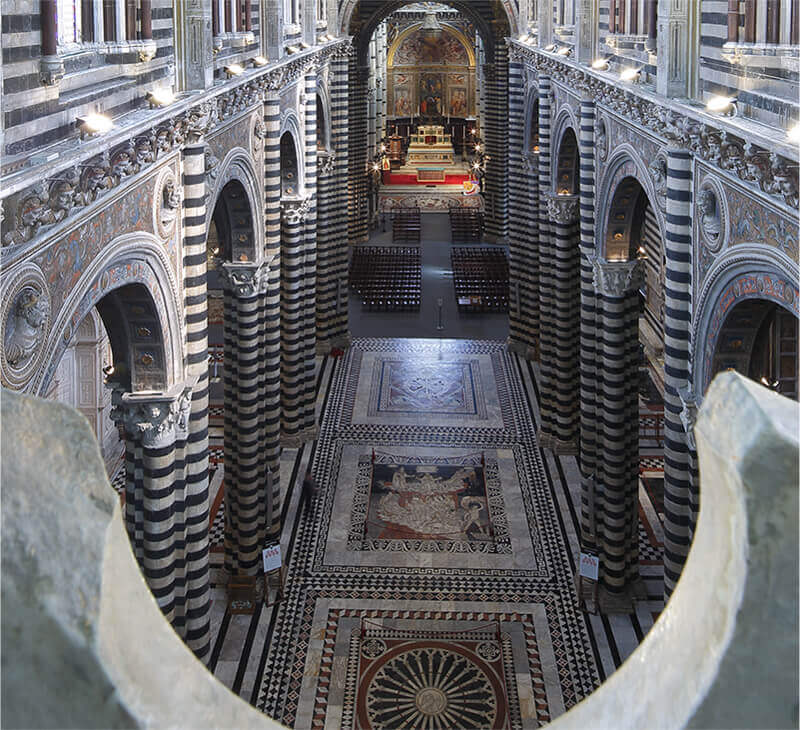 The entire cathedral is a marvel of what man can accomplish. This is a massive complex in which you could easily spend the entire day. It is comprised of the Cathedral, the Piccolomini Library, the Gate of Heaven, the Baptistry, the Crypt, the Museo dell’Opera, the Panorama from the Unfinished Façade, the Oratory of St. Bernardino and the Costone Gardens. Here is a very concise recap of each.

The Cathedral of Santa Maria Assunta or the Duomo, is considered one of the greatest Gothic and Romanesque masterpieces of all time. Greats such as Nicola Pisano, Donatello, Michelangelo and Bernini sculpted the statues that we see today. The frescoes, stained glass, and the choir are some of the most impressive in the world.

Cardinal Piccolomini commissioned the construction of the library in 1492 next to the cathedral in order to store his uncle’s (Pope Pius II) amazing collection of manuscripts and books. Pinturicchio completed the frescoes and pay close attention to the Canonization of St. Catherine of Siena scene because one of the male figures is supposedly Raphael himself who is said to have painted the frescoes with Pinturicchio. 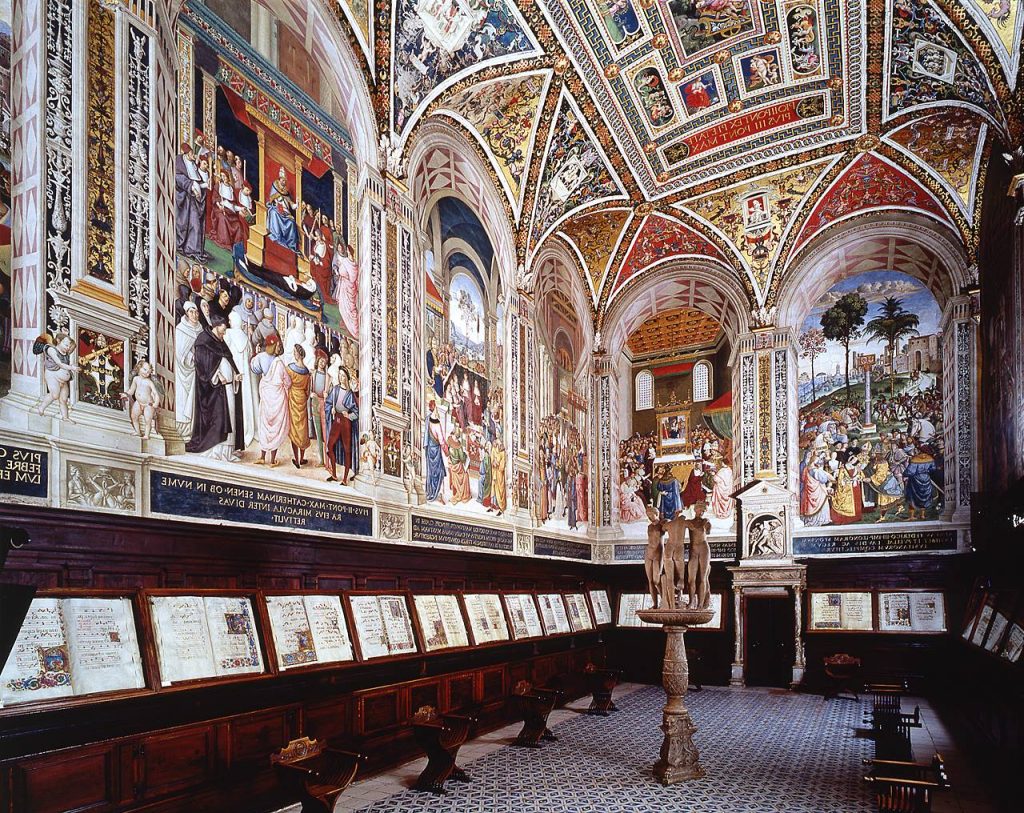 The Gate of Heaven

Many of the great cathedrals today have moved their most-prized pieces into a museum and Siena is no exception. Three floors and numerous rooms will give visitors the chance to see some of the greatest masterpieces ever created up close and personal and best of all, they will be preserved for all time.

The area known as the Crypt is a must-see because it was only discovered in 1999! After being hidden for centuries, crews uncovered it when they were working on an expansion project. Can you imagine their surprise when they found a cycle of frescoes from the 13th century?

Like the Baptistry of the Duomo in Florence, Siena’s is a masterpiece of Early Renaissance art. Here too greats such as Lorenzo di Pietro, Jacopo della Quercia, Ghiberti, and Donatello all left their indelible mark. The Baptismal font is the absolute focal point.

Last but not least, make sure to save time for the Oratory of San Bernardino which houses an extensive collection of Sienese paintings from the 13th century on. 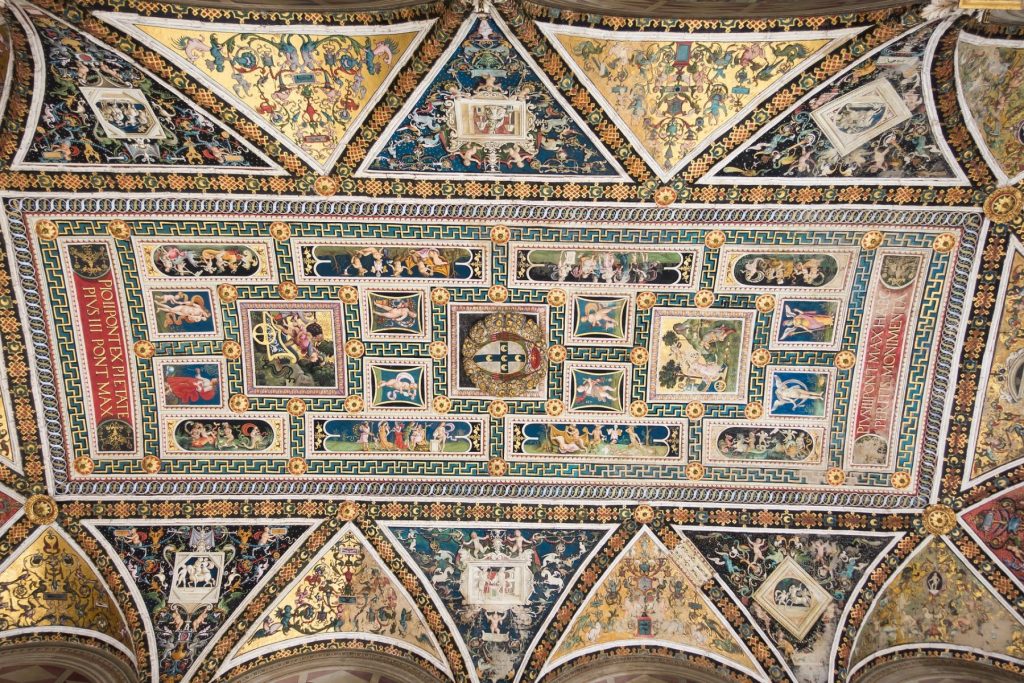 The reopening schedule is a little bit tricky so you will want to consult the official website and purchase tickets in advance before your visit. From June 26 through July 31 and again from August 18 through October 18, 2022, the duomo floors will once again be uncovered for the public to view.

Post Views: 941
Redattore
Castellabate on the Cilento Coast
The Lame Rosse Canyon and Hiking Trail in the Marches Region