The Queen of Tuscany’s Apuan Alps

To better understand any place it is important to consider its origin, its history. Tens of millions of years ago where the current Apuan Alps dominate, there was a sea. The thrust of the continental masses in a continuous, very slow movement, caused horizontal layers in the seabed towards the surface, causing huge folds. The emerged rocks were later crushed by the folds and the meteoric action of the waters, the frost and the insolation by slowly sculpting an imposing mountain range. 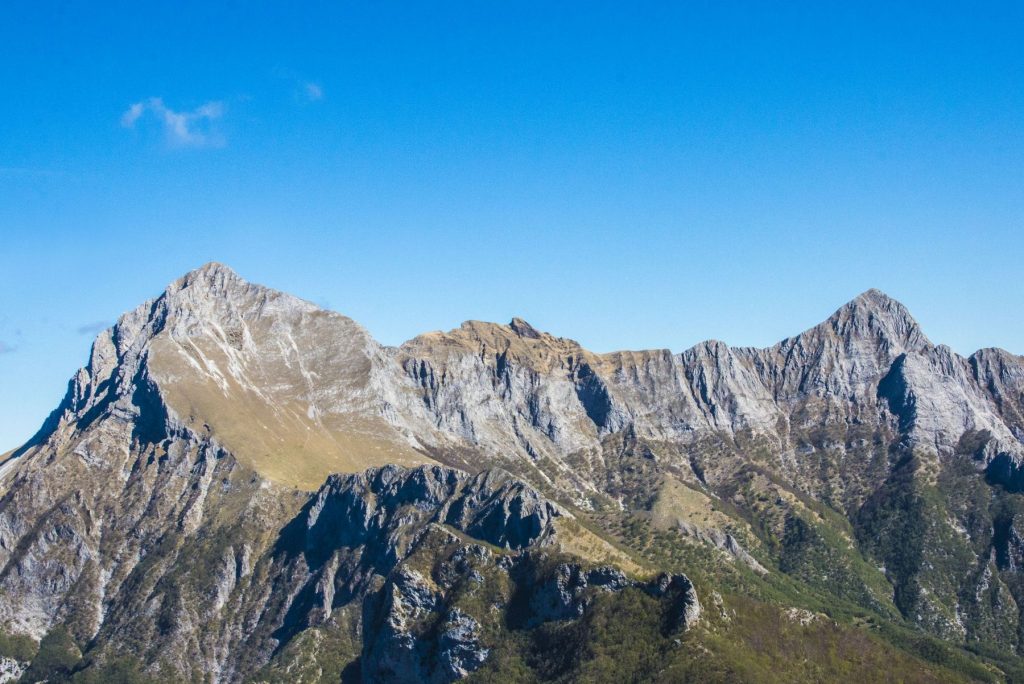 The Apuan Alps are the “roof of Tuscany” formed by a massive mountain range that is about 55 km long and 23 km wide. From the Piana di Lucca going up the Serchio river to the Garfagnana, Mediavalle and Lunigiana, finally reaching Versilia, Massa and Carrara. The most imposing peak which is located almost in the center of this mountain range is without a doubt the Pania della Croce: the queen of the Apuan Alps.

It is not the highest peak, but it is the most imposing one. With its 1859 m. it enjoys a 360 ° panorama from which you can observe the Garfagnana and the Tyrrhenian coast. On clear days, the view ranges from Monviso to Corsica to the Island of Elba and with good binoculars you can even see Giotto’s bell tower in Florence.
It represents the highest peak of the Panie group: a remarkable mountain massif visible from almost all of Tuscany, especially the north-western part (from Florence to the Island of Elba). 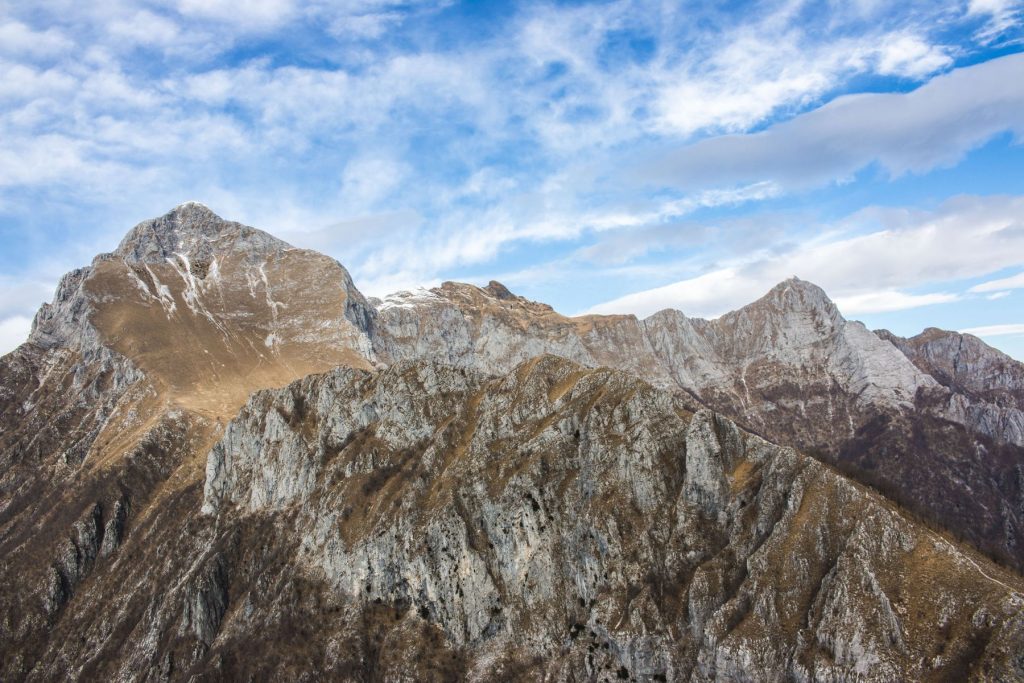 One of the most popular ways to reach the top is the CAI path n. 7 which starts from Rifugio Piglionico, above Molazzana a fraction of Gallicano (LU). Taking the path you enter a beech forest and, skirting the side of the Pania Secca, you’ll first proceed on a flat slope and then climb along a valley and then up to a maximum altitude of 1677 m also called “Puntone di Mezzo al Prato “.

Once you reach Rifugio. Rossi, you’ll continue the climb and in a few minutes, reach the Focetta del Puntone, located in the center of the Panie massif. This is where the CAI paths 7, 139 and 126 intersect. If you take the 126, it will take you into the “Valley of Hell”, a rocky path that leads with a steep climb to the Callare della Pania (1750 m.). On the left side of the Valle dell’Inferno, a hole opens, called “Snow hole”, where due to scarce sun exposure frozen snow remains practically year-round.

Once you’ve reached Callare, take the left path to the summit which will take you to the top of the Pania della Croce (1859 m.). The entire trail departing from Piglionico takes about 3 hours. 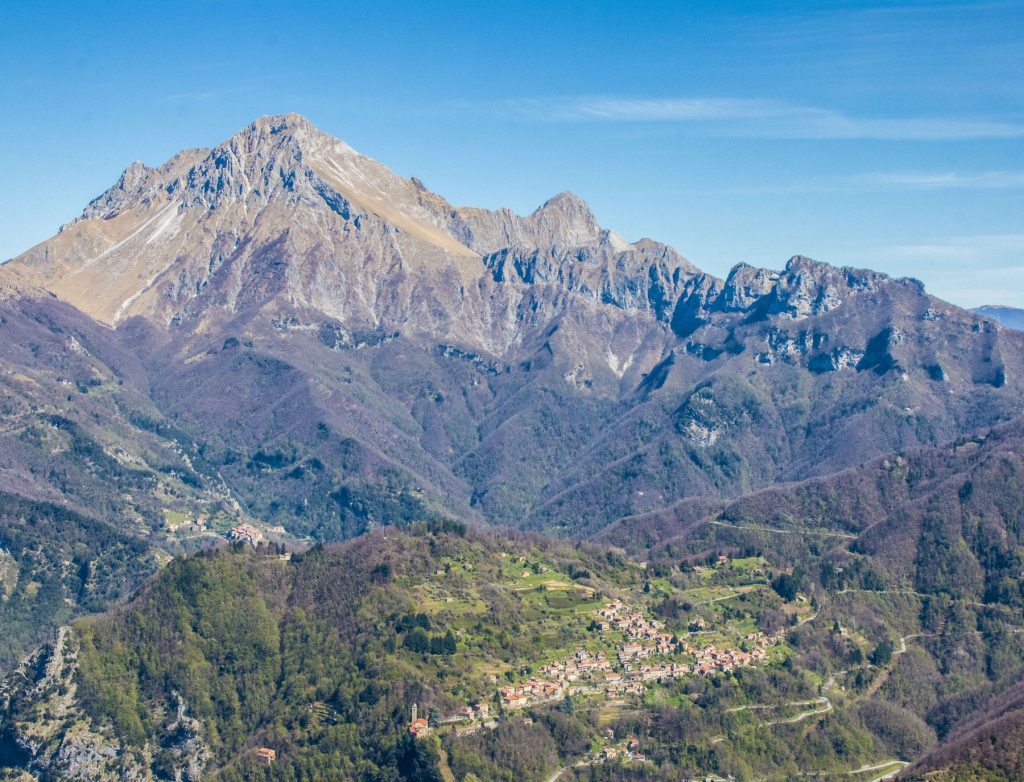 In addition, the Pania della Croce is also part of mountain mythology. It is said that many years ago, the Pania della Croce was not connected to the Pania Secca and between the two peaks there were vast meadows where shepherds led their flocks to graze every summer. Every day a shepherdess went there looking at the horizon, waiting for her beloved who never returned from the sea.

A young shepherd fell in love with her and tried to understand the reason for her sadness, inviting her to confide in him. The shepherdess told the story of her unfortunate love and explained that she could not return the shepherd’s affection. The young shepherd decided to go up to the summit of the Pania della Croce and asking God to make the girl forget her love. It was revealed to him that the only way would be to prevent the shepherdess from seeing the sea.

However, this would have required an enormous sacrifice: the young man let himself be guided by the hands of God by lying on the ground and letting his face be transformed into that of a stone giant who would have united the two Panias, thus hiding the sea view.
For the love of the girl, the young shepherd accepted and, from that day, his face was imprinted in the mountains and was remembered by everyone as “the dead man” (or “L’Omo Morto“).

Article and photos by M. Gaddini