Pennapiedimonte, a mountain village in Abruzzo, occupies the eastern slope of the Majella National Park. On its summit lies the panoramic balcony called Balzolo from which numerous suggestive trails branch off. Some of which are complicated, ideal for those accustomed to mountain terrain, others less difficult and suitable for all, but no less enchanting. 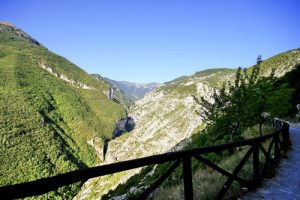 So get your trekking shoes and backpacks ready and prepare to climb a short path on a mighty rock that resembles a woman who seems to be carrying something in her arms. Legends attribute it to the Goddess Maja who lost her son Mercury in this area. Going further on, you’ll pass a short tunnel to continue along the numerous rock faces on one side, and on the other, the open passage to the beautiful canyons of the Valle dell’Avello.

The dry, stony path below your feet contrasts with the lush Mediterranean vegetation that grows around it. With the sun to keep you company, it’s a very pleasant, mostly open route. There are some caves scattered along the path that have been used for centuries by shepherds to shelter their flocks. The relaxing landscape and the rushing sound of water flowing and crashing against the rocks will calm your mind.

If you get weighed down with fatigue, just remember that just 5 km away lies the village of Guardiagrele and its traditional sweets await you as your reward. The dessert resembles the three highest mountain peaks of the Apennine range: Gran Sasso, Majella and Sirente-Velino. 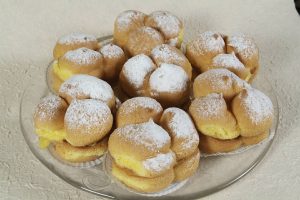 Guardiagrele merits a visit not just for its sweets but also for its artisan traditions. It’s especially known for its metal craftsmanship such as wrought iron and copper. Stroll through its streets full of history and reflect on your day and how much you broadened your horizons by taking time out from the monotony of the daily routine.