If you are ready to get out of town and explore some of Italy’s hidden gems, this article is for you. Today, we’re going to Canale di Tenno in the northern Trentino region. It is officially one of the “Most Beautiful Villages in Italy” and after reading about it, we think you’ll understand why. Let’s go! Andiamo!

Canale di Tenno, often simply called “Canale”, is a delightful medieval hamlet just a few kilometers north of Lake Garda (shared by the Trentino, Veneto, and Lombardy regions). There are fewer than 50 permanent residents in the village’s historic center. 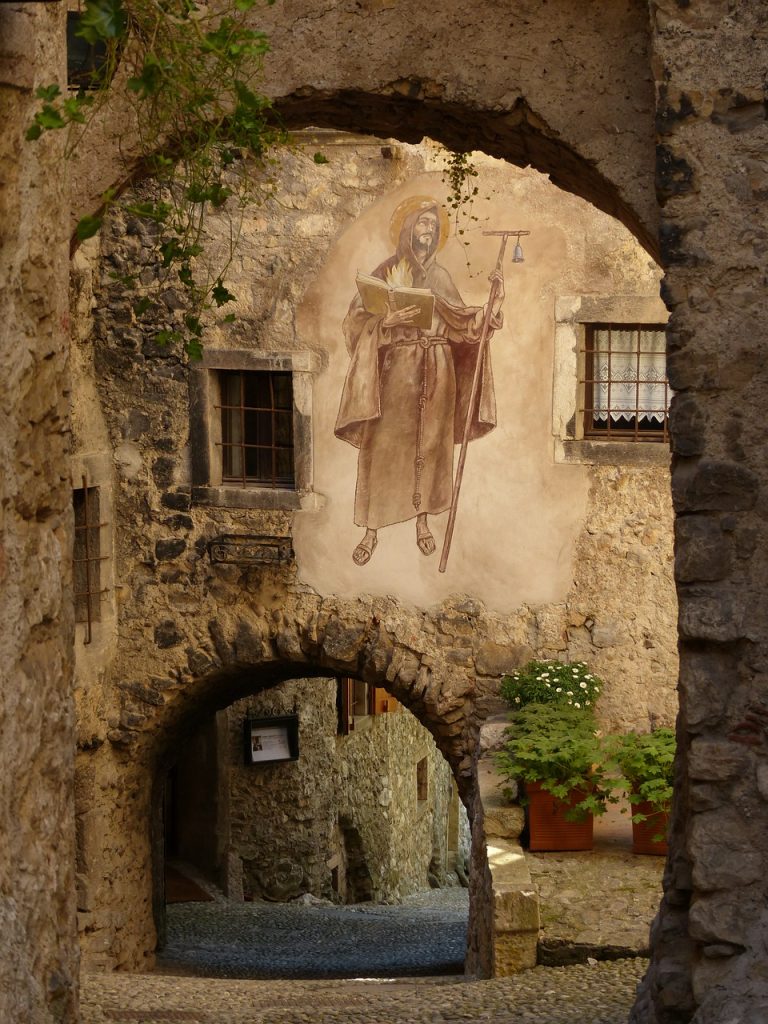 Canale is first mentioned in the history books in the late 700s but the existing village as seen today dates to the 12th century. The magnificent castle (actually located in Tenno) was erected in the 12th century and has seen the passing of many ruling families and invaders. Its central tower finally crumbled in the early 1920s but the elegant merlons and many other features remain. It is privately owned and therefore, not open to the public, but it is still quite a sight to behold if only from the exterior.

A Place for Artists

As you wander around the characteristic historic center with its dark stone buildings, cobblestone paths, and numerous arches, you’ll notice the artistic touches that embellish many of the walls. Artists have been coming here since World War II and can even stay at the “House of the Artists” named after the painter Giacomo Vittone. Every nook and cranny of the little village will have you spellbound from its panoramic views of the lush surrounding hills to its geranium-adorned window boxes. 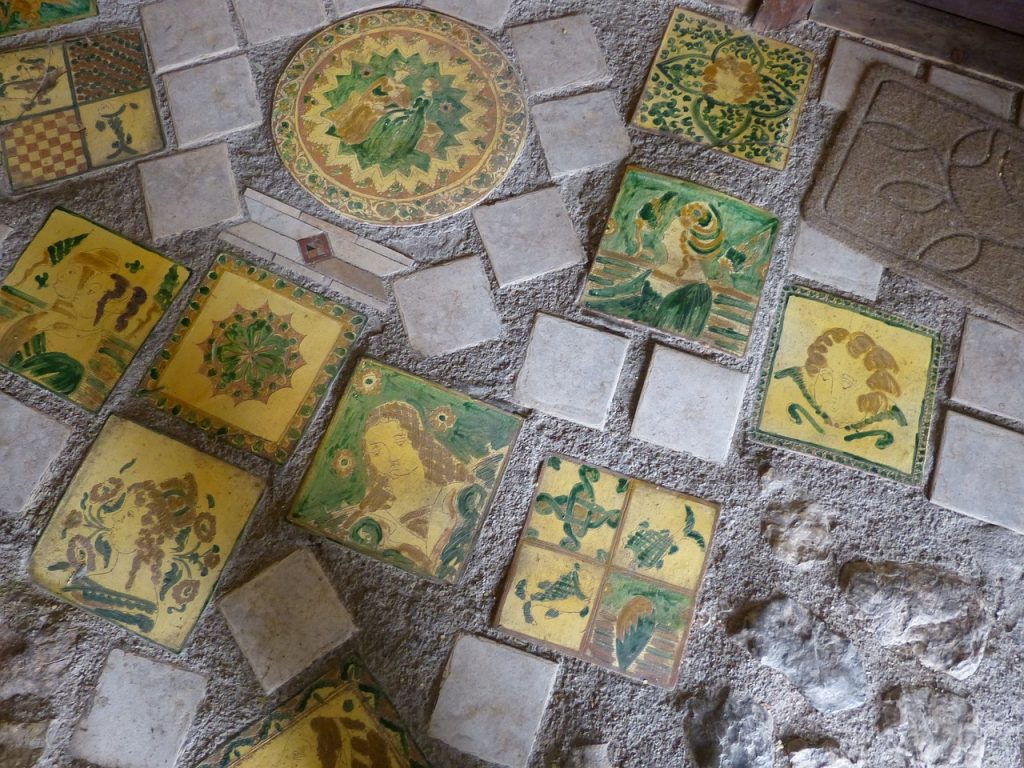 You can also visit the Museo degli Attrezzi agricoli, or the Museum of Agricultural Equipment, which provides a fascinating look into Canale’s past by way of its farming and herding methods that have been passed down through the centuries.

There are numerous hiking and mountain biking routes near and around Canale which will take you to the San Martino archaeological area (excavations from Prehistoric times) and also to natural wonders. One of these is the Varone Falls Park and Grotto which is a spectacular 87-meter high waterfall open year-round. The Garda Trentino website is a great resource for specific detailed routes.

Another must-see is the stunning Lake Tenno, called one of the most beautiful in all of Trentino. Via carbon dating methods, scientists were able to date the lake’s formation to 1,100 AD. It is one of the purest in all of Italy because there are only a handful of residences and no industry in the immediate area. If you arrive by car, you can park nearby and will then have to reach the lake by a stone walkway. In the summertime, a little island appears as the water levels lower and there are even lifeguards on duty for the enthusiastic sunbathers and swimmers. 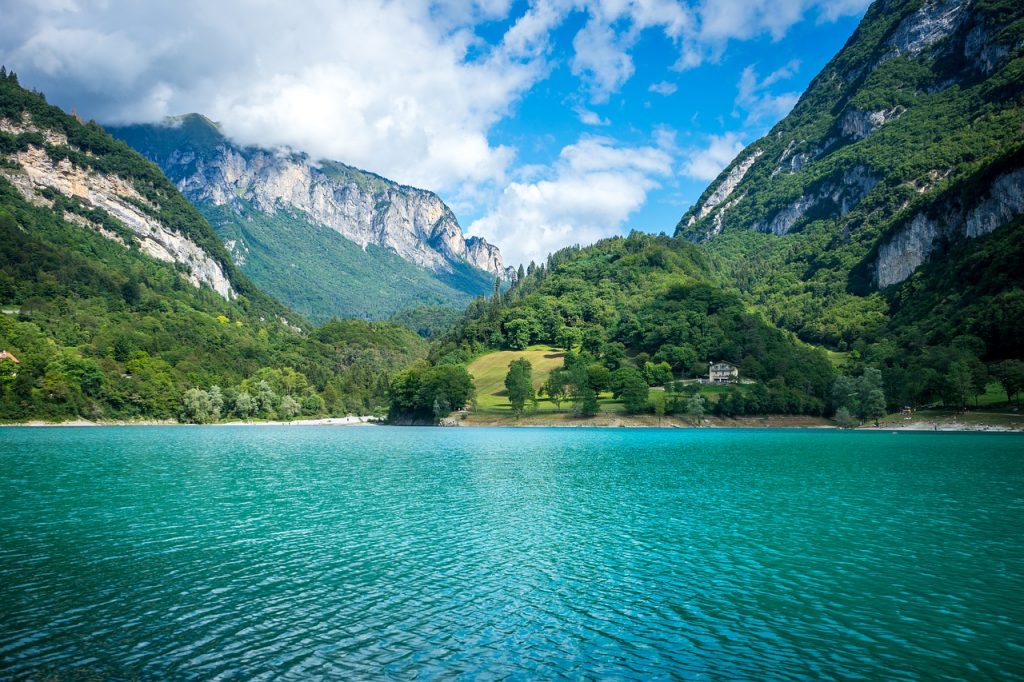 Summertime events include the medieval festival, Rustico Medioevo, when the village of Canale reenacts in history with festivities, music, dancing, and overall merry-making. In the winter, you can get into the spirit with the traditional Christmas market.

The area is full of traditional, family-owned and operated trattorie and osterie where you can taste all the authentic, local flavors.

There is no train station in Tenno. Connections are in Rovereto (35 km away) where you can catch the Riva del Garda bus line and then switch lines for Tenno.

Post Views: 156
Redattore
Aquileia: “The Second Rome”
Sardinia’s Village of Baunei on the Gulf of Orosei