The City of Bolzano in Italy’s Dolomites

The Italian city of Bolzano is a fantastic destination at any time of the year but is especially magical during the winter months. It is no surprise it was voted the city with the highest quality of life in Italy in 2014. It lies at the gateway to the Dolomites which are part of the Southern Limestone Alps in northeastern Italy.

We’ll start the itinerary with the old- the very old! Bolzano is home to “Otzi the Ice Man” the 5,300-year-old man who was preserved in the ice and found by hikers in 1991. The South Tyrol Museum of Archaeology, an extremely well-done, premier museum, opened in Bolzano in 1998 to house the Ice Man and his interesting story. Full of genuine artifacts that reconstruct Otzi’s interesting life as well as the Copper Age, it is a must-visit for visitors of all ages.

One of the signature sights of Bolzano is its Cathedral. Its green and yellow roof and spire distinguish it from others. Dating back to the early-Christian period, it shows evidence of both Gothic and Romanesque architecture. It is a true walk through history as you admire the statue of Mary on the altar (the 1200s), frescoes by Pacher (1475), the sandstone spire added in the early 1500s, and the Baroque Chapel of the Graces added in 1745. You can visit the Cathedral from 10 am to 5 pm Monday through Saturday as well as masses on Sunday.

Two other important churches to see are the Dominican Church and the Franciscan Church and Convent. The Dominicans settled in the area in the late 1200s and the highlight of their church is by far the Chapel of St. John (Cappella di San Giovanni) which houses the most beautiful cycle of Giotto School frescoes in the entire province. Another cycle of Giotto School frescoes can be seen in the Franciscan Church as well as a hand-carved wooden altar dating back to 1500. 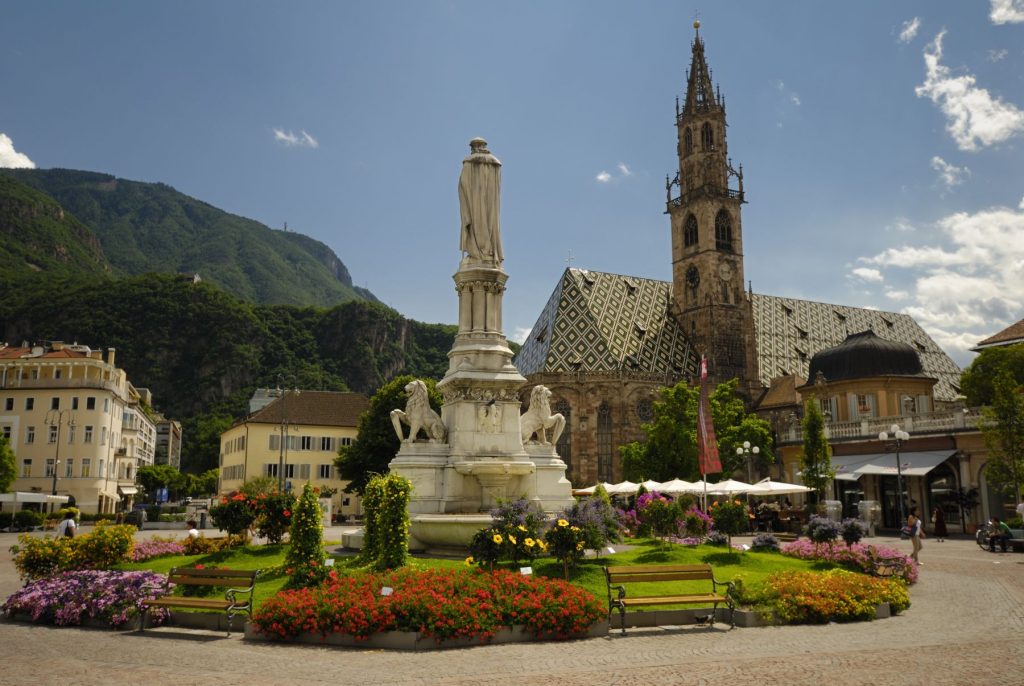 If you have enough time, another fabulous place to visit is the Runkelstein Castle (Castel Roncolo in Italian). Known as the “illustrated castle”, its magnificent frescoes reveal the daily life of the nobles and even depicts King Arthur and the Roundtable. Weather permitting, you can reach the castle by walking or biking along the Talvera River. There is also a free shuttle provided departing from Piazza Walther as well as public transportation. Check the official website for hours and shuttle schedules as they are seasonal.

What Makes Bolzano So Characteristic

Whether you visit during the Christmas season when the square is filled with wooden market stalls for its Christkindlmarkt (Christmas Market) or not, it will be impossible to miss Piazza Walther. Completed in 1808 and ordered by King Massimiliano of Bavaria, it wasn’t named Piazza Walther until 1901 after the German poet Walther von der Vogelweide. Another beautiful square is the Piazza delle Erbe where the fresh produce market is held every weekday. You’ll also notice the amazing Neptune fountain which has been given the title as one of the most beautiful in all of Italy.

Spend some time wandering the characteristic streets that have maintained their original appearance such as Via Streiter and Via Bottai. As you meander, you’ll immediately notice the uniqueness of Bolzano’s culture with respect to other parts of Italy. It is a true mix of Germanic and Italian and there are actually three languages spoken here by the locals- German, Italian, and Ladin. 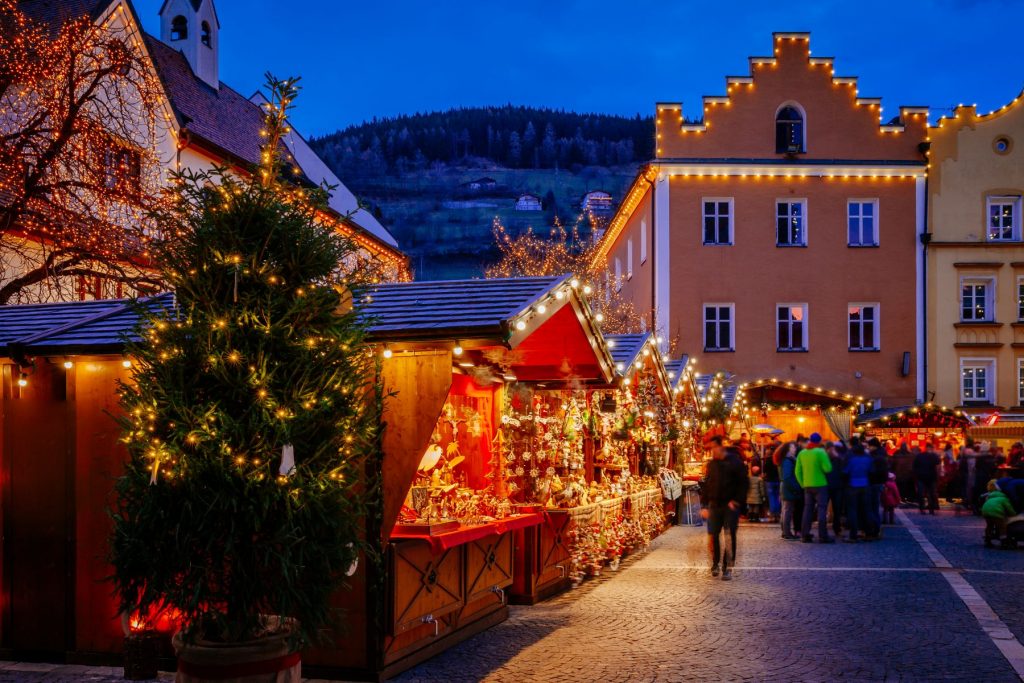 If You Have Time

Make sure to take the cable car from the town center up to the resort village of Oberbozen (Upper Bolzano). It’s only a 12-minute ride and the views are spectacular. Once you’ve wandered around tiny Oberbozen,  you can continue on another train for another 16 minutes across the Klobenstein plateau for even more gorgeous views.

You can also read our alternate itinerary for the city of Bolzano if you have several days here which will allow you to experience an entirely different side of the city.

Its cuisine is also an interesting combination of both Germanic and Mediterranean traditions and includes specialties such as Knödel (bread dumplings), Gröstl (lamb dish with onions and potatoes), speck (a lightly cured ham), dark rye bread, pretzels, and scrumptious desserts such as apple strudel and krapfen donuts. 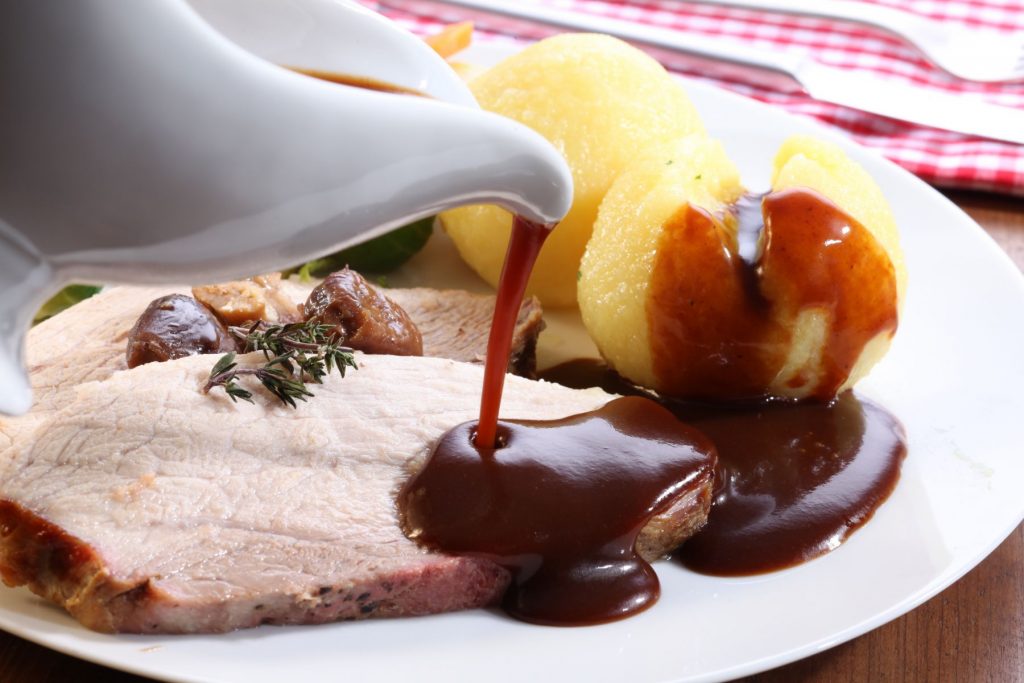