The Leaning Tower and Other Things to See in Pisa

Here are some suggestions of what to see in the Tuscan city of Pisa. Everyone knows about the Leaning Tower, but there are many other amazing sights as well.

What to See in Pisa

Pisa is the second stop on our motorbike tour that started in Lucca. Pisa has many different sides. It’s a city full of history, perfect for young people and well-known for its historic, prestigious universities.

Pisa is famous all over the world for the Leaning Tower and Piazza del Duomo, but Pisa is so much more. You only need to walk around a little to discover all the other jewels of this city. Buildings, squares, monuments, and museums are proof of the eminent past of Pisa, which was once one of the most powerful cities in Italy.

Piazza del Duomo is a World Heritage Site and famous for holding the most important religious buildings of the city: the Tower, the Cathedral (Duomo), the Baptistery, and the Monumental Cemetery. Also known as Piazza dei Miracoli (Piazza of Miracles), the square’s nickname is attributed to the Italian writer and poet Gabriele D’Annunzio who referred to the four monuments as “miracles”.

The most famous monument is certainly the Leaning Tower. It is actually the bell tower of the Santa Maria Assunta Cathedral. Even though it’s leaning, thanks to a physics law, it will never fall down. A ticket will cost you 18 euro. Bear in mind you may want to book a visit in advance in order to avoid the never-ending queue.

An interesting tip is to stand in front of the entrance and look at the side. You will notice two bas-reliefs representing 3 animals: a bear, a snake, and a ram. Pisa is the ram, assaulted by the snake (“evil”) but protected by the female bear (the Virgin Mary). In the past, the new year began on March 25th, the date of the Annunciation and conception of Jesus, which is 9 months before Christmas Day. The zodiacal sign for March 25th is Aries. In addition, the layout of the buildings of Piazza dei Miracoli (Tower, Cathedral and Baptistery) reproduces the shape of the constellation of Aries.

Of course, you can’t miss the chance to pose for a picture pretending to hold the Tower up with your hands. The braver tourists can test more complicated shots like trying to “support” the weight precariously on one leg. It’s more difficult than it seems, believe me! 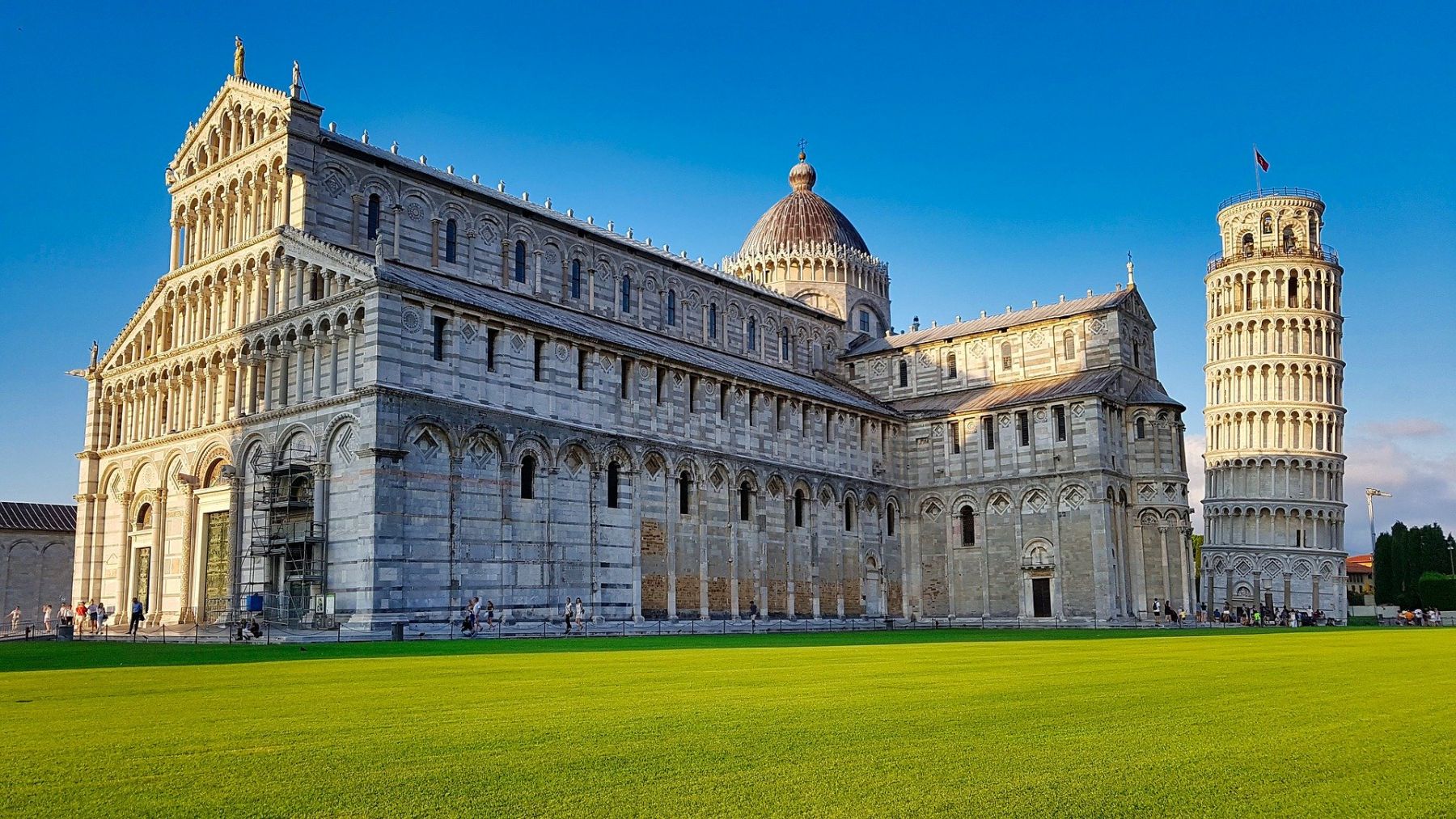 The Cathedral of Pisa (Duomo) is dedicated to Santa Maria Assunta. It is an impressive, stunning building. In 1604, construction began in conjunction with the Basilica of San Marco in Venice. Undoubtedly, between the two Maritime Republics, a competition was underway to see who could build a more amazing structure.

The Baptistery is the biggest in the world and, like many other buildings in Pisa, it is slightly inclined. Due to lack of money, the builder used different materials for the cupola- red tiles and lead slabs- and there are no frescoes on the ceiling.

The Monumental Cemetery is the last of the four “miracles”. The most illustrious characters of Pisa are buried here and, according to legend, the Crusaders brought sacred ground from Golgotha here. Unfortunately, the bombings of the Second World War caused serious damage to the frescoes and restoration is still ongoing.

Other Places to See in Pisa

After the tour in Piazza del Duomo, head off to the banks of river Arno, where young people meet and where tourists can walk, eat and have fun. On the Lungarno Gambacorti, you can see the Santa Maria della Spina Church. A true Gothic masterpiece, its name derives from the fact that in the Middle Ages it held the precious relic of a thorn  (spina) from Christ’s crown. 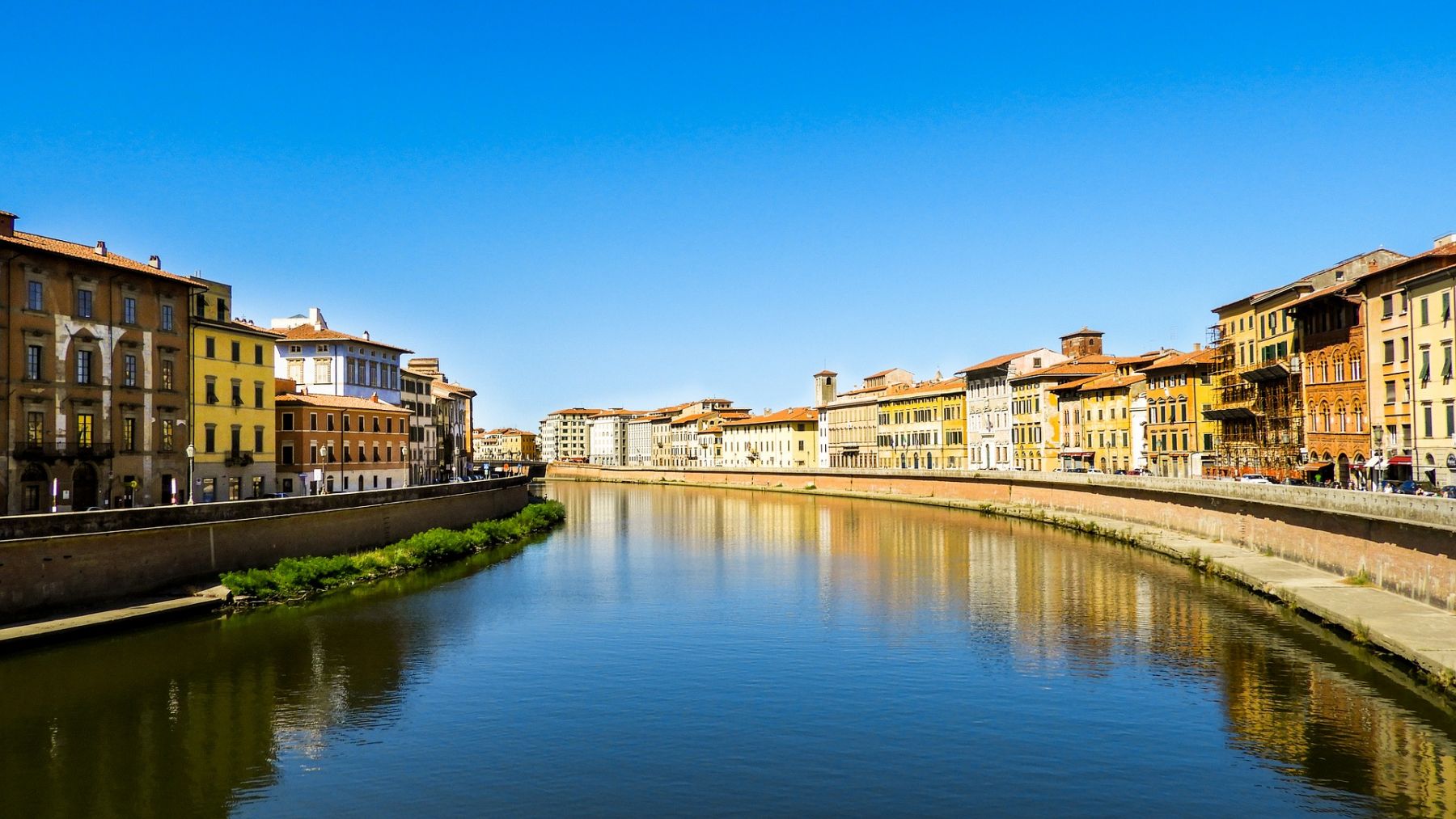 If you don’t want to be defined as a “hasty tourist”, you have to visit Piazza dei Cavalieri. Designed by Giorgio Vasari, it is a real jewel. For centuries, it has been the center of city civil power, nowadays it is famous for the prestigious Scuola Normale Superiore housed in Palazzo della Carovana. The Piazza owes its name to the decision of Cosimo I de’ Medici to establish the headquarters of the Order of the Knights of Santo Stefano. In the center of the square, the statue of Cosimo I de’ Medici dominates the space as the Grand Master of the Order of the Knights. There is also Palazzo dell’Orologio. Its construction work incorporated the preexisting Torre della Fame (Tower of Starvation), where, according to the story told in the Divine Comedy, the Count Ugolino della Gherardesca and his children and grandchildren starved to death.

In Pisa, you will also find contemporary art such as the Tuttomondo mural painted by Keith Haring on the rear façade of the Church of Sant’Antonio. A few months after it was completed, the artist died at just 31 years of age and Tuttomondo is one of his last works. Since Keith wanted the mural to be permanent, he used specific tempera paints and acrylic colors to maintain quality and longevity.

Of course, you can’t miss a walk through the old town center and especially “Borgo stretto” (narrow village). It’s a quaint street with arcades, shops, cafés, and restaurants. While you’re walking, enjoy all the medieval buildings that surround you.