Have you ever been to a place where so much sadness and tragedy occurred that you almost feel like you shouldn’t take any pictures? And if you do take any, then you should definitely refrain from smiling out of respect for those who came before you? Sant’Anna di Stazzema in Tuscany’s Apuan Alps is such a place: a place with a tragic history; a place of extreme reverence; a place that should never be forgotten.

On a perfectly lovely day in mid-May, we set out on a day trip to the historical mountain town of Sant’Anna knowing full well its infamous history. There is only one road that will take you there and it is not for the faint of heart.

From Camaiore (province of Lucca), expect 10 km of hairpin curves that hug the rocky mountain on one side and the woods on the other. In many places, you’ll wonder how it could possibly be wide enough for two cars to pass, yet they do. Sometimes, depending on the car you meet and the location, one vehicle may need to back up to allow the other to pass. Most of the road does have a guard rail, but not all of it. If you know the history in advance, you will also wonder how in the world the German troops discovered this remote area.

Once you’ve parked, blotted off your nervous perspiration, and applauded your brave driver, you will immediately see a little chapel dedicated to Anna Pardini, the youngest victim of the massacre who was just 20 days old.

This is a solemn place. Aside from the paved parking lot and the signage retelling its history for visitors, not much has changed in Sant’Anna since that horrific day on August 12, 1944. The 16th SS Panzergrenadier Division brutally, mercilessly, inhumanely, slaughtered 560 villagers that day: mothers, pregnant women, babies, children, and the elderly. The village priest pleaded with the troops to spare the innocent lives of the townspeople, but to no avail, they murdered him as well. When there was no life left, they burned their bodies, their livestock, and their homes until absolutely nothing remained of Sant’Anna.

Visiting Today: What to Expect

The tiny church dates to the 16th century and inside, you’ll find the altar draped with rainbow flags and prayers for peace for the war in Ukraine, almost 80 years later. 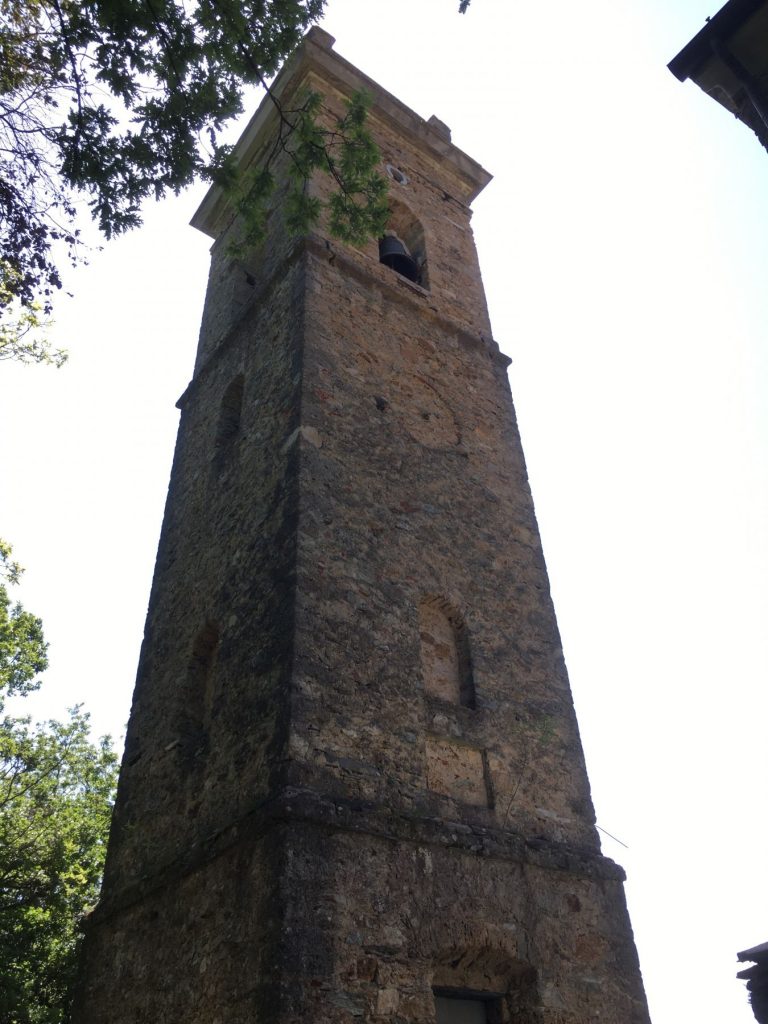 There is a little bar adjacent to the church lawn that serves exceptionally good coffee, drinks, and sandwiches. You can eat outdoors on the lovely patio and ponder about the events that transpired here. Personally, I couldn’t help but wonder what the villagers would think of the place now and how no one could have ever imagined that people would be coming from all over the world to pay their respects.

A recently constructed museum is open every day except Mondays and is free of charge. Please leave a donation! It is extremely well done with testimonials, photographs, and a fantastic museum curator that is passionate about relaying the village’s story to visitors. The day we visited, there just happened to be a very large group of middle-school-age kids on a field trip and she apologized profusely for the inconvenience. I told her that it was wonderful they were there lest not we forget the horrific history of Sant’Anna.

The Via Crucis Walk

I highly recommend taking the walk up the Via Crucis to the ossaria monument. The hike is paved with uneven stones and is steep at times, so it isn’t for everyone. When you reach the top, you’ll have a spectacular view of the Tyrrhenian Sea below and Tuscany’s Versilia coast where some of the most luxurious beach towns are located.

There is an exquisitely carved marble sculpture of a woman holding an infant where visitors still place flowers to this day. I got goosebumps on my arms when a visiting German couple opened up their grocery sack, removed a potted flower they had purchased, and solemnly placed it on the steps in front of the statue. 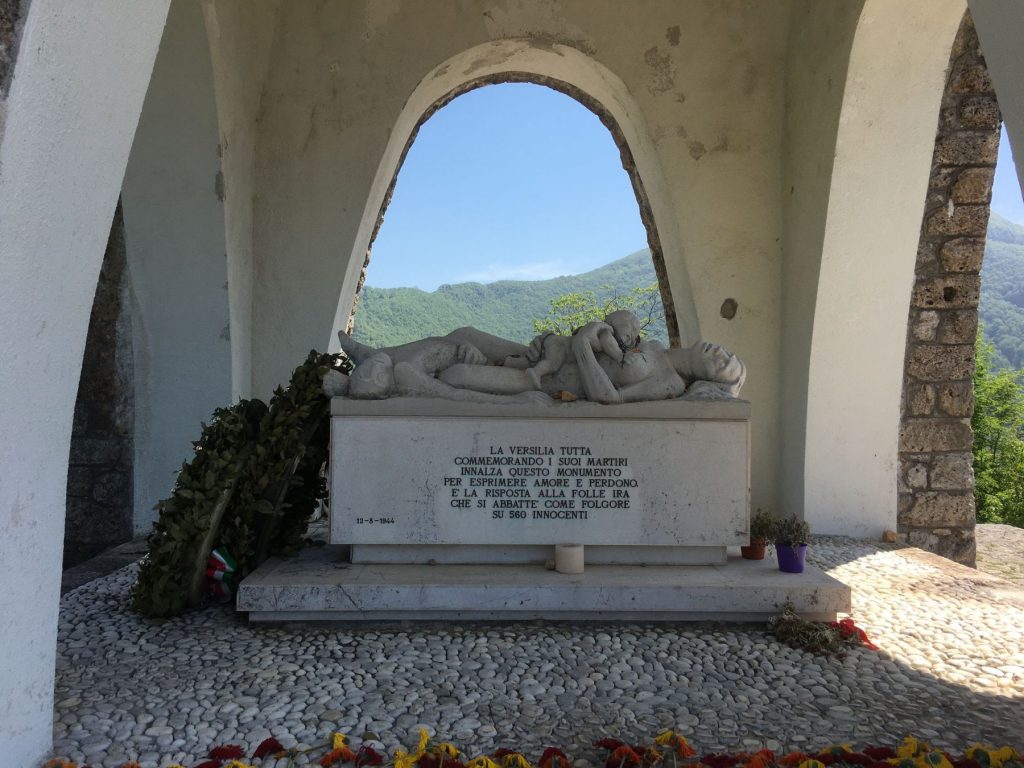 A huge marble slab holds the names and ages of every victim of the massacre, including the eight Tucci children and their mother. The father was not killed that day but lived another eleven years in presumable hell until he took his own life in 1953.

I struggled to comprehend how in a place of such beauty- the very quarries from where Michelangelo obtained the slab of marble for his “David” and the colorful beach cabanas of Versilia all in sight- such unthinkable sadness had transpired. There really is no simple answer, nor justification. 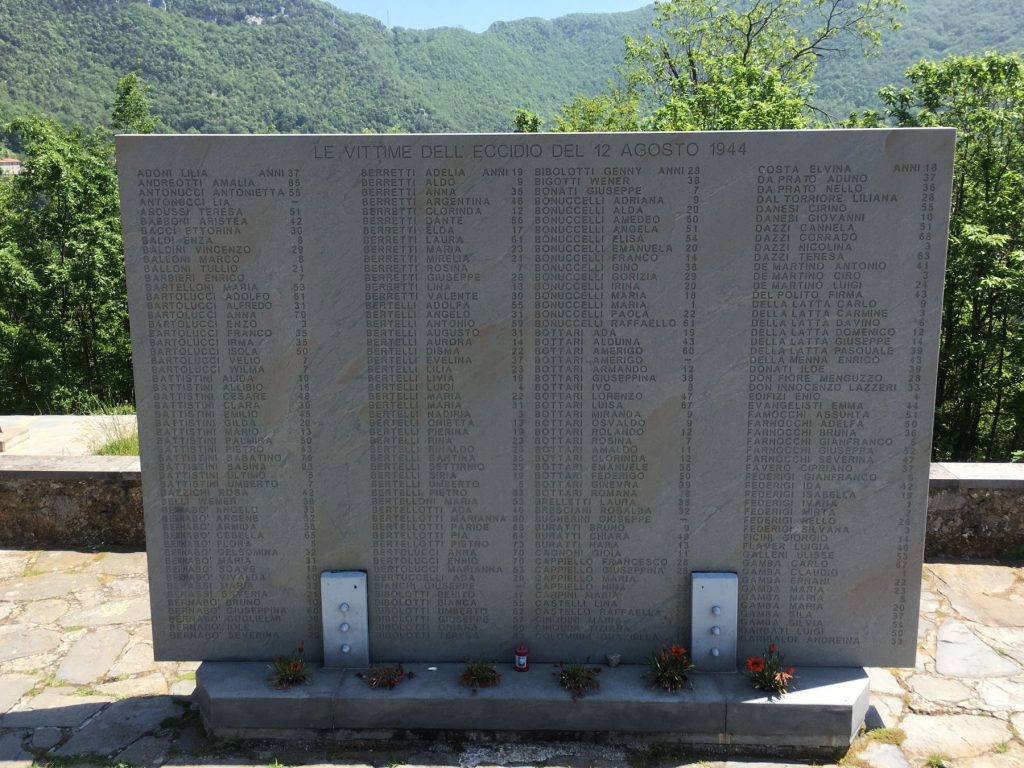 Sant’Anna di Stazzema is a place that we need to visit- that we must visit- both to honor its fallen victims and to learn from history’s mistakes so as never to repeat them.

Learn more about the Apuan Alps and the Garfagnana area of Tuscany and the coast of Versilia.