Stories and Secrets of Palazzo Vecchio in Florence

In the heart of medieval Florence, south of the Cathedral of Santa Maria del Fiore, we find Piazza della Signoria which for centuries has been the seat of political power. 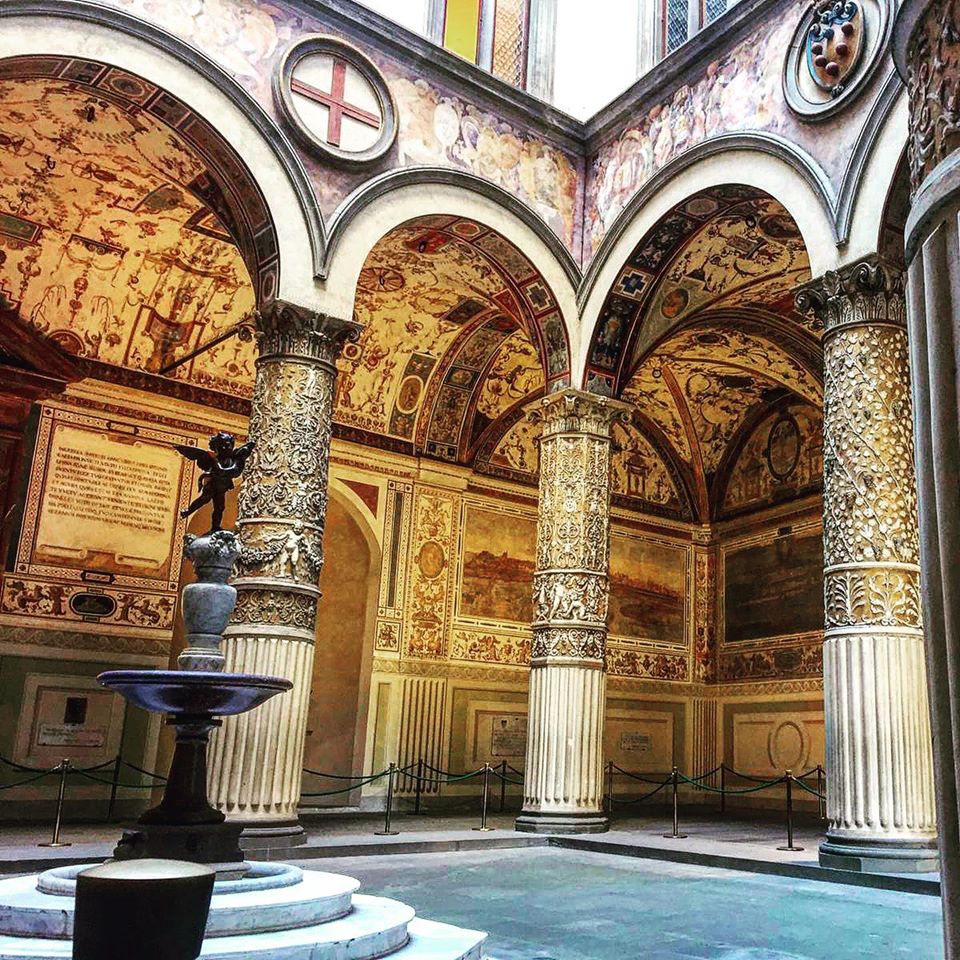 Like all the other large squares in Florence, it is an ancient place rich in art and history that dates back to the 13th century. The ancient Florence described in Dante’s Paradise was in fact a cluster of narrow “tower-houses”, alleys, and arches that formed a sort of labyrinth occasionally revealing piazzas.

It was a vertical city and wealthier families demonstrated their wealth and power by building a taller tower house than the others. Height was also important for safety reasons: within the city there was in fact a real struggle between rival families. The war between the two major influential authorities of the Italian territory- the Papacy and the Empire- was intensifying. The supporters of the two factions will forever be remembered in history by the names of the Guelphs and the Ghibellines.

Piazza della Signoria began to take on its current form in 1268 when the Ghibelline towers in the area were demolished by the Guelphs, who had just conquered Benevento.

The Birth of Palazzo Vecchio

In 1299, Arnolfo di Cambio designed and began building a large palace that would become the symbol of political power in Florence. The building was erected on the ruins of another palace that belonged to the Uberti Ghibelline family. Its architectural elements reveal the historical contrast between the Guelphs and the Ghibellines. The balcony, in fact, has battlements called guelfa (square), while the tower has swallowtail crenellations or ghibelline.

Throughout history, the Palazzo had several names: it was first called “Palazzo dei Priori” because its purpose was to give the “Priors of the Arts” (representatives of professional guilds) a more prestigious location than the modest Palazzo del Bargello. Later, in 1400 it was renamed Palazzo della Signoria, from the name of the ruling body of the Florentine Republic, and then Palazzo Ducale, when Duke Cosimo I de Medici made it his home. Cosimo himself renamed it “Palazzo Vecchio” when he moved his residence to Palazzo Pitti which was purchased in 1550 by his wife Eleonora of Toledo.

The original core of Palazzo Vecchio was erected between 1299 and 1314 and still maintains the appearance of a typical medieval palace from the 1200s: stone cladding, an elevated tower for security reasons and armored doors.

In 1540, Cosimo had recently taken over after the assassination of his predecessor Alessandro de’ Medici, first Duke of Florence. The decision to make Palazzo Vecchio his new home was a shrewd political choice: Cosimo was very young and the people could have doubted him but, with this move, he was now identifying himself with the center of political power.

Cosimo I made use of the collaboration of great artists to renovate the interiors and double the volume of the building, so as to make the message even clearer.

The courtyard was decorated by Giorgio Vasari and other collaborators with stucco and dry paintings of Austrian cities, on the occasion of the wedding of his son Francesco and Joanna of Austria. It was a clear tribute to the bride. The interior is a gigantic exaltation of Cosimo and his family.

Cosimo and His Ego

In the famous Salone dei Cinquecento, commissioned by Girolamo Savonarola during the short period in which he held power in Florence, the celebration of Cosimo starts at the ceiling.

The large paintings and rich decorations in gold are dazzling. Few people know that in order to truly appreciate the room, you should move to the center and look upwards. The wonderful coffered ceiling is a jigsaw puzzle of frescoes and Cosimo is portrayed as part divine and part Roman emperor right in its very center. The message is clear: “Look at me. I am the new emperor of Florence”. 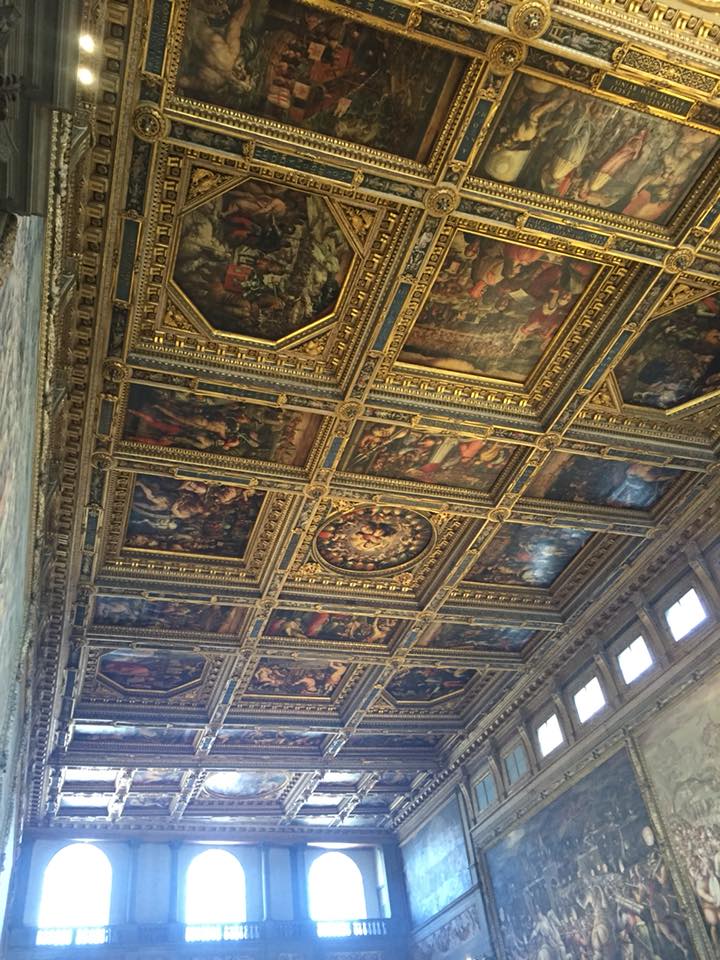 The walls also celebrate the Duke, and future Grand Duke of Florence, Cosimo I. The frescoes are painted almost completely by Vasari and recount two famous battles won by the Florentines: the capture of Siena and the triumph over Pisa.

These frescoes could however hide a secret. In 1504, during the Savonarolian period, the two giants of the Renaissance were summoned to the palace: Leonardo da Vinci and Michelangelo Buonarroti. They were asked to represent two very important battles for the Florentine Republic (the Battle of Anghiari and the Battle of Cascina), and it is said that theirs was a real artistic duel, but neither of the two works was ever completed.

Michelangelo only made the preparatory drawings but never actually implemented them. Leonardo created a beautiful fresco which was immediately ruined because of an experimental technique (similar to encaustic painting) which he chose to adopt. The only evidence of this battle of artistic giants are the sketches and the tales they left behind.

Later Vasari repainted the walls and in one of his frescoes depicting the Sienese we notice something unusual: a very small detail, a green flag with the inscription “Cerca Trova” meaning “he who seeks, finds”. The meaning of this writing has not yet been deciphered but we do know that Vasari admired Leonardo a lot and, if there was something left of his masterpiece, he certainly would not have wanted to destroy it.

The investigations carried out with micro-cameras have identified a cavity between the wall and the fresco which is very unusual because the artists used to fresco directly onto the wall. However, no trace of Leonardo’s work has been found yet.

From the magnificent Salone dei Cinquecento you’ll arrive at the precious study of Francesco I. First of the eleven children of Cosimo and Eleonora, Francesco succeeded his father as Grand Duke of Tuscany in 1564. He was passionate about art, science, and alchemy. Vasari created the Studiolo for him- the real gem of Palazzo Vecchio.

It was a secret room designed for a single person: secluded, designed to hold the most precious jewels and family heirlooms.

The frescoes on the walls are a hymn to nature and its elements: earth, water, air, and fire. But what appear to be simple paintings are actually wardrobe doors and behind one of them, is a secret passage leading to his father Cosimo’s Tesoretto. This was a special place for the collection of rare and curious objects such as exotic shells, Etruscan finds, and much more.

The staircase continues and leads up to the majestic Hall of Geographical Maps. This also hides a secret passage that leads to Bianca Cappello’s dressing room, who was initially Francesco’s mistress and later, his second wife.

Next to the Salone dei Cinquecento, we find apartments reserved for guests decorated and designed in such a way as to celebrate the Medici family’s power. Each of them is dedicated to a member of the Medici family.

But what is really interesting is the analogy between the first and second floors. For each of the rooms on the first floor, there is one on the second floor dedicated to a god of Greek mythology as if to compare the Medici to the gods.

Each room tells of the personality and virtues of these famous characters through paintings and hermetic symbols. One of the most recurring symbols, for example, is a ring with diamonds which we also find in the center of many floors. It is one of the symbols most dear to the Medici family, alluding to political power. 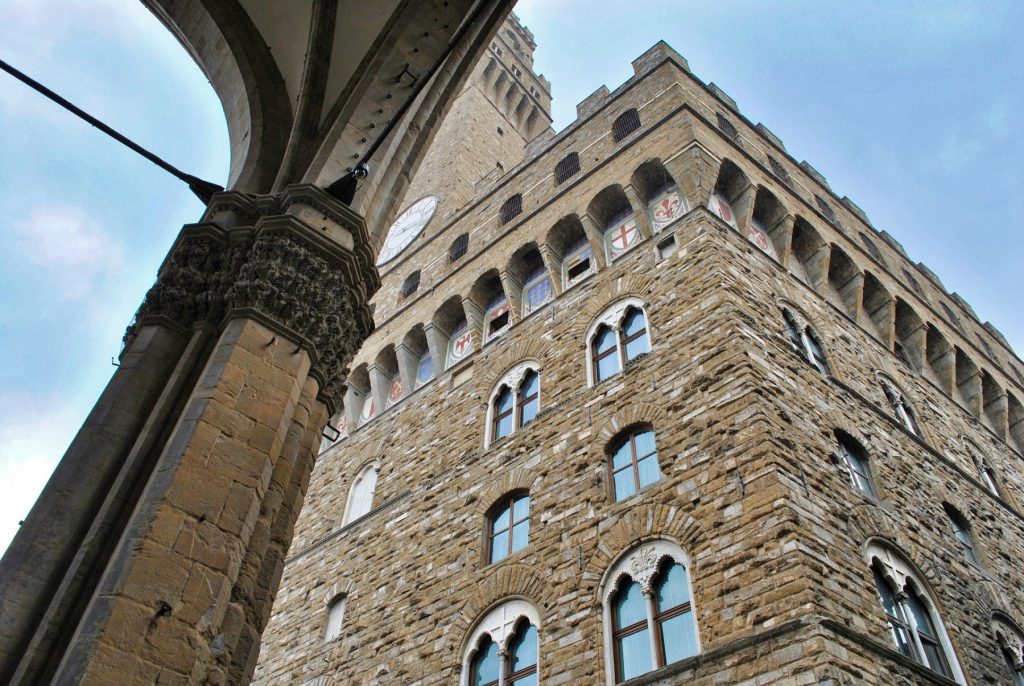 The Return of Dante

Palazzo Vecchio also preserves the funeral mask of the great poet Dante Alighieri, found in Ravenna and donated to the municipality of Florence in 1911. It is the plaster cast of the poet’s face, sculpted in 1481 when his tomb in Ravenna was restored.

During a tour in the heart of Florence it is also possible to visit the Arnolfo tower. The peculiarity of the 94-meter tall decentralized tower is the fact that the initial project of Palazzo Vecchio exploited a pre-existing tower (the Foraboschi Tower – called “della Vacca”) while its foundations rest on the remains of an ancient Roman theater.

Inside, a staircase of 223 steps will take you to the top of the tower, where the “small hotel” is located. Florentines refer to it as such but it is actually the cell where Cosimo the Elder was imprisoned in 1433 and then Savonarola, before being burned in the square below.

Palazzo Vecchio is a building rich in history and hidden paths. There are stairs, tunnels, and rooms that hold priceless treasures and recount a passionate and intriguing history. It is a palace to be discovered.