The Magnificent Duomo in Florence

Florence, Firenze, Florencia, Florenz: even its name is beautiful in whichever language you choose. The Tuscan capital and one of the most important centers of art, architecture, and literature in the entire world is quite simply put- beautiful. There could be, and in fact, there are, probably hundreds of thousands of articles written about each of its magnificent landmarks, monuments, art, and artists. This article will simply focus on the very heart of the city: the Piazza del Duomo and all the monuments that are located here. 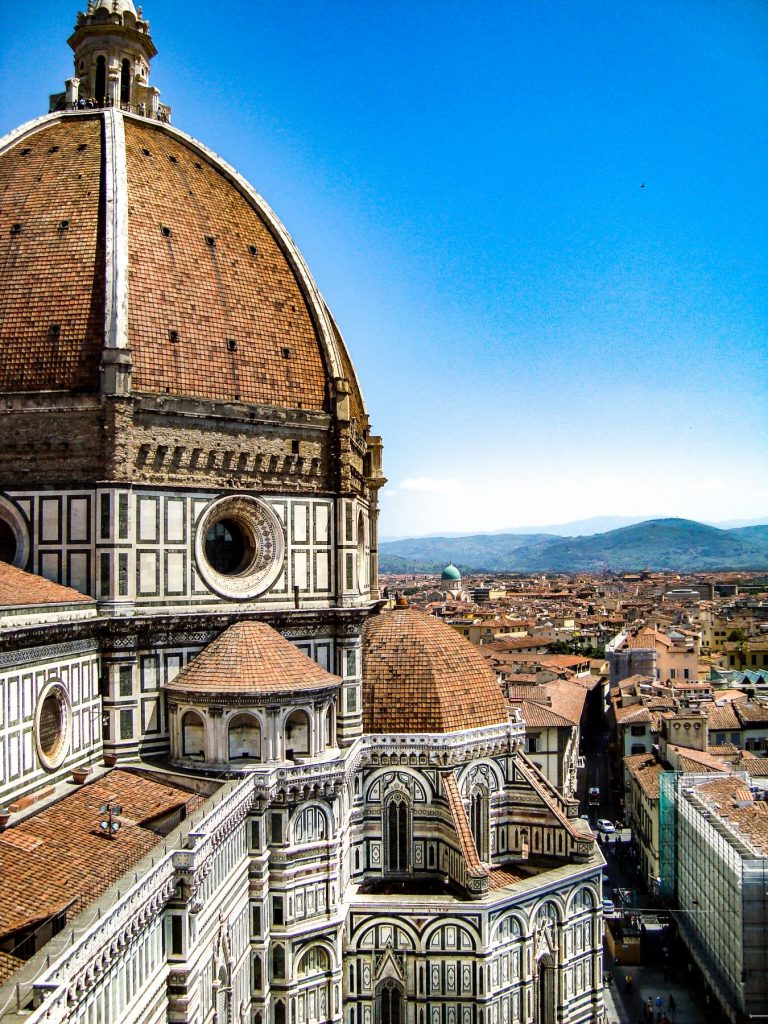 True for cities throughout Italy and most of Europe, the beating heart of its people is the central piazza. In Florence, this is the Piazza del Duomo. The word duomo simply means “cathedral” and as you travel through Italy, you’ll notice that most cities do not bother referring to their main cathedral by its proper name. Some locals may not even actually know the official name. Florence’s cathedral is no exception. The official name is the Cathedral of Santa Maria del Fiore (meaning Saint Mary of the Flower) or in Italian la Cattedrale di Santa Maria del Fiore. That’s a mouthful! It’s much easier to just say “duomo”.

Designed by Arnolfo di Cambio (who also designed Palazzo Vecchio and the Santa Croce Church), cathedral construction began in 1296. The actual grounds already had an existing church dedicated to Saint Reparata which was founded in the 5th century. The Church of San Lorenzo dates back even earlier and it is widely accepted that these two churches were not large enough to serve the growing population of Florence.

1296 was during the era of Gothic construction and Florence’s Duomo is a prime example of this type of architecture. Di Cambio died shortly after construction began and it wasn’t until 1334 that a new architect would be appointed: Giotto. He worked alongside the great Andrea Pisano only until Giotto’s death in 1337. During the brief three year period, Giotto managed to leave his legacy for all time- the campanile or the bell tower. 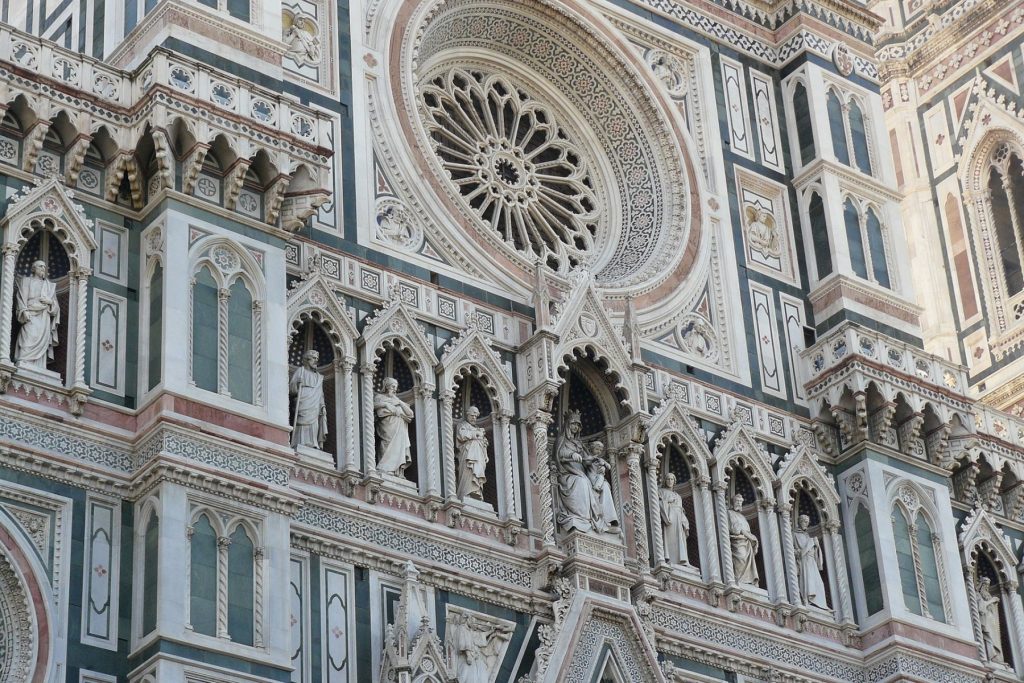 Pisano took over the project and it was soon halted once again- this time due to the Black Death that ravaged Florence in 1348. It’s estimated that between 60 to 80% of the population died in just 2 years time. Thankfully, Pisano lived as did many other great artists and architects that would continue the massive project.

There were many greats that deserve mentioning: Francesco Talenti who continued the bell tower; Giovanni di Lapo Ghini who divided the center nave in four;  Alberto Arnoldi; Giovanni d’Ambrogio; Neri di Fioravante; and Andrea Orcagna. Incredibly, by 1418, the only part left to complete was the famous dome.

An architectural design competition was held in 1418, which produced two more masters by the names of Lorenzo Ghiberti and Filippo Brunelleschi. Ghiberti had already been commissioned for the bronze doors on the baptistery in 1401. This time, Brunelleschi won and his name would be forever attributed to the famous dome.

On March 25, 1436, 140 years from its start date, the Duomo was consecrated. This date was chosen carefully as per the Florentine calendar, it marked the first day of the year. Of course, if we were to go back in time and witness the consecration, the Duomo would have looked quite different than it does today. The exterior had not yet been decorated with the striking polychrome marble (white from Carrara, green from Prato, and red from Siena) for which it is so notorious. Work on the exterior actually went on through 1887.

If you are not familiar with Gothic architecture, or even if you are, the interior of one of the largest churches in the world is not what you would expect. It’s quite stark in comparison to the “eye-candy” exterior. The mosaic floors are spectacular though! Be sure to look up above the main entrance to see the clock that dates back to 1443 and still works! Spectacular frescoes by Vasari and Zuccari adorn the interior of the dome. Other masterpieces include Dante Before the City of Florence by Domenico di Michelino; the Funerary Monument to Sir John Hawkwood by Paolo Uccello; and the Equestrian Monument of Niccolò da Tolentino by Andrea del Castagno. 44 stained glass windows by masters such as Donatello, Ghiberti, Uccello, and del Castagno were a massive undertaking for the time period. 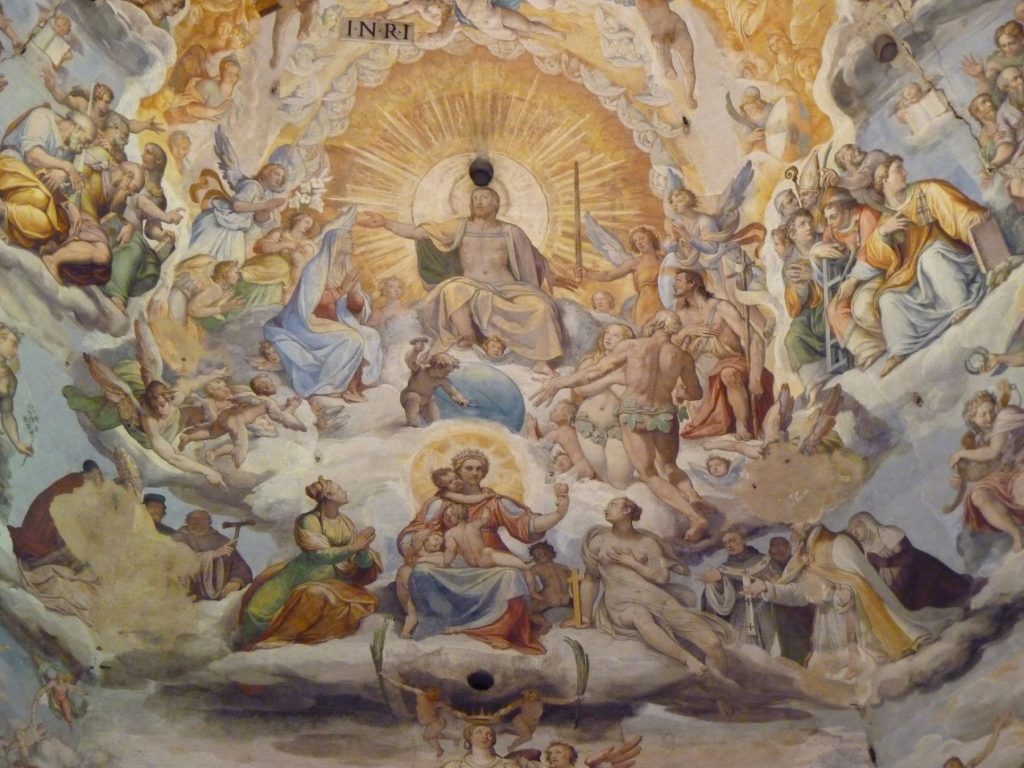 The octagonal-shaped Baptistry of St. John (il Battistero di San Giovanni) is equally astounding and its bronze doors are some of the most well-known in the entire world. Its actual construction date is somewhat up for debate but one thing remains certain, it predates the Cathedral and it was definitely built on the ancient remains of another baptistry (4th-5th century AD). The South Door is the oldest (1330- 1336) and depicts the life of St. John by Pisano while the North Door depicts scenes from the New Testament. Of course, one of the must-sees on any trip to Florence is the Gates of Paradise by Ghiberti and his assistants including della Robbia.

The bell tower, dubbed il Campanile di Giotto, is an astounding 84 meters-tall and makes up the famous skyline of the city. As mentioned earlier, Giotto began the project in 1337 but died just four years later. Sadly, he never got to see its completion. The sculptures that adorn it are each worth appreciating individually and thankfully, the originals are preserved in the Duomo’s Museum.

If you are in pretty good shape and don’t suffer from claustrophobia, you can purchase a ticket that includes access to the terrace rooftop and after a 400-step climb, you’ll take in a view that will probably be the highlight of your trip. The bell tower is often less crowded than the more popular Duomo climb!

Located near the Duomo, the Museum is a must-see. 25 rooms on three floors hold some of the most magnificent sculptures and art in all of Italy. Many are the originals that adorned the Duomo, the baptistry, and the bell tower.

A single ticket costing only 18 euro will get you into the cathedral, the dome, the baptistry, the bell tower, the crypt, and the museum. Tickets are valid for 72 hours so you don’t need to rush through your visit all in one day. If you decide on climbing to the top of the dome, a reservation is mandatory. Other important tips to note are on the official website and include dress code rules (no shorts, bare shoulders, sandals, hats, or sunglasses and no bulky bags).

The Museum (meaning the entire Cathedral complex) is taking the appropriate measures for reopening due to COVID-19. Please visit the official website for all updates as well as virtual tours and in the meantime, download the app which gives you amazing access to all the key features!

Post Views: 1,043
Redattore
What to See in Trapani, Sicily
Forlì in Italy’s Emilia-Romagna Region: Everything You Need to See