Florence is absolutely one of the most beautiful cities in Italy. Its great art and culture is known practically all over the world. It’s a fascinating city to experience both day and night, strolling through its ancient streets or across the Ponte Vecchio. The historic center is rich in works of art, both throughout the streets and in the numerous museums. Today, we’ll cover just one of the hundreds of magnificent places to visit within the city: Palazzo Vecchio. 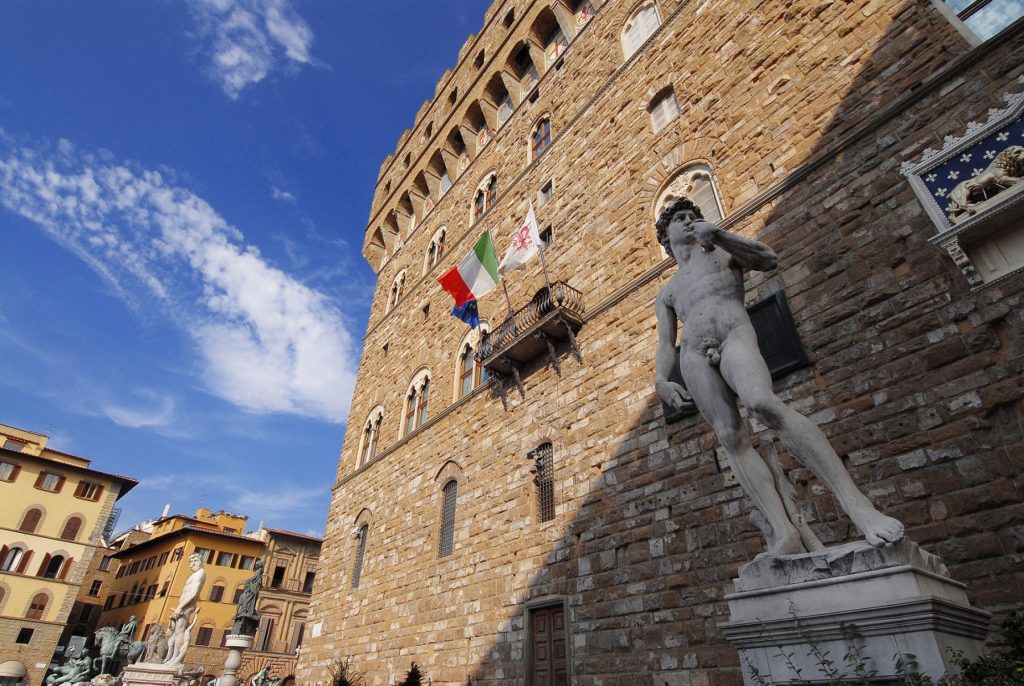 During the Middle Ages, the city of Florence grew and it became a municipality. In order to ensure adequate protection for the magistrates, by the end of the 13th century, it was decided that a government palace was to be built. It has had several names like Palazzo dei Priori, Palazzo della Signoria, Palazzo Ducale and finally Palazzo Vecchio.

The building’s construction has been attributed to Arnolfo di Cambio. Construction began in 1298 where the Palazzo dei Fanti and Palazzo dell’Esecutore di Giustizia were before. Although the building was not finished yet, in 1302, the palace housed the city council. Arnolfo di Cambio died in that same year and the construction wasn’t completed until 1314. The palace was expanded over the centuries and by the end of the 16th century, basically looked as it does today.  From 1865 to 1871, the building was used as the Chamber of Deputies of the Kingdom of Italy, and since 1872, has housed the city mayor’s offices.

The palace is Gothic style and there are two types of battlements: the gallery is Guelph while the tower is Ghibelline. There are four statues at the entrance: two copies of Judith and Holofernes and Marzocco by Donatello; a replica of Michelangelo’s David; and Hercules and Cacus by Baccio Bandinelli. The Tower of Arnolfo was built over the tower of the Firaboschi family, whose name was “La Vacca”. Along some of the walls of the palace there is a series of coats of arms linked to the Florentine Republic, such as the red eagle with white background, the golden keys with red background and the Florentine fleur de lis (il giglio).

Within the palace you’ll find several rooms, such as the Salone dei Cinquecento (Hall of the Five Hundred), which was built by Simone del Pollaiolo at the behest of Girolamo Savonarola. Later, it was enlarged by Baccio Bandinelli, Giuliano di Baccio d’Agnolo and Giorgio Vasari. Among the other rooms in the palace, it is possible to visit the quarters of Pope Leo X, the room of Cosimo de’Medici (depicting Cosimo’s life), the room of Lorenzo the Magnificent and the room of Pope Clement VII. In addition to these rooms, you can also visit the Studiolo of Francesco I (studiolo means “small study”) designed by Giorgio Vasari, the Quartieri Monumentali and the hall of geographical maps. For more information, visit the official website at Musei Civici Fiorentini. 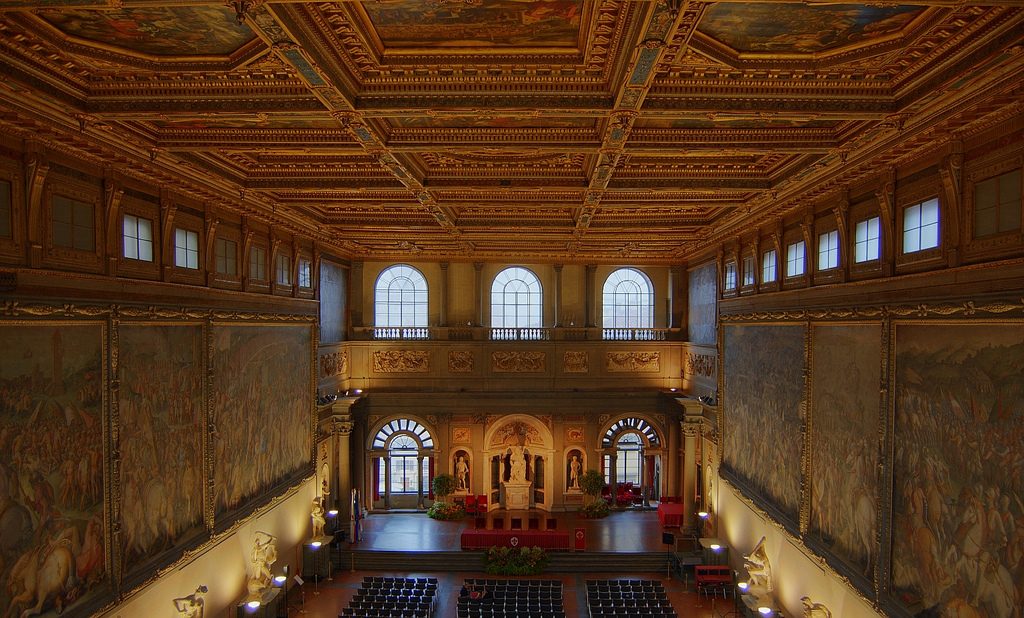 How to Reach Palazzo Vecchio

Today, Palazzo Vecchio is both a town hall and a museum. It’s easily accessible by taxi or by walking from the Santa Maria Novella train station. Bus lines C2 and C3 will also get you there.

Read more on Tuscany and its events if your travels include seeing more of this beautiful region!