The medieval village of Palazzuolo sul Senio is located in the mountains outside of Florence known as the Upper Mugello region. This area is often referred to as the “Romagna Toscana” because geographically, historically, and culturally, it is very close to the Emilia-Romagna region, but it has been governed by Florence and Tuscany since the end of the 14th century.

Palazzuolo is a tiny, medieval village surrounded by woods and chestnut groves. The luxuriant woods rich in timber are an economic resource for the locals as well as the cultivation and harvesting of the renowned chestnuts protected by the IGP label, the Marrone del Mugello.

In Harmony with the Environment

In this small town, there are no polluting farms or intensive cultivation. The stream waters flow from the highest mountain peaks into the Senio river which intersects the town and then continues on through Tuscany and Romagna for about 90 km before flowing into the Reno.

The Senio stream with its magnificent waterfalls has numerous spots where you can take a cool dip in the water. 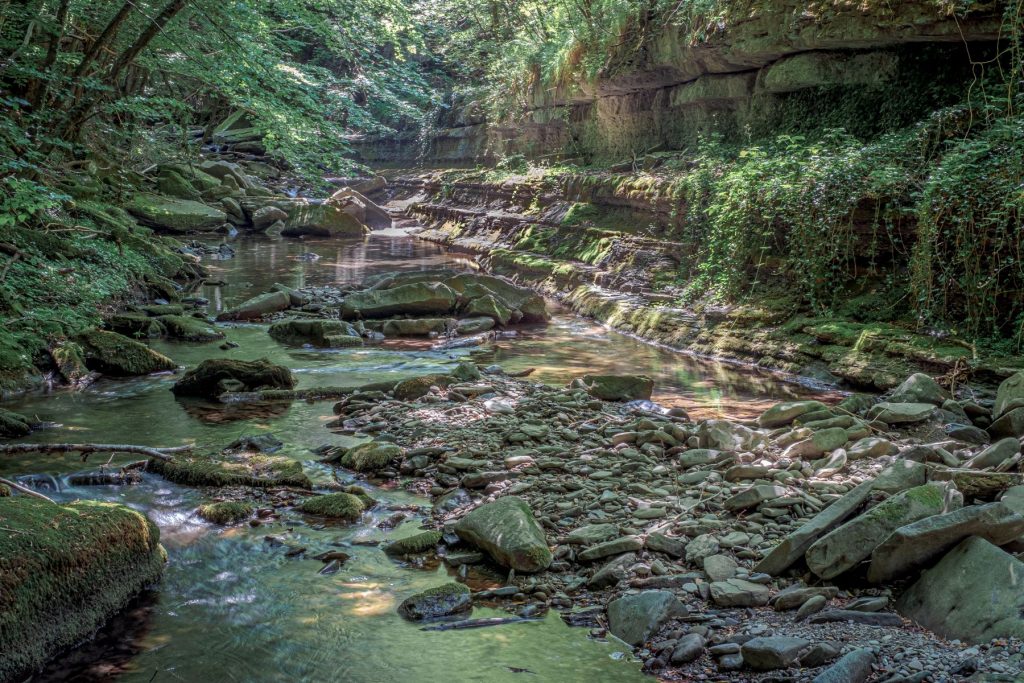 Palazzuolo sul Senio has everything you could need or want while you visit. For those who have the privilege of being let in on this little secret, this is a true haven where visitors can get in touch with nature and enjoy the hospitality of the locals.

One of the “Most Beautiful Villages in Italy”

In July 2018, Palazzuolo was named one of the “Most Beautiful Villages in Italy”, the prestigious club that rewards small towns of particular historical and artistic interest nationwide. In 1999, the town took part in a competition promoted by the magazine Airone where it was named one of the 10 most “livable municipalities in Italy”.

Throughout the town center, you will come across historic buildings that still retain evidence of an important past. They may not be as well-known as those of the nearby art cities of Florence, Bologna, and Ravenna, but they are beautiful nonetheless.

“A Walk Through History”

Recently, local cultural associations have created a project entitled A Spasso con la Storia or a “Walk Through History”. This is a historical route where the visitor will find signs with information and QR codes at 18 key sites in Palazzuolo and the immediate area. It is an innovative way to experience the area’s rich cultural heritage through modern technology in various languages.

Two small gems to visit are the Archaeological Museum where you’ll find evidence of man’s presence in the Upper Mugello from prehistoric to modern times. You’ll also find out about the peasant civilization which tells the story of the mountain people of the first half of the 20th century. The peasant community underwent a radical change after the war as it saw the depopulation of the territory. Both museums as well as the tourist information desk are housed in the historic Palazzo dei Capitani (formerly Palazzo Ubaldini) dating back to the end of the 14th century.

The parish church of S. Stefano, with its scenic staircase dedicated to the patron saint, of ancient paleochristian origin, unfortunately, has lost its original features due to the numerous restorations it underwent after the war. Inside, you can still admire various decorations made by the artist Tito Chini around 1936 and numerous other valuable paintings dating back to the sixteenth and seventeenth centuries.

At the foot of the staircase is the old Ghetto Ebraico, a suggestive hidden corner to visit built around the end of the 1300s and active until around the 1600s. The “ghetto” housed a small Jewish community, charged with collecting the toll for those crossing into the Romagna region. Since trading was forbidden to Christians, it was relegated to the Jewish population.

Continuing on, you’ll come to piazza del Crocefisso, which owes its name to a small oratory located in the old hospital of Santa Maria Maddalena. Inside, there once was a fantastic fresco depicting the Crucifixion that today we find made of ceramic and affixed to the wall of a private house by the multifaceted local artist Girolamo Bonomi.

Crossing the bridge over the river Senio you can stop in the shade of piazza Garibaldi’s arcades which remind us of its ancient function as a marketplace in the center of the ancient Palatiolum, an important commercial crossroads since the early Middle Ages.

Piazza Strigelli is impressive with its typical amphitheater appearance and was where the medieval processions took place. The Strigelli Palace was built in 1804 where the Eschini Palace once stood centuries earlier. Today, the baron’s tower still exists. 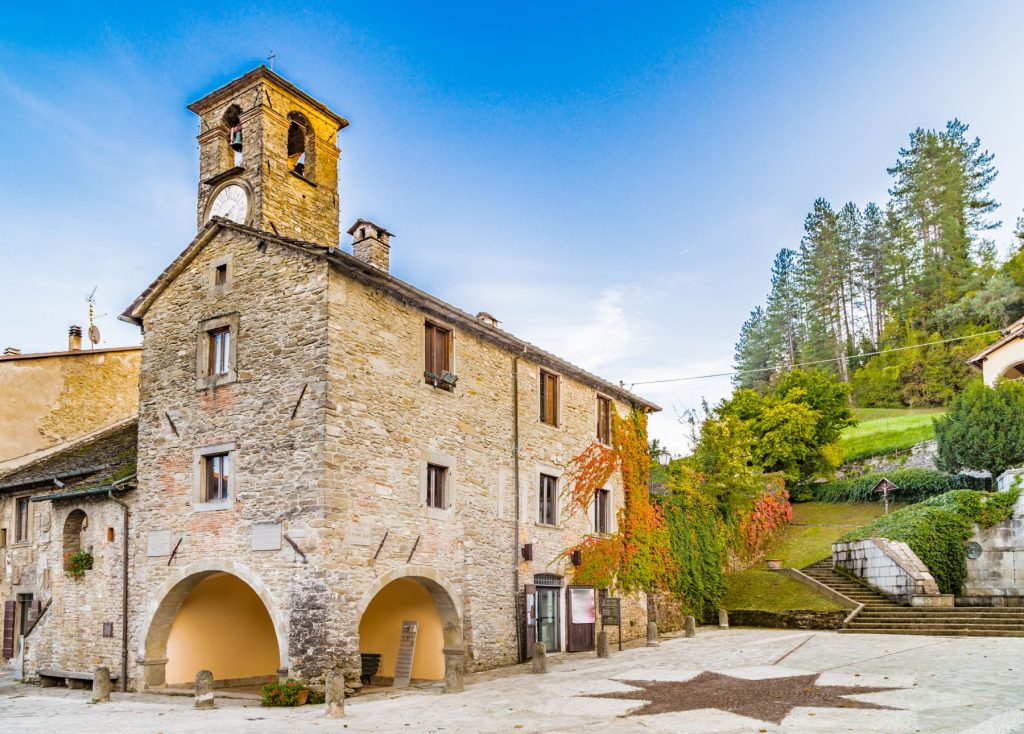 One of the most important symbols of Palazzuolo is by far the Palazzo dei Capitani. It dates to the fourteenth century and was the residence of the noble Ubaldini family. You can admire the many family crests that adorn the facade as well as the striking clock tower.

On the south side of the square, you can see the ancient tower and the only stone building which is now the Torre del Vicario holiday residence. It was used both for residential and military purposes and was once connected to the Palazzo dei Capitani which still retains some of its original characteristics.

Behind the Palazzo dei Capitani is the seventeenth-century church of S. Antonio which is undoubtedly the most photographed building in town. Just below is the artistic basin by architect Adolfo Natalini embellished with three bronze panels by Natalini’s close friend and artist Roberto Barni, depicting the three streams that flow into the Senio.

In piazza Ettore Alpi, you’ll find the Cappella dei Caduti or the Chapel of the Fallen in the portico of the current town hall (formerly the 17th century Filipponi Palace), by the renowned Mugello artist Tito Chini.

The nearby ancient village of “Borgo dell’Ore” gives you the opportunity to get lost in the magic of dark alleys and little piazzas such as Piazza del Grano which have remained unchanged since medieval times.

The community prides itself on being environmentally conscious and green. Not only can you relax, but in Palazzuolo you’ll be able to come into contact with the natural surroundings that have remained unchanged for centuries. From taking pleasant walks to more intense hiking routes, Nordic walking, horseback riding, mountain biking, and more, it’s all possible here. There are also various cultural and food and wine events throughout the year.

The village has a public swimming pool, tennis courts, volleyball court, mini-golf, a sports field and a beautiful and well-organized survival course, a campsite, and a camper park. 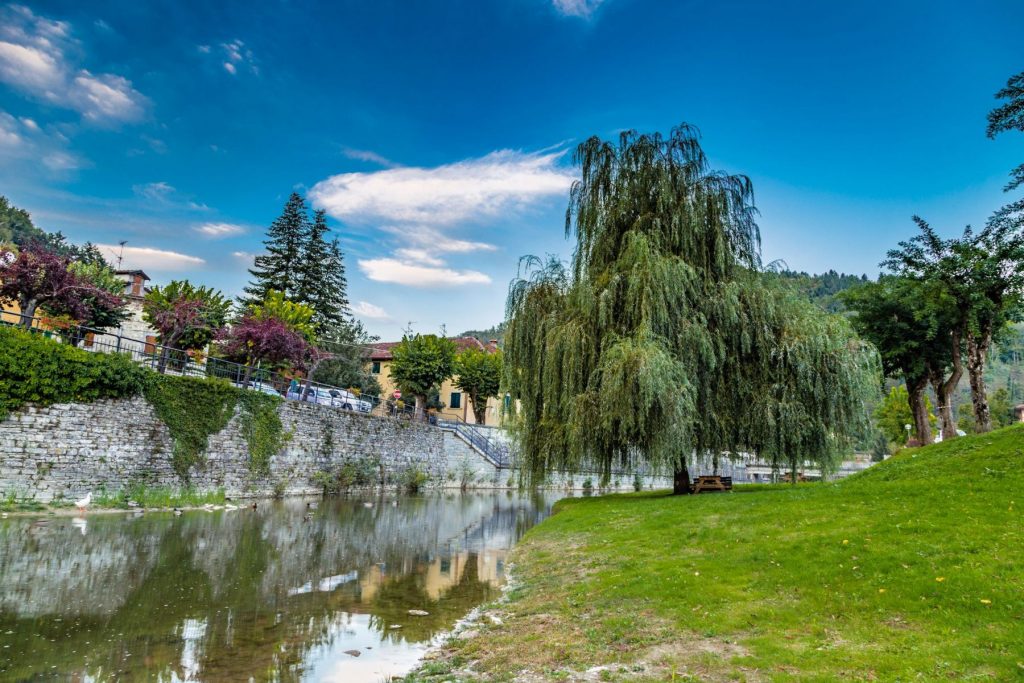 “Palazzuolese” food traditions are filled with the flavors and aromas of local products and is deeply rooted in the peasant tradition. Recipes handed down from generation to generation continue to be the centerpiece of daily meals here. During cultural events, many of the dishes can be tasted in the piazza.

Sausages made of pork and wild boar can be found in the local butcher shops and the surrounding chestnut groves provide flour that is transformed into delicious cakes, tortelli pasta, castagnaccio cake and much more. Chestnut flour polenta has helped to feed entire generations of Palazzuolesi allowing them to survive in difficult times.

Wild game and other delicacies from the woods such as mushrooms and truffles flavor the mountain potato tortelli typical of the Mugello region. The stuffed pasta tradition was inherited from nearby Romagna, including cappelletti, passatelli, and tortelli with spinach and ricotta. Ancient grains are still widely used as well as black chickpeas.

Finally, we should mention the forgotten fruits that filled the tables of our ancestors: vulpine pears, carnelians, and rowanberries from which liqueurs and jams are made. These ancient flavors are both a reminder of the past and appreciated today as a delicacy by the new generation.