1951, a magical year for Venice. The most intriguing glimpses of the city are co-stars of the most popular fashion designer in the world at the time: Christian Dior.
And in the same year, on September 3, the “Ball of the Century” is celebrated at Palazzo Labia, Le Bal Oriental commissioned by Don Carlos de Beistegui y de Yturbe, which attracted a thousand jet setters from 5 continents. A masked ball that engaged Dior, with Dalì, the very young Cardin, Nina Ricci and others, to create costumes for the illustrious guests. An event that reverberated the glories of eighteenth-century Venice across the world. 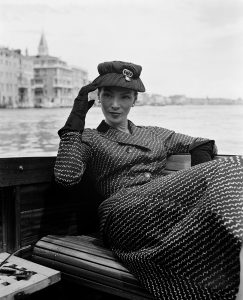 The photographers of Cameraphoto were the silent witnesses of both events. The Venetian photographic agency was founded in 1946 by Dino Jarach, who “covered” and documented everything special that happened in Venice and beyond.

By the will of Vittorio Pavan, current conservator of the imposing Archive of Cameraphoto (with more than 300 thousand filed negatives) and Daniele Ferrara, Director of the Veneto Museums, the images of those two historical events are exposed to the public. An extraordinary location, Villa Nazionale Pisani in Stra, has been chosen for their re-emergence. The “Queen” of the Venetian Villas, by no coincidence, is embellished with wonderful frescoes by Giambattista Tiepolo: an artist who dominated the memorable party of 1951 from the ceilings of Palazzo Labia.

For this exhibition, Pavan has selected 40 images from the collection staged in Venice by Christian Dior. In those years, each show featured just under 200 models, carefully calibrated between easily wearable garments and other more challenging ones. Dior was the tutelary deity of post-war fashion. His collections were anticipated and contended around the world. It is estimated that 25,000 people flew over the ocean every year just to see (and buy) his proposals. Each new line (with every season) was greeted with enthusiasm and fierce criticism, depending on which fashion “clan” the critic sided. 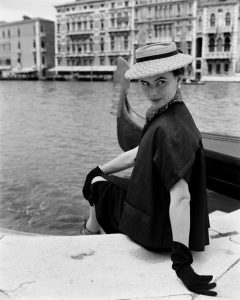 In any case, no woman who wanted to be fashionable could ignore the dictates of the Parisian couturier of Avenue Montaigne– a Maison that had already engaged over a thousand collaborators. His new look evolved season after season. In 1950, he imposed the Vertical Line, in 1951 – as documented by the images displayed in Villa Pisani – women could only dress in Oval: rounded shoulders and raglan sleeves, fabrics shaped to become a second skin with the essential accessory- the coolie hat.

For autumn, he created the “Princess” line in which the waistline gave the illusion of extending to below the breast.
In the images of Cameraphoto, the beautiful models dressed in Dior duet with Venice. The canals, churches, and buildings are never a pure background but rather protagonists on par with the creations of the great tailor.

The second part of this fascinating exhibition is dedicated to the Grand Ball of Palazzo Labia, the social event of the century.
The whole beautiful world came to Venice on that mythical September 3rd date. Don Carlos’, popularly referred to as “the Count of Montecristo”, invitation reached a thousand people. Dior, with a group of young tailors and with Dalì, were busy creating the most fascinating dresses, all recalling the eighteenth century of Goldoni and Casanova. Costumes were also made for greyhounds and other dogs that often accompanied their owners.

The lights that mythical night illuminated the likes of: the Dukes of Windsor, the Marquis of Spain, Aga Khan III, King Faruq of Egypt, Winston Churchill; many other royalty, princes and princesses; millionaires; artists like Fabrizio Clerici and Leonor Fini; designers like Balenciaga and Elsa Schiapparelli; jet setters like Barbara Hutton, Diana Cooper, Orson Welles, Daisy Fellowes, Cecil Beaton (whose images, published by Life, made the world dream), the Polignacs, and Rothschilds.

To welcome them, amid clouds of dancers and harlequins, dressed as the Sun King with 40 cm high platforms, was their host, Don Carlos. He was the heir of an immense fortune created in Mexico. He lived in Paris, where he owned a house designed by Le Courbusier and decorated by Salvador Dalì, and a country castle. He had bought and restored Palazzo Labia and offered it to his friends. 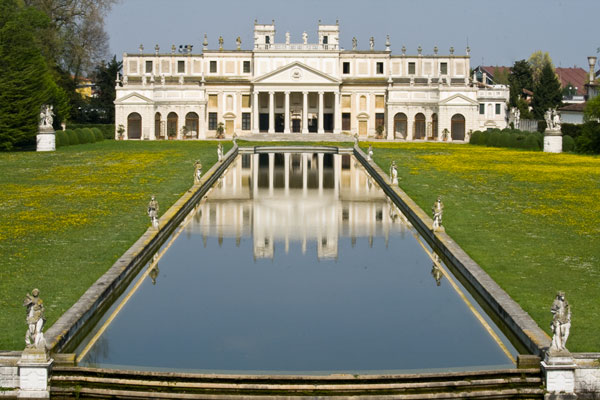 The exhibition’s goal is to enhance the Cameraphoto photographic archive, declared as an exceptional cultural interest by the Ministry of Cultural Heritage and Activities: an invaluable asset in terms of the richness and variety of the images that constitute it.

To this end, we chose the nucleus of photographs that depict the clothes of one of the most brilliant and iconic designers in the fashion world who, in turn, through his creations, allowed us to focus the light on a fragment of the millenary history of Venice, helping us to reconstruct the collective memory on which our present is based.

Post Views: 1,410
Redattore
April in Cesenatico
In the Land of the Peligni