The Scuole Grandi of Venice: Art and Power

You could say that I know Venice well. I have always lived near this city and I have had the opportunity to visit it during the quiet autumn days when the onslaught of summer tourists is a thing of the past.

Yet I am still amazed at how Venice is an inexhaustible source of curiosity and an example of how the Serenissima Republic of Venice managed to precede the times by managing its institutions.

The Scuole of Venice

The story I’d like to share is illuminating. From the second half of the 1200s to the 1500s, the Schools of Arts and Crafts and the Scuole Grandi (or “Large Schools”) were born in Venice. The term “School” identified not only the building but also the corporate association that was based within its walls. All the confreres belonging to the same school chose a patron saint and a banner they carried in processions. 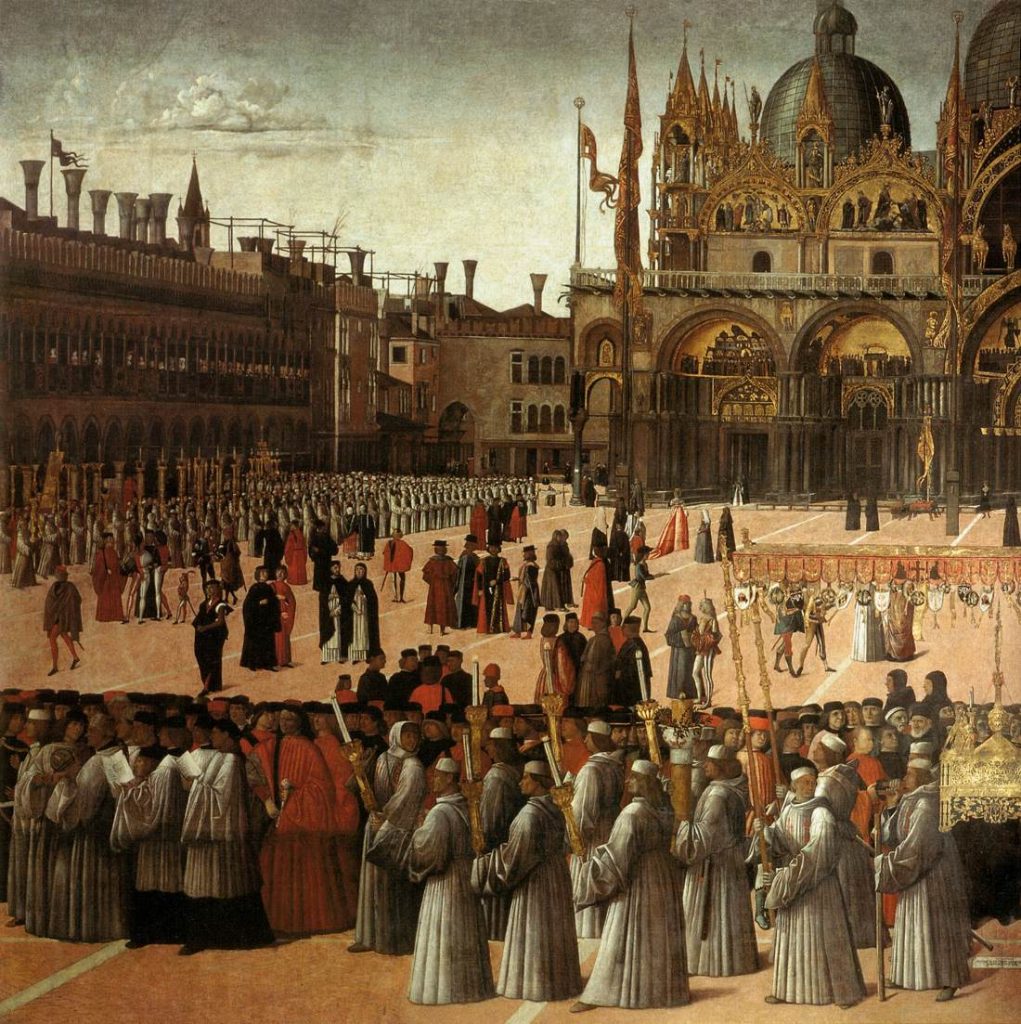 The Arts and Crafts Schools

The Schools of Arts and Crafts (or Scuole di Arti e Mestieri) brought together craftsmen and middle-class traders. Many of these minor schools associated with foreign workers- Albanians, Dalmatians, Greeks- who were helped materially and spiritually in difficult times with job placement in Venice. These entities protected the economic activity of the category by creating a network of protection and mutual help. Possibly similar to the modern union.

The Large Schools brought the patricians and the wealthy bourgeois together. At the time, they were unable to gain access to political power because those positions were reserved exclusively to Venetian nobles. They found a prestigious landing place within the offices of these schools. The government of the Serenissima never hindered the establishment and development of these schools because they were an outlet for the bourgeoisie and a source of income for the Republic since they collected taxes.

The schools were centers of power made up of the most important people in Venice who protected their specific interests (the lobbies of today) but also took care of helping the sick and the poor, dedicating themselves to charitable works. Their primary social function was both welfare and religious in nature.

Thanks to the large donations they received and the self-taxation of the confreres, the schools had a lot of liquid money that they invested in the construction and embellishment of their offices. The members of these lay brotherhoods were great patrons and art lovers and competed to guarantee the work of the best architects, painters, decorators, and craftsmen of the time (Tintoretto, Tiepolo, Jacopo Palma il Giovane, Bellini). 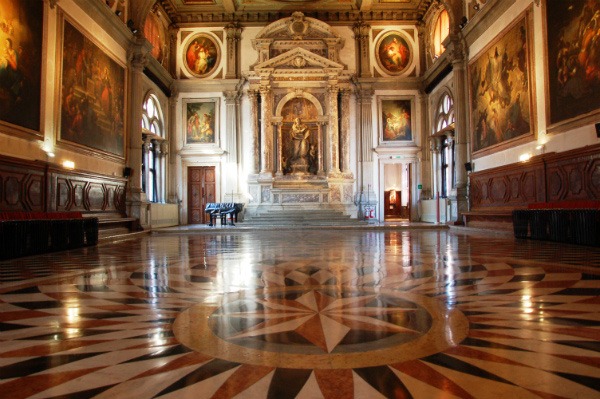 The schools’ seats were palaces with decorated facades and rich in a remarkable artistic heritage. In addition to the works of art, they also contained furnishings, sacred images, and relics which, unfortunately, were dispersed among art and antique dealers from all over the world with the fall of the Republic of Venice and with the Napoleonic invasion of the early 1800s.

At the fall of the Serenissima there were nine large schools, but only a few managed to preserve part of their artistic heritage:

The Carmini School – established in 1594 – in the Dorsoduro district 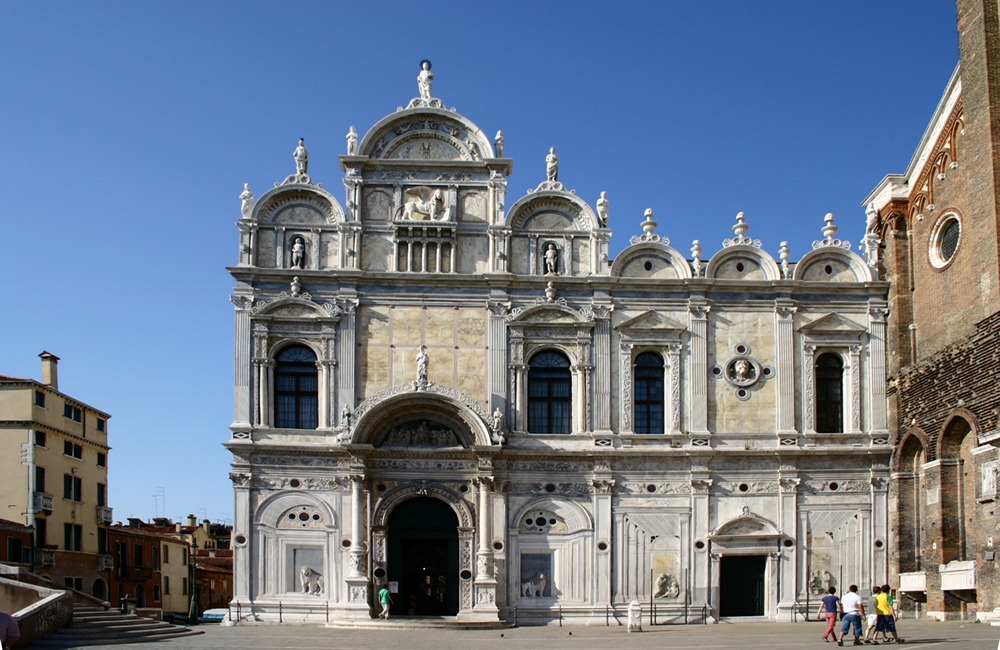 Not to be Missed:

The Scuola Grande di San Rocco or the Sistine Chapel of Venice is a must-see. American director Woody Allen, one of the greatest admirers of the city, set his film Everyone Says I Love You in Venice. A scene between Julia Roberts and Woody Allen takes place in the Scuola Grande di San Rocco, where the two talk about the protagonist’s passion for Tintoretto. These paintings make it comparable to the Sistine Chapel.

When these Scuole were reconstructed, there were very strict guidelines that they had to adhere to. All the buildings had to be equipped with two large rooms- one on the ground floor for religious ceremonies; one on the first floor for meetings.

Tintoretto was commissioned to decorate the rooms in Campo San Rocco in 1594 and set to work with his disciples and decorated the Sala Terrena with scenes from the Holy Scriptures and in the upper room, he illustrated stories from the Old Testament in about twenty scenes. In the Hotel Hall, he illustrated the last moments of Jesus’ life. 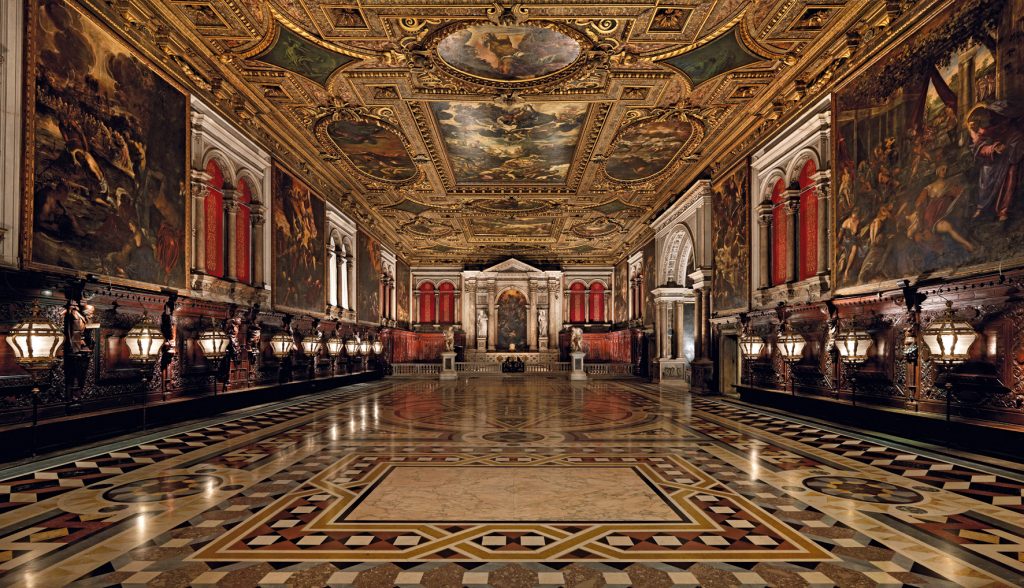 I could spend hours describing the masterpieces found within the Scuole by artists like Carpaccio, Bellini, and Tiepolo but I’ll leave you the pleasure of discovering them for yourself.

During the #StayHome / #IoRestoaCasa the Civic Museums of Venice are available to visit online!