Visiting the Asiago Plateau in the Veneto Region

Thanks to an unpredictable and fortunate turning point in my life, I had the opportunity to live in Asiago for almost a year. Asiago is the major town of what is known as the Altopiano dei Sette Comuni, or “the Plateau of the Seven Municipalities”. Although prior to moving here, I used to live just over 100 km from Asiago, I didn’t know much about this area and all it had to offer. I admit that I have literally fallen in love with it and am nostalgic about the time I spent there.

The Plateau of the Seven Municipalities

The Plateau owes its name to the 7 municipalities located here including Asiago, Roana, Enego, Foza, Gallio, Rotzo, and Lusiana Conco. Arriving by car from Vicenza at the top of the SP349, also known as the “Strada del Costo“, an undulating expanse of green meadows will appear before your eyes, dotted with villages each with its own bell tower. They look like nests lying on a velvet carpet. 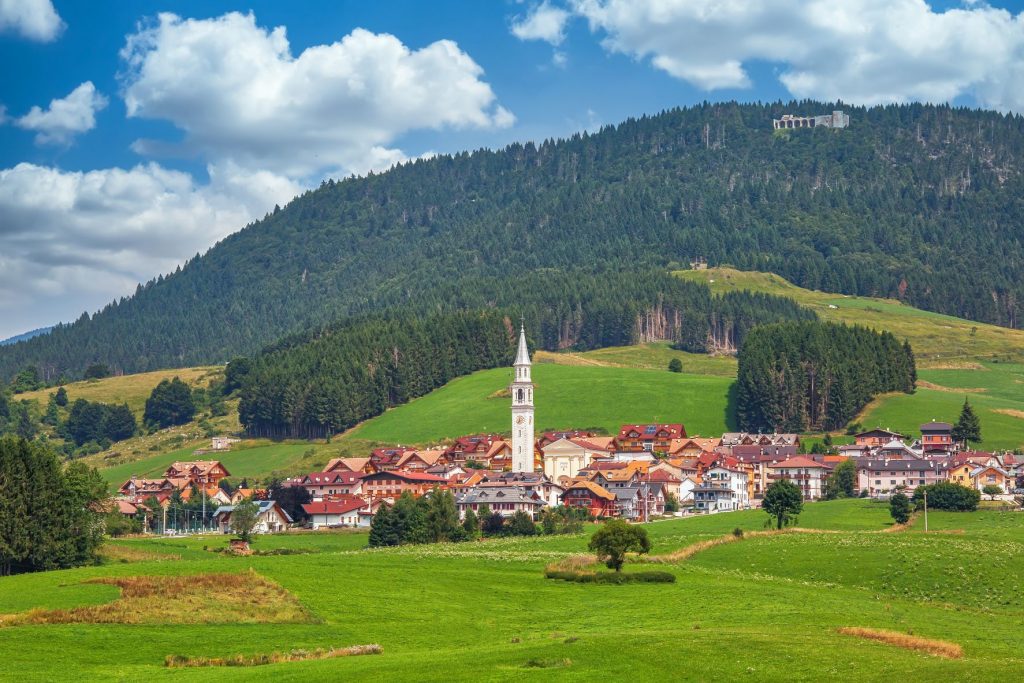 The plateau is located at an altitude of 1,000 meters (3,280 feet) making it ideal for just about everyone. Both in summer and in winter, it offers everything from the outdoors to entertainment, shopping, and culture.

In addition to its natural beauty, the plateau is also sadly famous for being the setting of the Great War. The territory is an open-air museum where you can visit the remains of forts, military barracks, trenches, and war cemeteries on foot or by mountain bike. All these places are inserted in the natural context of woods and paths. Just to name a few: Fort Corbin, Fort Interrotto, Fort Verena, and the English Cemetery. For those interested, you can also visit the Historical Museum of the Great War 1915 – 1918 in Canove di Roana.

For hikers, the possibilities are endless. The plateau’s valleys are scattered with huts surrounded by lush pastures of wild herbs of various species, a source of nourishment for the grazing cattle. With their milk, Asiago DOP cheese is produced as well as other varieties such as caciotta, tosella, and many other dairy products.

And if you love cheese and local products, don’t miss the event of the summer: 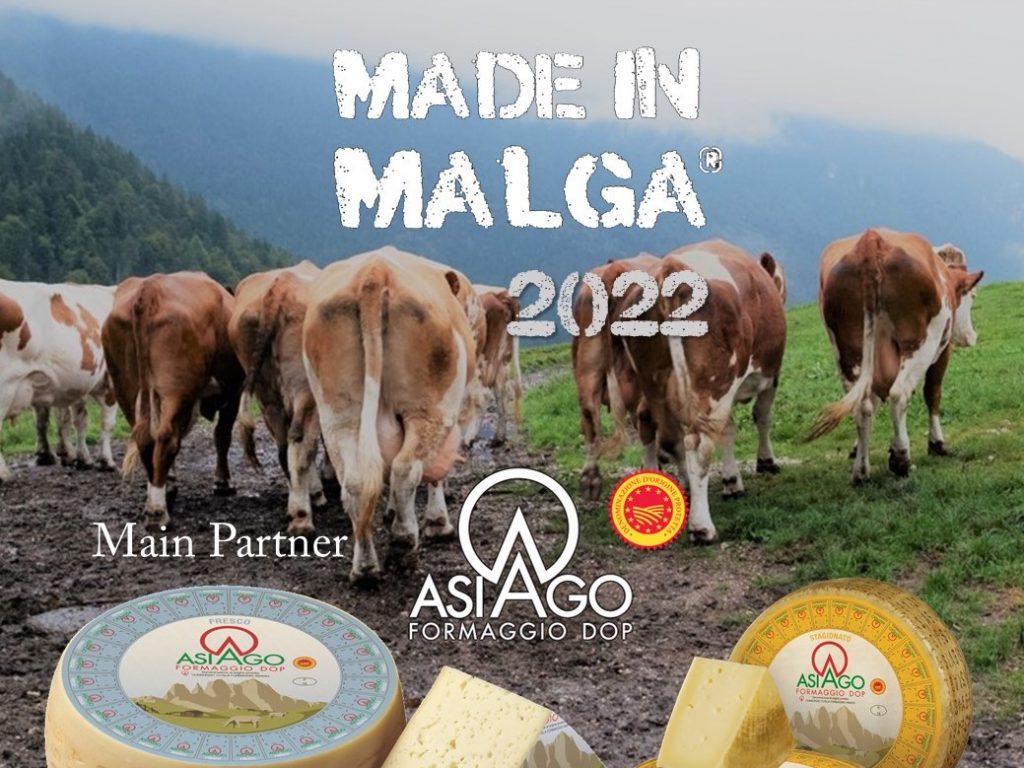 Made in Malga is a celebration of local products, especially cheese, that has been taking place for the past ten years.

In addition to the food market in the historic center of Asiago, workshops on cheese, craft beer, and wine are also offered as well as guided tours and themed dinners.

You can find out more about the event including the complete program at www.asiago.it.

Another way to explore the area is by bicycle; both mountain bikes and E-bikes can be rented on-site.
There is a route to suit everyone and every ability! Since it is a plateau, the bike paths are generally not very physically demanding.

In winter, these beautiful valleys turn into expanses of snow which can be enjoyed by simple strolls or winter sports.

Asiago is famous for cross-country skiing, and is often referred to as “the Norway of Italy”. It offers more than 500 km of perfectly prepared slopes, all well signed according to difficulty. Various cross-country ski areas exist such as Campomulo (in Gallio), Campolongo (in Rotzo), and the Asiago Golf Arena.

Let’s not forget about Val Maron, a true paradise for its cross-country trails, and Val Formica, also highly recommended for alpine skiing with its Portule Peak, Mandriolo Peak, and Porta Manazzo.
Another option is snowshoeing which is a much-loved sport on the vast plateau. 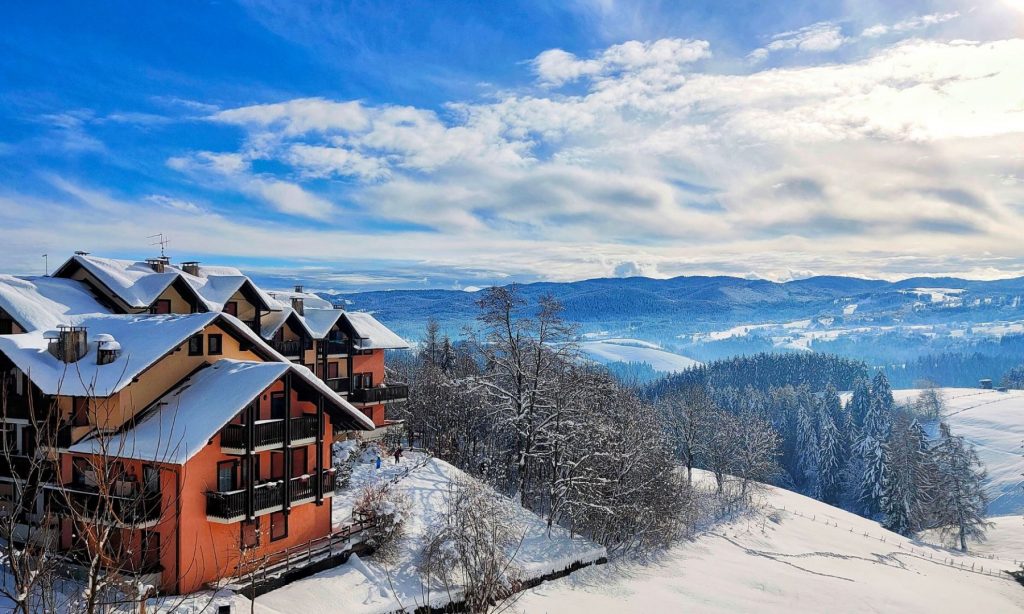 In Val Formica, there is also the Val Formica mountain refuge which has been completely renovated with a bar and restaurant and a large playground for children. Its sunny position is ideal for an enviable tan.

What more can I say?  I could go on talking about the Cimbrian civilization characteristic of the area or the Asiago plateau’s numerous other attractions, but I’ll leave the rest up to you when you visit.

Made in Malga photo: https://www.facebook.com/madeinmalga